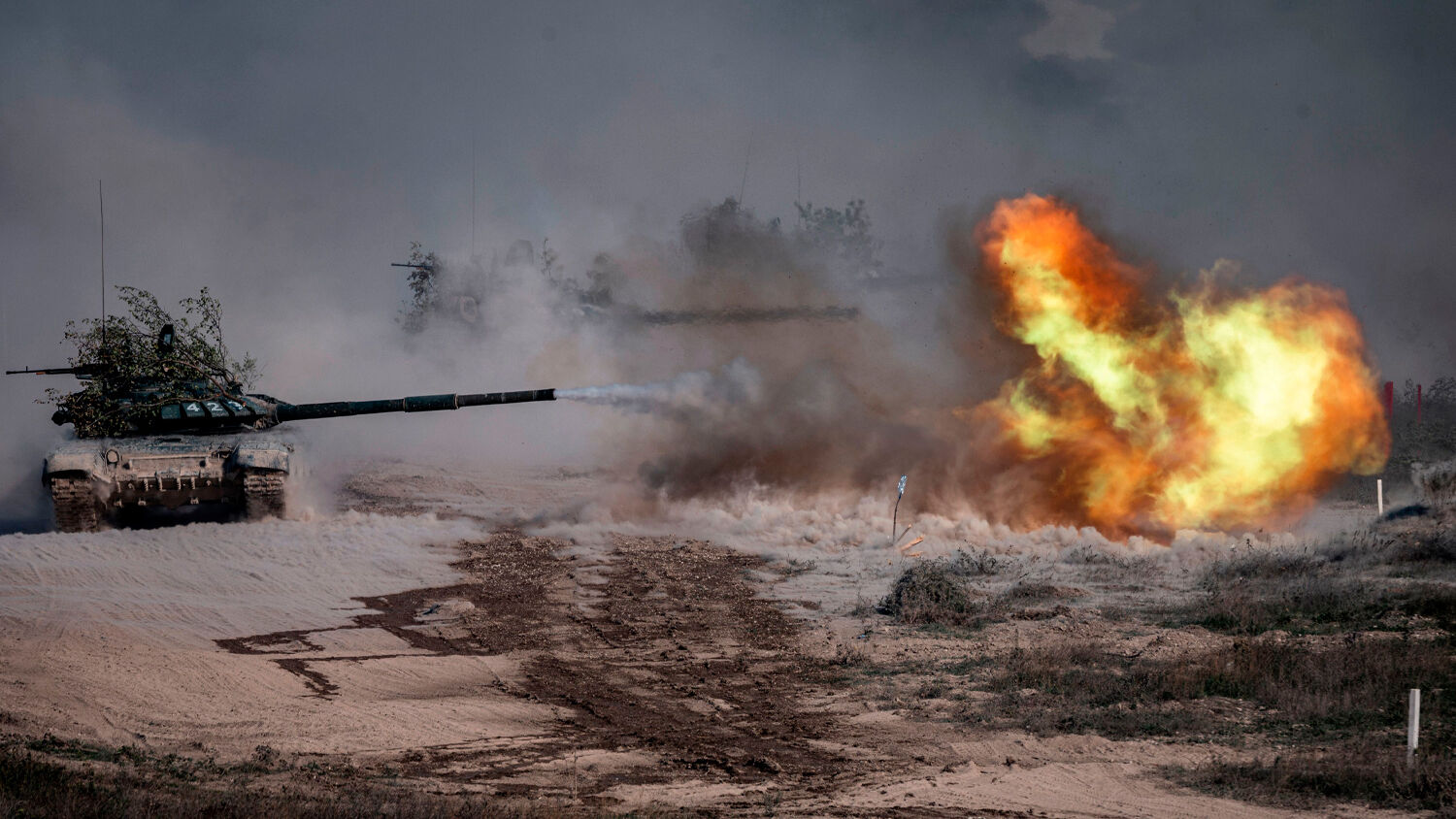 A Russian army T-72-B3 tank fires during military exercises at the Raevsky range in Southern Russia on Sept. 23, 2020, during the “Caucasus-2020” military drills gathering China, Iran, Pakistan and Myanmar troops, along with ex-Soviet Armenia, Azerbaijan and Belarus.
DIMITAR DILKOFF/AFP/Getty Images

The largest exercises, “Caucasus 2020,” took place in southern Russia and in the Black and Caspian seas from September 21 to 26, with Putin personally supervising part of the maneuvers. Joining Russian forces were contingents from Armenia, Belarus, China, Iran, Myanmar and Pakistan. The Russian Defense Ministry noted in an official statement that the massive land and naval exercises focused on encirclement and battlefield control, with a total of 80,000 involved.

Vasily Kashin, a Moscow-based military analyst, told the Trumpet on September 24 that “Caucasus 2020” is mainly focused on “training and checking command and control system.” Kashin noted that this year’s iteration of the exercises involved fewer soldiers than would have otherwise been the case “because of covid.”

Overlapping “Caucasus 2020” was another set of war games called “Slavic Brotherhood 2020.” These exercises involved some 900 Russian and Belarussian troops and lasted from September 14 to 25 in Belarus’s southwestern city of Brest. During these war games, Russia flew two supersonic Tu-160 bombers along Belarus’s border with the European Union.

Meanwhile, Russia announced on September 15 that all members of the Collective Security Treaty Organization would hold yet another set of drills in Belarus from October 12 to 16. This bloc brings the former Soviet states of Armenia, Belarus, Kazakhstan, Kyrgyzstan and Tajikistan together under Moscow’s leadership and is viewed as a tool of Russian power. These upcoming war games are intended to focus on preparedness and carrying out operations related to peacekeeping.

One detail certain to be noticed by European onlookers is that all three of these Russia-led war games include Belarus. It is possible that Putin intends this display of Russia-Belarus military cooperation as a show of support for Belarussian strongman Alexander Lukashenko. Many Belarussians are currently protesting Lukashenko after he rigged an election last month to stay in power. Last week, the EU followed the lead of the United States and Canada by rejecting Lukashenka’s inauguration.

By orchestrating military drills with Russian and Belarussian forces marching in lockstep, Putin is showing the West that he is unfazed by such announcements. However, Putin has wisely avoided taking a firm stance on either side of Belarus’s internal leadership dispute. This is because, whether Lukashenko withstands the pressure against him or is ousted by his opposition, Putin seeks to remain closely aligned with Belarus.

So the spate of exercises should be viewed less as a signal of unwavering support for Lukashenko than as a general show of Russian solidarity with Belarus. The message for Europe is that whatever happens between Lukashenko and the opposition, Russia will not let Belarus drift out of Moscow’s orbit one iota.

The Trumpet carefully watches Putin and his power within Russia and his influence over neighboring nations because of Bible prophecy.

Revelation 9:16 foretells of an Asian army that emerges at the end of this age to field an army of 200 million soldiers: “And the number of the army of the horsemen were two hundred thousand thousand: and I heard the number of them.” That is more troops than the total number of people even alive in a.d. 90, the time this passage was written.

Revelation 16:12 refers to this colossal force as “the kings of the east,” with the pluralized kings indicating a bloc of multiple Asian countries. Ezekiel 38 shows specifically which nations will make up this confederacy and gives details about its leadership: “And the word of the Lord came unto me, saying, ‘Son of man, set thy face unto Gog, of the land of Magog, prince of Rosh, Meshech, and Tubal, and prophesy concerning him” (Ezekiel 38:1-2; Young’s Literal Translation). Anciently, Rosh or Rus was the name of Russia, a fact recognized by the Jamieson, Fausset and Brown Commentary, Benson Commentary on the Old and New Testaments and other Bible sources.

Ezekiel 38 describes some of the military campaigns that will be carried out by this force that is led by the “prince of Rosh, Meshech, and Tubal.” Who is the “prince” steering this colossal army?

In the September 2014 issue of the Philadelphia Trumpet, editor in chief Gerald Flurry wrote:

By the time he wrote his 2017 booklet The Prophesied ‘Prince of Russia,’ Mr. Flurry was even more certain that Putin would personally fulfill this role. He wrote: “This world has a lot of authoritarian rulers. But Vladimir Putin is one we need to keep a particularly close eye on. His track record, his nationality and his ideology show that he is fulfilling a linchpin Bible prophecy. The time frame of his rule also shows that nobody else could be fulfilling the Ezekiel 38 and 39 prophecy. … I believe he is almost certain to be the ‘prince of Rosh’ whom God inspired Ezekiel to write about 2,500 years ago!”

To understand more about the role Putin’s Russia will play in end-time events, order your free copy of Mr. Flurry’s booklet The Prophesied ‘Prince of Russia.’