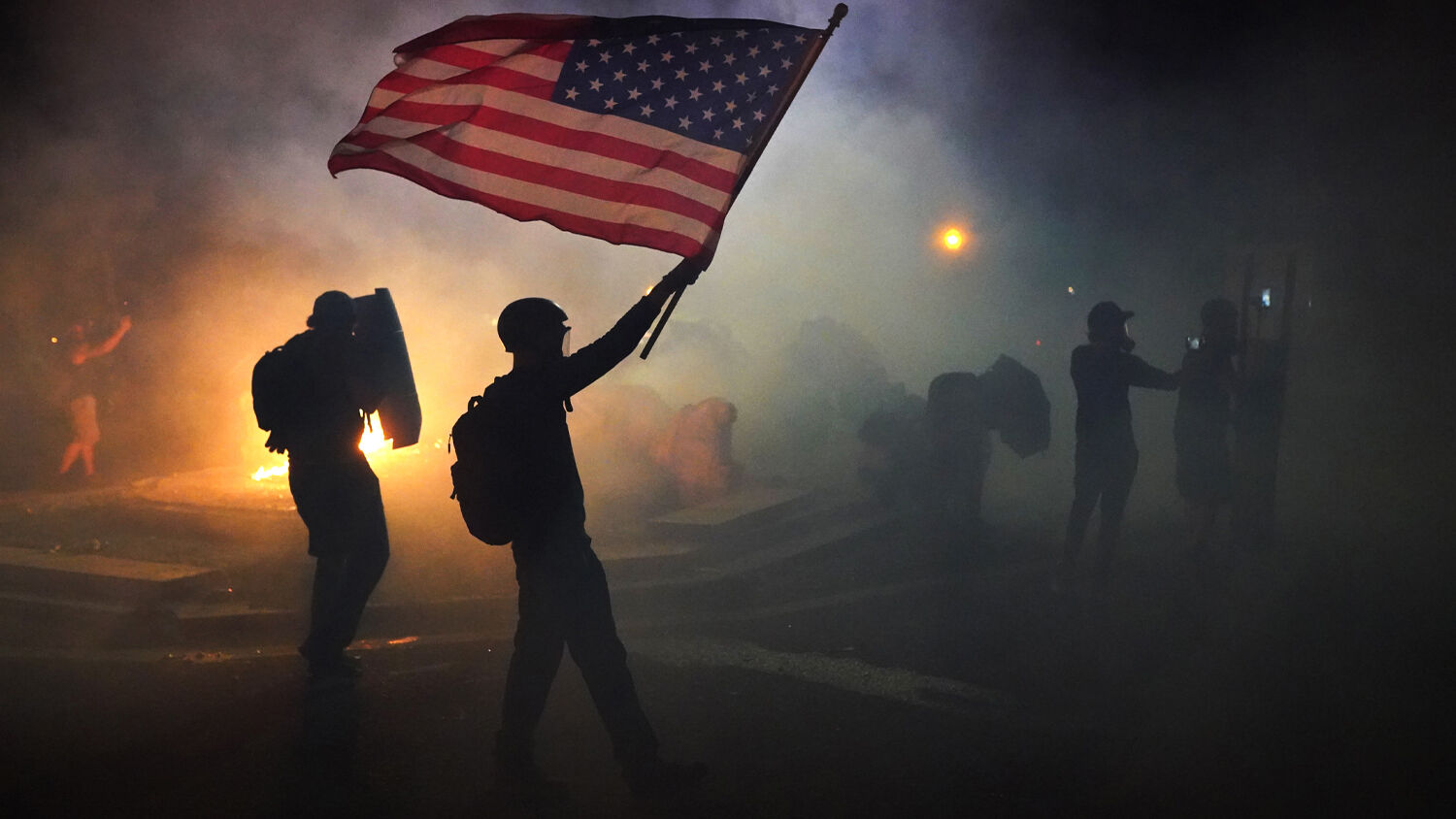 A protester waves an American flag while walking through teargas fired by federal officers during a protest in front of the Mark O. Hatfield U.S. Courthouse in Portland, Oregon, in July.
Nathan Howard/Getty Images

The campaign to defund the police is creating a crime wave in American cities.

The United States Department of Justice has labeled New York City, Portland and Seattle as “anarchist jurisdictions” that have failed to control violent riots while defunding local police departments. Attorney General William Barr released a statement on September 21 condemning these cities and threatening to cut off their federal funding if they did not take steps toward performing the basic function of government.

“When state and local leaders impede their own law enforcement officers and agencies from doing their jobs, it endangers innocent citizens who deserve to be protected, including those who are trying to peacefully assemble and protest,” stated Barr. “We cannot allow federal tax dollars to be wasted when the safety of the citizenry hangs in the balance. It is my hope that the cities identified by the Department of Justice today will reverse course and become serious about performing the basic function of government and start protecting their own citizens.”

By threatening to defund cities that refuse to use local resources to put down riots, the Trump administration hopes to incentivize law and order. If city officials in New York City, Portland and Seattle refuse to comply, their crime problems will undoubtedly get much worse as local police are cut off from even more funding.

The George Floyd riots have caused approximately $2 billion in damage, according to Axios, and up to 95 percent of these riots are linked to the Black Lives Matter organization, according to data collected by the Armed Conflict Location and Event Data Project. One of the Marxist organization’s primary demands is that cities defund their police departments, yet the only people benefiting from this demand are the criminals and looters.

The Bible foretold that such devastation would beset America’s cities. “They have blown the trumpet, even to make all ready; but none goeth to the battle: for my wrath is upon all the multitude thereof. The sword is without, and the pestilence and the famine within: he that is in the field shall die with the sword; and he that is in the city, famine and pestilence shall devour him” (Ezekiel 7:14-15).

This prophecy is addressed to Israel, but it was not delivered to Israel in Ezekiel’s day because 10 of the 12 tribes of Israel were already in captivity in Assyria. Ezekiel was a captive in Babylon, and God told him to write down his message for end-time Israel. The late Herbert W. Armstrong proved in his book The United States and Britain in Prophecy that the Anglo-Saxon peoples who settled the U.S. and Britain are the descendants of ancient Israel.

So this prophecy is about pestilence in America’s cities.

The word pestilence means destruction or death, so this verse is not necessarily talking about disease epidemics. It is talking about a plague of violence that will cause many health problems and ultimately lead to food shortages.

“Terrorist attacks, rioting and burning are the main thrust of the pestilence mentioned in Ezekiel 5,” writes Trumpet editor in chief Gerald Flurry in Ezekiel—The End-Time Prophet. “And this rioting will spread to other Israelite nations! God will get our attention one way or another. The worse the violence and burning become, the worse the famine will get. The worse the famine becomes, the more intense the violence will get. It becomes a vicious cycle.”

The “anarchist jurisdictions” of New York City, Portland and Seattle are the beginning of widespread anarchy that will consume America if its people do not turn to God. Verse 27 says these curses are designed to cause people to “know that I am the Lord.” Ezekiel 33:10-11 detail how badly God wants people to turn to Him.

“Therefore, O thou son of man, speak unto the house of Israel; Thus ye speak, saying, If our transgressions and our sins be upon us, and we pine away in them, how should we then live? Say unto them, As I live, saith the Lord God, I have no pleasure in the death of the wicked; but that the wicked turn from his way and live: turn ye, turn ye from your evil ways; for why will ye die, O house of Israel?” (Ezekiel 33:10-11). There is only one way that God will protect us. People must turn, turn, turn from our evil ways.

To learn more about what the Bible prophesies about the terrible problem of violence in America’s cities, please read Chapter 4 of Mr. Flurry’s book Ezekiel—The End-Time Prophet, “Terrorism and Race Riots.”