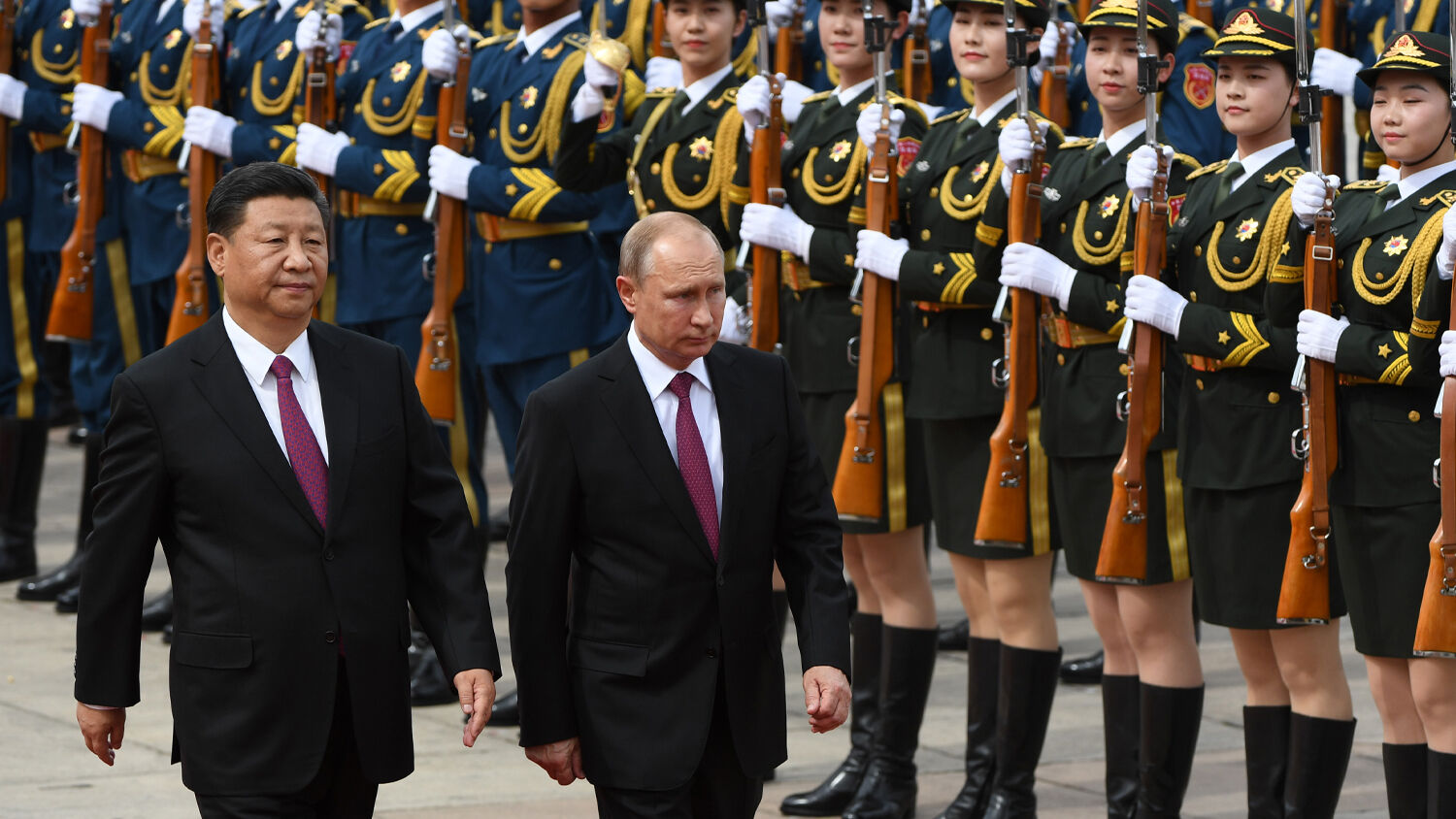 Russian President Vladimir Putin (center) reviews a military honor guard with Chinese President Xi Jinping during a welcoming ceremony outside the Great Hall of the People in Beijing on June 8, 2018.
GREG BAKER/POOL/AFP/Getty Images

Economic integration is paving the way to military union.

Russia and China will hold joint military exercises in southern Russia, the Russian Defense Ministry announced on September 10. Armenia, Pakistan, Belarus and several other Central Asian states will also be involved in the drills. These drills follow closely after last month’s announcement of Russia’s construction of an $11 billion polymer plant aimed at producing plastic for the Chinese market, the Wall Street Journal reported on August 18.

This is just the latest collaboration between Russia and China, signifying the ever strengthening military cooperation facilitated by growing economic ties between these former rivals and regional opponents.

Historically, the Soviet Union and China clashed because of ideological debates about the spread of communism worldwide. During the Cold War, China was against a perceived warmth by the ussr toward the West, facilitated by the policy of Mutually Assured Destruction. This went against China’s belief that there could be no peaceful coexistence between capitalism and communism.

Although relations between the ussr and the West eventually deteriorated, the chilly relations between Russia and China persisted. Suspicion between the two has been exacerbated by geography. Russia and China share more than 2,600 miles in land border. With both powers harboring ambitious designs of power, a spirit of competition between nations in such close proximity is expected.

For example, in 1969, Russia divided the 2,600 miles of shared border into 30 Soviet divisions. China responded with 59 of its own divisions.

There is still an element of competition and suspicion between them, as with any large powers. But they have been moving closer together.

A significant intensification of this relationship was marked by China’s near lone support of Russia following its annexation of Crimea in 2014. As the United States and European Union moved to punish Moscow for the move, China showed its support for Russia by agreeing to a $400 billion gas supply agreement.

The $55 billion Power of Siberia pipeline between Russia and China, commissioned in 2019, was believed to be the herald of a new era of cooperation between the two powers. At the time, former Central Intelligence Agency energy analyst Erica Downs said, “China and Russia joining forces sends a message that there are alternatives to the U.S.-led global order.”

The Power of Siberia now delivers 12 million cubic meters of natural gas a day, and Russian officials are looking to ensure an increase in the gas supply every year.

Russia and China are already working on a second pipeline, the Power of Siberia 2. It would considerably “facilitate gas infrastructure expansion throughout Eastern Siberia,” according to Alexey Miller of Gazprom, the state-owned Russian gas company behind the Power of Siberia.

The recently approved polymer plant is expected to produce 3 million tons of plastic a year for Chinese products ranging from plastic bottles to car parts. The plastic produced by the polymer plant, expected to be constructed beginning in 2024, will play a big role in the Power of Siberia 2, which is expected to triple gas delivery to China to 130 billion cubic meters a year.

That would make Russia a supplier of nearly 50 percent of all China’s gas needs.

“In less than a decade, we have seen a very significant growth of the trade relationship, and Russia now sees China as a huge market for its commodities, materials and goods,” said Artyom Lukin, of the Far Eastern Federal University.

Friction between Russia and China still exists. China’s expansion into Siberia is seen as a threat. Russia supplies Vietnam and India, China’s rivals, with advanced weapons. In June, Russia charged scientist Valery Mitko with “treason in the form of espionage” for passing classified information to China, according to his lawyer. The historical suspicions remain. And yet trade deals continue: Sino-Russian trade has not dipped below $100 billion since 2018, and both nations are actively pursuing de-dollarization.

Why does the Trumpet watch economic cooperation between Russia and China? Because Bible prophecy clearly shows that Russia and China, despite past differences, suspicions and disagreements, will be united in a massive military power bloc that will rival the greatest superpower on Earth.

Ezekiel 38 speaks of a powerful Asian bloc of nations led by Russia, with China in a secondary position. The Book of Revelation calls it “the kings of the east”—an end-time coalition with an army that numbers 200 million soldiers! This power bloc will usher in a period of violence and devastation unlike any before, “slaying the third part of men” (Revelation 9:15).

And the road to this military alliance is paved with economic cooperation.

Indeed, ever since Russia and China began increasing their economic cooperation, joint military ventures have increased. In 2018, China was invited into Russia’s far east for joint military drills, the first time a non-former-Soviet ally has been invited to Russia’s largest annual exercises. Both countries are aiding each other’s military advancements and modernization.

And it has all followed the establishment of warm economic cooperation between the nations. So an increase in economic cooperation between Russia and China is a harbinger for growing military cooperation. That is why it is so pivotal to watch this alliance, as it develops into the devastating power prophesied in the Bible. We must watch these events because “the end of all things is at hand” (1 Peter 4:7). Request your free copy of Russia and China in Prophecy; prove the prophecy, plainly laid out in your Bible, for yourself. God’s Word has all the answers we need to understand what we must do as these prophecies are being fulfilled.