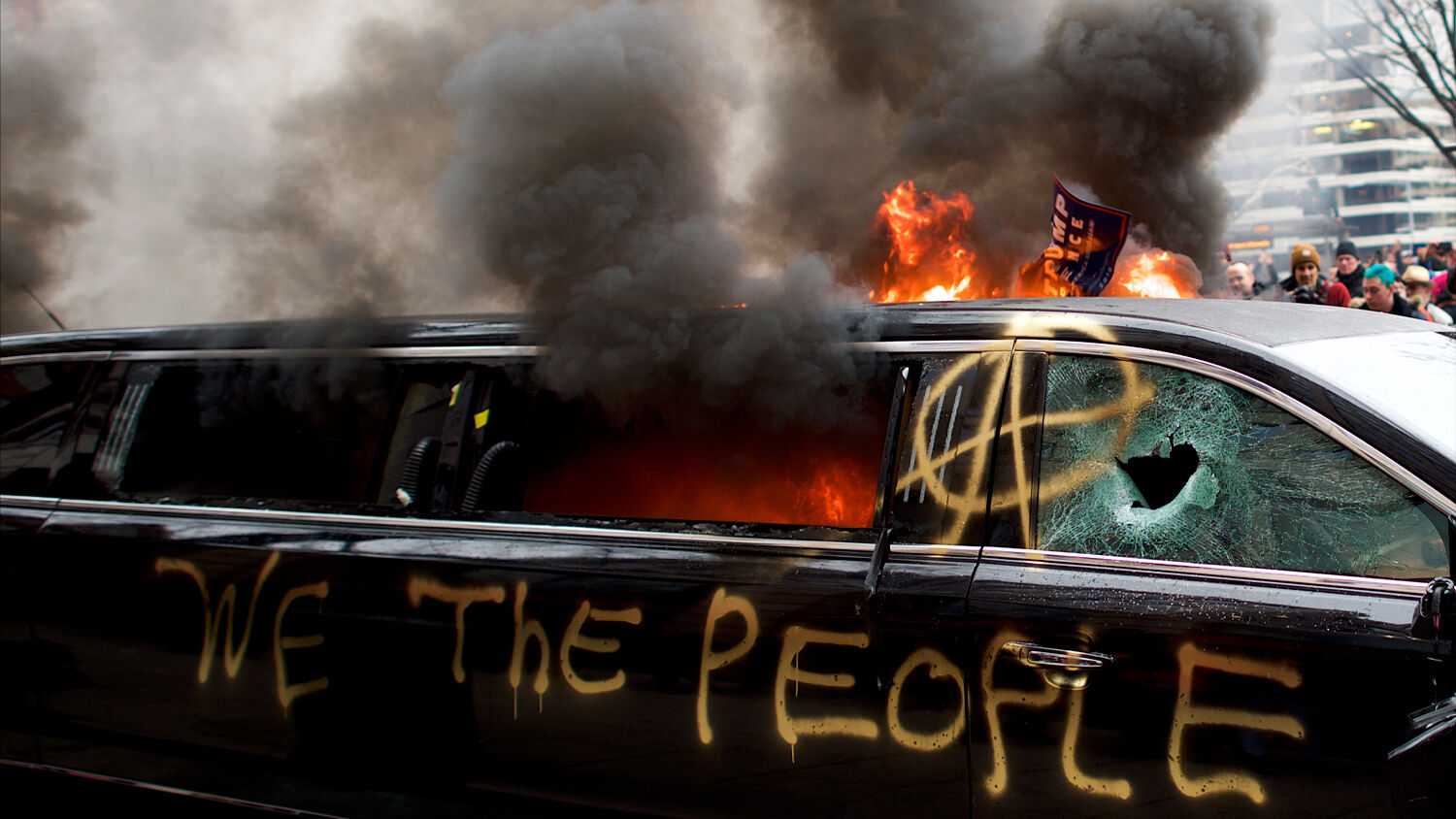 A limousine graffitied with “We the People” burns after the 2017 inauguration of Donald Trump as the 45th president of the United States.
Mark Makela/Getty Images

A progressive coalition predicts riots if Biden does not win by a landslide.

It is almost a foregone conclusion that there will be riots if Donald Trump is reelected as president of the United States. A coalition of progressives has been meeting to “game out” what happens if Joe Biden doesn’t win by a landslide. On September 8, the Daily Beast reported that a coalition dubbed the Democracy Defense Nerve Center met earlier this month to pore over a report titled “Preventing a Disrupted Presidential Election and Transition.” But this report was not truly about making sure that elections are free and fair.

The Democracy Defense Nerve Center held “war games,” with John Podesta, former chairman of Hillary Clinton’s 2016 presidential campaign, playing Biden. Three of the four scenarios enacted during these political war games ended in violence. The only scenario that ended peacefully was a landslide victory for Biden—ironic for a report alleging that Mr. Trump is the one who wants to steal the election. But the fact that politicians like Podesta are putting these scenarios forward as realistic possibilities show that the nation may be on the verge of a constitutional crisis and full-scale civil war.

Game #1: The first war game described in “Preventing a Disrupted Presidential Election and Transition” predicts no clear winner on election night. That means a 269:269 electoral college tie, or a Trump victory so slim that Biden refuses to concede until every mail-in ballot is counted. Analysts have called this a “red mirage” scenario, where Republicans appear to win on November 3, but Democrats “win” after mail-in ballots are harvested.

Since mail-in ballots are susceptible to fraud, the Transition Integrity Project predicts that Democrats may attempt to convince at least one electoral college elector to switch his or her vote to Biden in such a scenario—leading to a Biden victory. But it also predicts that Vice President Mike Pence could choose to reject this faithless elector, leading to a scenario where both Trump and Biden claim to be president on Inauguration Day.

(Since this political war game was played, the Supreme Court has ruled that electoral college electors must vote as the laws of their states direct. This makes faithless electors illegal and leaves recounts as the only way to fight back against a “red mirage” scenario.)

Game #2: The second war game predicts a clear Biden victory on election night. In this scenario, President Trump leaves office and there are no protests.

Game #3: The third war game predicts a repeat of the 2016 presidential election, where Donald Trump wins the electoral college but loses the popular vote.

The Transition Integrity Project predicts widespread rioting in this scenario. It also predicts that the Biden campaign may be able to convince California, Oregon and Washington to secede from the United States until Congress agrees to eliminate the electoral college. If the Democrats retain control of the House of Representatives and the Republicans retain control of the Senate, the response to this crisis would likely be divided.

The Democracy Defense Nerve Center predicts that this scenario will end with both Trump and Biden claiming to be the president of a country plagued by riots.

Game #4: The fourth war game predicts a Biden victory, but one where he narrowly wins with less than 51 percent of the popular vote. The Transition Integrity Project predicts that the Trump campaign may challenge the validity of mail-in ballots in this scenario. But Biden will organize protests across the country that will result in Republicans backing down and allowing him to take charge.

In more normal times, the idea of two people claiming to be president on Inauguration Day would seem like apocalyptic fiction. But the nation was rocked by #NotMyPresident protest after Donald Trump won the 2016 presidential election, and political division in America has since deepened. A Rasmussen poll conducted on June 11 and 14 indicated that 34 percent of registered U.S. voters believe that a civil war is “likely” within the next five years.

This civil war may not unfold the way John Podesta predicts, but the Bible reveals that it will soon happen.

Some 2,500 years ago, God revealed an end-time prophecy to a Jewish slave named Ezekiel. “Moreover he said unto me, Son of man, eat that thou findest; eat this roll, and go speak unto the house of Israel” (Ezekiel 3:1). This prophecy is addressed to “the house of Israel.” It was not delivered to Israel in Ezekiel’s day, because 10 of the 12 tribes of Israel were already in captivity in Assyria (Ezekiel was a captive in Babylon). Yet God had Ezekiel write down His message to Israel, foretelling of a future time when famine and war would devastate the cities of a rebellious Israelite nation.

This passage describes cities being laid waste “because of the violence of all them that dwell therein.” This is describing a civil war that escalates into a foreign invasion.

In Ezekiel 5, God reveals that one third of the nation’s population will die from the pestilence, famine and violence that result from the civil war.

“The pestilence, or plague of violence, will cause many health problems that lead to famine,” Trumpet editor in chief Gerald Flurry writes in his book Ezekiel—The End-Time Prophet. “Sewage disposal will be disrupted. Gas lines will be broken. Jobs will be lost. Society will unravel and the collective panic will bring a stock market disaster! It will get so bad that violence and famine will take millions of lives!”

Such devastation has never occurred in an Israelite nation from the time of Ezekiel until now. This is an end-time prophecy about the United States.

How could a dramatic prophecy like this be fulfilled? How could the most powerful and prosperous nation in human history fall to such a terrible fate? One of the major reasons Americans are clashing with one another is over the issue of government control. By definition, socialism directly opposes limited government.

The clash between the two ideologies is leading to a violent revolution. But the fundamental reason this is happening is not that President Trump is a “fascist,” as many leftists claim. Nor is it because of too few Republican voters. The reason is that the American people as a whole have turned away from God’s law.

To learn why election violence is a harbinger of civil war, and to learn how God will restore America to greatness after its people finally turn to Him and repent, read Great Again, by Gerald Flurry.