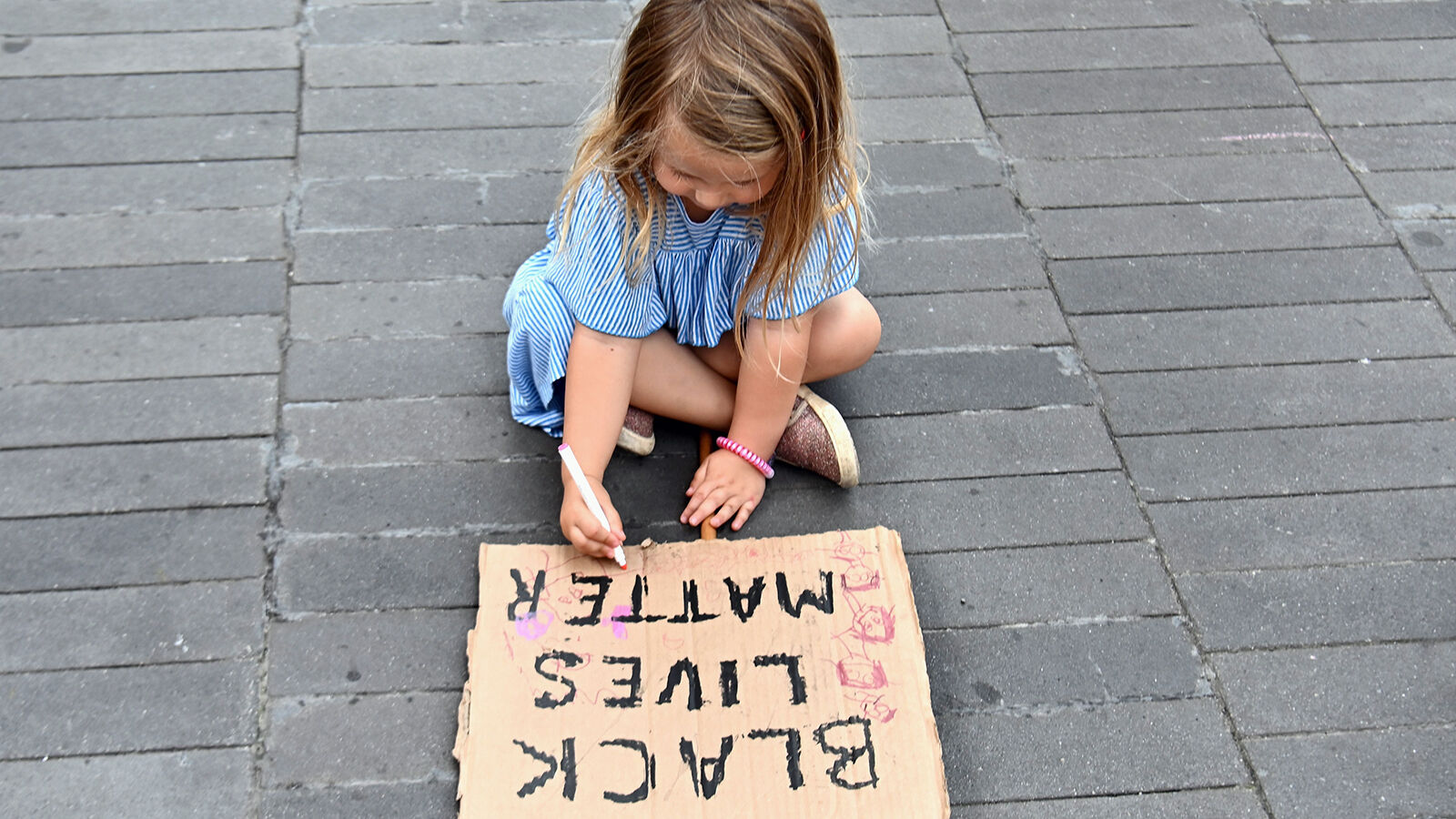 A child decorates a sign as families participate in a children’s march in solidarity with the Black Lives Matter movement on June 9, 2020 in the Brooklyn Borough of New York City.
ANGELA WEISS/AFP via Getty Images

Radical socialists are using the cover of a campaign against racism to sneak communism into American schools.

Among these documents is an assignment to memorize the Black Panthers’ Ten-Point Program, a program that calls for a government-guaranteeing income, reparations for African-Americans, and confiscating white-owned land.

The documents also include instructions on how to talk to preschool children about the 13 guiding principles of Black Lives Matter, including “the disruption of Western nuclear family dynamics and a return to the ‘collective village’ that takes care of each other.” That means teaching children that the nuclear family model of a married man and woman raising children needs to be replaced with a new system in which children are collectively educated by the state.

Among the recommended reading resources are “Heather’s Moms Got Married,” a Rethinking Schools article on how to teach second graders about homosexual “marriage”; and “Open Secrets in First-Grade Math: Teaching About White Supremacy on American Currency,” about how U.S. coins tell the story of wealthy, white, male America.

One anonymous California teacher told Beck how shocked she was to learn that her mandatory training included material on “Critical Race Theory,” a Marxist theory developed in the 1980s that argues data, facts and even the scientific method are “inherently racist” expressions of white supremacy. She said the California Department of Education, the California School Board Association, and the Association of California School Administrators endorsed this training. (One math education professor in New York City, steeped in this Critical Race Theory, recently claimed that the equation 2+2=4 “reeks of white supremacist patriarchy.”)

The document trove also contained poems from Assata Shakur, an African-American activist of the Black Panther party who sought asylum in Communist Cuba after killing a New Jersey state trooper.

The New York City Department of Education has announced that its schools will be combating “systemic racism” in the United States by tackling police brutality and white privilege in the classrooms. Even if you agree with that agenda, Black Lives Matter lesson plans are going to teach students about a lot more than racism. North Carolina’s largest school system in Wake County launched a website this summer holding up Black Lives Matter cofounder Patrisse Cullors as a role model for children. Cullors has described herself and her fellow organizers as “trained Marxists.” She has boasted about receiving training from Eric Mann, a former member of the Weather Underground—a Maoist terror cell responsible for multiple bombings at the U.S. Capitol, the State Department, and the Pentagon during the 1960s and ’70s.

You do not have to look too close to see that Black Lives Matter is not really about protecting black lives. It is a Trojan horse constructed to sneak communism into American schools under the cover of anti-racism. In fact, this movement is far worse than communism, as it seeks to dismantle nuclear families and the biological realities of gender!

“It isn’t surprising that Black Lives Matter [blm] is a Communist organization—but the type of communism they subscribe to is,” wrote Thurston Powers in the Federalist. “They are conservative Communists attempting to fold the progressive movement back into traditional Marxism. … The policy platform proposed by blm … calls for collective ownership of resources, banks and businesses, a highly progressive income tax, a guaranteed minimum income, and government jobs are lifted straight from the pages of Karl Marx’s Communist Manifesto.”

To date, the ideology laid out by Karl Marx in the Manifesto is responsible for the brutal murder of more than 100 million people. Supporters of Marx will argue that these numbers are exaggerated, or that these murders only occurred because evil men hijacked Marx’s ideology. But you do not have to know much about Marx to know that these brutal deaths were an inevitable consequence of what Marx’s ideology does to a nation.

Marx wrote in the Communist Manifesto that communism “abolishes all religion and all morality.” And in his poem “Feelings,” he expressed a tremendous thirst for destruction: “Worlds I would destroy forever, since I can create no world.”

Despite being atheists, both Marx and his friend Mikhail Bakunin praised Satan as a literary symbol of revolt against divine authority. Biographer Robert Payne wrote that Marx “had the devil’s view of the world, and the devil’s malignity. Sometimes he seemed to know that he was accomplishing works of evil.” His stanza, “Worlds I would destroy forever, since I can create no world” should have been the subtitle of the Communist Manifesto.

Like Satan, Marx promises a utopian society where everyone is equal to God in authority, but it delivers only the worst form of tyranny where the strong rule those weaker than themselves—without mercy and unrestrained by any law.

The late theologian Herbert W. Armstrong warned in a January 1949 Plain Truth article, “The Plain Truth About Communism,” that communism would be a tool of the devil to blot out America’s blessings. The fact that public schools across America are adopting the curriculum put together by Black Lives Matter is a sign of just how close socialist revolutionaries are to destroying America’s system of government. To understand the biblical significance behind society’s radical shift left, read Trumpet editor in chief Gerald Flurry’s free reprint article “Communism in America Today.”