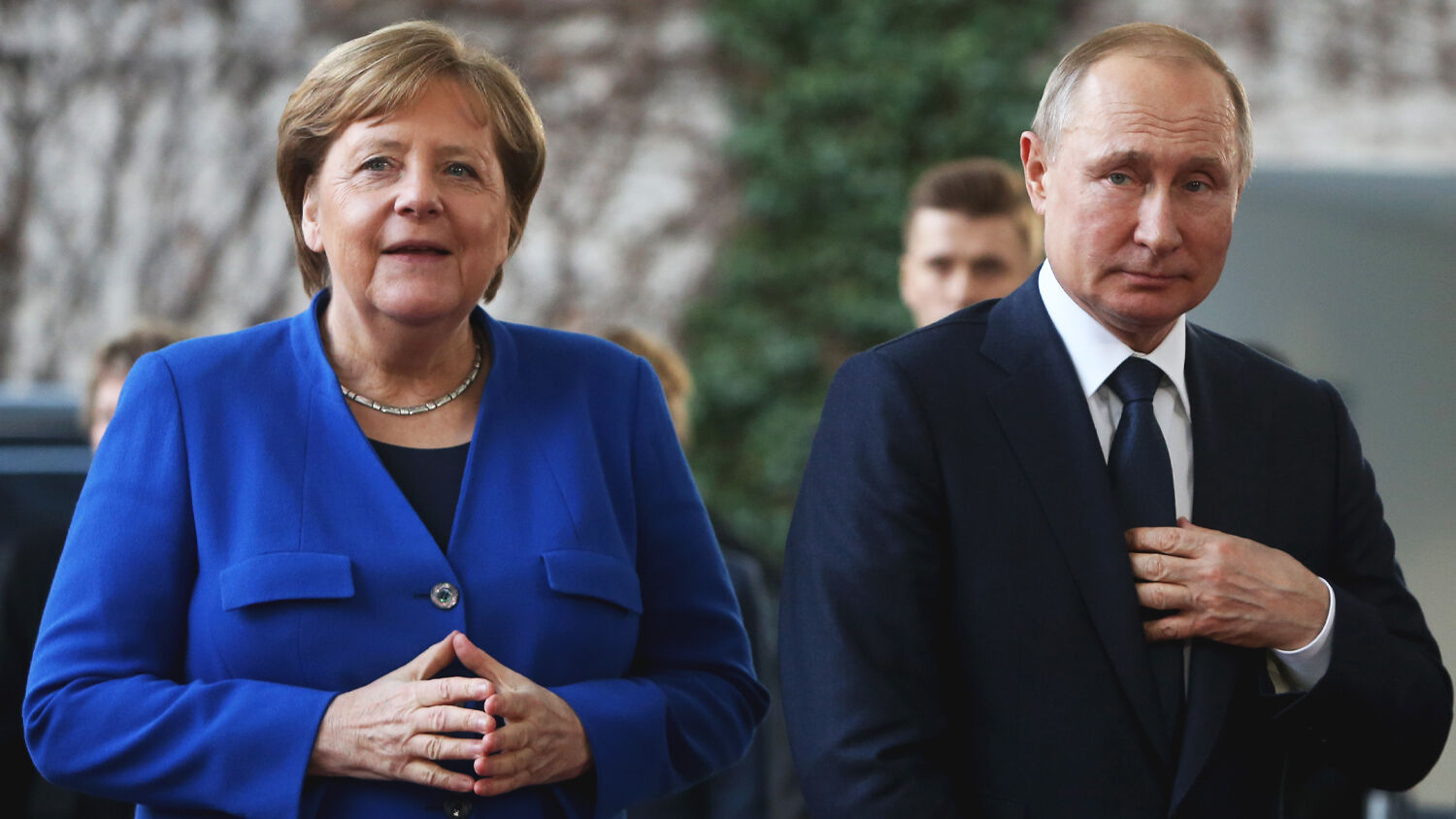 The Nord Stream 2 pipeline is coming under attack.

Germans are talking about the alleged poisoning of Russian political critic Alexei Navalny. This is not the first time Russian President Vladimir Putin’s regime has been suspected of attempted murder. But this time it comes at a turbulent time in German politics. More people are questioning Germany’s partnership with Russia, particularly regarding its major Nord Stream 2 pipeline project.

German doctors announced that the poison used on Navalny, an outspoken critic of Putin, was Novichok. Novichok is a military-grade poison developed by the Soviet Union during the Cold War. If this poison was indeed used, it is almost certain that Putin’s government not only attempted to kill Navalny, but also wanted the world to know it.

A number of senior German politicians have called for Germany to retaliate against Russia.

Nord Stream 2 has not been a popular project, domestically or internationally. United States President Donald Trump ordered sanctions against Nord Stream 2 in 2019. And now German politicians themselves are struggling to defend the project. The head of the German parliament’s foreign affairs committee, Norbert Roettgen, said, “The [European Union] should jointly decide to stop Nord Stream 2.” Many others have made similar statements.

German commentators are also demanding that the government halt the project. Bild, Germany’s best-selling newspaper, said that if the government does not stop the pipeline, it will be “tantamount to us financing Putin’s next Novichok attack.”

President Trump has been criticizing the Nord Stream 2 pipeline for years. He said in 2018: “I think it’s very sad, when Germany makes a massive oil and gas deal with Russia, where you’re supposed to be guarding against Russia, and Germany goes out and pays billions and billions of dollars a year to Russia. Germany is totally controlled by Russia, because they will be getting from 60 to 70 percent of their energy from Russia and a new pipeline. And you tell me if that’s appropriate, because I think it’s not, and I think it’s a very bad thing for nato and I don’t think it should have happened.”

Yet the German government brushed the criticisms aside and continued the project. The partnership has certainly never been contingent on moral concerns.

Vladimir Putin has been accused of poisoning opponents for more than 15 years.

Yet in 2005, Putin had already sealed the deal on the first Nord Stream pipeline. At the time, he met with then Chancellor Gerhard Schröder and Angela Merkel, who won Germany’s national elections that year. Schröder agreed to the construction of the pipeline just before leaving office, and Merkel continued to support the project. In the September 2018 Trumpet magazine, editor in chief Gerald Flurry wrote:

Gerhard Schröder, Chancellor Merkel’s predecessor, was a vocal advocate of the Nord Stream pipeline project. In 2005, just after he had been voted out of office but before he had officially left the post, Schröder hastily signed the Nord Stream agreement.

That is an ugly thing for a politician to do. He knew the people had already voted him out, yet he decided to set this project in motion. This indicates what is happening with this German-led European power: It is being hijacked by leaders who don’t always act in their people’s interests!

These leaders don’t like America and want to befriend Russia. Apparently they respect the authoritarian way Russia accomplishes its goals.

Many have argued that Germany should deal with Russia to preserve its energy security at a reasonable price. But Germany’s Die Welt noted in “The Myth Surrounding the Indispensable Pipeline” (Trumpet translation throughout):

There is an alternative to fill the gap, namely liquefied petroleum gas (lng). Natural gas is liquefied by strong cooling and therefore has a significantly smaller volume. It can be transported on ships across the oceans and thus traded globally. Numerous lng landing stations have been built in recent years, and there are now 36 in the EU. Now, as is well known, the U.S.A. absolutely wants to stop Nord Stream 2 and has threatened massive sanctions. The country is often accused of fighting the pipeline only out of self-interest—to sell more of its own liquid gas. That is certainly one of the reasons behind the great interest shown by U.S. senators in the distant pipeline. But the U.S.A. would just be one of several suppliers.

Important suppliers for lng are Australia, Qatar, Trinidad and the United States. But German leaders are more willing to make major, morally questionable, domestically unpopular and internationally criticized deals with Putin’s Russia than with the U.S. Germany, in fact, is becoming increasingly critical of the U.S.

Why this seemingly illogical and perhaps unstoppable development? There is more behind the Nord Stream 2 pipeline than most understand. Mr. Flurry noted in the September 2018 Trumpet issue:

For years, Germany has been criticized for the Nord Stream projects, but it pays no attention and presses ahead. This shows Germany is uninterested in relying on nato anymore. President Trump exposed this in public and criticized Merkel. …

Many elite Germans feel their nation has now gotten all it can from the U.S. and they are ready to move on. Some powerful Germans today are thinking more and more about the Holy Roman Empire, and they want modern Germany to assume more power of its own in the spirit of that empire. They want to establish Europe as a mighty, German-led superpower.

For years, Germany has benefited from the nato military alliance. But nato was originally designed to prevent both Russia and Germany from controlling the European continent.

These Germans know that nato is an obstacle to their goal. Back when nato was first founded, its first secretary general, Hastings Ismay, explained its main purpose: “Keep the Russians out, the Americans in, and the Germans down.” The notion of keeping “the Germans down” directly contradicts the imperialistic ambitions that are growing more intense among many elite Germans today. …

President Trump said Germany will end up being “totally controlled” by Russia as a result of this gas pipeline deal. And Germany is taking a risk with a dangerous dictator. But this deal will boost more than just Russia’s power and leverage. It will also boost Germany’s. Germany has much to gain from this. And it will happen in a way that hurts many other nations!

Vladimir Putin leads one of the most powerful and dangerous nations in the world. The fact that Germany continues to cooperate with Putin makes him all the more dangerous.

Are Germany and Russia actively undermining American power? The Bible reveals that this is, in fact, happening right now—and it will only get worse.

God blessed America like no other single nation as a fulfillment of His promises to its ancient ancestors, the Israelites (read The United States and Britain in Prophecy, by Herbert W. Armstrong). But like the Israelites, Americans have turned from God and refused to believe and obey Him. Time and again through Israel’s history, God has pleaded with His people to repent. Time and again, the Israelites have refused—and suffered terrible consequences. God is again warning His national people. But time is running out.

Germany’s cooperation with Russia is a clear sign that the world is about to enter what Jesus Christ described as the Great Tribulation (Matthew 24:21). The Bible reveals surprisingly detailed specifics about this time of suffering. The nations that will unleash much of the destruction on the world are rising now.

To understand how the future will unfold—and to find the hope hidden beneath it all—read “Germany and Russia’s Secret War Against America” and The Prophesied ‘Prince of Russia’ by Trumpet editor in chief Gerald Flurry.