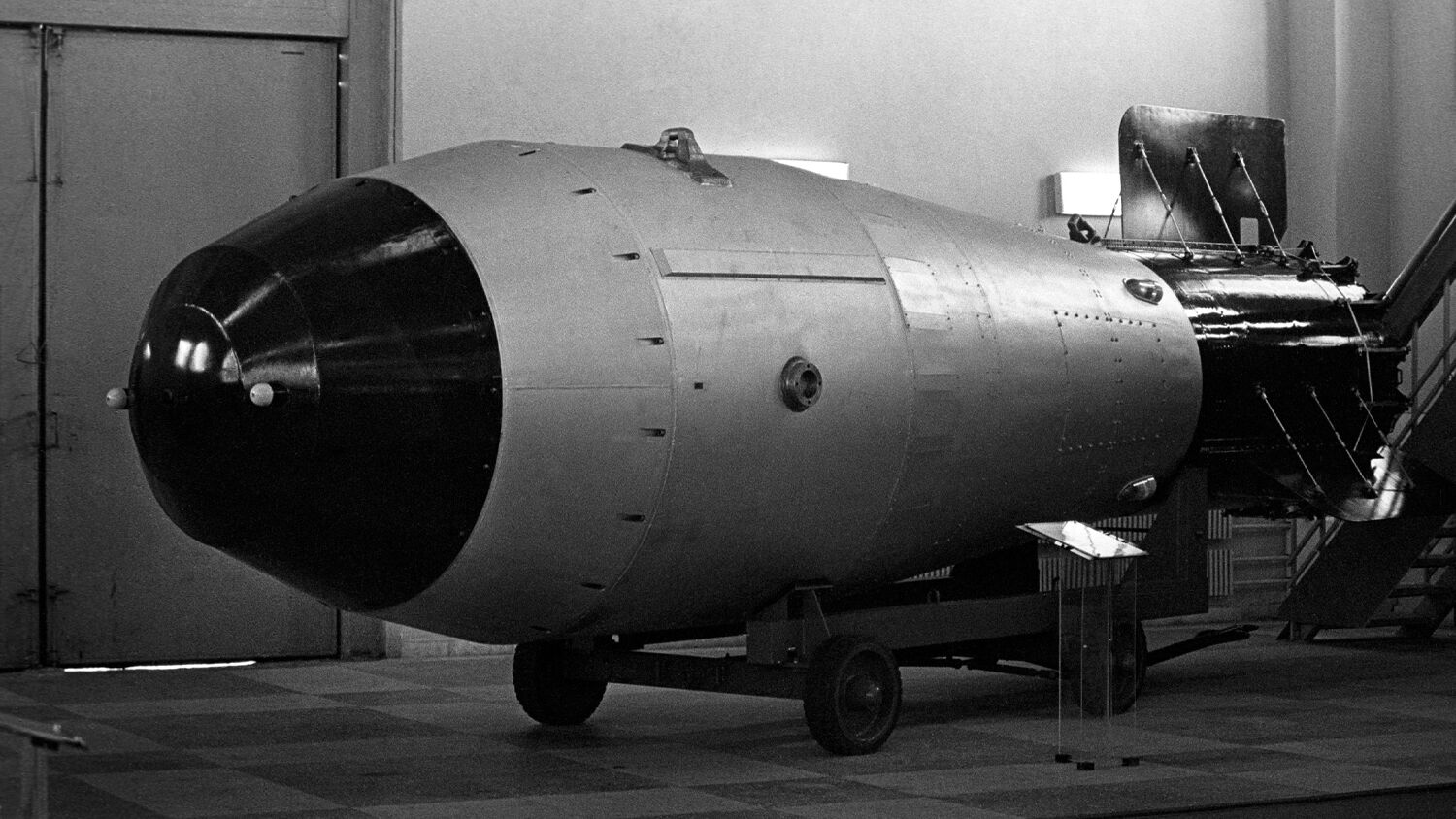 After 6,000 years of history, humanity has finally found a way to kill every human being on the planet.

The most powerful thermonuclear device ever detonated was called the Tsar Bomba. When it was tested over Severny Island on Oct. 30, 1961, this Soviet rds-220 hydrogen bomb exploded with a force over 3,000 times greater than the blast that leveled Hiroshima, Japan. Onlookers saw a flash more than 600 miles away, and the bomb’s colossal mushroom cloud reached up 40 miles high—almost touching the edge of outer space.

No explosion has come close to matching the Tsar Bomba’s destructive power. And now people can see the devastation unleashed by history’s most powerful thermonuclear device for themselves. Last week, Russia’s state atomic agency released 40 minutes of classified footage about the Tsar Bomba, from manufacture to detonation. The countdown to detonation begins at the 22:20-minute mark of the YouTube documentary.

Soviet Premier Nikita Khrushchev commissioned a 100-megaton weapon, but his physicist convinced him to settle for a 50-megaton bomb after noting that a 100-megaton nuclear weapon may cause global fallout.

If the Tsar Bomba had been dropped on New York City, instead of on a remote Arctic island, half of Brooklyn would have been incinerated in a 7-mile-wide fireball. Every building in the greater New York City area would have been flattened by the high-pressure airburst emanating from this fireball. People 50 miles away in Trenton, New Jersey, would have suffered third-degree burns from a radiation wave engulfing an area larger than the state of Connecticut. Over 7 million would have died, and millions more would have been injured.

The newly released footage of the Tsar Bomba’s detonation is a sobering reminder that after 6,000 years of human history, scientists have finally found a way to kill every human being on the planet. Few people are as concerned about nuclear war today as they were in 1961—when the Tsar Bomba was detonated. But the threat of nuclear war today is higher than it has been in years. There are 14,000 nuclear warheads on the planet today, and authoritarian dictators and mentally unstable madmen control many of them.

In his recent article “Do Not Fall Asleep to Nuclear Danger,” Trumpet editor in chief Gerald Flurry warned, “The Bible prophesies that many of the 20,000 nuclear bombs on the planet today are going to be used. … God’s prophets knew man had to face his own sins. The Prophet Habakkuk wrote about nuclear winter. He discussed a ‘bitter and hasty nation’ attacking Israel (Habakkuk 1:6-17). The people are treated like fish in a net. They are shown no mercy. That is not the worst part though. ‘When I heard, my belly trembled; my lips quivered at the voice: rottenness entered into my bones, and I trembled in myself, that I might rest in the day of trouble: when he cometh up unto the people, he will invade them with his troops’ (Habakkuk 3:16). He wrote about ‘the day of trouble’ for the modern nations of Israel—which include the United States and Britain. His main vision was about the end time, not during his life. Habakkuk had never envisioned anything so completely terrifying! It was the ‘great tribulation’ about which Jesus Christ Himself prophesied! (Matthew 24:21).”

If you’ve fallen asleep to nuclear danger, Russia’s declassified footage of the Tsar Bomba detonation will make Gerald Flurry’s warning more real in your mind. This is a hard message to receive, but Mr. Flurry’s free booklet Nuclear Armageddon Is ‘At the Door’ explains what Jesus Christ Himself prophesied about nuclear war!