The world waits to see whether Jews or Arabs will control the Holy Land. But is anyone watching the Vatican? 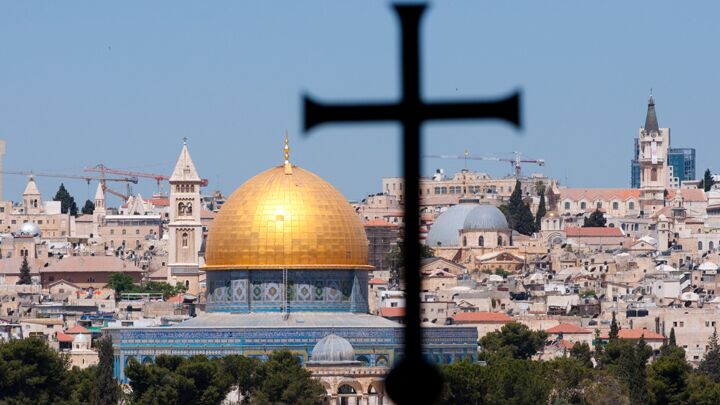 The world waits to see whether Jews or Arabs will control the Holy Land. But is anyone watching the Vatican?

From The May 2006 Philadelphia Trumpet
View Issue FREE Subscription 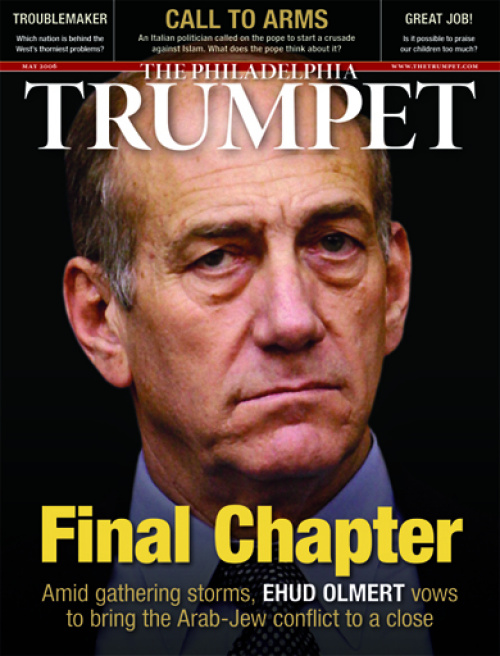 If any place has a history of blood, it is the “city of peace.” Jerusalem is famous because it contains the holiest sites on the planet, sites that have ignited the most protracted wars ever. Some might even say the war for Jerusalem has never ended since the time of the Crusades.

Observers mostly focus on the Arab Palestinians and the nation of Israel—and understandably so. Right now, with a newly elected Hamas running the Palestinian government, and a new Israeli administration bent on forcing the situation to a solution by 2010, the battle for Jerusalem is about to become active again.

But what about the instigator of the original Crusades—the religious behemoth that fought for hundreds of years for Jerusalem? Has that power simply given up on reclaiming the Holy Land? Will it stand idly by while Jerusalem is fractured between Arab and Jew? Quite the contrary. In fact, the Vatican believes it still holds claim to Jerusalem even to this very day.

During the year 2000 millennial celebrations, Pope John Paul ii asked the world for “pardon” for the Crusades. He also apologized for past “errors of the church”: the Inquisition and anti-Semitism. This effort to rehabilitate Muslim-Christian relations irritated many Vatican conservatives—including, according to some, then-Cardinal Joseph Ratzinger.

In stark contrast to John Paul’s apology, the Vatican has now sponsored a conference that “portrays the Crusades as wars fought with the ‘noble aim’ of regaining the Holy Land for Christianity” (Times, London, March 20). One speaker at the mid-March symposium held at a pontifical university in Rome asserted that the crusaders were “inflamed by an ardor for charity and a love of God” (ansa, March 20).

Although the gory conflicts in the Middle Ages between European Christians and Middle Eastern Muslims are often labeled the “Christian Crusades,” we should understand that they were uniquely Roman Catholic. These “noble” Catholic wars were among the bloodiest imaginable: In taking Jerusalem in July 1099, the Catholics killed an estimated 70,000 Jews and Arabs. Every Muslim sheltering in the al-Aqsa Mosque was slaughtered. The Jews fled to their main synagogue, and the Crusaders set the building on fire, killing every man, woman and child. Over the course of 200 years of Catholic crusading, somewhere between several hundred thousand and several million people had their blood spilled on holy land.

In the book Crusades, Terry Jones and Alan Ereira wrote, “By summoning an army under the banner of the cross, the pope was extending the church’s mantle over all Christendom. This was the idea at the very heart of the revolutionary papacy; in place of separate local churches at the center of discreet communities, there was to be one overarching church, ruled by one overarching pope. The Crusade was to be its expression and its instrument.”

At the heart of the Crusade-era papacy was the desire to control every Christian church—a sentiment the new pope shares. As Cardinal Ratzinger, he pointed out in a Vatican document that all non-Catholic religions were in “a gravely deficient situation in comparison with those who, in the [Catholic] Church, have the fullness of the means of salvation.”

Since becoming pope, Benedict xvi has spent much of his time talking about church unity. He believes that he alone speaks for all Christians—even the “gravely deficient” variety. It’s important that we understand this—especially when discussing the Crusades and Jerusalem. After all, during those Crusades, the Catholic Church converted others by the sword in its quest to become synonymous with Christianity.

When the Catholic Church today talks about the nobility of the Crusades, remember what the goal really was: to rule the world from Jerusalem.

Continuing in Crusades: “[Pope] Urban’s army would also rescue Jerusalem, the spiritual (and therefore the physical) center of the universe. He hoped that the redeemed Jerusalem would be directly ruled by the church.”

That goal has not changed. The argument that the Crusades show the Catholic desire to control Jerusalem is a historically strong one, but recent action by the Vatican shows that Catholic sights are clearly still set on Jerusalem, even after centuries of failure to maintain a foothold there.

The Vatican and Jerusalem Today

High Vatican officials have been announcing the church’s stance on Jerusalem for several months now. Cardinal Ignace Moussa Daoud, prefect of the Vatican’s Congregation for Eastern Churches, sent a letter to all of the bishops of the world March 14 saying, “The presence of Christians in the Holy Land is now, more than ever, necessary to ensure a peaceful future to that area, and for the sake of the universal church, which must have communities championing the faith in the gospel” (agi).

More than simply pursuing a “peaceful future” though, the Vatican has specific aims in the region. For seven years, the Catholic Church has been trying to acquire various sites and buildings in Israel that it claims it used to control.

Last year, Christian publications around the world—including the official Vatican newspaper El Messagero—reported that an agreement would be signed transferring sovereignty of parts of Jerusalem’s Mount Zion to the Vatican. Specifically, as IsraelNationalNews.com reported in October, the proposed contract would give the Catholic Church control over what it claims is the location of the Last Supper (a room actually built by the crusaders in the 14th century)—one of Catholicism’s most sacred sites. Currently, a Jewish religious school is located there, which Jews believe sits atop King David’s tomb.

“Final details on a long-delayed accord on the status of Roman Catholic properties in the Holy Land are expected to be agreed during the visit, marking a new era of reconciliation between Christians and Jews,” reported the Times of London (Oct. 14, 2005). Israel’s Foreign Ministry confirmed that it had received a blueprint of the proposed agreement from the Vatican.

The discussions culminated last November, when Israeli President Moshe Katsav met with Pope Benedict xvi in what was the first official visit by an Israeli head of state to the Vatican.

In the end, the agreement was not concluded during the November visit—possibly due to pressure from Jewish groups to hold on to the territory. It appears Israel is dragging its feet on this issue. The Vatican, no doubt becoming impatient after years of negotiations, may have been attempting to pressure Israel by publicizing the possibility of this agreement.

Now, with little progress made in that round, the Vatican is becoming even more direct in its statements on the Jerusalem issue. The Vatican’s chief legal adviser in the negotiations to secure holy sites within Israel, David Jaeger, was especially straightforward, saying on January 3 that the “issue of Jerusalem is too important to be left in the hands of the Israelis and Palestinians” (IsraelNationalNews.com). At a Jewish-Muslim-Christian conference at the University of Haifa, he said that Jerusalem is considered a “corpus separatum” according to the Nov. 29, 1947, UN resolution and therefore belongs to neither the Palestinian or Jewish state. According to international law, argued Jaeger, Israel has no legal authority over Jerusalem (Haaretz, January 19).

To put it simply, in the Vatican view, Israel cannot give any of Jerusalem to the Palestinian Authority because Jerusalem does not belong to Israel.

One has to ask: If the Vatican now says Jerusalem does not belong to the Jews or the Palestinians, whose city is it? If Jews shouldn’t administrate the Holy Land, who should?

The Vatican did not recognize the State of Israel at all until the pope established diplomatic relations in 1993—only to form a similar relationship with the Palestinians a year later. We shouldn’t be too surprised that the Israeli government has only tenuous support from the Vatican. After all, the Jews are living where the Vatican yearns to be: Jerusalem!

Zechariah 14:2 discusses an imminent, turbulent conflict between Israel and the Palestinians (see our March 2006 cover story), but consider another prophecy about Jerusalem in Zechariah 12:3: “And in that day will I make Jerusalem a burdensome stone for all people: all that burden themselves with it shall be cut in pieces, though all the people of the earth be gathered together against it.” Jerusalem means “city of peace,” but it is going to be a burden for everyone that comes into contact with it—including the Vatican.

Although the Arab people will take half of Jerusalem, Bible prophecy also tells us their rule will be short-lived. The Islamic people will unite in what Bible prophecy calls the “king of the south.” Daniel 11:40 tells us that king will push against a fully revived Holy Roman Empire in Europe—the king of the north. That “push” will cause the Catholics to rally against the Muslims again—just like in the Crusades. That European king of the north will respond like a whirlwind, overthrowing those countries, and entering into the “glorious land”—Jerusalem!

The major cause of contention between the Arab people and Europe will be that city! One result of this battle will be the realization of the Catholic dream: The pope will finally rule from Jerusalem—however briefly. Daniel 11:45 tells us the religious head of this European superpower will “plant the tabernacles of his palace between the seas in the glorious holy mountain ….” The two seas: the Dead Sea and the Mediterranean; the mountain between them: Mount Zion. This rule will be cut short; the rest of verse 45 tells us: “… yet he shall come to his end, and none shall help him.”

Do we see how critical Jerusalem is? That city is the focal point of all prophecy in this end time. There is nowhere more significant you could watch.

Most importantly, another religious figure has a profound interest in Jerusalem: Jesus Christ of Nazareth. Scripture tells us that ultimately He will reign from that city! The glory of that coming city of Jerusalem can be defined by seeing what it has been for the last several thousand years—and then imagining the opposite.

Up until now, Jerusalem has been a city of blood; when Jesus Christ rules, it will be a city of life.

Up until now, the Jews have been driven out of their homeland many times; soon, God’s people will “go no more out” (Revelation 3:12).

Beyond that, God Himself will prepare a new Jerusalem from which He will rule the entire universe. Read Revelation 21 for an amazing description of how beautiful the new Jerusalem will be. Jerusalem has been destroyed and rebuilt so many times that it is difficult to keep count; when God brings the new Jerusalem down from on high, it will never be destroyed again.

Until that time comes, pay close attention to Vatican activity in and around Jerusalem; it is the precursor to the last crusade.