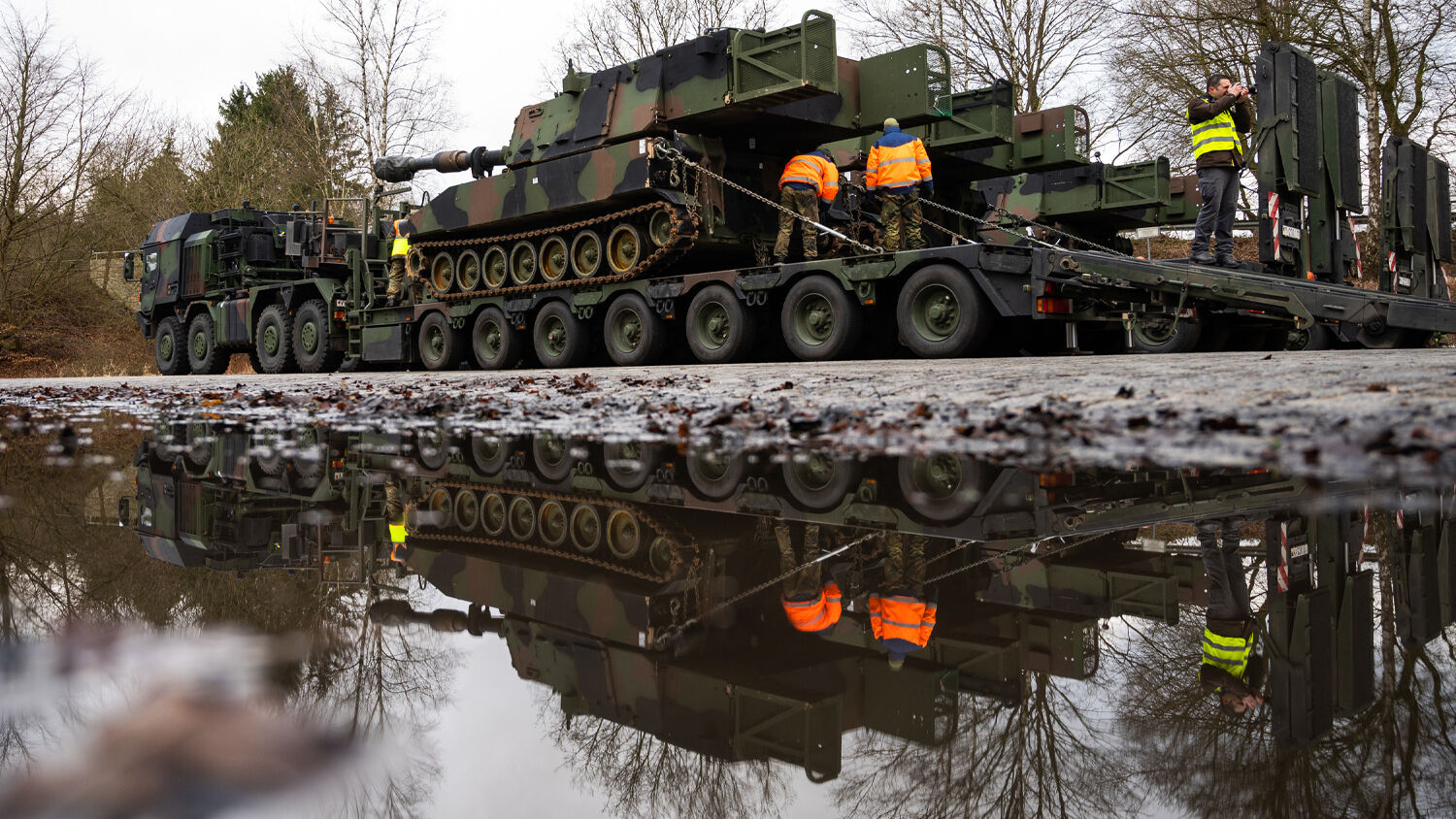 An M109A6 self-propelled howitzer of the U.S. Army is loaded onto a Bundeswehr heavy-duty transporter during the “Defender-Europe 20” exercise in February.
Philipp Schulze/picture alliance/Getty Images

Military developments in Europe will be remembered as ignored warning signs that led to World War iii.

For decades, Europe’s security has depended heavily on the United States in its arms production and troop deployment. With the U.S. now withdrawing troops from Germany, Europe is even more eagerly preparing its industry for a total break from the U.S. Europe’s arms industries are now working openly toward making future weapons and weapon technologies independent from U.S. components.

European arms manufactures are pushing to free themselves from the International Traffic in Arms Regulations (itar). Through itar, the U.S. reserves the prerogative to decide what happens to weapons that use U.S. technology or components. The U.S. can, therefore, restrict the export of those weapons. It also allows the U.S. to view the complete construction plan of objects in which components subject to itar are used. Die Welt am Sonntag called these regulations “one of the most comprehensive export regulations in the U.S.A.” (“ITAR Free—This Is How Europe’s Military Wants to Free Itself From U.S. Dictates”).

The overall goal for many of Germany’s future products is to be 100 percent European. Florent Chauvancy, head of sales for the saffron helicopter division, told Welt am Sonntag, “One of the advantages of 100 percent European products is that the data from operations remains in Europe and does not end up in the hands of non-European countries. With ‘itar free’ and without the requirements of other American regulatory systems, Europe will have more freedom to whom arms products are delivered.”

They are looking for a “100 percent European solution,” one that keeps everything in Europe and secures Europe’s “sovereignty.”

This march toward European sovereignty is further underlined by U.S. President Donald Trump’s announcement that American troops will be withdrawing from Germany. Many in Germany are quite happy to break ties with the U.S. According to a survey by the YouGov opinion research institute on behalf of the dpa news agency, “47 percent are in favor of reducing the current 36,000 soldiers,” and 25 percent think U.S. armed forces should leave Germany entirely. Only 32 percent view the U.S. presence favorably. Twenty-eight percent believe that U.S. troops should stay at their current strength, while 4 percent believe the U.S. should increase its troops in Germany.

One thing is clear: The majority believe Germany should take its security into its own hands.

French President Emmanuel Macron referred to it as “strategic autonomy” of France and the European Union. In November 2018, Macron called for a true European army to protect Europe from “China, Russia and even the United States.” Recently, he called the North Atlantic Treaty Organization “brain-dead.”

Macron’s statements are worth contemplating. European leaders are thinking about a world where they’re in military opposition to the United States, and they’re preparing its defense industries for that reality.

Gaining independence in its arms production is only one of several signs that Europe is preparing for a break with the U.S.

Today, Europe still depends heavily on U.S. military technology. But the time will come when the growing hostilities will no longer be disguised by words like “itar free.” In a few short years, the world will be caught totally off guard by Europe’s rise to military dominance—so says your Bible.

An independent European military force is rising. Germany will lead this powerhouse. Macron may be the most vocal leader in Europe right now, but as history proves, Germany is always at the head of Europe. The Bible prophesies that Europe will soon get a leader who will lead this growing military power to war.

A prophecy in Daniel describes these events soon ahead of us: “And in the latter time of their kingdom, when the transgressors are come to the full, a king of fierce countenance, and understanding dark sentences, shall stand up. And his power shall be mighty, but not by his own power: and he shall destroy wonderfully, and shall prosper, and practise, and shall destroy the mighty and the holy people” (Daniel 8:23-24). These events are for the latter days (Daniel 12:1). In Isaiah 10:5, God warns that a rising military empire will be used to punish the modern descendants of Israel, primarily the U.S. and Britain. God calls Assyria, modern-day Germany, the rod of His anger. Germany’s military rise at the helm of a united Europe has been prophesied!

The theologians of this world do not understand these prophecies. But they have been revealed to God’s prophet. Trumpet editor in chief Gerald Flurry explains this in detail in Daniel—Unsealed at Last! (free upon request).

It is up to you to study where these events are leading. God works in the affairs of men in ways mankind doesn’t understand. He will eventually put an end to all sin and warmongering, but you need to understand what will precede God’s intervention. Request a free copy of Nuclear Armageddon Is ‘At the Door,’ by Gerald Flurry, to learn more about God’s prophecies and His plan to intervene in the affairs of men.