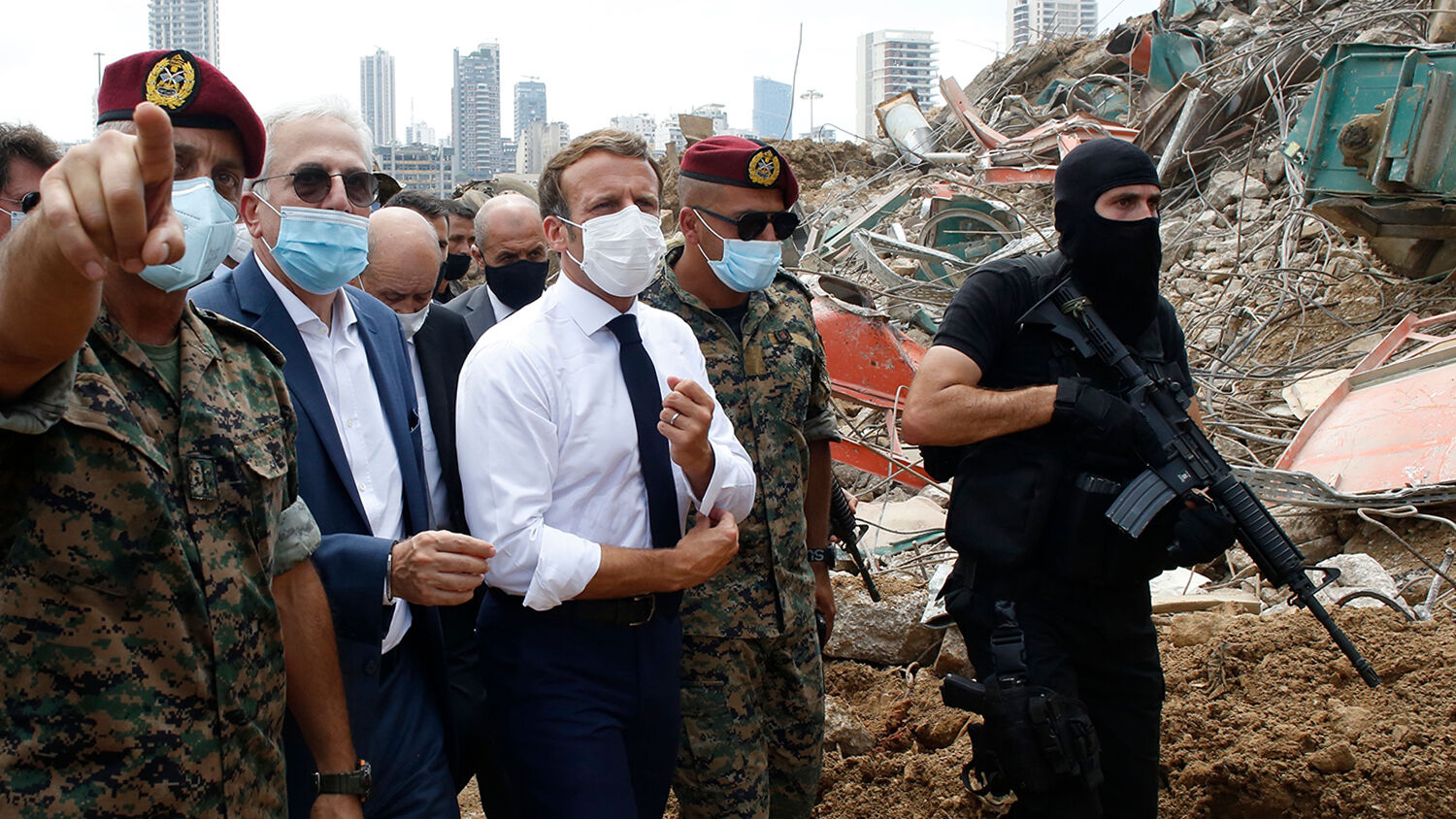 French President Emmanuel Macron, surrounded by Lebanese servicemen, visits the devastated site of the explosion at the port of Beirut, on August 6, 2020 two days after a massive explosion devastated the Lebanese capital in a disaster that has sparked grief and fury.
THIBAULT CAMUS/POOL/AFP via Getty Images

In the wake of the Beirut blast, did the French president just become the most important man in Lebanon?

On Thursday, French President Emmanuel Macron walked through Beirut’s destroyed downtown getting a firsthand account of the destruction and the human toll of the blast. Throngs of people surrounded Macron and shared not just their anguish, but their fury over the failure of their own political leadership.

To the people of Lebanon, a country disillusioned by its own government’s corruption and incompetence, the prompt arrival of Macron was almost messianic.

Before Tuesday’s blast, which killed over 150 people and wounded 5,000 more, Lebanon was already facing unprecedented economic collapse. The Lebanese lira has lost 85 percent of its value in the past year. More than half the population is in poverty. Food scarcity and rolling blackouts are common across the nation.

A financial rescue package has been put forward by the International Monetary Fund, but it won’t release the loan until reforms are made by the government. And the government, dominated by Hezbollah, has refused to make those reforms.

But the blast has forced the issue.

With $15 billion in damage, most of its emergency grain storage contaminated, and an extra 300,000 people homeless, Lebanon needs the money and now.

However, many Lebanese citizens are worried that the relief money will be directed by the same corrupt politicians who led the nation down the path to financial ruin in the first place.

Macron has clearly heard the people and addressed the issue while walking through the streets of Beirut. “I can guarantee that this assistance will not be placed in the hands of the corrupt, and a free Lebanon will rise again,” Macron told one woman.

Rather than siding with Lebanon’s leaders, Macron went directly to the people. And if he has his way, the international aid effort will be funneled the same way.

“We will organize international aid so that it directly reaches the Lebanese people under United Nations supervision,” Macron told the nation. “I am here to launch a new political initiative. I will propose a new political decade during my meetings, and I will return on September 1 to follow up on it.”

Naturally, Macron feels a certain responsibility to Lebanon. The Middle Eastern nation of 7 million people was set up originally as a French protectorate after the First World War. After Arabic, French is the most common language.

Responding to Macron’s moves, about 60,000 people had signed an online petition by midday Friday, which demanded that Lebanon be placed under a French mandate for the next 10 years.

“We’re asking for the president of France to take over Lebanon,” Jana Harb told the New York Times, as she was out cleaning up rubble from the blast. “Just throw away the government. There’s no future here for us if the current politicians stay. We’d rather get colonized than die here.” The somewhat bizarre call for recolonization speaks to the depths of Lebanon’s frustration with its leaders.

The hero’s welcome for Macron on the streets of Beirut stands in stunning contrast to the reception of Lebanon’s own leaders. The main party heads have not dared walk the same streets for fear of attack. When they do travel, their motorcades are attacked. When one of the lesser government figures ventured out, she was hounded and sprayed down with water by the furious mob.

Fliers being handed out in downtown #Beirut:

“Today is the last day of raising the ruble and cleaning Beirut.

Tomorrow we will cleanse Beirut of them and the corrupt

On Friday afternoon, Lebanese President Michael Aoun addressed the nation, and as expected, he tried to blame “foreign interference” for the blast. But the Lebanese people aren’t buying it. Even if the fire that started the blast was sabotage, it was the Lebanese government that left the ticking bomb in the harbor for the past six years despite being alerted of the potential dangers numerous times by customs officials. To many, the fact that Aoun announced he would refuse an international investigation into the explosion only verified the government’s complete failure.

Partway through Friday’s address, the Lebanese Broadcast Company channel, the most popular channel in Lebanon, cut away from President Aoun’s speech, stating that it will no longer broadcast the speeches of politicians. “Let your achievements speak for themselves,” the broadcaster noted.

On Friday, Hezbollah Secretary General Hassan Nasrallah broke his silence on the attack. While the leader refused to blame anyone for the attack, he rebuked those who direct their anger at Hezbollah. “From the first hour of the explosion—when people hadn’t even figured out what happened or who caused it, etc—some local, Arab media and political factions had their story predetermined that what exploded in a warehouse I don’t know what was a Hezbollah arms cache, explosive materials, missiles. Didn’t matter, it just had to be Hezbollah,” he said, according to a rushed transcript by journalist David Daoud.

Nasrallah continued, “I want to be very clear and totally deny that we have nothing in this warehouse—no missile, ammonium nitrate, no bullet—not now, not in the past. The investigation will show this. If what was destroyed was military in nature, the investigation will show.” However, the public sentiment is such in Lebanon that the people no longer trust anything that their politicians tell them.

That is why Macron’s visit was a watershed event for Lebanon’s future.

The people have more trust in the leadership of President Macron than of their own politicians, whether Shiite, Sunni, Druze or Christian.

On Thursday, a European leader, not Hassan Nasrallah, was the most important man in Lebanon.

This is an incredible change for Lebanon and one that Trumpet editor in chief Gerald Flurry has forecast for the past decade. According to a prophecy found in Psalm 83, Mr. Flurry has stated that Lebanon will fall out of the Iranian orbit and side with European forces.

This week, with Macron’s visit to Lebanon, this prophecy is on the way to being fulfilled. Of course, it will be up to Macron and his European partners to follow up on the visit with more concrete steps. It will not be easy for Europe to replace Iran and Hezbollah as the dominant outside force in Lebanon. Nevertheless, given the public outrage at Hezbollah in contrast to the jubilant support for Macron, revolution is coming to Lebanon. Biblical prophecy says it certainly will happen eventually.

We have been waiting for conditions inside Lebanon to get to the point where this is possible. As we wrote earlier this week, before Macron’s visit, “the events of the current week may provide this catalyst.”

Lebanon may be a world away, but events in this tiny Middle East nation will eventually impact the lives of every individual on Earth. As Mr. Flurry wrote in his landmark article “Why You Need to Watch Lebanon,” a European entrance into Lebanon will infuriate Iran. And it will set off a firestorm of retribution directed not at Israel and the United States, but at Europe. This too is prophesied in your Bible and will be the event that pushes the whole world toward war.

To understand how events in Lebanon and the Middle East will affect your life, and what you can do now to prepare, please read The King of the South.