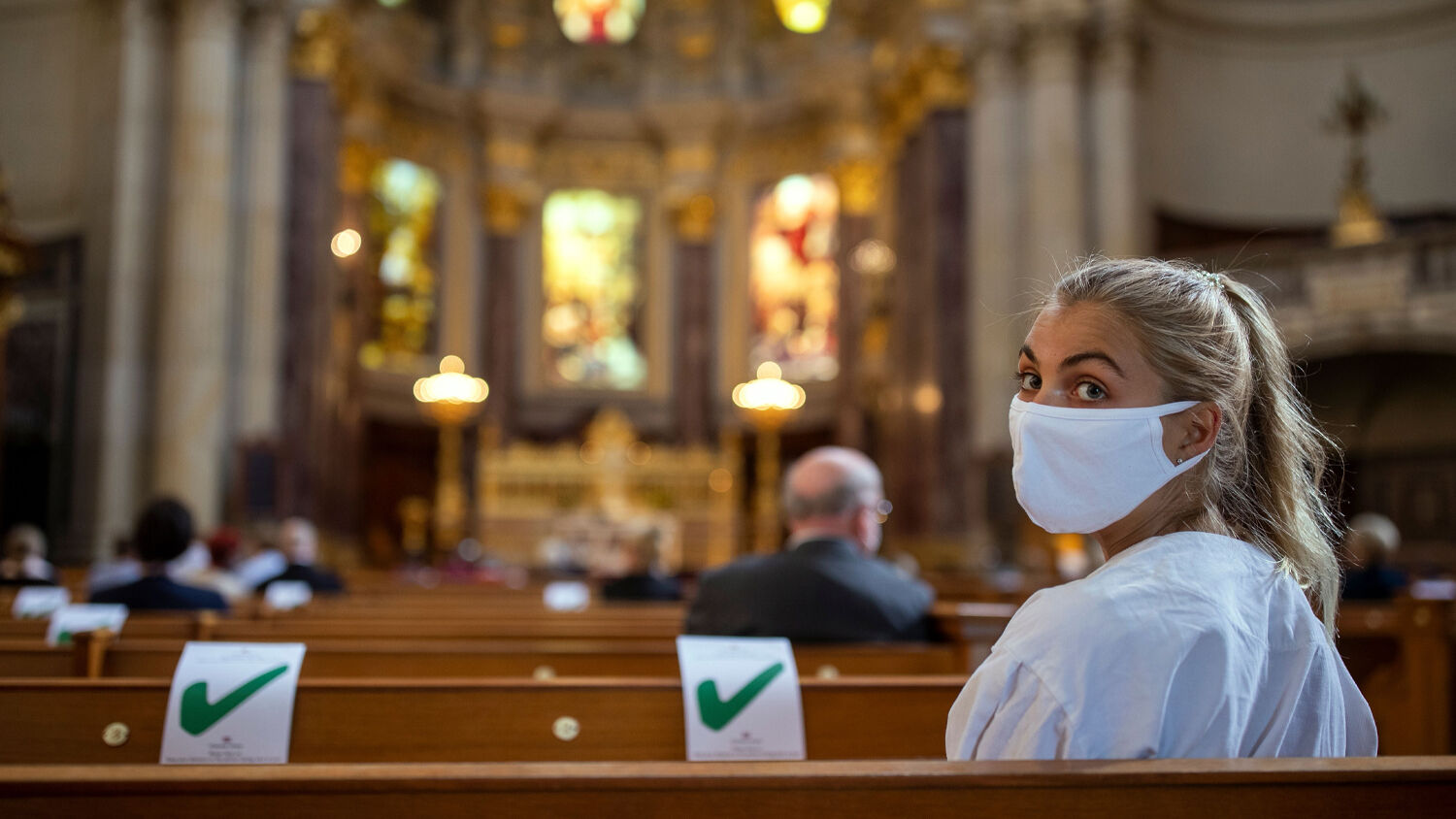 A woman attends a Sunday service at the Berliner Dom cathedral in Berlin on May 10 amid the covid-19 pandemic.
ODD ANDERSEN/AFP/Getty Images

Dictating health regulations robs people of not only their free choice but also a free future.

On August 1, thousands of Germans demonstrated against the government’s coronavirus measures. The organizers of “Tag der Freiheit” (“Freedom Day”) claim that the government is misrepresenting the threat of the virus. Around 20,000 protesters assembled, ignoring government-enforced health guidelines.

Because many demonstrators didn’t keep social distancing rules or wear masks, the police broke up the gathering. Of the 1,100 police officers on duty, 18 were injured during the demonstration.

The demonstration has sparked a debate about which is of greater value: people’s freedom to assemble or public health. The response to coronavirus has led to many freedoms and rights around the world being suspended. Many Germans hold these freedoms dear because they lost them less than a century ago to one of history’s most ruthless dictators: Adolf Hitler. At the same time, others are willing to give up those freedoms.

“German politicians have lined up to condemn Saturday’s protests against covid-19 measures,” Deutsche Welle noted on August 3. “There is a heated debate as the freedom of assembly is enshrined in the constitution—but so is protecting public safety.” The government has to ensure the public’s safety, but what happens if the German people disagree with the government’s conclusions or even believe that they are being lied to?

In a survey published on August 8 by the Forsa Institute on behalf of the media group rtl, 91 percent of those surveyed said they had no sympathy for the protesters. “Never in the history of the federal republic has a minority opposed the majority of society as vehemently as in the coronavirus protests in Berlin,” Thomas Schmid noted for Die Welt (Trumpet translation throughout). These people, focused on their own wealth and prosperity, are selfishly taking to the streets, he said.

The media and politicians also criticized the protests. “The irresponsibility of a few is a risk for all of us,” President Frank-Walter Steinmeier said in a video message on Monday. “If we are not particularly careful now, we are endangering the health of many. And we are also endangering the recovery of our society, our economy, our cultural life. Each and every one of us now has a responsibility to prevent a second lockdown.”

Justice Minister Christine Lambrecht told Süddeutsche Zeitung newspaper that she “lacked all sympathy” for the protesters while agreeing that the right to assembly is “an especially valuable legal right.” Berlin Mayor Michael Müller said he believes that “the worst [part of it] is they simply don’t recognize the facts and [are risking] the health of other people.”

“In Germany, it’s up to local authorities to make the conditions under which demonstrations are permitted,” Deutsche Welle noted. “Though their hands are tied to a great extent by the German constitution, which enshrines the right to demonstrate except when demos turn violent, if participants are carrying weapons, or if their faces are covered (which of course raises its own legal headache in the coronavirus age).”

The police have been asked to enforce, among other things, social distancing guidelines to guarantee public security. But when the matter is raised to the courts if the protests were illegally suppressed, the judges will evaluate the matter in regards to constitutional violations. As Paulina Starski, a senior research fellow at the Max Planck Institute for Comparative Public Law and International Law in Heidelberg, told Deutsche Welle, the courts would rather side with the people’s rights if in doubt, partly due to “Germany’s dark authoritarian past.”

As Starski added, there is certainly a danger that authorities could use coronavirus prevention measures to curtail constitutional freedoms. “Absolutely,” she said. “The new rules during the hard lockdown led to a situation where the freedom of assembly was, to a large extent, de facto suspended—but subsequent court decisions allowing demonstrations have redressed that balance since then.”

“It’s a basic problem of the coronavirus situation that many constitutional lawyers are discussing because there was a massive political need to act to protect the health of the population,” she added. “Now we’re in a kind of review phase—are there any constitutional guidelines that need to be followed? Because from a constitutional point of view, the tendency is always towards protecting freedom.”

Some of the demonstrators believe in various conspiracy theories. Neo-Nazi organizations have also called for participation in protests, according to Berlin’s senator for the Interior, Andreas Geisel. “Right-wing symbols, such as the Reich flag, had also been displayed openly at several points in the demonstration,” Zeit Online noted.

Even the demo’s name, “Freedom Day,” can be traced back to Germany’s National-Socialist past. A propaganda film by Nazi icon Leni Riefenstahl about the party congress of the nsdap in 1935 was titled “Freedom Day.” The demonstration was also noted to have had anti-Semitic undertones.

In this case, the far-right is using the freedom to assemble to promote symbols of a dictatorship that abolished the same. The demonstrations thus drew on a pool of a peculiar mixture of people. Die Welt noted:

The 2020s have spawned new political movements on the right and on the left that relentlessly pursue their interests—and in some cases arouse doubts about their democratic attitudes. Political parties are not immune to such tendencies either. What’s going on?

Over the weekend, around 20,000 people demonstrated against the coronavirus regulations in Berlin. The mix was bizarre. Rainbow and German Reich war flags were waved. Signs said things like “No to the dictatorship of the New Normal” or “I will not allow my voice to be forbidden,” “Muzzle” or “Worse than the gdr [German Democratic Republic]”. In the sed [Socialist Unity Party of Germany] dictatorship, demonstrations were banned and protesters arrested and detained for a long time. All this is allowed to be said in Germany.

The study “Trust in Democracy,” which was carried out between 2018 and 2020 on behalf of the spd-affiliated Friedrich-Ebert-Foundation, nevertheless came to the following result: “Less than half of the people in Germany are satisfied with how democracy in our country works. Two thirds believe that future generations will be worse off. “

While certainly not all demonstrators shared the far-right’s views, all distrust the government.

Far-right mentalities in Germany are on the rise. But the government is gaining more strength and support to enforce “law and order.” Germans are divided. They can see how their nation is changing. Some fear this development; others see it as an opportunity.

Expect circumstances to worsen as the economic conditions in Germany and Europe become more severe. We are likely to see people revolt more and more as fears grow that the crisis has been manufactured to force them into submission. In turn, expect the government to increase its grip on society.

All this leads to the fulfillment of one of the Bible’s most remarkable end-time prophecies.

The Bible reveals that Germans will soon lose many of their freedoms as a strong German state emerges amid political and social chaos. A dictator will use the divide and chaos in Germany and Europe to rise to power. “And in the latter time of their kingdom, when the transgressors are come to the full, a king of fierce countenance and understanding dark sentences, shall stand up” (Daniel 8:23). Daniel 11:21 reveals how he will come to power: “And in his estate shall stand up a vile person whom they shall not give the honour of the kingdom: but he shall come in peaceably, and obtain the kingdom by flatteries.” Trumpet editor in chief Gerald Flurry wrote about these prophecies in “Germany—A New King Is Imminent”:

Notice how this man is characterized. He has a “fierce countenance,” meaning he’s mighty, powerful and cruel. He has an “understanding [of] dark sentences.” Clarke’s Commentary says, he’s “very learned and skillful in all things relating to government and its intrigues”—a cunning politician. He inherits the throne of Europe “peaceably,” obtaining his kingdom by “flatteries.” He is crafty and sly, with a brilliant mind and an engaging, attractive personality. The Jamieson, Fausset and Brown Commentary says “the nation shall not, by a public act, confer the kingdom on him, but he shall obtain it by artifice, ‘flattering.’” In other words, a deceived public, or a group of European leaders, likely invites this man into power.

Current conditions in Europe, including the refugee crisis and the turmoil in German politics, provide probably one of the greatest opportunities ever for a new leader to come into power “by flatteries.”

As Germans become increasingly distrustful of the current government, we can expect them to be looking to a new leader, “a cunning politician.”

The conditions we see in Germany right now are laying the groundwork for this momentous prophecy to be fulfilled. Read “Germany—A New King Is Imminent” and request a free copy of A Strong German Leader Is Imminent to learn how this man will come to power and what it will mean for the world. Events in this world are about to take a dramatic turn, but you can be prepared for the coming calamities by understanding these prophecies.