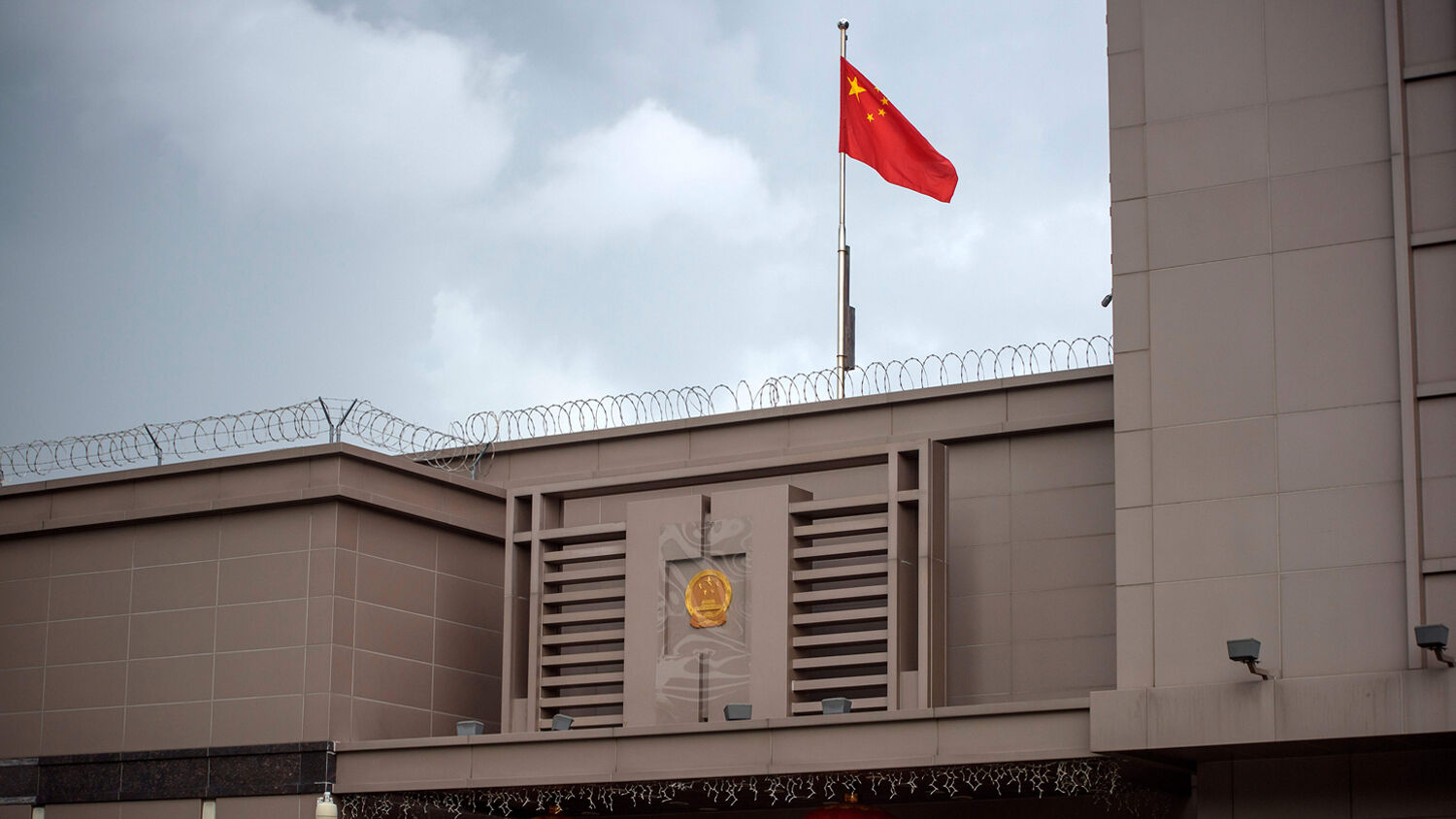 The Chinese flag flies over the Chinese Consulate in Houston, Texas, on July 22.
MARK FELIX/AFP /AFP via Getty Images

America was naive to ally with a Communist dictatorship.

Relations between the United States and China have hit their worst point in decades. On July 22, the U.S. government ordered China to shut down its Houston Consulate, calling it “a hub of spying.” China responded by ordering the U.S. to close its consulate in the western Chinese city of Chengdu. These tit-for-tat measures come just days after the Federal Bureau of Investigation charged two Chinese hackers with stealing millions of dollars in U.S. trade secrets—including covid-19 pandemic data and defense secrets.

A few months before these charges, the fbi arrested a Harvard University professor for lying about his involvement in the Thousand Talents Program, a Chinese initiative to recruit experts in scientific research and innovation.

Last February, fbi Director Christopher Wray warned that Chinese theft of technology might be the most serious law enforcement threat the U.S. faces. And Secretary of State Mike Pompeo is warning that America’s diplomatic outreach to Communist China has proved an absolute failure.

“Next year marks half a century since Dr. Kissinger’s secret mission to China, and the 50th anniversary of President Nixon’s trip isn’t too far away in 2022,” said Secretary Pompeo at the Richard Nixon Presidential Library. “The world was much different then. We imagined engagement with China would produce a future with a bright promise of comity and cooperation. Today, we’re all still wearing masks and watching the pandemic’s body count rise because the [Chinese Communist Party] failed in its promises to the world. We’re reading every morning new headlines of repression in Hong Kong and in Xinjiang.”

Pompeo went on to recount how China “ripped off our prized intellectual property and trade secrets, costing millions of jobs all across America.” He recounted how China “sucked supply chains away from America, and then added a widget made of slave labor.” He recounted how China “made the world’s key waterways less safe for international commerce.” And then he warned, “Securing our freedoms from the Chinese Communist Party is the mission of our time, and America is perfectly positioned to lead it because our founding principles give us that opportunity.”

Yet standing up to China will not be simple.

In the almost 50 years since the U.S. officially recognized Communist China, the nation has grown from a feudal backwater into one of the most powerful countries in the world. Almost 20 percent of U.S. imports come from China, and many nations—including trusted American allies—are unwilling to risk upsetting Beijing.

Analysts are now warning that China is the greatest threat to world freedom, so they should not be surprised that the Chinese have rejected liberal democracy. Shortly before Communist revolutionary Mao Zedong seized control of China in 1949, the renowned educator Herbert W. Armstrong warned: “The real goal of the Communist plotters is the violent overthrow of the United States and the British Empire.” So, America was naive to trust a Communist dictatorship in the first place.

The United States refused to formally recognize the People’s Republic of China for 30 years after Mao’s Communist revolution. Instead, it recognized the Kuomintang government in Taiwan as the real China, while condemning the Communist government in Beijing as an occupying force. But after Mao died in 1976, his successors promised to implement a series of far-reaching market-economy reforms. So on Jan. 1, 1979, the U.S. switched its diplomatic recognition of China from Taipei to Beijing.

Former U.S. President Richard Nixon recommended this strategy years earlier. “Taking the long view, we simply cannot afford to leave China forever outside of the family of nations,” he wrote in a 1967 Foreign Affairs article. “The world cannot be safe until China changes. Thus, our aim—to the extent we can, we must influence events. Our goal should be to induce change.” But before he died in 1994, Nixon admitted that his strategy might have backfired. In an interview with his former speechwriter, William Safire, he acknowledged playing the China card to exploit a split in the Communist world, but was not as hopeful about the outcome as he had once been. “We may have created a Frankenstein,” Nixon said.

In his 1984 book New Lies for Old, kgb defector Anatoliy Golitsyn warned the West not to trust Communist China. He warned that China’s liberalization reforms were a clever ruse to undermine the U.S. and ultimately establish a world federation of Communist states.

Golitsyn noted that after “the Second World War, the threat of monolithic, Stalinist communism drove the West into military and political alliances, such as [the North Atlantic Treaty Organization], [the Southeast Asia Treaty Organization], and the Baghdad Pact.” Therefore, the Communist bloc decided to “proceed toward its aim of worldwide victory for communism by forging its own unity and coordinating its own policies as far as possible in secret while at the same time undermining the unity and resistance of the non-Communist world by projecting a misleading image of its own evolution, disunity in weakness.” In practice, this meant faking a Sino-Soviet split and adopting enough free-market reforms to bait the U.S. and Europe into trading with Russia and China. But the goal was to use a “scissors strategy” to cut nato in half.

In his 1995 book The Perestroika Deception, Golitsyn further elaborated on how China’s close relationship with the U.S. was part of a strategy to become “a modern superpower with the help of American technology.” Once Communist China accomplishes this goal, Golitsyn’s analysis predicts that Beijing will help Moscow destroy nato and “restructure” the U.S. government.

Whether or not Golitsyn was right about China’s deliberate strategy, it is undeniable that many of his predictions have come to pass. When Mao Zedong first took over China, the major English-speaking nations (Australia, Britain, Canada, Ireland, New Zealand and the United States) generated 37 percent of the world’s gross domestic product. The nations of Western Europe generated 19 percent of the world gdp. Meanwhile, the Sino-Soviet axis only generated about 15 percent. The Communists were at a decided disadvantage.

But after decades of perestroika deception, the English-speaking nations generate about 25 percent of the world gdp, and Western Europe about 14 percent. Much of the West’s economic power has shifted to Asia, where China’s share of the world gdp has more than tripled over the past five decades. China’s plan to “become a modern superpower with the help of American technology” has worked. If it can successfully destroy the nato alliance and pull the “pseudo-social democratic regimes” of Europe into an alliance with Moscow and Beijing, it will have enough power economically to isolate the U.S. and its remaining allies.

Throughout the Cold War, Herbert W. Armstrong warned that communism would be the devil’s tool to take from America the greatest national blessings ever conferred on a people.

“We are not fighting a single nation in a military war, but a gigantic worldwide, plain-clothes army, masquerading as a political party, seeking to conquer the world with an entirely new kind of warfare,” he wrote in 1956. “It’s a kind of warfare we don’t understand, or know how to cope with. It uses every diabolical means to weaken us from within, sapping our strength, perverting our morals, sabotaging our educational system, wrecking our social structure, destroying our spiritual and religious life, weakening our industrial and economic power, demoralizing our armed forces, and finally, after such infiltration, overthrowing our government by force and violence! All this, cleverly disguised as a harmless political party! Communism is worldwide psychological warfare!”

Much of his warning focused on Soviet “demoralization” efforts to pervert our morals, wreck our social structure, and destroy our spiritual values by promoting the “God is dead” movement in American universities. But it has primarily been the Chinese Communist Party that has weakened our industrial and economic power. Today, Secretary of State Mike Pompeo is warning that China has “sucked supply chains away from America,” but Mr. Armstrong warned about communism “sapping our strength” even before the U.S. established diplomatic relations with Communist China.

Long-time readers of the Trumpet know that the United States and United Kingdom are descendants of the biblical patriarch Jacob (renamed Israel). You can prove this by reading Mr. Armstrong’s book The United States and Britain in Prophecy. This means that end-time Bible prophecies about Israel primarily apply to the U.S. and Britain today.

The Prophet Isaiah corrected the house of Jacob for forsaking God’s law and running after Eastern philosophies. “O house of Jacob, come ye, and let us walk in the light of the Lord. Therefore thou hast forsaken thy people the house of Jacob, because they be replenished from the east, and are soothsayers like the Philistines, and they please themselves in the children of strangers” (Isaiah 2:5-6). Modern-day America has committed the same mistake.

Instead of trusting God to bless and defend them, our people have established trade relations with Communist dictatorships and invited Communist professors from Russia, China and other nations to teach at our universities. And the result has been the moral corruption of our youth and the theft of our industrial technology. The Prophet Isaiah says that this idolatry will result in a time when the “lofty looks of man shall be humbled, and the haughtiness of men shall be bowed down, and the Lord alone shall be exalted in that day” (verse 11).

To secure their peace and prosperity, Americans will have to do more than close consulates and issue travel bans. They will have to turn to God and repent of the sins that are leading to their destruction.

For information about what the Bible reveals about communism and the threat China poses to the world, please read He Was Right. This power-packed booklet recounts over five decades of accurate prophetic forecasting by Herbert W. Armstrong. It is a must-read for anyone who wants to understand world events!