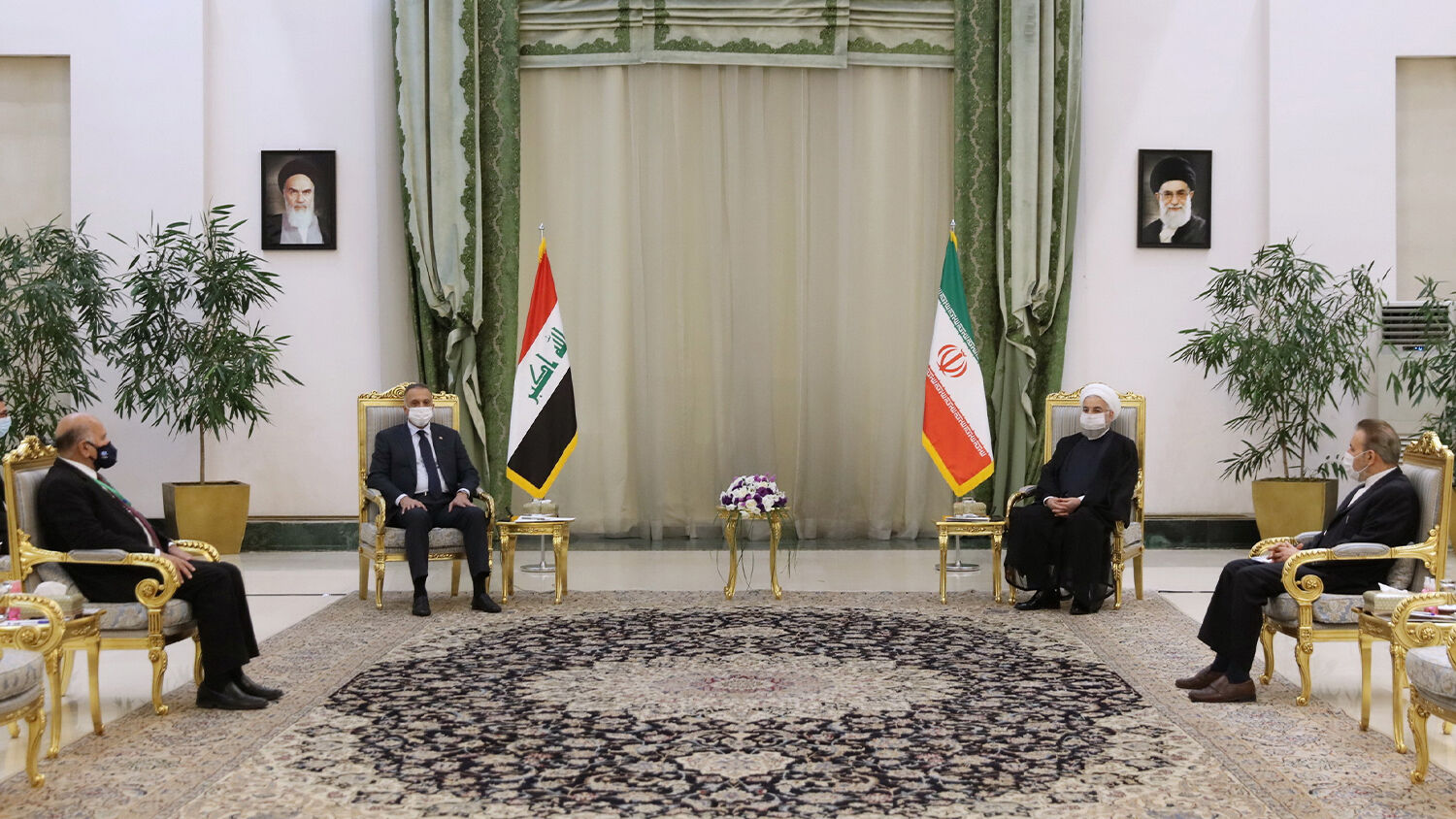 Is it coincidence that for a second time the Iraqi prime minister has met with high-level Iranian leaders before visiting the U.S.?

Khamenei stressed that it is the “corrupt” U.S. that interferes in Iraq and not Iran. He accused the U.S. of spreading destruction and sowing division in Iraq, as well as attempting to block Iran-Iraq cooperation. In making these allegations, Khamenei also noted America’s January attack in Iraq that killed the leader of Kataib Hezbollah and the Iran’s Islamic Revolutionary Guard Corps Quds Force general Qassem Suleimani. The U.S. “killed your guest at your house and explicitly confessed to the crime,” Khamenei said, referring to Suleimani. Analysts suggest that his comment could be a threat because Iraq failed to protect Suleimani in their country.

Kadhimi also met with other prominent Iranians during his time in Tehran, including the head of the Supreme National Security Council Ali Shamkhani, who earlier this year, before Kadhimi took office, pressured Iraq to expel U.S. forces. Shamkhani told Kadhimi that U.S. forces in Iraq pose a “malicious terrorist” threat. Kadhimi acknowledged Iran’s support and said that the two countries would remain brothers.

Kadhimi also met with Iranian President Hassan Rouhani on Tuesday. This meeting again emphasized the need to boost cooperation between the two countries. The pair vowed to increase annual trade to $20 billion, up from $12 billion. Rouhani emphasized that Iran would support Iraq in the fight against coronavirus and terrorism and would increase regional security. Kadhimi affirmed that Iraq will not allow aggression or threats to Iran from within its borders, adding, “We consider Iran a stable, powerful and prosperous country, and this is a reality which is in the interest of Iraq and the entire region.”

Kadhimi came to power in May this year after protests led to his predecessor’s resignation. As former intelligence chief and activist, he represents a centrist government attempting a difficult balancing act. Iraq has loyalties to both Iran and the U.S., while stuck in the midst of rising U.S.-Iran tensions. When speaking with Rouhani, he emphasized that Iraq’s foreign policy is based on “balance and avoiding alignment.” But will Kadhimi really be able to avoid taking sides amid the rising tensions?

Immediately following his visit to Tehran, Kadhimi will travel to Washington, D.C., where he will continue the strategic dialogue that started in June. At that first meeting, the U.S. agreed to reduce its troop presence in Iraq. The withdrawal has already begun—a major victory for Iran.

While Kadhimi is attempting to show that he is not aligned with either side, there is evidence to suggest that Iran has significant influence over Iraq’s leader, including in U.S. troop withdrawal.

Is this merely coincidence?

Perhaps so, but it takes on much greater significance with an understanding of Bible prophecy.

In a June 2003 article, Trumpet editor in chief Gerald Flurry asked “Is Iraq About to Fall to Iran?” He wrote: “So what will happen to Iraq when America and Britain can no longer support it? There is going to be a radical change in world events.”

In “America Is Back … ing Out,” the Trumpet’s Jerusalem correspondent wrote: “Every important biblical prophecy that takes place in the Middle East occurs in a power vacuum created by America’s exit. In fact, Bible prophecy indicates that the U.S. will have vacated so entirely from the Middle East that it will not impact it at all.”

Iraq is no longer supported by America and Britain, and America is quite literally retreating from the country. As a result, we can see Iran coming in to fill the power vacuum left behind.

Mr. Flurry’s article explains one of the reasons Iraq is so crucial to Iran and how this alliance could lead to the push described in Daniel 11:40. He wrote:

Can you imagine the power Iran would have if it gained control of Iraq, which was at one time the third-leading exporter of oil in the world? Experts say Iraq has more oil than any country in the world except Saudi Arabia. …

The clash of these two kings would be hastened greatly if Iraqi oil were to fall into the hands of Iran. But even a close alliance between the two countries could achieve the same goal. Germany and Europe get over a third of their oil from the Middle East.

Daniel 11:40 through Daniel 12:13 happen during the “time of the end.” Oil and money give the king of the south power to “push” and trigger a world catastrophe!

An alliance between Iraq and Iran could hasten the prophesied clash of the king of the north and the king of the south. Kadhimi may play the centrist role, but under his rule, America is retreating from the country and Iran is making moves to step in. It may not happen right now, but the Bible says it will happen. Watch out for it and please read our free booklet The King of the South so you can understand the events surrounding this great Daniel 11 clash.