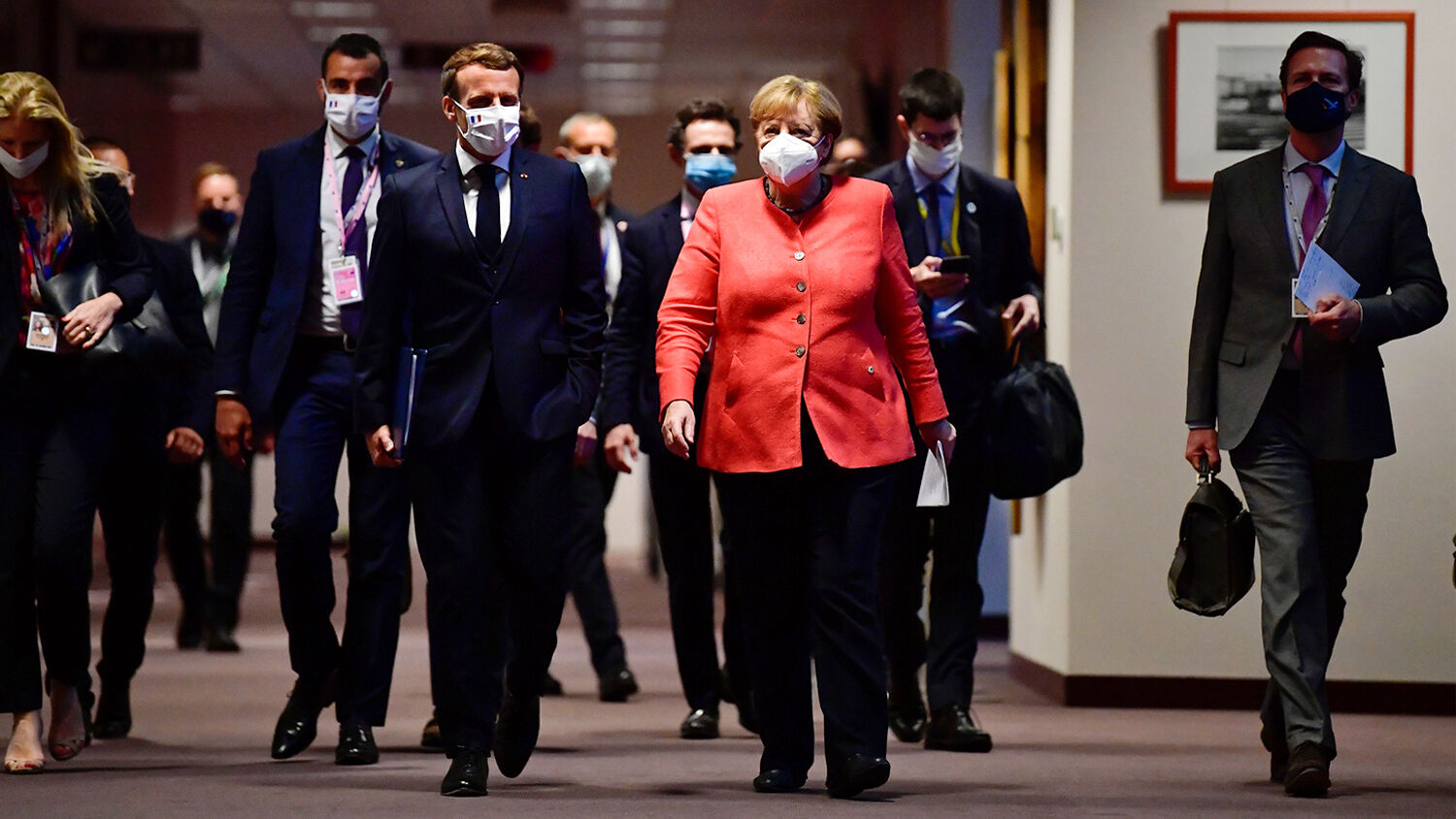 German Chancellor Angela Merkel and French President Emmanuel Macron arrive for a joint press conference at the end of the European summit at the EU headquarters in Brussels on July 21, 2020.
JOHN THYS/POOL/AFP via Getty Images

Its economic significance is questionable—but don’t underestimate its political power.

After a grueling 90 hours of negotiations spanning five days, European Union leaders agreed to a coronavirus bailout package on July 21. The meetings were heated. World leaders called each other names. It concluded with a bailout package that many economists have already written off as ineffectual. €750 billion (us$862 billion) may sound like a lot of money, but spread it out over seven years and 19 countries, and it soon becomes pretty small.

Yet this was easily one of the most important EU meetings held in several years. European leaders have, for the first time, allowed the EU as a whole to borrow money. An opaque, unelected body, the European Commission will have its hands on the purse strings. The move has observers warning that the EU is acting in ways “bordering on totalitarian.”

Earlier in the pandemic, Trumpet editor in chief Gerald Flurry wrote that “[o]ne of the most important effects of the global panic over covid-19” would be Europe’s response to it. We can already see why.

The EU will borrow money on the financial markets. Then it will give out €390 billion in grants and €360 billion in loans (the loans will eventually need to be repaid). The contentious issue was how much richer, frugal nations—such as the Netherlands, Austria, Sweden, Denmark and Finland—would have to pay to help struggling economies in Southern Europe. Germany, though formerly frugal and averse to high debt, has recently shifted its stance to encourage a shared debt in hopes of unifying the EU.

Originally, the plan was for €500 billion in grants and €250 in loans. This met the usual opposition from the Netherlands, Austria, Sweden, Denmark and Finland, making for what French President Emmanuel Macron described as “extremely tense moments” throughout the drawn-out negotiations. The summit almost clinched the record for the longest in EU history, coming second only to one in 2003—which lasted a mere 30 minutes longer.

Once during the meetings, German Chancellor Angela Merkel and French President Macron got up and walked out together. It was a show of unity for Europe’s two most influential nations; both supported a larger bailout package.

As it turns out, the recovery fund follows Europe’s typical pattern: It involves big numbers, but in reality is largely composed of money that would have been spent anyway; and it is to be paid out slowly, over many years. Analysts predict it will have little effect on the economy.

But that doesn’t dismiss its significance as a political statement.

Before coronavirus, Germany was strictly opposed to “debt mutualization,” or sharing debt among eurozone nations to create more borrowing opportunities during crises. But Chancellor Merkel made a 180-degree turn on the subject in May, and pushed for it during negotiations. Germans tend to oppose this because it reminds them of the 2008 Greek financial crisis, in which taxes paid by German citizens went to the aid of Greece, a nation viewed by many in northern Europe as wasteful and unproductive. By making the shift, Merkel signaled that European unity should come before all else.

The euro, therefore, is a political currency.

The Telegraph’s Ambrose Evans-Pritchard wrote that the bailout “is an economic pop-gun—but a political howitzer.” He wrote that the deal marked “a profound change in the structure and character of the European project.”

Why is this? The European Commission is composed of unelected leaders, which have power to make laws, raise funds from shared debt, and direct how those funds are spent. This means it has taken to itself the legislative and executive powers found in a national government, in addition to spending powers.

As Evans-Pritchard wrote, “Where else in the world does a single unelected body have the ‘right of initiative’ on legislation, and the executive powers of a proto-government, and the spending prerogatives of a parliament, all wrapped in one?” He warned that this power is “bordering on totalitarian in constitutional terms, mostly unchecked by meaningful parliamentary oversight.”

His most prescient description of the EU’s growing political power came in the form of one word: “Caesaropapist.”

This word carries connotations of imperial Rome and papal decrees. It is defined as a political system where there is one leader over both the imperial state and the church. Evans-Pritchard may have been likening the European Commission’s power to create and enforce fiscal policy to the power held by the emperors of Europe’s past. The Trumpet believes, however, that Europe will live up to this description literally.

As our regular readers know, we often reference Bible prophecies that say Europe will unite under one strong leader, with religion as its unifying force. Our predecessor magazine, the Plain Truth, founded by Herbert W. Armstrong, also watched for this. Mr. Armstrong wrote in 1978 that European nations would “give all their military and monetary power to the central ruler over the 10—the coming European leader” (co-worker letter, Aug. 14, 1978).

Europe’s recovery fund won’t save it from a coming economic crisis. As Mr. Armstrong warned, an economic crash in America “could suddenly result in triggering European nations to unite as a new world power larger than either the Soviet Union or the U.S. That, in turn, could bring on the Great Tribulation suddenly” (co-worker letter, July 22, 1984).

The meetings’ divisive nature points to another significant forecast. The Bible prophesies that this European power will be made up of 10 nations. The eurozone currently has 19 nations; the EU, 27. And it’s not working. It took months of negotiation and a 90-hour bitter meeting to get an inadequate bailout package passed. How will the bloc deal with bigger problems? The divisions on display at this meeting—between the “frugal five” and the rest—have not disappeared. Watch for this division to spread and for some nations to break away.

This will leave a much leaner, meaner and more effective European power. When that crisis comes, “Caesaropapist” rule will become reality for Europe—and it will shake the world.

“The coronavirus is hastening the arrival of the prophesied Holy Roman Empire,” wrote Trumpet editor in chief Gerald Flurry in the July Trumpet issue. “The Bible says 10 kings will rise in Europe in this end time, led by one overarching strongman. These kings will form the Holy Roman Empire. The coronavirus pandemic is helping usher in these 10 kings! We need to be thinking about these prophesied kings, who are rising now. … Many people have voiced fear that the recent crisis will destroy the European Union. But although it may look that way, Europe is in fact about to unite in a powerful way.”

To understand more, read Mr. Flurry’s article “Coronavirus and the Holy Roman Empire.” It will take you through what the Bible prophesies about the future of Europe—and how the coronavirus is pushing it in that direction.