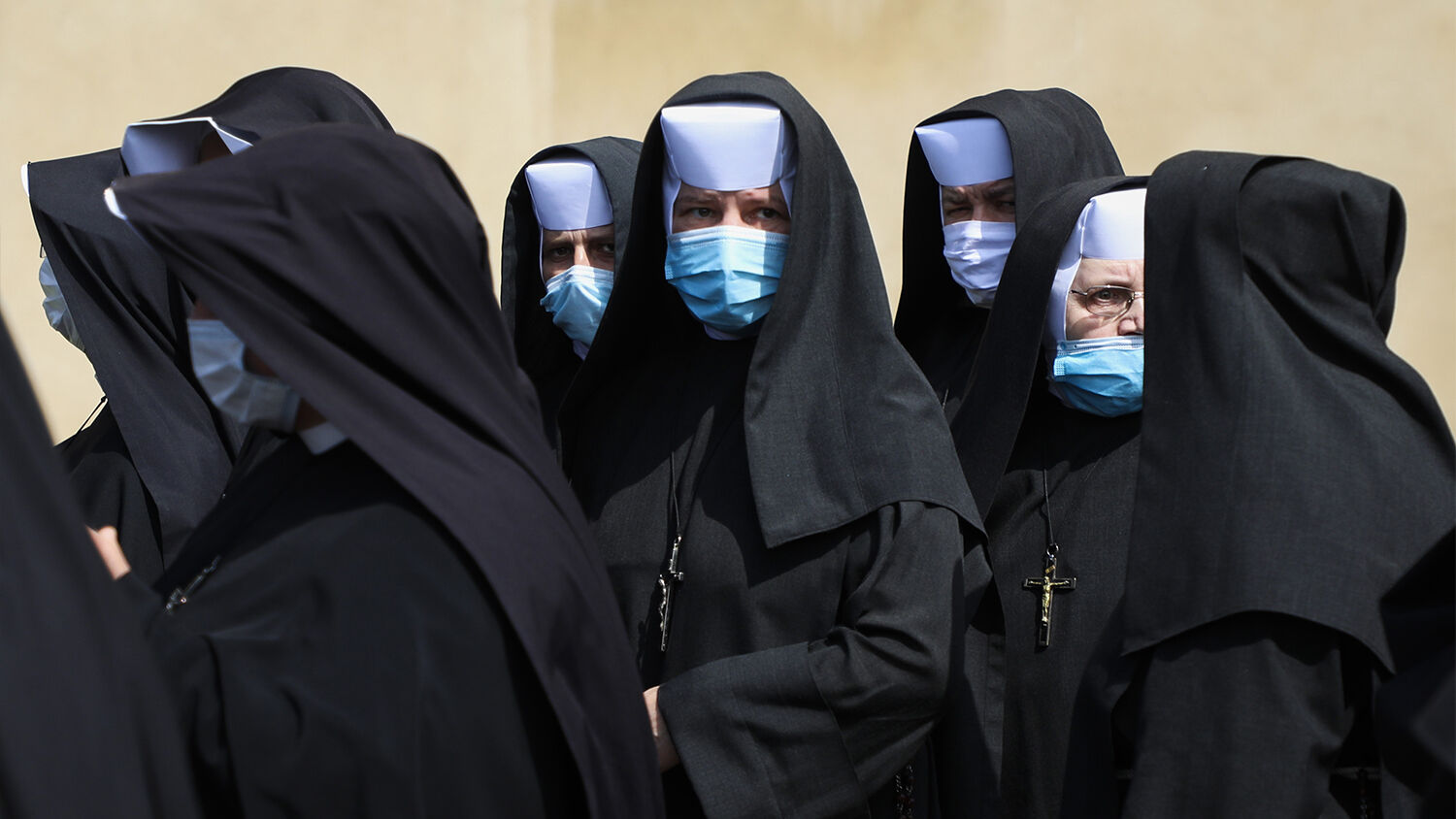 People fear that a religious revival could open ‘the gates to something darker.’

It was a narrow race in Poland, but the incumbent President Andrzej Duda beat challenger Rafał Trzaskowski in Sunday’s presidential vote, winning 51.2 percent of the vote. His election is part of a crucial trend: the rise of church-state cooperation in Europe.

“Many priests and bishops have agreed to a deal with the current world leaders,” deutschlandfunk.de noted. “They support the conservative nationalist PiS [Law and Justice] government from the pulpit and in many other ways. In return, PiS ensures them money and influence. In hardly any other EU country are the state and church as closely connected as in Poland” (Trumpet translation throughout).

“Every good Pole should know what the role of the church is … because beyond the church there is only nihilism,” stated PiS chairman Jarosław Kaczyński.

Kaczyński is seen as the puppet master behind Poland’s government. Through Duda, Kaczyński rules the country in a close alliance with the Catholic Church. Kaczyński has shaped PiS policies like no one else and has slowly formed Poland into a state dominated by Catholic edicts. Anna Grzymała-Busse, a political scientist, currently at Stanford University, wrote for Concilium Civitas:

The Roman Catholic Church in Poland continues to be the most politically influential church in the Christian world. It has achieved most of its policy goals, including the effective ban on abortion. The church is a major political figure. Priests have blessed soccer games—and they helped ensure Poland’s entry into the European Union in 2004. Thirty years after the collapse of communism, it continues to demand policies, and secular governments continue to accede to its demands.

Hardly any other European country upholds Catholic traditions as much as Poland does. While there is no official religion in Poland, 92 percent of the 38 million people living in Poland identify as Catholic. Poland is one of the few remaining countries in Europe where the Catholic Church’s influence has remained a key pillar of society. And the current ruling party only further increases the church’s influence. “Duda rides wave of ‘sacred tradition,’” the bbc reported.

But due to historic conflicts, the church’s connection with politics is also deeply disputed among Catholics in Poland. “An authoritarian party, Jarosław Kaczyński’s Law and Justice has shaken hands with fundamentalist Catholicism,” theologian and former Jesuit priest Stanislaw Obirek warned in a 2016 interview with German state broadcaster mdr. “A clear majority of the clergy openly calls for the PiS to be elected.” The church endorsed the government in sermons and in the media.

“Poland as the ‘bulwark of Christianity,’ the home of the ‘Millennium Pope’ John Paul ii—it’s an outlook the Polish Bishops’ Conference and the PiS government have in common. They feel they must defend themselves as much against the secularization of the West as against the supposed proliferation of Islam,” Deutsche Welle noted.

But what makes the Catholic Church in Poland so much more powerful politically than in other countries? Grzymała-Busse explained:

Put simply, its ability to work behind the scenes. The most influential churches do not rely on pressure at the ballot box or on partisan coalitions. Instead, they gain direct institutional access, essentially sharing sovereignty with secular governments. Such access can mean helping to write constitutions and everyday legislation, having a direct input into policymaking and policy enforcement, vetting secular state officials, and even running entire swathes of government. The channels of institutional access may vary considerably: actively participating in policy discussions and formulating legislative bills in special commissions, influencing personnel decisions and taking part in national negotiations during regime transitions. Churches ironically gain their greatest political advantage when they can appear to be above petty politics—exerting their influence in secret meetings and the back rooms of parliament, rather than through public pressure at the ballot box.

A church’s ability to enter these quiet corridors of power depends on its historical record of defending the nation—and thus gaining moral authority, the identification of the church with national interest.

The Catholic Church in Poland is even more powerful than it appears on the surface.

There is much about Poland’s government to admire. Almost uniquely in the Western world, it has taken a stand against the lgbt movement and has pushed back against abortion. Because the PiS won’t allow homosexual pride parades to take place wherever and whenever their organizers wish, left-wing journalists routinely label as authoritarian. In reality, Poland’s government is simply standing up for marriage and family.

However, there are signs of a dark side to this church-state relationship. One such sign comes from the way the government has dealt with the Catholic child-abuse scandal.

In country after country, the Catholic Church has come under attack for allowing its priests to abuse children and covering it up. However, in Poland the government is helping the church hide the scandal. Jacek Kucharczyk, president of the Institute of Public Affairs, one of Poland’s leading think tanks, summarized the PiS promise to churches: “As long as we are in power, you have nothing to be afraid of. There won’t be investigations into pedophilia; there won’t be any change in your privileged position in public institutions such as public schools and so on and so forth.”

This year, new cases of pedophilia in the Catholic Church in Poland have emerged. The people demanded action; however, the government kept its promise to the church. The PiS decided to set up a committee of inquiry. “However,” Deutsche Welle noted on May 27, “this would not specifically examine pedophilia in the church, but in all sectors of society.”

In 2019, a movie exposing clergy child abuse in the Catholic Church rose in popularity. Kaczyński called the film an “attack on the church” stating that the lgbt movement is the far greater threat to Poland’s children. “We are dealing with a direct attack on the family and children—the sexualization of children, that entire lgbt movement, gender,” he said. “This is imported, but they, today, actually threaten our identity, our nation, its continuation and therefore the Polish state.”

On the one hand, the Polish government claims to fight for the interest of its families and children, while at the same time it closes its eyes to revelations of worldwide clerical child abuse.

Some see the effects of rising secularism and promiscuity as concerning and destructive for the country. But is the revival of this church-state union the solution? Many in Poland fear it is not. abc television foreign correspondent Eric Campbell noted, “While many Poles believe a religious revival will lead their country to the light, others fear it is opening the gates to something darker.”

History also warns of the dangers in Poland’s close relationship with the Catholic Church. Throughout Europe’s history, governments that have worked closely with the church have been some of the Continent’s darkest and most tyrannical. They have suppressed knowledge, introduced erroneous and unbiblical teachings, abused power, and even caused the death of millions in inquisitions, religious wars and crusades (request a free copy of The Holy Roman Empire in Prophecy to learn more).

Many people who are aware of the church’s dark history still support the revival of church-state cooperation, claiming that the lessons have been learned and that a revival this time would lead to a better world. The Bible, however, reveals that the fear that a religious revival in Poland could open “the gates to something darker” is justified.

The Bible prophesies that the church-state union that has dominated Europe for centuries is reemerging. As theTrumpet.com’s Richard Palmer discussed on the Trumpet Daily Radio Show on July 14, many consider a revival of this alliance to be impossible. But the Bible’s prophecies are unfolding in astonishing detail today.

Based on Revelation 17, Daniel 2 and 7 and other prophecies, the late Herbert W. Armstrong predicted that Poland would break free from Communist rule and become a Catholic state again. In 1980, he noted: “It now looks entirely feasible that Yugoslavia may be included in this revived Roman Empire. Also the pope’s native Poland and Romania, and possibly Hungary. Add Austria, Germany, Italy, Spain, Portugal and France. There will be a union of 10 nations in the general area of the medieval Roman Empire in the new united Europe.”

While the Iron Curtain still separated Eastern and Western Europe, Mr. Armstrong prophesied that Poland would not only break free from Communist rule but, over time, return to its Catholic roots and turn into a dictatorship.

How Mr. Armstrong was able to make this astonishing prediction is explained in detail in He Was Right (free upon request). Mr. Armstrong’s free booklet Who or What Is the Prophetic Beast? gives a detailed explanation of these prophecies. This booklet also explains in detail how God will intervene in world affairs in a spectacular way to bring mankind true peace.

Step by step we are seeing these Bible prophecies move closer to fulfillment. You need to understand these prophecies.