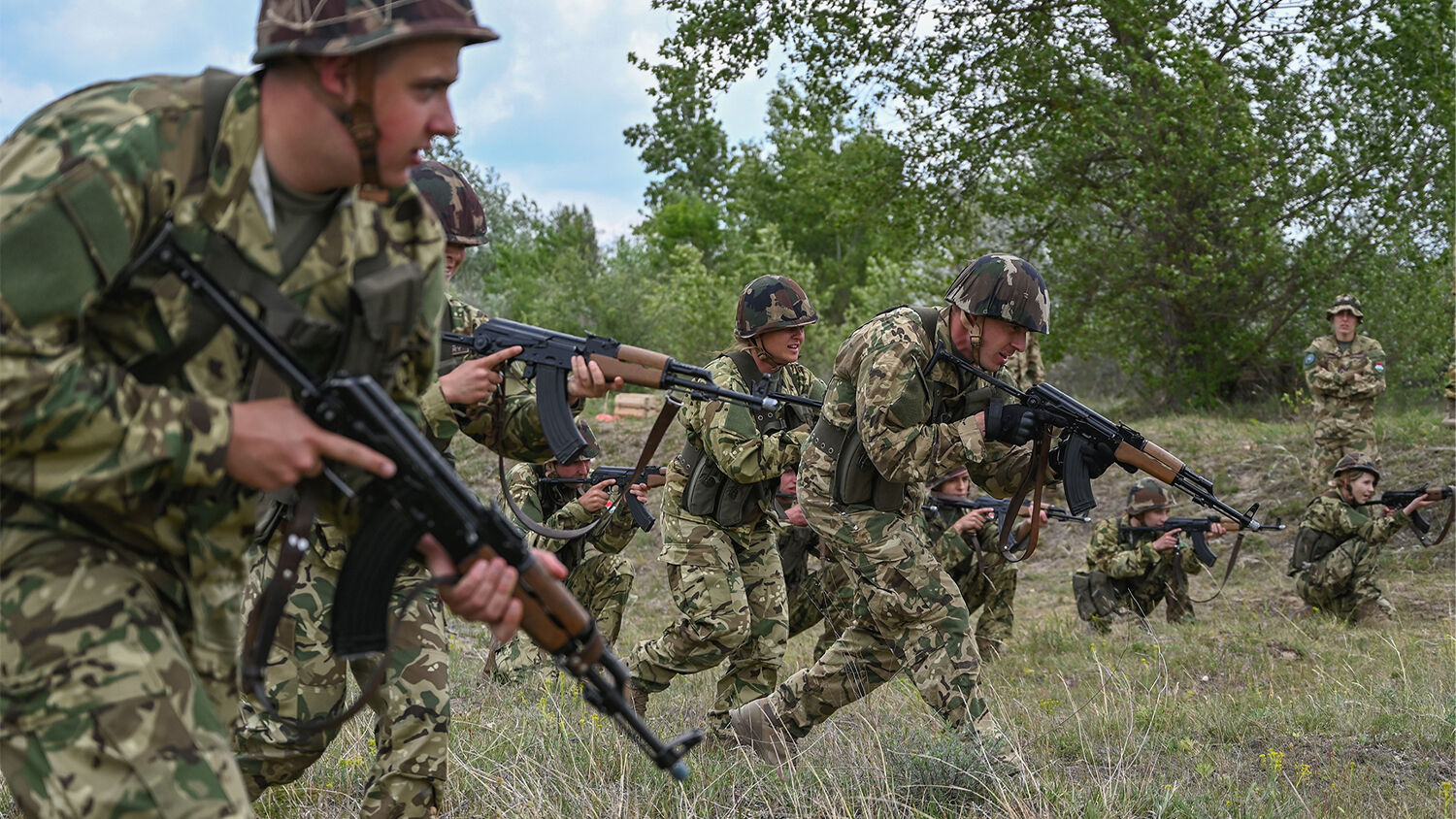 New recruits participate in a training exercise at the military camp in the north-western Hungarian city of Gyor on May 28, 2020.
ATTILA KISBENEDEK/AFP via Getty Images

Hungary, seeking to make its armed forces more compatible with Germany’s Bundeswehr, has purchased military technology from Germany. The first Leopard tanks, ordered in 2018, will be delivered to Hungary on July 24. “The Hungarian government wants to extensively convert its armed forces to the technology of the Bundeswehr,” n-tv.de noted on July 17 (Trumpet translation throughout).

During a visit by German Defense Minister Annegret Kramp-Karrenbauer, Hungarian counterpart Tibor Benkö said that Hungary wanted to get the majority of its new military purchases from Germany. He referred to the upcoming delivery of German tanks as an “extremely important event.”

Recent history shows why the delivery marks a turning point for all of Europe. Toward the end of World War ii, Hungary came under Communist rule and was controlled by the Soviet Union from 1949 to 1989. After the collapse of the Soviet Union, Hungary regained independence but retained close relations with Russia.

Hungary, once part of the Warsaw Pact, joined the North Atlantic Treaty Organization in 1999. But it continued to rely on Russian military technology to protect its borders. That changed in 2018 when the Hungarian Defense Ministry signed the contract with German tank manufacturer Krauss-Maffei Wegmann. Die Welt reported:

As a nato and EU member, the equipment of Hungary’s armed forces are regarded as a military-technical paradox, as there are still T-72 tanks in the depots. According to Krauss-Maffei Wegmann’s statement, Hungary is now also seeking “European solidarity” in terms of equipping its land forces. The project is “another step toward greater interoperability between the European armies.”

Benkö said Hungary wants to “switch from Eastern technology to Western technology.” Kramp-Karrenbauer referred to the meeting with Hungary’s representatives as “a meeting among partners” who work very close “in the area of security and defense policy and appreciate each other.”

Hungary has launched a large procurement program. And it is now switching from the Soviet T-72 tank to the German Leopard 2A7s tank. It also ordered German helicopters and the modern Panzerhaubitze 2000 self-propelled howitzers and switched to a different bridge-laying system and control system for air defense. The total cost is estimated to be significantly more than $1 billion.

Hungarian armed forces are committing wholeheartedly to the European project. During the Cold War, this development would have been considered very unlikely. Yet historically, Hungary has been closely tied with other central European countries, sharing their culture, religion and interest.

The kingdom of Hungary was ruled by the Habsburg dynasty from 1526 to 1867. Hungary and Austria formed the Austro-Hungarian Empire from 1867 to 1918.

Based on this history and numerous Bible prophecies, the late theologian Herbert W. Armstrong forecast Hungary’s alliance with Germany during the Cold War. In the May 1953 issue of the Good News, he wrote:

Suddenly the world will behold a United States of Europe! Some of the Balkan nations which have been under Russia’s boot will be members of it! Ten dictators in Europe will unite, in a gigantic European combine, turning their united military power and resources over to the new leader of Europe! Not only this, but a great religious leader will also emerge, in a world-shaking pact with the military leader which will far overshadow the effect of the Hitler-Stalin nonaggression pact of 1939!

It will be a union of church and state. The religious influence will be used to cement together, and unify, these 10 nations in Europe. These will include Germany and Italy, probably Spain and Portugal and France, Greece, and probably some of the Balkan nations from among Yugoslavia, Austria, Czechoslovakia, Hungary, Bulgaria, Romania or others.

You can see trends taking place now that are leading to the fulfillment of what Mr. Armstrong warned about.

We are seeing the military empire form under German rule that is prophesied in the Bible. For more detailed information on these trends, please read our article “Why the Trumpet Watches Europe’s Push Toward a Unified Military.”

The Bible refers to the German military empire with the prophetic symbol of a beast and notes that 10 nations or groups of nations will join this empire. Revelation 17:12-14 read: “And the ten horns which thou sawest are ten kings, which have received no kingdom as yet; but receive power as kings one hour with the beast. These have one mind, and shall give their power and strength unto the beast. These shall make war with the Lamb, and the Lamb shall overcome them: for he is Lord of lords, and King of kings: and they that are with him are called, and chosen, and faithful.” This soon-coming empire will be the final resurrection of the Holy Roman Empire, which has plagued the world throughout history.

This final resurrection is taking shape—and we’re seeing it prophesied in the news. Our free booklet He Was Right explains many of these prophecies that Mr. Armstrong proclaimed that are now being fulfilled or already have been fulfilled. It also explains why Mr. Armstrong’s Bible-based forecasts still guide the Trumpet’s news analysis today.

We must watch Europe. We are gradually seeing increased cooperation, which will soon lead to full unification.