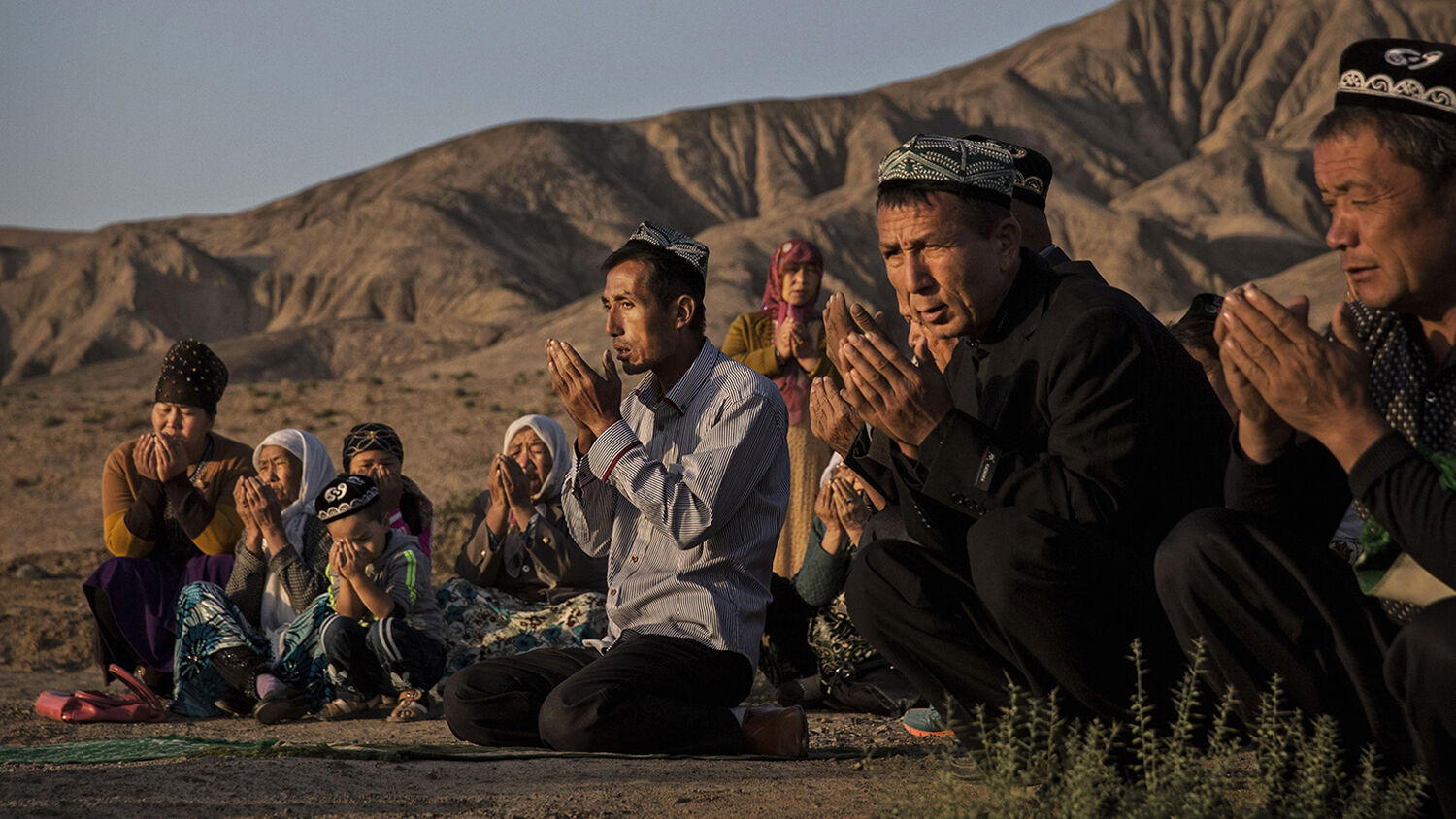 A Uyghur family prays at the grave of a loved one on Sept. 12, 2016, at a local shrine and cemetery in Turpan County, in the far western Xinjiang province, China.
Kevin Frayer/Getty Images

Through forced sterilization, abortions and other birth control methods, China is slowly wiping out its Muslim population.

In China’s far-west Muslim-dominated region of Xinjiang, data has emerged showing that since the government began a tightly controlled police state in the region four years ago, it has also implemented a systematic program of what some experts have called “slow, painful, creeping genocide.”

The data emerged in a June report compiled by Adrian Zenz at the Jamestown Foundation and is based on government statistics, state documents and interviews with 30 ex-concentration camp detainees, family members and a former camp “instructor.” What it lays bare is a previously unreported widespread, systematic genocide. Through this program, Chinese President Xi Jinping has embodied the spirit of history’s genocidal maniacs such as Adolf Hitler, Joseph Stalin and Mao Zedong.

Since coming to power, Xi has revoked China’s one-child policy and actively worked to encourage the Han Chinese to have more children. This has led to a dramatic drop in the use of birth control methods around the country. In Xinjiang, however, their use has dramatically increased.

As the government works to reduce its Muslim population, Uyghurs and other minorities have been forced by the state to receive pregnancy checks, inter-uterine devices (iuds), abortions and sterilization. While having up to three children is technically legal, some families with three or more children have been heavily fined. Those who cannot pay are dragged to detention camps, which are said to hold 1 million to 3 million detainees. While the state calls them “reeducation camps” for “vocational training,” they are indoctrination camps with violence akin to concentration camps.

For some, even complying with the government’s demands is not enough. Chinese-born Kazakh Gulnar Omirzakh complied with an order to have an iud inserted after having her third child in 2016. Yet in 2018, officials issued her a $2,685 fine for having more than two children. If she did not pay within three days, she, like her husband, would be thrown in an internment camp.

Some camps in the region are primarily comprised of women imprisoned for having too many children. Inside the camp, the population control measures continue. Tursunay Ziyawudun recounted her time there, where she was injected with what appears to be pregnancy prevention shots until she no longer had her cycle. During interrogations she was repeatedly kicked in the lower stomach. She can no longer have children and is often in excruciating pain with bleeding from her womb.

Other women in the camp are forced to have iuds, are sterilized, or threatened with abortions if found pregnant.

These things are happening not only inside the camps, they are also being forced on Muslims throughout Xinjiang. Since 2016, Xinjiang’s government has pumped multiple millions of dollars into birth control procedures. While iud use was dropping around China, in Xinjiang, iuds increased by 60 percent from 200,000 inserted in 2014 to 330,000 in 2018. The region is only comprised of 1.8 percent of the population, but in 2018, it accounted for 80 percent of all iud placements in China. Sterilization surgeries also dropped nationwide, but in Xinjiang the government began a mass sterilization campaign, with surgeries increasing sevenfold from 2016 to 2018.

By 2019, Xinjiang planned to subject >80% of women of childbearing age in the southern minority regions to intrusive birth prevention surgeries (IUDs or sterilizations). In 2018, 80% of new IUDs in China were fitted in XJ (region only makes up 1.8% of national population). /8 pic.twitter.com/LBQVfYB08j

But the attack is coming from other angles too, including genocide by father replacement. As Muslim men are carted off to detention camps, some of their wives are being given to Han Chinese men to breed their race out of them.

Han Chinese are also being lured to the region with lucrative jobs, land offers and economic subsidies to shift the population balance in the region.

Add to this the internment camps, called orphanages or boarding schools, for minority children, many of whose parents were detained. Very little is known about what goes on there or how many children are detained. Inside, the children are taught in Chinese and forced to sing and dance to propagandist songs. While the government claims the boarding schools are necessary to protect children from “extreme thought,” the barbed wire, fencing and surveillance cameras indicate this is not about protection. It is a detention camp with indoctrination in China’s government-mandated “extreme thought” to ensure the children lose the knowledge of their culture, language and religion and can be controlled by the state.

What is the result of all of this? Xinjiang has gone from one of China’s fastest-growing regions to one of its slowest. In the two biggest prefectures in Xinjiang, the birth rate plummeted 84 percent from 2015 to 2018. These areas are majority Uyghur.

One Uyghur region set a near-zero target growth rate for 2020 to be achieved through “family planning work.” Xinjiang also planned that by 2019 at least 80 percent of women of childbearing age in four southern Uyghur prefectures would receive iuds or sterilization, “with actual shares being much higher,” Zenz wrote.

Zenz’s report points out that since internment camps began, the number of widowed or menopausal 18-to-49-year-olds has more than doubled in one Uyghur region, indicative of what is probably the trend in many Uyghur-dominated regions. This is likely the result of both the unnatural deaths of husbands, particularly in internment camps, as well as pregnancy-prevention shots that stop a woman’s cycle.

Zenz wrote that his report provides “the strongest evidence yet” that China is in violation of the United Nations Convention on Genocide. The bill stipulates that genocide includes “imposing measures intended to prevent births within the group.”

Darren Byler of the University of Colorado said that the goal may not be the full elimination of the Uyghur population, “but it will sharply diminish their vitality, making them easier to assimilate.” In his report, Zenz wrote that the policy was “intended to reduce the Uyghur population in Xinjiang relative to the numbers of ethnic Han Chinese” to “promote more rapid Uyghur assimilation into the ‘Chinese nation-race.’” He also pointed out that it was “part of a wider control campaign to subjugate the Uyghurs.”

“Populations that do not grow as quickly and rapidly are easier to control as part of Beijing’s coercive social reengineering strategy in the area,” Zenz emphasized.

China has said that these measures are necessary to stop excessive births causing poverty and extremism. It also said the measures are part of its “strike hard campaign against violent terrorism.”

Xinjiang is crucial to China as it forms a pivotal part of its Belt and Road Initiative link into Asia. Because of its location and population makeup, it has been a flashpoint for tensions throughout history. The region has long been contested by the Mongols, Chinese and several Turkic groups. It has been under China’s control since the 1700s; however, it has experienced terrorist attacks throughout this time as the Uyghurs and other Muslim minorities have sought greater independence. This has only caused China to tighten its grip on the region to a level in these past four years that the region has never seen before.

So whether Xi is working toward complete genocide or not, the measures he is taking in the region show his determination to solidify his unquestioned rule as the country’s strongman. China is following the same trend in Hong Kong, Taiwan, other nations with its Belt and Road Initiative and throughout the South China Sea. Xi is amassing great power. The more people and nations he can bring under his party’s control, the stronger China will be.

In Luke 21:24, Jesus Christ prophesied of a coming “times of the Gentiles.” This is the time when the once dominant Israelites will decline and Gentiles will rise to fill that power vacuum. Who are these “Gentiles”?

In “What Are the Times of the Gentiles?” Trumpet editor in chief Gerald Flurry wrote, “Once you understand who Israel is, then you can understand how the Gentiles—the non-Israelite peoples—have started to take charge of the world right now.” To prove the modern identity of Israel, read Herbert W. Armstrong’s free book The United States and Britain in Prophecy.

Mr. Flurry continued, “China’s actions prove that Gentiles are rising to power before our eyes! And this is just one of many Gentile nations growing more aggressive on the world scene.”

Christ’s description of these times continues in Luke 21, “Men’s hearts failing them for fear, and for looking after those things which are coming on the earth: for the powers of heaven shall be shaken. And then shall they see the Son of man coming in a cloud with power and great glory” (verses 26-27). The times of the Gentiles will be a period of great fear, but these verses show that it leads right up to the return of Jesus Christ! This is the exciting vision to be filled with during these terrifying times.

For more information on why China is amassing strength and how it will use that power in the future, please read our free booklet Russia and China in Prophecy.