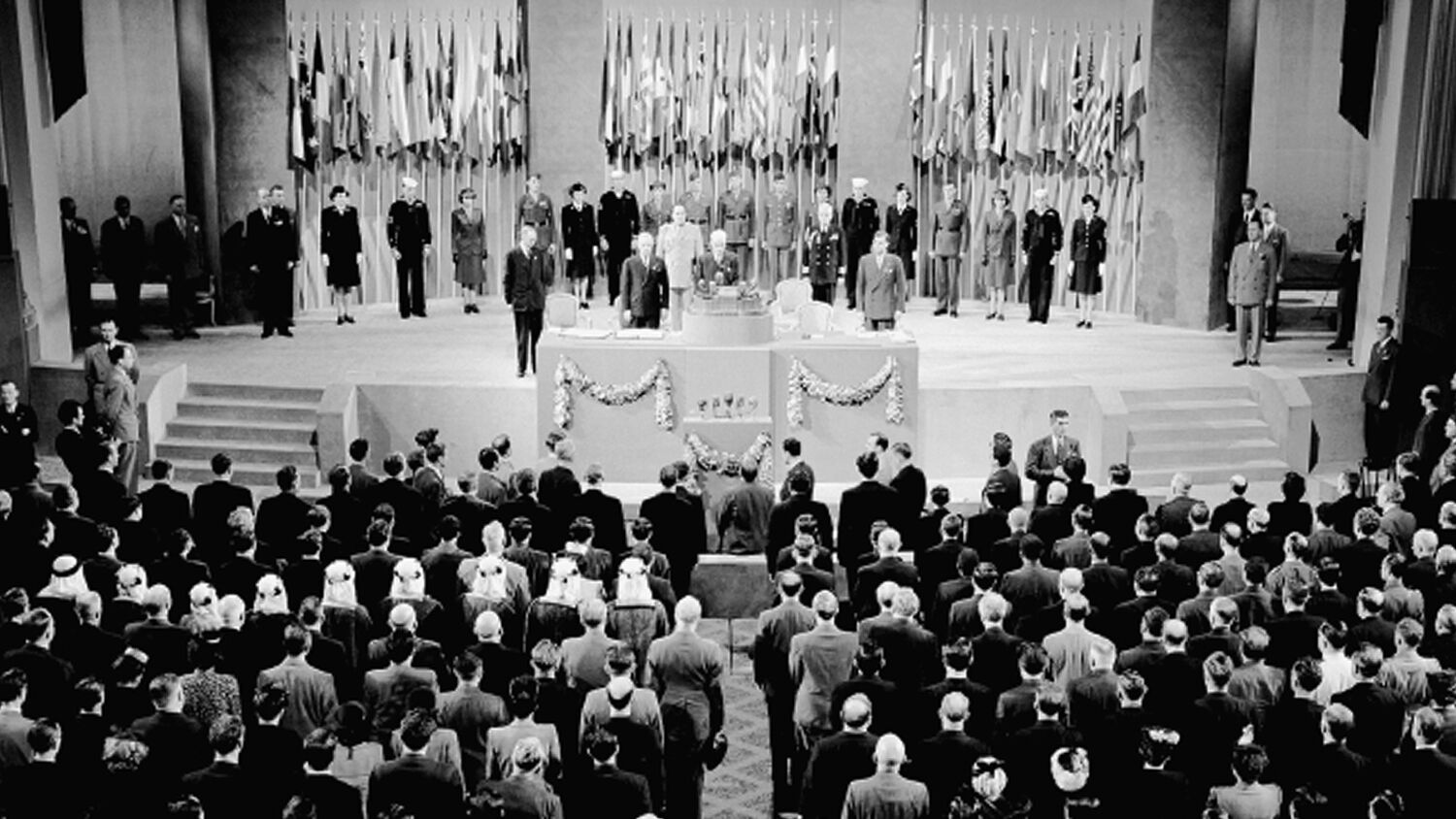 The 16th Plenary Assembly of the founding conference of the United Nations at the Opera House of San Francisco, 1945.
Fine Art Images/Heritage Images/Getty Images

Another anniversary proving man does not know the way of peace

“Already I see the clouds of World War iii gathering at this conference. I do not see peace being germinated here, but the seeds of the next war!”

Herbert W. Armstrong, the “unofficial ambassador of world peace,” spoke those words in 1945, following the first session of the United Nations. And now, on the 75th anniversary of that day, it is clear that his prophecy was startlingly accurate.

“[T]he United Nations conference was producing nothing but strife and bickering and was destined from its inception to end in total failure,” Mr. Armstrong proclaimed. “Yet world leaders were pronouncing it the world’s last hope—with the only alternative annihilation of humanity!”

On this day, 75 years ago, delegates from 50 countries around the world signed the UN founding charter. The Allies had just the month before announced victory in Europe and would accept the Japanese surrender a little over two months later. The world had just witnessed the most devastating war in human history and vowed to never repeat it.

“We the peoples of the United Nations determined to save succeeding generations from the scourge of war, which twice in our lifetime has brought untold sorrow to mankind,” begins the charter.

But since the founding of the UN, the world has been engulfed in more than 300 wars and 3,000 other military conflicts. Despite all this, UN Secretary General António Guterres used the 75th anniversary as an opportunity to praise the UN for its greatest achievement: avoiding World War iii.

World War iii may not have happened—yet—but that’s no definition of success. More people have died in the wars and conflicts since 1945 than in all of World War ii.

Add to this the many other failings of the UN—most notably, its human rights hypocrisy. The UN is comprised of 156 special organizations, many of which are focused on human rights, but the member nations on those boards are shocking. For example, Venezuela, Cuba and China all sit on the Human Rights Council; and Iran now has a seat on the UN Women’s Rights Committee. With these two examples it is obvious why the UN has accomplished very little in the last 75 years.

This hypocrisy led to the United States to withdraw from the Human Rights Council and since then decrease its support and funding for the UN. Other nations are following suit, such as Australia, which came out recently with strong language against the UN and has decreased its funding by 27 percent since 2013.

So where have the last 75 years brought us? To where Mr. Armstrong prophesied from day one, when he wrote it “was destined from its inception to end in total failure.”

We write in our free booklet He Was Right:

As time has gone by, the UN has descended from a failure to a farce. Sir Anthony Parsons, British ambassador to the UN from 1979 to 1982, declared it “a disastrous failure.” Jeane Kirkpatrick, American ambassador to the UN in the early 1980s, said it was “nothing more than a place for the nations to let off rhetorical steam.”

Mr. Armstrong knew it would be this way because he understood human nature as revealed in the Bible. Romans 3:17 says that “the way of peace have they not known.”

When the UN was established 75 years ago, it was the work of men who genuinely wanted peace; but they did not know the way to peace.

But just because the UN has failed and man does not know the way to peace, does not mean that there is no hope. “Now God must step in—or we perish!” Mr. Armstrong wrote.

He Was Right continues:

[Mr. Armstrong] saw, by prayerfully studying the Bible, that peace would never come on Earth by mankind; it could only be possible by Jesus Christ, upon His return with His world-ruling government to usher in utopian peace and harmony (Revelation 20:4-6; Isaiah 2:2-4; 9:6-7; 11:1-9). …

The UN’s failed efforts to bring peace to the world will soon be replaced by wonderfully successful efforts spearheaded by Jesus Christ—the Prince of peace (Isaiah 9:6). He will rule the entire Earth, uniting all nations in His way of prosperity!

That is man’s only hope for peace. That is prophesied clearly in the Bible. Mr. Armstrong restated it for many to hear. The Trumpet prophesies the same message today so that even more can hear it. And in a very short time, that prophecy will mercifully come to pass!

As the world marks the 75th anniversary of this failed institution, there is hope ahead. You can learn about this vision of peace and unity that will soon fill the world in Mr. Armstrong’s free booklet The Wonderful World Tomorrow—What It Will Be Like.