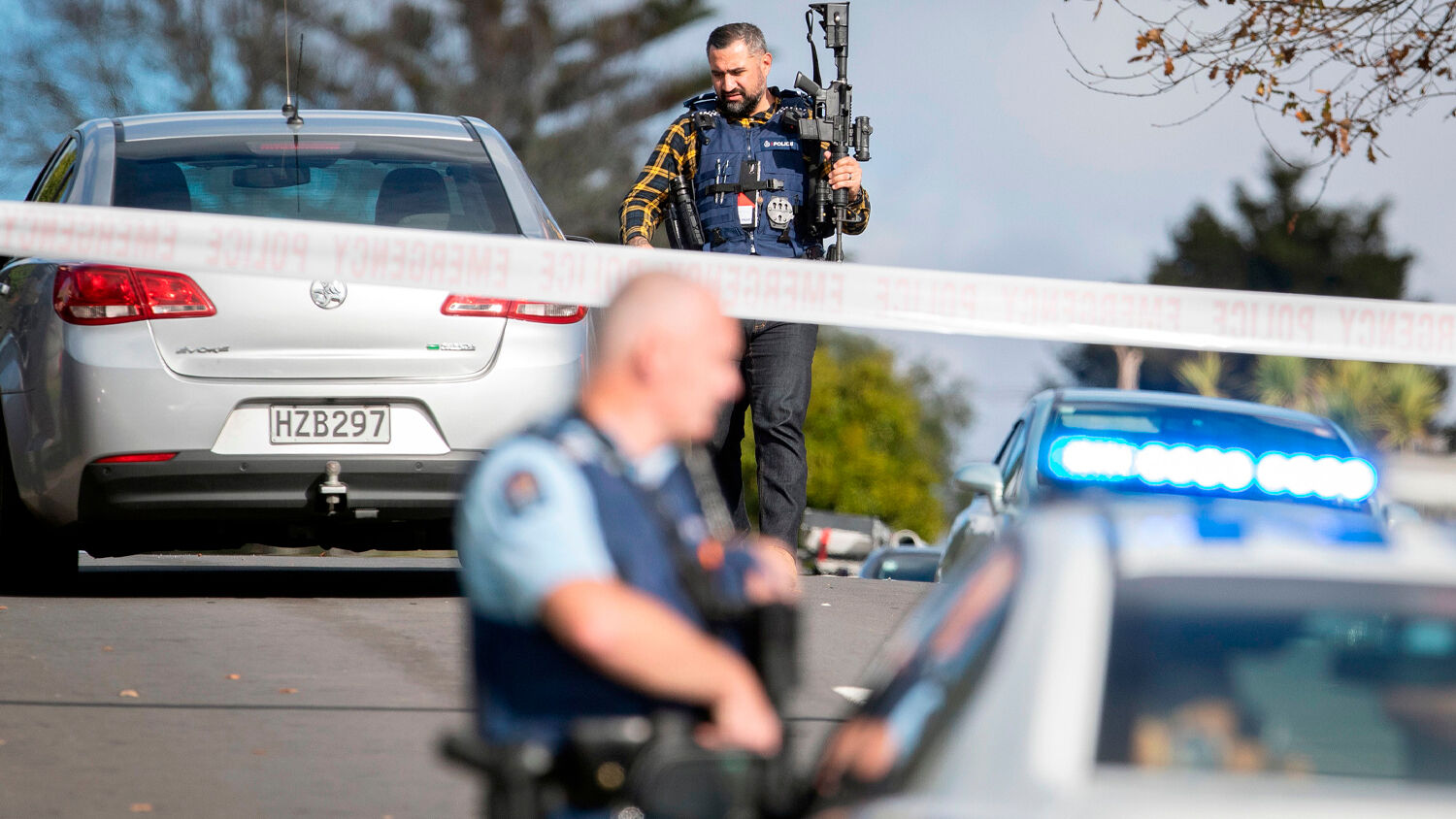 Police officers cordon off an area after a shooting in a residential neighborhood in Auckland on June 19.
GREG BOWKER/AFP/Getty Images

A deadly shooting in New Zealand downs two officers even as protesters decry ‘police brutality’ and the commissioner pledges to keep police unarmed.

What started as a routine police stop in West Auckland, New Zealand, on June 19 quickly turned into a violent incident that left two police officers shot, one killed, and a pedestrian injured. The incident occurred only days after a landmark decision to keep New Zealand’s police forces unarmed.

After the gunman escaped and a manhunt ensued, the community was shut down and police swarmed the streets. Three individuals connected to the attack were eventually arrested.

While the incident itself is tragic, the political circumstances surrounding it are troubling.

New Zealand has long had an unarmed police force. Patrol cars can be equipped with firearms that are kept in a lockbox and require permission to use. That was on the table to change following the 2019 Christchurch mosque massacre. A six-month trial of “Armed Response Teams” began, with police officers patrolling with firearms in three different regions. After the trial ended in April, it was decided on June 9 that police would continue to patrol unarmed. New Zealand Police Commissioner Andrew Coster said:

It is clear to me that these response teams do not align with the style of policing that New Zealanders expect. I am committed to New Zealand Police remaining a generally unarmed police service. How the public feels is important—we police with the consent of the public, and that is a privilege.

But now those words ring hollow.

The commissioner’s decision came with heavy political pressure. Much of the Western world is experiencing protests against alleged “institutional” police brutality after George Floyd was killed in Minneapolis, Minnesota, while under police custody.

United States media lauded New Zealand’s decision to commit to unarmed policing. In “As New Zealand Police Pledge to Stay Unarmed, Maori Activists Credit U.S. Protests,” npr wrote, “The indigenous Maori people in particular have pushed back against police use of force, which disproportionately affects them.”

“New Zealand police were warned before and during their controversial [Armed Response Teams] trial about the ‘severe’ consequences of not having consulted with Maori,” reported the New Zealand Herald.

npr further highlighted that while they make up only 25 percent of New Zealand’s population, “66 percent of people shot by police have been members of the Maori and Pacific Islander communities.” Maori lawyer and activist Julia Whaipooti praised George Floyd for having “saved lives of Maori people in this country” and influencing the subsequent decision not to arm the police. Days later, as Black Lives Matter protesters flooded New Zealand’s streets, one of the group leaders (cofounder of ArmsDown—a website with the slogan “Get Those Guns Off Our Streets”) addressed the crowd, saying that New Zealand police “hunt Maori like a hunting sport.”

But a look at the raw numbers shows that accusations of New Zealand police “brutality” and “hunting” are incredibly unfair. And percentage-based statistics of deaths at the hands of New Zealand police are so low in real numbers that they can hardly be used as a metric. In the 76 years of record-keeping from 1941 to 2017, a total of 35 people were killed by New Zealand police—less than one every two years. In that same time period, 26 police officers were killed in the line of duty—about one every three years. After the June 19 incident, another will be added to that tally.

As protests against “police brutality” sweep New Zealand, Australia, the U.S., United Kingdom, Canada and elsewhere, it is the police who are facing unprecedented, violent attacks. It is the police who need support now more than ever. In the U.S., as a result of the protests and rioting, around half a dozen officers have been killed. Nearly 1,000 officers in the U.S. and UK have been wounded, some seriously—including paralyzation. Leaders in the U.S. Democratic Party have echoed support for the Black Lives Matter movement’s call to “defund the police”—or even abolish the police altogether.

This, together with a general negative portrayal across much of the mainstream U.S. media and either lack of backing or outright condemnation from certain state officials, has led to police morale sitting at an all-time low.

And now in “peaceful” New Zealand, police officers have been shot and killed against the backdrop of protests calling out “police brutality” and “hunting,” amid calls to disarm our already essentially unarmed police force.

Violence against anyone is reprehensible—but violence against law enforcement is especially so, and all the more when it is accompanied by calls to hobble, defund or dismember that law enforcement. This particular trend across the West, particularly in our English-speaking nations, has been closely followed by the Trumpet for three decades. We address the cause of these issues and where they are leading—not just the news.

Our new issue of the Trumpet newsmagazine (free upon request) is dedicated to this subject, addressing it from a biblical perspective. In particular, read our article “Surrendering to Lawlessness,” which explains the real reason why police forces in New Zealand, Australia, Canada, the UK and the U.S. are targeted for brutal violence—and are, at the same time, the very ones accused of the crimes for which they suffer.