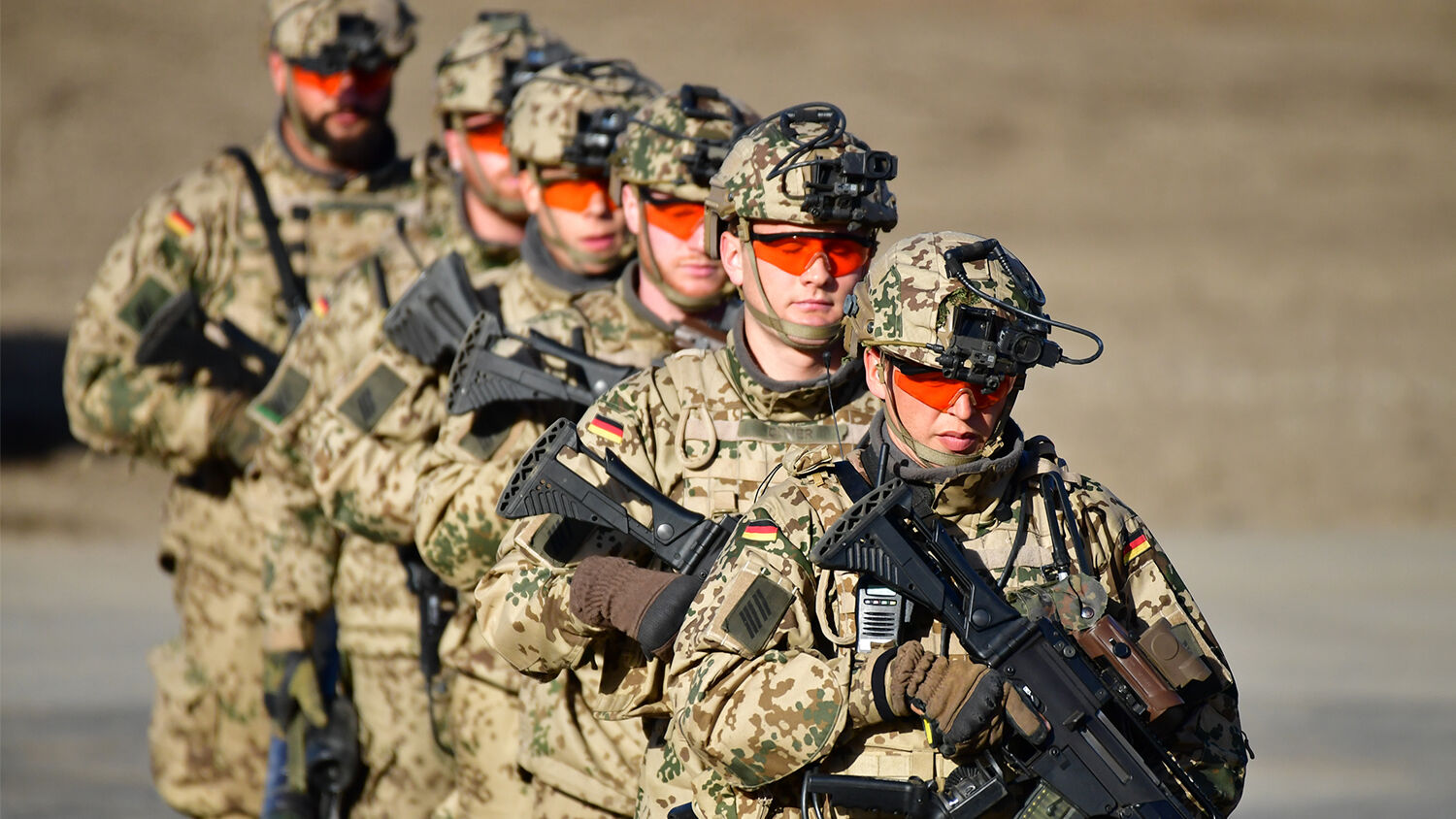 Armoured infantryman of the Bundeswehr, the German armed forces, demonstrate their skills during a three-day Bundeswehr exercise.
Getty Images

Berlin makes another change in tone on military power.

German defense companies will receive $11 billion in stimulus payments to make up for any shortfall caused by the coronavirus, reported Defense News on June 10. This veiled boost for Germany’s armed forces ushers in a “new tone” in a country viewed to be averse to war.

“Now that we want to revive the economy, it makes no sense to cut the defense budget as a source of public spending,” Defense Minister Annegret Kramp-Karrenbauer told Defense News.

Germany spent $49.3 billion on its military in 2019. It is currently the world’s seventh-highest military spender. If it decided to spend the full nato-mandated 2 percent on defense, it would catapult into third place, higher than Russia. Germany is also the world’s fourth-largest weapons exporter after the United States, Russia and France.

In 2020, Germany intends to spend $55.2 billion on its military. After the coronavirus bailout is applied, a more accurate number would be around $66 billion. This is roughly $1 billion more than Russia spent in 2019.

To be eligible for the relief payment, a company must possess a high share of workers within Germany, and it must be ready to begin a defense project this year or the next. This will serve as incentive for more companies to team up with others in support of Germany’s military industries.

Within the defense sector, several main projects could benefit from the money. One is the mks-180, Germany’s new multipurpose combat ship. It is being built by the recently merged “national champion” of shipbuilding, Lürssen and Kiel naval shipyards.

There is also Airbus, which makes both civilian and military air and space crafts. Germany holds the second-largest share in the company, after France. Airbus is currently designing the replacements for the Eurofighter, the Future Combat Air System. It also produces and services satellites, transport aircraft, fighter jets and attack helicopters, in addition to a variety of sensors.

mbda, which builds missiles for the Eurofighter, is another trans-European company with a division headquartered in Germany. Large German companies such as Rheinmetall and Krauss-Maffei Wegmann build tanks and other armored vehicles.

It’s not hard to see how the coronavirus relief package could help Germany accelerate and achieve its defense goals on land, sea and air.

Germany has been unwilling to spend its nato-mandated 2 percent of gdp on defense. Yet when it comes to European or national defense, it appears more eager to get involved. “The fact that a defense earmark is included in the package as an explicit instrument for helping industry sets something of a new tone in a country where defense sector dealings are traditionally treated as a necessary evil in the business of geopolitics,” wrote Defense News.

Is Germany’s attitude toward its military shifting?

During the Cold War, Germany’s military capabilities had reached a low point, being dependent on the U.S. to secure its own borders. Today, Germany is stronger today, albeit not strong enough to stand up to Russia alone.

However, that will soon change. History shows that this powerful nation has the ability to rapidly rearm, with world-altering effects. It can easily happen again.

In his first volume on World War ii, The Gathering Storm, Winston Churchill recorded a speech he gave to the House of Commons on the threat of a rapidly rearming German military, especially its air force. He stated, “It is well known that those very gifted people, with their science and with their factories … are capable of developing with great rapidity the most powerful air force for all purposes, offensive and defensive, within a very short amount of time.”

From the unification of Germany in 1871, through the Franco-Prussian War and two world wars, this trend has been repeated. Germany has been a fearsome force and will be so again. Its economic strength, industrial development and vulnerable geographic position make this inevitable. That may sound shocking. But Bible prophecy says it will happen.

The book of Nahum contains a prophecy for modern-day Germany, a nation descended from the ancient Assyrians.

Secular and biblical history agree that this nation was a mighty military power for much of its existence. Its military power is now returning. What if a strong leader were to harness it? After World War ii, many key leaders and industrialists of the Nazi party went underground. But the party’s violent ambitions never truly died. They will be back.

The Bible warns of exactly this situation.

“Thy crowned are as the locusts, and thy captains as the great grasshoppers, which camp in the hedges in the cold day, but when the sun ariseth they flee away, and their place is not known where they are” (Nahum 3:17). Trumpet editor in chief Gerald Flurry explains the context of this scripture in his free booklet Germany and the Holy Roman Empire. “After World War ii, the Nazis just went underground and disappeared like grasshoppers in wintertime. Suddenly, they were gone. But just as suddenly, they have burst back on the world scene. That’s exactly the way God foretold it was going to happen in this end time.”

Germany looked weak, especially after World War ii. However, today it is preparing once again for competition with other great powers. Building highly advanced combat systems, such as the mks-180 and the Future Combat Air System, is a crucial part of achieving this goal.

Germany will soon become the head of a 10-nation European power that will plunge the world into war one final time. The good news, also foretold in the Bible, is that this will be the final time it ever does so.

For more on Germany’s prophesied role in a coming European superpower, read our free booklet Germany and the Holy Roman Empire.