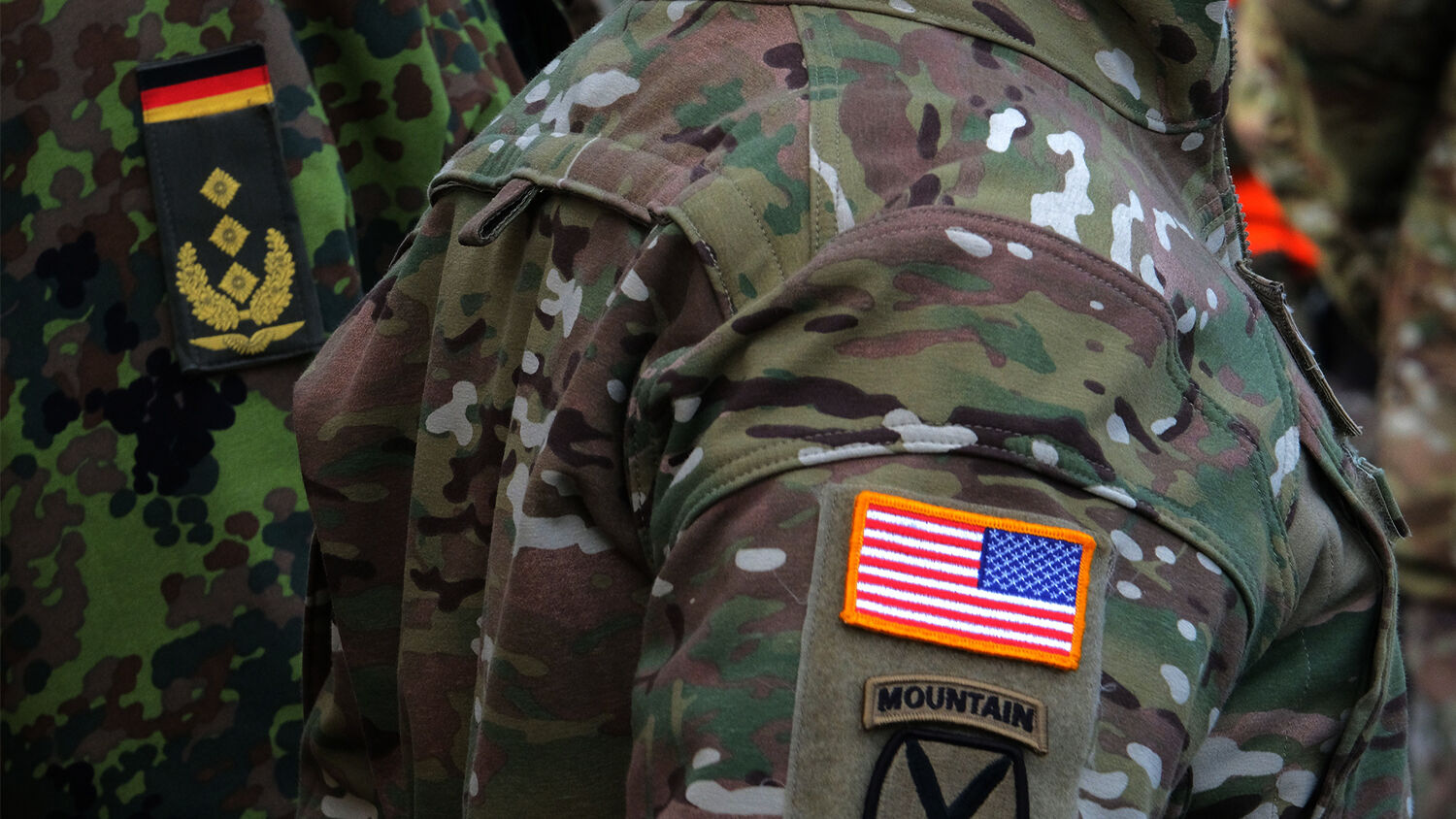 U.S. and German flags are seen on the outfits of military personnel during the unloading operation of U.S. military equipment of the 2nd Brigade Combat Team, 3rd Infantry Division, ahead of the Defender 2020 international military exercises at the Port of Bremerhaven, Germany on February 21.
AFP/Getty Images

As tensions with the United States increase, calls for a united European military are getting louder.

Marking another low point in Germany’s relationship with the United States, U.S. President Donald Trump has reportedly ordered the withdrawal of up to 9,500 of America’s 34,500 troops in Germany, the Wall Street Journal reported on Friday. Many were caught off guard by this announcement.

“We are close partners in the trans-Atlantic alliance. But it is complicated,” German Foreign Minister Heiko Maas told Bild. “Should a part of the U.S. troops be withdrawn, we will be taking note. We appreciate the decades of cooperation with the U.S. armed forces. It is in the interest of our two countries” (Trumpet translation throughout).

“By all accounts,” Spiegel Online noted, “the U.S. government had not previously informed nato partner Germany of the decision as usual. Because of the scope of the plans, this can be seen as a provocation.”

Frederick Benjamin Hodges, former head of the Allied Land Command, called the decision “a colossal mistake.” “Congress was not informed, the U.S. commanders in Europe were unsuspecting, and nobody spoke to Germany or nato,” Hodges told Spiegel.

“This is completely unacceptable, especially since nobody in Washington thought about informing its nato ally Germany in advance,” Peter Beyer, a member of Chancellor Angela Merkel’s party, told Rheinische Post.

The removal, however, should not come as much of a surprise, especially considering the warning from former U.S. Ambassador to Germany Richard Grenell last year. He said a pullout was likely if Germany failed to increase its defense spending to reach nato’s goal of 2 percent of a nation’s gross domestic product.

The U.S. has provided Germany’s security for many decades at a high cost. In light of Germany’s refusal to contribute its share to nato, and its increased hostilities toward U.S. policies, President Trump’s decision is understandable.

Ever since Trump’s inauguration, the German-U.S. relationship has been visibly strained. This latest announcement is another blow to that relationship.

“[A]lready one can see that the more united Europe becomes, the greater its tensions with the United States,” writes bestselling author Robert Kaplan. “A true European superstate with armed forces and a single foreign policy at its command would be both a staunch competitor of the U.S. and possibly the dominant outside power in the equidistant zone of southern South America.”

Parliamentary group leader of the Social Democrats Rolf Mützenich told Funke media group that a large withdrawal of U.S. troops would mark “a turning point.” He also indicated that it could serve as an opportunity to “embed” German security policy in a European framework. This, he claimed, would be urgently necessary considering the U.S.’s current policies.

For many years, the Trumpet has predicted that hostilities between Germany and the U.S. would intensify as Europe pushed toward a united army. The late Herbert W. Armstrong proclaimed in May 1953 that “10 powerful European nations will combine their forces.” This predication, based on Bible prophecy (see Daniel 2 and Revelation 17), should alarm the world.

In a prophetic vision, the Apostle John saw a beast, representing a world empire, with 10 horns: “And the ten horns which thou sawest are ten kings, which have received no kingdom as yet; but receive power as kings one hour with the beast” (Revelation 17:12). Our Trends article “Europe’s Push Toward a Unified Military” explains:

This union of 10 kings is clearly a military union. The Bible says these kings shall “make war” (verse 14).

Many other passages warn of a great war-making power in this end time. In Isaiah 10:5-7, God says that He has raised up Germany—end time Assyria—to “destroy and cut off nations not a few.” Habakkuk talks about the same time period, calling the end-time European power “Chaldeans”—this time referring to the religious nature of this power. He describes them as a “bitter and hasty nation, which shall march through the breadth of the land, to possess the dwelling places that are not theirs.”

As hostilities toward America grow, expect the push for a European superstate to intensify.

You can read more about this trend and the underlying prophecies in “Europe’s Push Toward a Unified Military.” Also request a free copy of Daniel Unlocks Revelation. As we see Europe and America drift further and further apart, it’s crucial to understand where the Bible reveals these trends are leading.