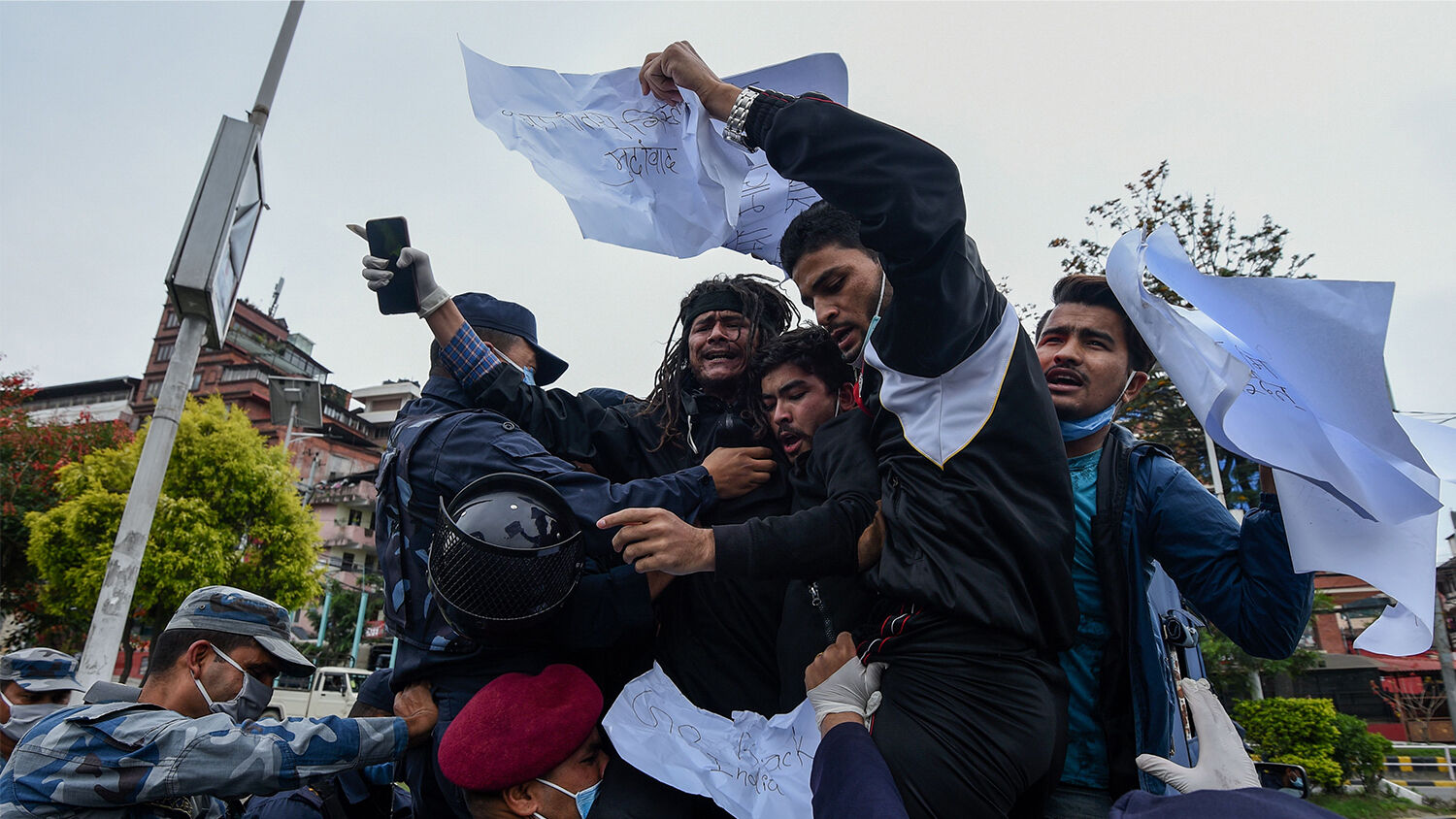 Police detain demonstrators at a May 10 protest in Kathmandu against India’s newly inaugurated link road to the Chinese border.
AFP/Getty Images

‘Space is the unsung achievement of Indian industry in many ways.’

Since the beginning of May, there have been clashes between Indian and Chinese forces at the Eastern Ladakh border, causing both nations to increase their border patrol forces in the area. Many believe these tensions will lead to a clash of nations. However, one source foretells that is not the case.

One by-product of these rising tensions is the continuation of defense programs, especially by India.

Looking to both jumpstart the economy in the wake of covid-19 and reform the defense sector, the Indian government decided to raise the foreign direct investment in the defense sector from 49 percent to 74 percent. Indian Finance Minister Nirmala Sitharaman said that the government will also create an import ban on certain weapons and platforms in a bid to boost indigenous production of defense products. This “Make in India” economic policy is now underway.

India is restructuring its fighter jet program with a $17 billion project, which will see 114 aircraft built in India with foreign technology but no foreign procurement. That means these jets, made exclusively in India, will be as advanced as any in the world.

The reforms placed the biggest emphasis on the space sector.

India has placed a high priority on the growth of its space domain as far as its security discourse is concerned. In the last two years alone, it has conducted anti-satellite tests, announced the preparations of a manned space mission to take place in 2022, and announced a new “space doctrine.”

After successfully conducting an anti-satellite test, India joined the United States, Russia and China as part of an exclusive club of nations with anti-satellite capabilities.

India’s already impressive space program has been exclusively led by the government. But now it is being opened up to the private sector to help propel it even further forward. Such a move is likely to see technological innovations thrive, as the new domain of space warfare is not regulated by binding legislation.

The Indian government is looking to engage with private entities in many military ventures in the interests of the “Make in India” policy, as the nation becomes more and more ambitious.

Many believe that this growing ambition is putting India on a collision course with China. While tensions are high at the Ladakh border, Bible prophecy foretells that China and India will actually become allies.

India’s growing ambition, military advancements and economy-centric focus are putting it on the path to be an important player in global events. The Bible prophesies that India will be a significant part of a 200 million-man military coalition (Revelation 9:16).

Ezekiel 38 gives specific details about this army, saying that it will include “Gog, the land of Magog, the chief prince of Meshech and Tubal … Persia, Ethiopia, and Libya … Gomer, and all his bands; the house of Togarmah” (verses 2, 5 and 6). In The Prophesied ‘Prince of Russia,’ Trumpet editor in chief Gerald Flurry explains the identities of these nations. He writes that this power bloc will be led by Russia, signified by Gog, Meshech and Tubal. He also explains that “Magog” is referring to China, as a major player in this bloc.

Of India, he writes (emphasis added):

Ethiopia and Libya should be translated “Cush” and “Phut.” Some of Cush and Phut migrated to African nations, but the rest settled in parts of India. The context of this passage shows that it refers to modern-day Indians (and perhaps Pakistanis) rather than Africans.

This truth makes it even more significant that the only nations other than the U.S. and India with a functioning space-defense program are Russia and China, India’s prophesied military allies.

India and China are seemingly at loggerheads right now. But the current hostilities are providing both countries, especially India, with strong impetus for further military development and advancement. Just last month, India ordered 24 MH-60R helicopters in a $900 million deal to help better police the Indian Ocean.

Such advanced weaponry will be pivotal when the prophesied Asian military alliance fully forms.

India and China have agreed to resolve the border dispute peacefully. While this does not mean the issue has been completely resolved, it does point toward the sure word of Bible prophecy: Rather than be enemies, these two nations are going to be powerful, military allies.

To fully understand why it is important to watch India and its coming role in the prophesied Asian army, request your free copy of Russia and China in Prophecy—and prove the Bible for yourself.