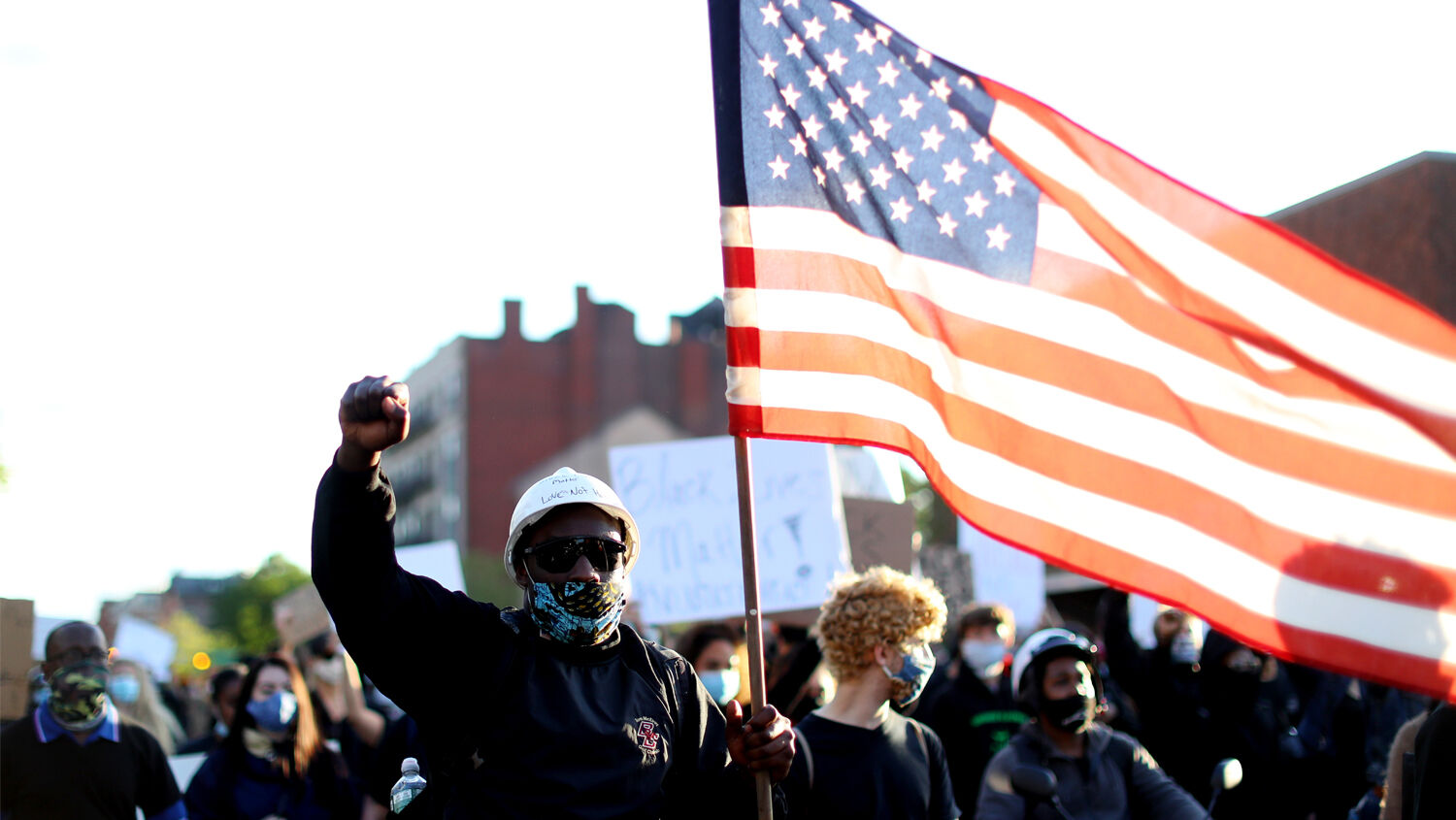 A protester waves a flag during a demonstration in response to the recent death of George Floyd.
Getty Images

When you love America, and you see it destroying itself, you want to prevent it if you can.

In 1984, a Russian intelligence agent who defected to the United States, Yuri Bezmenov, wrote a book, Love Letter to America. He really did love America, and he had the unique perspective of someone who knew how Communists were working to destroy it.

Today, 36 years later, as America burns with racial division and lawlessness, his warnings are achingly relevant.

This man, like so many millions of outsiders, chose to make America his home. “For what other reason have thousands risked their lives, gone to unimaginable troubles, left behind their families, their motherland and traditional ways of life to come to America? Have you ever heard of ‘illegal aliens’ risking their lives crossing the border at midnight into Socialist ussr? Or the ‘boat people’ swimming oceans and drowning by the thousands just to reach the shores of Communist China? Or defectors like me, leaving behind relative affluence and risking bullets in the back in order to join the ‘progressive workers paradise’ in Russia?” Bezmenov wrote. “No, we all come here to America, obviously willing to be ‘exploited by capitalists’ and enjoy ‘oppression’ together with you. Because we believe and know—America is a better place.”

That is something many Americans no longer believe. They really have come to see this as the most oppressive, most racist country in the world. They want to see it suffer and burn.

Bezmenov’s book exposes the Communist plan: Convince people who live in the world’s freest, most just, most affluent racially integrated country, with the greatest opportunity for people of all races and types and cultures—to believe the opposite. The method is “ideological subversion—the process of changing the perception of reality in the minds of millions of peoples.”

Does that sound familiar?

It doesn’t just match this afternoon’s latest headlines about riots. It matches an ancient prophecy in Isaiah 5:20-21. God knew we would call evil good and good evil—put darkness for light and light for darkness. Look at the news: Powerful people are calling obviously wicked looters and arsonists “just,” and they are calling efforts to stop the violence “unjust.”

“The art of duping the masses into doing things to their own disadvantage and making them believe it is ‘the will of people’ is as ancient as mankind itself,” Bezmenov wrote. “The essence of subversion is best expressed in the famous Marxist slogan (if you substitute ‘proletarians’ for a more appropriate word): ‘Useful idiots of the world—unite!’ To achieve the desired effect, the subverter must first make idiots out of normal people, and divide them, before turning the people into a homogenized mass of useful and united idiots.” Judging by recent events, we are in that final stage now: This nation has witnessed unprecedented mass idiocy, homogenized mob derangement.

Bezmenov lists the tactics, which include:

“The main principle of ideological subversion is turning a stronger force against itself,” Bezmenov wrote. “Just like in the Japanese martial arts: You do not stop the blow of a heavier more powerful enemy with an equally forceful blow. You may simply hurt your hand. Instead, you catch the striking fist with your hand and pull the enemy in the direction of his own blow until he crashes into a wall or any other heavy object in his way.”

He likens it to a building containing explosive materials. The enemy starts the fire next door and focuses on keeping the occupants of the building distracted, arguing and doing anything except noticing the approaching flames. “Smart people would notice the fire and remove the inflammable objects and material before the house catches the fire. Useful idiots will keep arguing about whether it is constitutional or not to pay firefighters, or the equality of husband and wife in domestic chores (who should remove the combustibles), until the actual explosion blows their enfeebled brains all over the neighborhood.” Americans are screaming at each other over relative non-issues while ignoring the flames engulfing our house!

Bezmenov describes the effectiveness of discrediting law enforcement, and of buying people off with socialist programs that make them loyal to the welfare state but not the nation. “[I]n the area of social life, by encouraging you to put your individual rights over your obligations (and obligations private, financial, moral, patriotic, etc) the subverter achieves the desired effect: a society composed of irresponsible individuals, each one ‘doing his own thing,’ and acting according to the ‘law of the jungle.’ Such subversion of society is the first step to tyranny.”

This book makes for chilling reading in light of today’s events. He even wrote, “Racial and ethnic interrelations is one of the most vulnerable areas for demoralization.” I encourage you to read it. It shows the danger in remaining ignorant of history, in eliminating religion and morality, in forsaking the ideals that founded this nation, in failing to build loyalty in our people, in turning education over to radicals, in embracing socialist thinking.

Though perhaps initiated and encouraged by kgb masterminds, these dangerous actions are all things Americans have done to ourselves.

“Why are people—especially in the United States and Britain—so blind? Why so naïve?” Herbert W. Armstrong wrote in a March 1969 Plain Truth article. “Why are our people unable to recognize the Communist line—the Communist plan and conspiracy—in college and university riots, in propaganda accusing ‘police brutality,’ in ‘black power,’ ‘black panther’ and other slogans, even in ‘civil disobedience’ and ‘non-violent’ movements of protest which lead to violence? …”

“The guiding hand in student revolt is the Communist Party,” he continued. “Many students, their emotions stirred and enraged to violence, do not themselves realize this. Yet, actually, these young leaders of the ‘new left’ movement are going beyond the Communist Party. Their plan is to stir up college-age students to revolt first, and the teen-age high school adolescents. If they can corrupt and/or win over tomorrow’s students they will gain control.”

There isn’t much concern over communism in America today. But there is little doubt that a significant number of “tomorrow’s students” have been corrupted and won over—and that Communist-aligned thinkers have gained a breathtaking level of control.

“O Israel, you have destroyed yourself,” God laments in Hosea 13:9. God loves America, too—and mourns to see what we are doing to ourselves!

“But in me is your help. I will be your king,” He continues—what a beautiful promise—which is then followed by a piercing question: “Where is ANY OTHER that may save you in all your cities?” (verses 9-10). Yes, how could anyone but God save us? Where is there any man to solve these problems? Do you really think the solution is written in a politician’s campaign speech notes, or in an e-mail from a billionaire ceo about “having a national conversation,” or on some celebrity’s shirt, or on a smashed liquor store in spray-paint?

Yet God is reaching out! He would help us, He would solve our problems, He would unite us—He would be our king—if only we would embrace His law and submit to His rule! God loves America. He wants to prevent our destruction if He can. But He will only do so if we allow Him to.