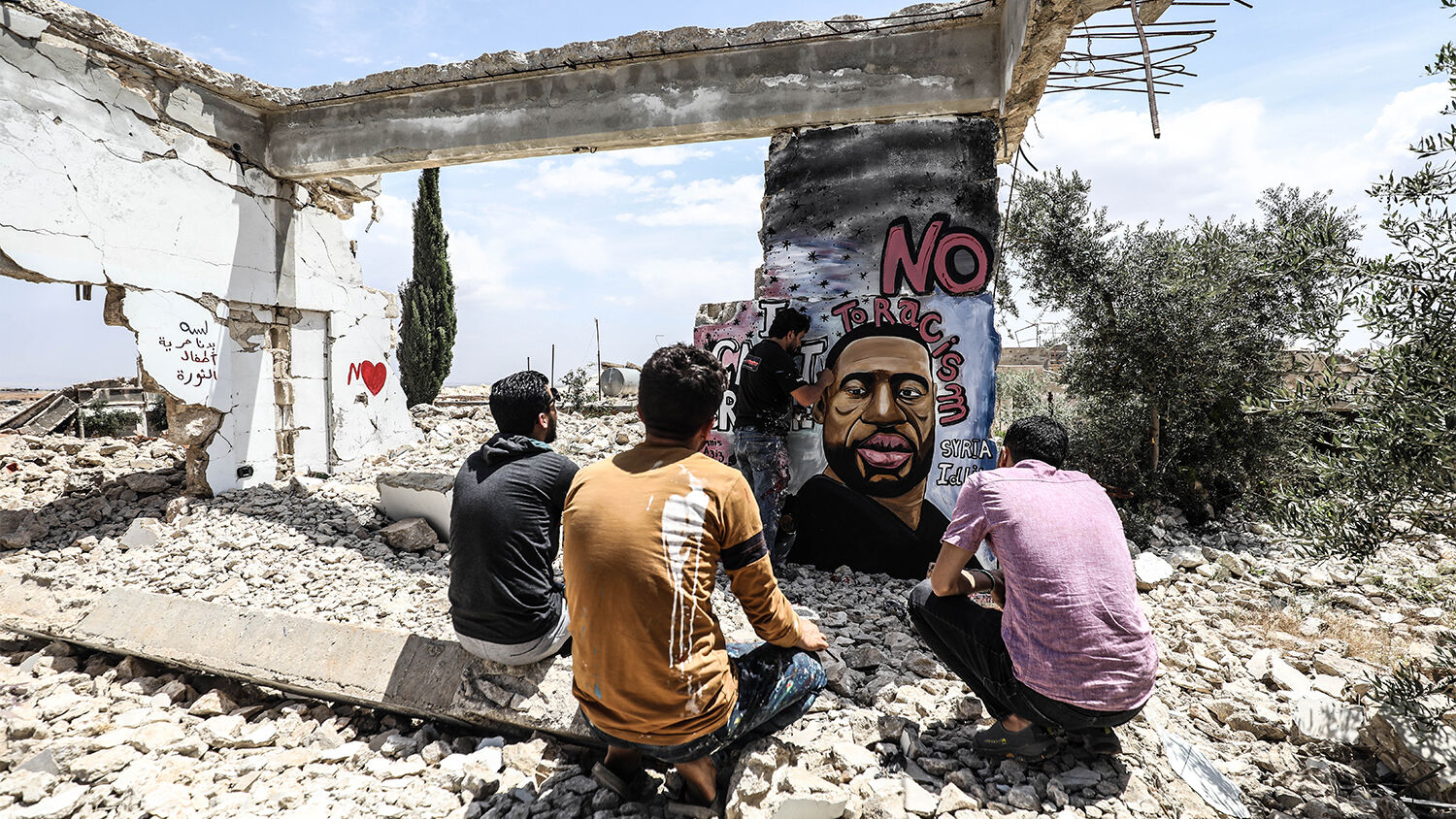 As the United States burns and bleeds, the nation’s enemies gloat. They see an opportunity to attack, and we are helping them do it.

Why the unprecedented paroxysm of outrage over an incident in Midwestern America?

Newspapers and media outlets worldwide are headlining the mayhem sweeping through America’s cities. Argentina’s largest newspaper: “Protests and Looting Throughout the U.S.” Mexico’s Diaro 24 Horas: “Anti-Racist Anger at the Gates of the White House.” Italy’s La Stampa: “Looting, Fighting and Curfew: the U.S. at War.” The West Australian: “U.S.A. at War With Itself.” Germany’s Bild: “This Killer-Cop Set America Ablaze.”

They are marveling at the grand, messy spectacle of America tearing itself apart. It is captivating entertainment—like an epic reality tv show of celebrity humiliation and self-destruction.

And who seems to be enjoying it most? Authoritarian governments like Iran and China—those America has criticized for trampling human rights, muzzling the press, blocking protests and stifling free speech. Suddenly these nations are posing as high-minded defenders of justice and freedom, castigating “oppressive” America.

Mohammed Javad Zarif, Iran’s foreign minister, tweeted: “Some don’t think #BlackLivesMatter. To those of us who do: it is long overdue for the entire world to wage war against racism. Time for a #WorldAgainstRacism.” Iranian Foreign Ministry spokesperson Abbas Mousavi published a rare English-language statement “to the American people,” saying Iran stands with them against “state oppression.” Does anyone feel like taking lessons from the Islamic Republic of Iran on how to combat state oppression?

When a U.S. State Department spokesperson tweeted criticism of Communist China’s crackdown on Hong Kong, a Chinese Foreign Ministry spokesperson tweeted back a three-word response: “I can’t breathe.” She then tweeted, “All lives matter. We stand firmly with our African friends. We strongly oppose all forms of racial discrimination and inflammatory expressions of racism and hatred.” This is awfully high-minded, coming from a nation that just expelled hundreds of African migrants into the streets of Guangzhou in April, the latest example of decades of racial hostility toward Africans in their country.

Turkish President Recep Tayyip Erdoğan bemoaned the “racist and fascist approach” of U.S. police and “the unjust order we stand against around the world.” This from a man who has used Turkey’s military to punish and purge dissenters and transform his nation from a parliamentary democracy into an authoritarian state.

Russia’s Foreign Ministry publicly spoke out against America’s history of “unjustified violence” by police and condemned officers for detaining Russian journalists. As Foreign Policy noted, this came just days after several Russian journalists were jailed for supporting an activist who was imprisoned after criticizing Russian law enforcement. The irony gets worse: How many journalists have been outright murdered in Russia since Vladimir Putin first came to power in 2000? About 150.

What does it tell you that the protesters on America’s streets, and their cheerleaders in media and the political class, are being encouraged and egged on by foreign totalitarian states?

Does Communist China really care about George Floyd? Does Islamist Iran have sincere concern about racism? Does dictatorial Russia actually care about freedom of the press?

No. They want to destroy America. And as America bleeds and burns, they see an opportunity.

The graffiti vandal in Berlin, the millionaire soccer player, the burka-wearing Iranian woman holding a candle, the Russian Embassy social media manager, the Iranian foreign minister, the president of Turkey, the New Zealand placard-waver, the screaming Canadian marcher. What in the world do they all have in common? You can read about the ultimate cause in the latest Trumpet cover story: “The Global Ambition to Destroy America and Its President.”

The real tragedy is, many people in America have the same goal. And in their effort to destroy this country, they are dragging a lot of terribly foolish people along with them.

As you watch Americans fighting other Americans, looting and burning American businesses, trashing American cities and neighborhoods, making despicable accusations about other Americans—you need to see just as clearly as the nation’s adversaries do that we are ruining ourselves.

We are inflicting upon ourselves a nation-killing wound.

A lot of the unrest in America today is being supported and organized by radical leftists who, whether gradually or suddenly, openly or secretly, want to destroy this country.

These individuals are deliberately stoking protests and mutating them into violent riots through coordinated command-and-control and supply chains of weapons and projectiles. Law enforcement officials and police intelligence units across the country say these efforts are “more organized, better coordinated and supplied than any militants seen in civil discord in years,” reported Christine Dolan and John Solomon for Just the News. They quoted U.S. Park Police Acting Chief Gregory T. Monahan as saying, “Intelligence had revealed calls for violence against the police, and officers found caches of glass bottles, baseball bats and metal poles hidden along the street.” “In other cities, stacks of bricks have been discovered in staging areas that end up being slammed against store windows by looters,” they wrote.

“What it seems like is organized anarchy,” former Ferguson, Missouri, police chief Tom Jackson told the John Solomon Reports podcast. “These folks seem to be well-coordinated and well-funded. … This has really evolved into a sort of an insurgency that is hiding behind protesters and people exercising their rights.”

Among the active supporters of these protests and riots is the Democratic Socialists of America. Its National Political Committee stated that Floyd’s death was a “public execution,” part of “the deeply entrenched pattern of violence, anti-blackness and oppression upheld by policing in this country.” It wrote: “This is white supremacy. … Racist police violence is not incidental to the capitalist system, it is necessary to maintain its operation.” This group works closely with Antifa groups, and some of its branches are raising funds for “George Floyd Uprisings Nationwide.”

Working for the Epoch Times, journalist Trevor Loudon has documented similar support coming from a whole range of Communist-aligned groups in America. The Party for Socialism and Liberation is referring to this chaos as an “absolutely critical period” for imposing its vision of a Communist revolution. It stated, “The police will always fulfill their role of being shock troops for white supremacy and capitalism as long as it exists in this racist state.” The Workers World Party, which supports China, Cuba, Iran, North Korea and Russia, is cheering on the protests. One of its members published an article on May 28 titled “Against Police Violence and Capitalism, to Rebel Is Justified,” describing “police terror” and scorning “disgusting bourgeois praise for nonviolence.” The Revolutionary Communist Party is using the death of George Floyd to call for “a movement for an actual revolution.”

There are other small Communist groups such as Communist Party USA, Liberation Road, Socialist Alternative, and Socialist Unity Party. Together with the 66,000 Democratic Socialists of America and their allies in Black Lives Matter and Antifa, they can mobilize tens of thousands of people on short notice to splash gasoline on any spark of societal friction.

Radical socialists are also getting ample help from the press. Hollywood celebrities are paying rioters’ bail money. Big corporations have fallen all over each other to make statements and release ads trying to align their brands and business practices with the protesters and rioters. A Nike ad said, “For Once, Don’t Do It”—“Don’t turn your back on racism. Don’t accept innocent lives being taken from us.” Nikelodeon broadcast a black screen with “I can’t breathe” for 9 minutes. Netflix tweeted a sentiment similar to many protest placards: “To be silent is to be complicit. Black lives matter.” YouTube is donating $1 million for police reform. Intel is donating $1 million, and Verizon $10 million, to “social justice” organizations.

These mainstream voices have made explicit accusations of “systemic racism,” “white supremacy,” the genocide of blackness and the violence of whiteness. They’re saying that the looting and burning and violence is understandable—even right and just. They are cheering the violence.

By doing so, whether knowingly or in ignorance, they are aligning themselves with America’s worst enemies.

Consider this assessment from UnHerd’s Aris Roussinos: “Covid Has Exposed America as a Failed State.” He wrote: “The idea [America] can be considered a viable model of governance to follow is now patently absurd. As I sit typing this, troops are deployed on the streets of cities across the country … as looters smash and burn and ransack shops, and protesters march against rubber bullets and tear gas; the tools of imperial policing are now brought to bear on the metropole. It is surely impossible to view the U.S. at this point as anything other than a cautionary tale, a burning city on a hill, which evokes only the desire for our own society to avoid its fate.”

Can anyone argue? Countries the world over do see America as “a cautionary tale.”

God warned that if the descendants of the ancient Israelites, which include America, did not believe and obey Him, “[T]hou shalt become an astonishment, a proverb, and a byword, among all nations …” (Deuteronomy 28:37; see also 1 Kings 9:7; 2 Chronicles 7:20; Psalm 44:14).

You are witnessing the death of a great nation. And what will the world become when its “last best hope” for human freedom burns itself within and gets destroyed from without? The prophecies of the Bible address that too. It will be horrific for the Americans and then for the whole world. Read The United States and Britain in Prophecy.

If you are tired of looking at photos and videos of your country dying, I suggest you click over to read The Wonderful World Tomorrow—What It Will Be Like. Even as the nation you love dies and its enemies salivate, you can have hope.