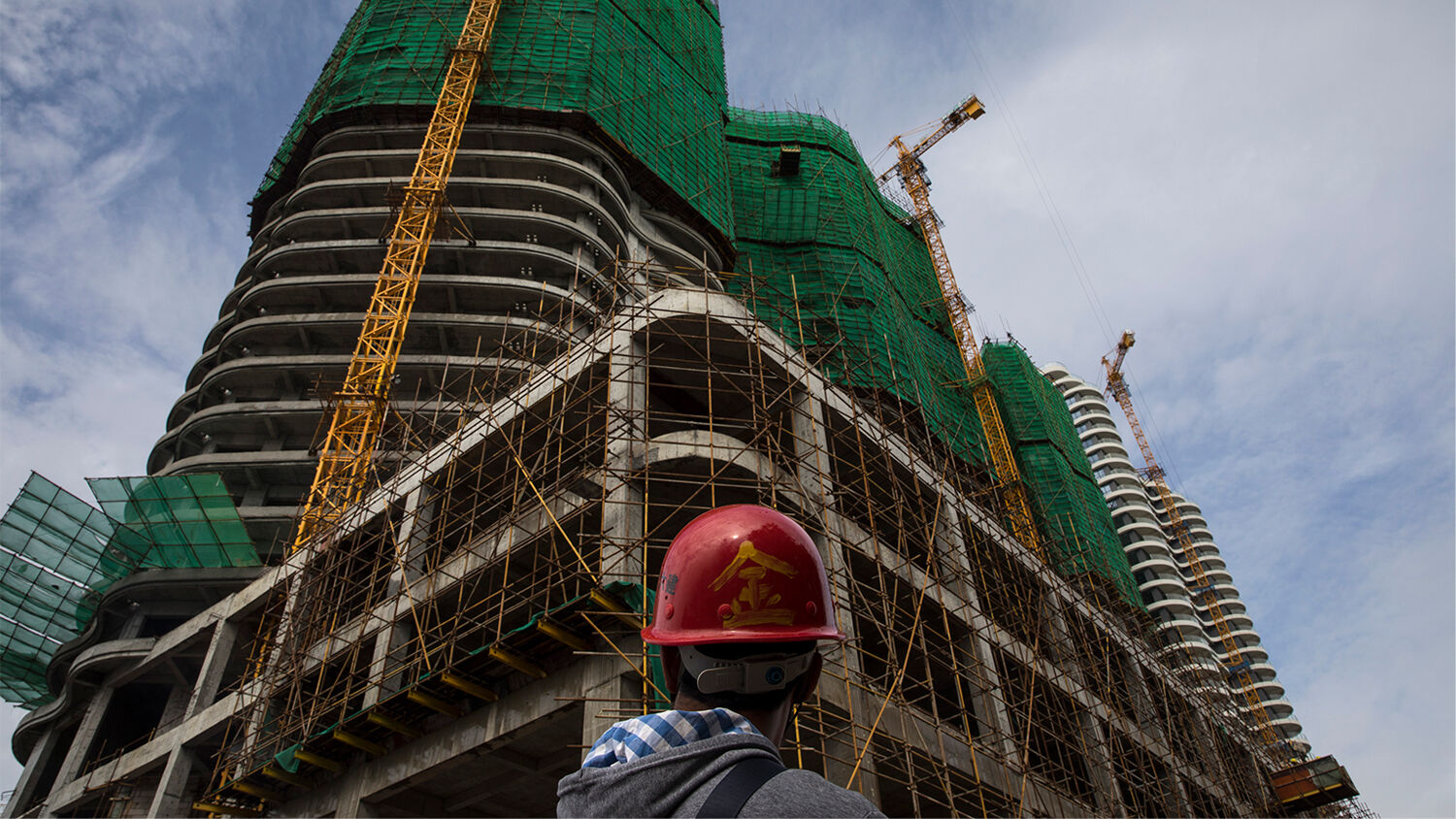 The Blue Bay beach resort area in Cambodia includes a 38-floor building that will house a 5-star hotel and luxury apartments.
Getty Images

Under the guise of building casinos, China has made a winning bet for control of the South China Sea.

China is making rapid progress on construction of a port, large airfield and accommodations in Cambodia as part of its Belt and Road Initiative, reported the Lowy Institute on May 27. All evidence indicates that this will be a military installation.

China has gradually become involved in Cambodia, starting as early as 2013. In 2015, its emerging belt and road strategy provided the pretext for greatly increased involvement in neighboring countries.

Now, more than ever, Cambodia is looking like “another pearl in China’s string.”

A 99-year land lease, which the Center for Advanced Defense Studies says is illegal under Cambodian law, paved the way for China to start development in this little-known strategic region.

China heavily funds Cambodian infrastructure, especially around the city of Sihanoukville. This relatively unknown city is infamous for its high concentration of Chinese-built casinos and soaring crime rate. It is the hub of the Sihanoukville Special Economic Zone, an area where China is constructing industrial, commercial and residential buildings. The zone aims to encompass 300 businesses and employ 80,000 to 100,000 workers. For the small city of Sihanoukville, this is a major investment.

All this goes beyond the economy. Chinese infrastructure is often dual-use, suitable for civilian activities but able to rapidly expand for military needs.

Cambodia granted China the use of Ream Naval Base, its main naval facility, in the summer of 2019. Since then, China has continued work on what it claims is a resort intended to stimulate the economy by attracting tourists from around the world to visit the obscure island of Koh Rong. However, there are several indications that this resort is only a means to a more strategic end. According to a December 2019 article from the New York Times, armed officials from the Cambodian Ministry of Land Management told a fisherman to leave his home in one of the country’s national parks. The reason? “A military port built by the Chinese” would soon be constructed there. The resort will likely be a dual-use building, accommodating traveling Chinese military personnel.

Also under construction is an airfield with spaces too small for passenger jets but an ideal size for fighters, reported Belt and Road News on February 9. Its runway is also longer than the one at Phnom Penh International Airport, possibly indicating a planned expansion to host transport aircraft. “There is no significant nearby population or industrial center. And its enormous scale goes far beyond the needs of the languishing Koh Kong resort nearby,” wrote Belt and Road News.

These bases around Sihanoukville, guarding the Western approach to the South China Sea, will put Chinese warships and aircraft in easy reach of the Sunda Strait choke point near Jakarta and seal off the Strait of Malacca toward the west. This allows for control over trade and defending the mainland against foreign navies.

Malacca is one of the world’s most important trade choke points. According to a 2011 United Nations report, nearly half of the world’s annual seaborne trade passed through the straits of Malacca, Sunda or Lombok in 2010. In 2016, more than 90 percent of crude oil that transited the South China Sea also passed through the Strait of Malacca. China receives 90 percent of its crude shipments through the South China Sea. South Korea and Japan also rely on this route for their oil.

This “pearl” on China’s string of Belt and Road destinations is more than an economic asset or a small outpost; it allows China to project air and sea power from an unchallenged strategic location.

Cambodia offers a clear picture of how China, under the guise of the Belt and Road Initiative, is growing in military might.

Its growing militarization is a trend to watch. It is exactly what the Trumpet warned about long before China’s aggressive domination of the region began making headlines in 2016.

The Trumpet monitors events in the context of Bible prophecy. China is one of the most important nations of the 21st century, so if the Bible is relevant for our day, it must say something about this rising military and economic superpower.

Thousands of years prior to China’s rise, prophecies in the Bible were recorded for our day, showing that China will become part of “the kings of the east” alliance (Revelation 16:12).

This will be an alliance of Asian nations, including Russia, India, Japan and likely some of the smaller Asian nations falling under China’s influence (see also Ezekiel 27). They will field an army of 200 million soldiers (Revelation 9:16). Our free booklet Russia and China in Prophecy explains the biblical identities of the nations in this alliance.

For these prophecies to be fulfilled, China has to militarize. This seemed impossible when our predecessor magazine under Herbert W. Armstrong, the Plain Truth, wrote about it decades ago. But today, as the Bible predicted, it is reality.

China’s Belt and Road Initiative is meant for military purposes, and it will ultimately draw closer to Europe—a relationship that is growing stronger amid the coronavirus crisis. The Bible shows that these “kings of the east” will help Europe besiege the United States economically. Mr. Flurry wrote, “Should Europe, the resurrected Holy Roman Empire, find a way to take advantage—even for a moment—of key resources and strategic holdings of China, Russia and Japan, it would have more than enough power to besiege the Anglo-Saxon nations ….”

About four years ago, I wrote an article in the Trumpet magazine about China, and the title of it was “China Is Steering the World Toward War.” … I explained in that article [that] for seven decades the United States has had naval dominance in East Asia and the South China Sea, and now there’s a total change. China is domineering and bullying East Asia and bullying them into submission.

He went on to explain how China could stop anyone from using that sea route if hostilities increased. Increasing Chinese military power and control over trade will make possible the fulfillment of this prophesied siege against the U.S.

When this is fulfilled, it will transform the world’s balance of power. What will the future of the U.S. and China look like? Watch Mr. Flurry’s Key of David episode “The China-America Clash Is Prophesied” for more information.