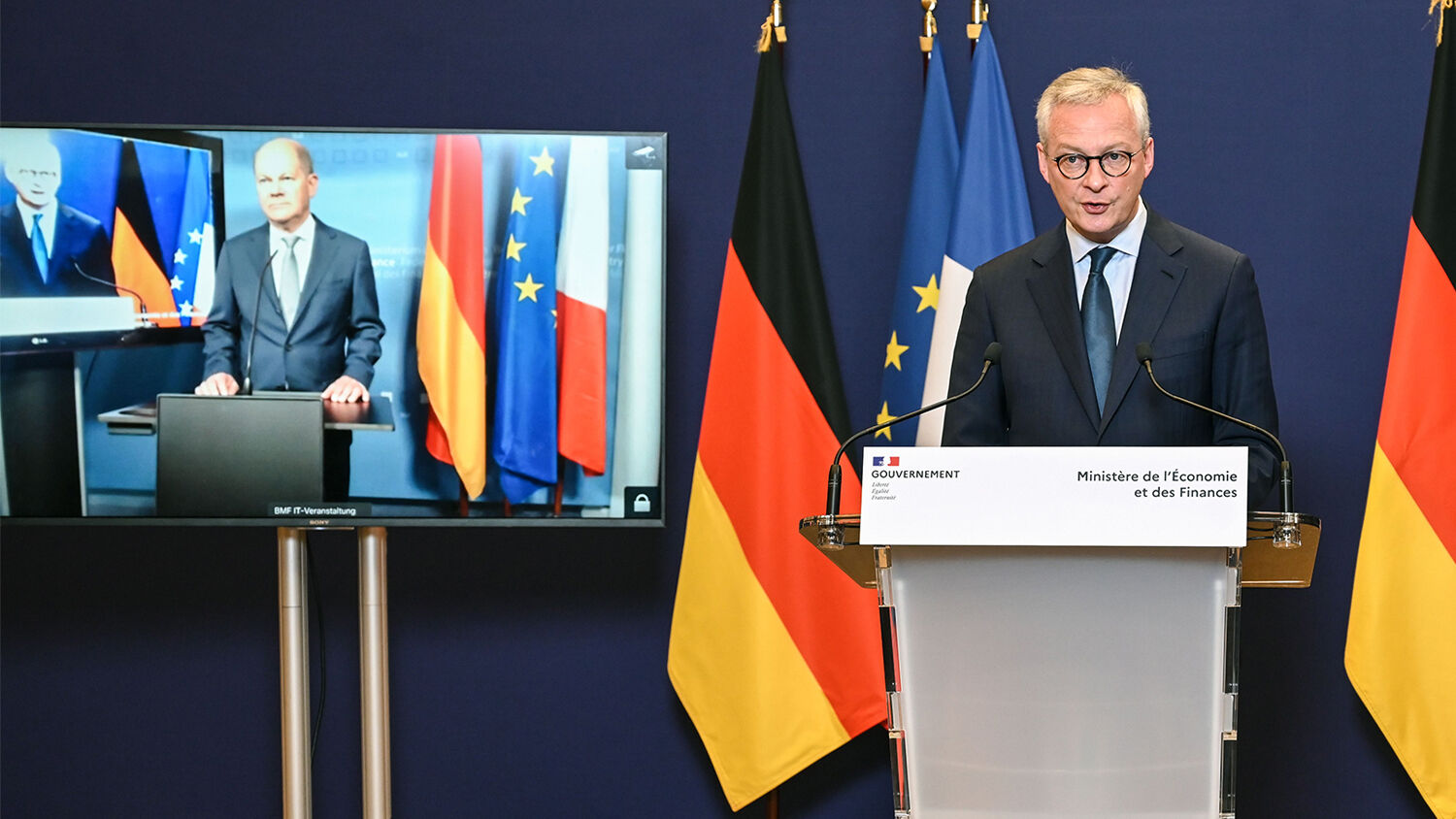 French Economy and Finance Minister Bruno Le Maire addresses a joint press conference with his German counterpart Olaf Scholz, via video link, on the European recovery plan proposed by France and Germany, at the Economy Ministry in Paris, on May 19.
AFP/Getty Images

Germany and France proposed on May 18 a €500 billion (us$549 billion) recovery fund to help the eurozone cope with coronavirus. It would be taken from debt issued by the European Commission and comes on top of the €540 billion agreed to in April.

If the deal succeeds as proposed, it would be a major step forward for integration. Even if it doesn’t, it shows that Germany is more willing than ever to take the lead on the economy.

The proposal would see the European Union borrow the money on financial markets. The money would then be given to countries and businesses in need. This money would come as grants, not loans—a significant departure for the EU. All member states, rich and poor alike, would then be expected to cover the expenses through the EU budget. Paying back this loan is estimated to take until 2060.

Richer, more frugal northern nations will have to pay for poorer, debt-ridden southern countries. This deal heightens the existing contentions and prejudices; since 2008, many richer northern European nations came to view their struggling neighbors in the south as lazy and irresponsible.

Before the fund passes, all 27 member states must approve it. So far, that hasn’t happened. The final result is still unknown; the Netherlands, Austria, Sweden and Denmark are currently working on a counterproposal. Germany and France may fight to save the deal, or may allow it to be watered down. Even if it goes into force, the money will not arrive for another year.

Despite this, the new fund marks an important change for the eurozone.

To this point, Germany has rejected using EU-wide financial resources to help member states. It recently made headlines for refusing to issue “euro bonds,” also known as “corona bonds,” which would have funded the recovery by combining debt securities from various EU members. But this was unpopular with taxpayers in the north because it would burden them in order to help less frugal nations.

By taking the lead on an EU-wide recovery fund, Germany is changing this position. This is the first time it has backed some kind of pooled debt for the eurozone—a major step toward a superstate.

“Germany and France have suddenly decided they want to lead the way,” wrote Bloomberg. It said that a successful deal “could be the seed for a larger EU budget, based not just on individual contributions from member states but also on new EU-wide taxes. If that happened, the eurozone would move somewhat closer to a ‘fiscal union,’ which is needed to put it on a more solid footing.”

CapX also observed this trend, stating, “Seasoned Brussels observers will be shocked to learn that [EU] proposals have very little to do with the pandemic and everything to do with deepening the centralization of EU power and top-down policymaking.”

A “fiscal union” has long been seen as the moment when the eurozone shifts from being a collection of nations to a superstate. Shared debt and shared taxes mean all the elements of a shared government will have to be put in place. Germany has refused to go this far. It doesn’t want to allow other countries access to German tax dollars unless it can control how they are spent. Otherwise, that money could be wasted, or bad financial decisions from other countries could put German livelihoods at risk.

The fund is limited, and many are saying it is not enough. There is no blanket provision for ongoing borrowing. Those further steps won’t come until Germany has more control over the eurozone’s economy. But this is still a historic step.

If this deal goes through, it will give the EU a new level of authority and integration.

German Chancellor Angela Merkel is keen to preserve the euro because she sees it as a means of enlargement and further integration, according to Jean Quatremer, writing for French publication Libération. Merkel stated that it is necessary to “act responsibly and in an intelligent manner so that the euro can survive.” The single currency “must survive,” she said, “in order to make integration progress.”

However the deal takes shape, European integration will continue—much of it thanks to coronavirus.

“Will the coronavirus usher in the deadly Holy Roman Empire?” asked Trumpet editor in chief Gerald Flurry in a recent Key of David program. He stated that the economic problems Europe is facing due to the virus will greatly hasten the formation of a modern-day united Europe with greater power. He warned that the formation of such an empire would “affect your life directly.” He stated that “more and more people are talking in Europe about the strongman that’s needed, that there’s a lack of leadership to really deal with the virus problem and the economic problems.”

To most, this sounds unlikely. Europe appears to be fracturing: displaying a lack of cooperation between member states for medical aid, having a German court challenge EU law, and failing to agree on any stimulus beyond a hollow shell of a deal.

But Europe will take advantage of these crises to unite.

“At first, the European Union’s response to the covid-19 crisis was worryingly slow and incoherent,” wrote CapX. “Since then though, ‘never let a good crisis go to waste’ seems to have become the mantra of both the European Commission and a number of national leaders.”

Coronavirus will not only justify riskier fiscal policy, it will also transform politics.

The Bible says a European superpower under German leadership will appear shortly before Jesus Christ returns. Daniel 8:23 describes the strong leader at the helm of this resurrected Holy Roman Empire as “a king of fierce countenance.” Mr. Flurry explains this prophecy in detail in his free booklet A Strong German Leader Is Imminent. “This soon-coming ruler could literally be called a king. Even if he is not, the Bible gives him that label,” he writes. “When the Bible talks about a king, in most cases it’s saying that this is not a democratic government. Even if he doesn’t have that title, he is going to lead like a king. This vision in Daniel shows that the European empire is about to become a lot more authoritative.”

The Trumpet watches this trend as did its predecessor, the Plain Truth, under Herbert W. Armstrong. He wrote in 1978 that European nations would soon “give all their military and monetary power to the central ruler over the ten—the coming European leader” (co-worker letter, Aug. 14, 1978). The Franco-German recovery fund could help Europe move in that direction.

In the end, this recovery fund won’t be enough to save Europe from an even greater crisis looming ahead. Mr. Armstrong warned that an economic crash in America “could suddenly result in triggering European nations to unite as a new world power larger than either the Soviet Union or the U.S. That, in turn, could bring on the Great Tribulation suddenly” (co-worker letter, July 22, 1984).

The coronavirus is hastening this prophesied unification of Europe. Watch Mr. Flurry’s Key of David program “Coronavirus and the Holy Roman Empire” to learn how this emerging power in Europe will affect you.