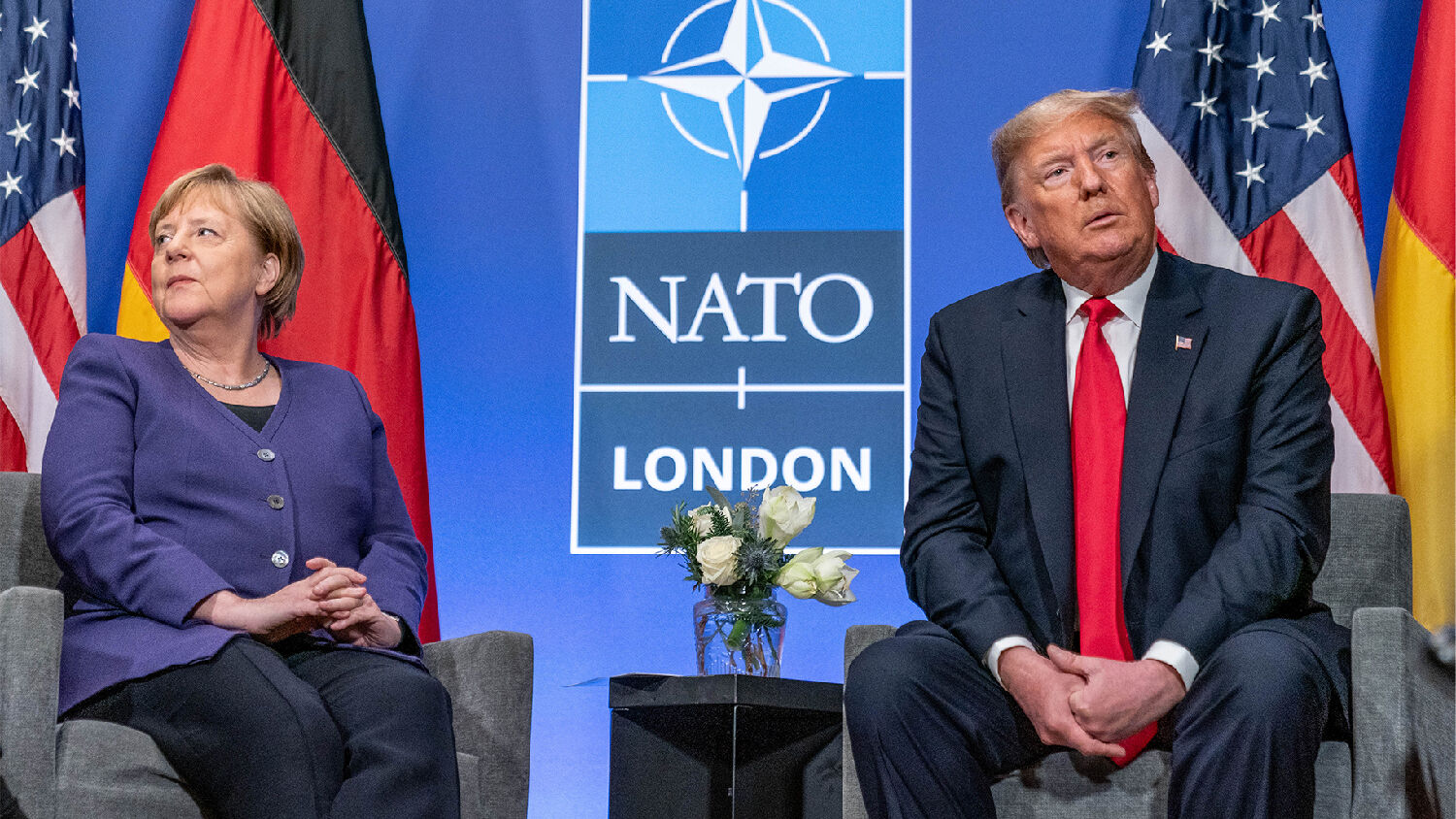 U.S. President Donald Trump sits next to German Chancellor Angela Merkel at the beginning of a bilateral discussion after the working session of the NATO summit.
Michael Kappeler/picture alliance via Getty Images

Germany’s view on the U.S. and China shifts, as was prophesied more than 2,700 years ago.

During the coronavirus pandemic, the already deteriorating reputation of the United States in Germany has suffered significantly. In a survey conducted by the Kantar Public polling institute on behalf of the Körber Foundation, 73 percent said they have a worse opinion of the U.S. today than before the crisis. Only 5 percent claim that their image of the U.S. has improved. This is a significant and dramatic shift.

“Germans’ skepticism toward the United States is growing—a worrying trend that should make decision-makers on both sides of the Atlantic think,” said Nora Müller, Head of International Policy at the Körber Foundation (Trumpet translation throughout).

But most Americans are not even thinking twice about this shift in Germany’s worldview. A survey conducted by the Pew Research Center and Germany’s Körber-Stiftung in April found that the American view has changed little over the past year. Forty-three percent of American respondents said that the relationship with Germany was more important than that with China, an increase of 2 percentage points.

“The coronavirus causing such mayhem around the world has mercifully left much of Germany relatively unscathed compared to the rest of Europe,” the South China Morning Post noted, “but the pandemic has nevertheless caused serious damage to the Continent’s leading nation in one vulnerable spot: its historically close ties to the United States.”

This trend is most significant, not only from a historical standpoint but also in light of what it means for the future. China and the U.S. are in a competition for the world’s superpower status. The nation with Germany at its side has a great advantage in that contest. “A pivotal nation in Europe between the United States and China, Germany is the world’s fourth-largest industrial nation with rapidly expanding commercial trade with China,” the South China Morning Post reported.

“The image of the United States has worsened dramatically in recent months—not just in Germany, but across Europe,” Thomas Jaeger, a political scientist at Cologne University, told South China Morning Post. “People are completely shocked by the way the United States has mishandled the crisis. They just can’t believe what they’re seeing. The one nation they thought they could always rely on for leadership and help isn’t even able to help itself. It’s a pitiful sight.”

By merely looking at the chronology of events, one would have expected a quite different result from the survey. The coronavirus originated in China. The government’s mishandling of the crisis caused it to spread globally, without warning. It even spread misinformation about the virus that caused countries around the world to panic. Some evidence also points to the novel coronavirus disease coming from a Chinese laboratory.

Germany’s media has regularly criticized China’s action. In “Did China Shamelessly Take Advantage of Our Good Faith?” Bild.de wrote on May 4: “Beijing is said to have deliberately hushed the outbreak of the potentially life-threatening plague in order to buy up the required medical needs on the international markets!”

“China has to clean up. Whether it comes to infection numbers, the origin of the virus, or the hoarding of protective equipment: Doubts about the information from Beijing are growing everywhere,” said foreign expert Alexander Graf Lambsdorff of the Free Democrats.

There are legitimate concerns that China’s crisis management and propaganda have made the economic consequences of the pandemic far worse, even costing lives.

“In China, the pandemic started with a cover-up,” Faz.net wrote on March 24 in “China’s Vicious Irony,” “but President Xi presents himself as a crisis manager. In the worldwide fight against the virus, his country could become a global regulatory power.”

The coronavirus crisis has dramatically changed the world as we know it. “The United States has been the most important partner for Germany and Europe for so long,” Jaeger said. “We’re seeing a dramatic acceleration of the trend away from that. … The world can be so unfair at times. No one really believes China’s covid-19 data, but it nevertheless seems like they succeeded in containing it. Their government’s policies were effective, and they were quick to help Europe. They were especially good at spreading propaganda about that.”

Germans were quick to believe any positive news coming from China, and quick to dismiss any negative reporting. The reverse was true when it came to the U.S.

“There have been some surprising outbursts of anti-American sentiment from elected officials in Germany in recent weeks,” the South China Morning Post wrote. “The mayor of Berlin and his interior minister recently caustically criticized the United States, prematurely blaming the United States for commandeering a planeload of face masks that never mysteriously disappeared.”

Indication is that many in Germany have been waiting for an opportunity to cause a rift in relations with the U.S. Germany has its own ambitions of becoming the world’s next superpower. But under U.S. dominance, this dream will never come to fruition.

The U.S. leads the North Atlantic Treaty Organization and holds the global reserve currency. Allied with the U.S., Germany will only be able to play second fiddle. But by allying with China, Germany has a chance of challenging America’s superpower status.

On April 9, 2019, China and the European Union issued a joint statement on common concerns on the strategic level and issues concerning bilateral trade and investments. German newspaper Der Tagesspiegel wrote in “United Against the U.S. Wrecking Ball”: “If the result of a global shift of interests between the two sides is already surprising, a second aspect seems to be a downright radical change. Such an agreement would be virtually ruled out today between the traditional partners of the U.S.A. and Europe.”

The rift between Germany and the U.S. already began taking shape even before Donald Trump’s presidency and the outbreak of the coronavirus. But recent events have greatly accelerated these trends. Europe, led by Germany, is heading into close cooperation with China. European officials seem willing to overlook any discrepancies to make this partnership work. The recent crisis may bring its unique challenges to this cooperation, but the Bible reveals that the two will soon form a trade relationship.

Isaiah 23 prophesies of an alliance between Germany and China that excludes the U.S. Just a few years ago, such an alliance would have been unthinkable. Even though relations may cool for a short time, their shared animosity toward the U.S. will ultimately drive them together.

In Isaiah’s End-Time Vision, Trumpet editor in Chief Gerald Flurry explains that the Bible prophesies of “a brief alliance between the German-led [Europe] and certain Asian powers … possessing the key resources and strategic holdings of China.”

Isaiah 23 speaks of a “mart of nations” that includes Chittim (China), Tarshish (Japan) and Tyre (German-led Europe). Germany has one of the largest merchant fleets in the world; together with China’s growing economic dominance, the two powers are bound to dominate world trade. The Bible reveals this will be to the determinant of the U.S. Mr. Flurry writes:

With a German-led Europe (the king of the north) possessing great maritime power, North America will be surrounded on the east by Europe and the south by Latin America. The Bible contains many prophecies of that European power attacking America—and many other prophecies of America being besieged.

That is where China and the giants of Asia enter the picture. When the Holy Roman Empire attacks North America, there will be no help or sympathy from Asia. In fact, considering that China has come to possess most of the world’s strategic sea gates (which, ironically, at one time were held by Britain and America), we believe there may be a brief alliance between the German-led Holy Roman Empire and certain Asian powers (Russia, China, Japan—the kings of the east). Should Europe, the resurrected Holy Roman Empire, find a way to take advantage—even for a moment—of key resources and strategic holdings of China, Russia and Japan, it would have more than enough power to besiege the Anglo-Saxon nations and enslave them.

Considering Germany’s decades-long ties to the U.S., this prophecy seemed almost unfathomable at the time it was written in 1994. The mere fact that we are seeing hostilities toward the U.S. grow, while China rises in Germany’s favor, should cause us to heed the warning that these prophecies contain. To learn more about fulfilled Bible prophecy, request free copies of our booklets He Was Right and The Proof of the Bible. These prophecies also contain the wonderful outcome that will follow today’s dark news. To get the full picture, please request Isaiah’s End-Time Vision.