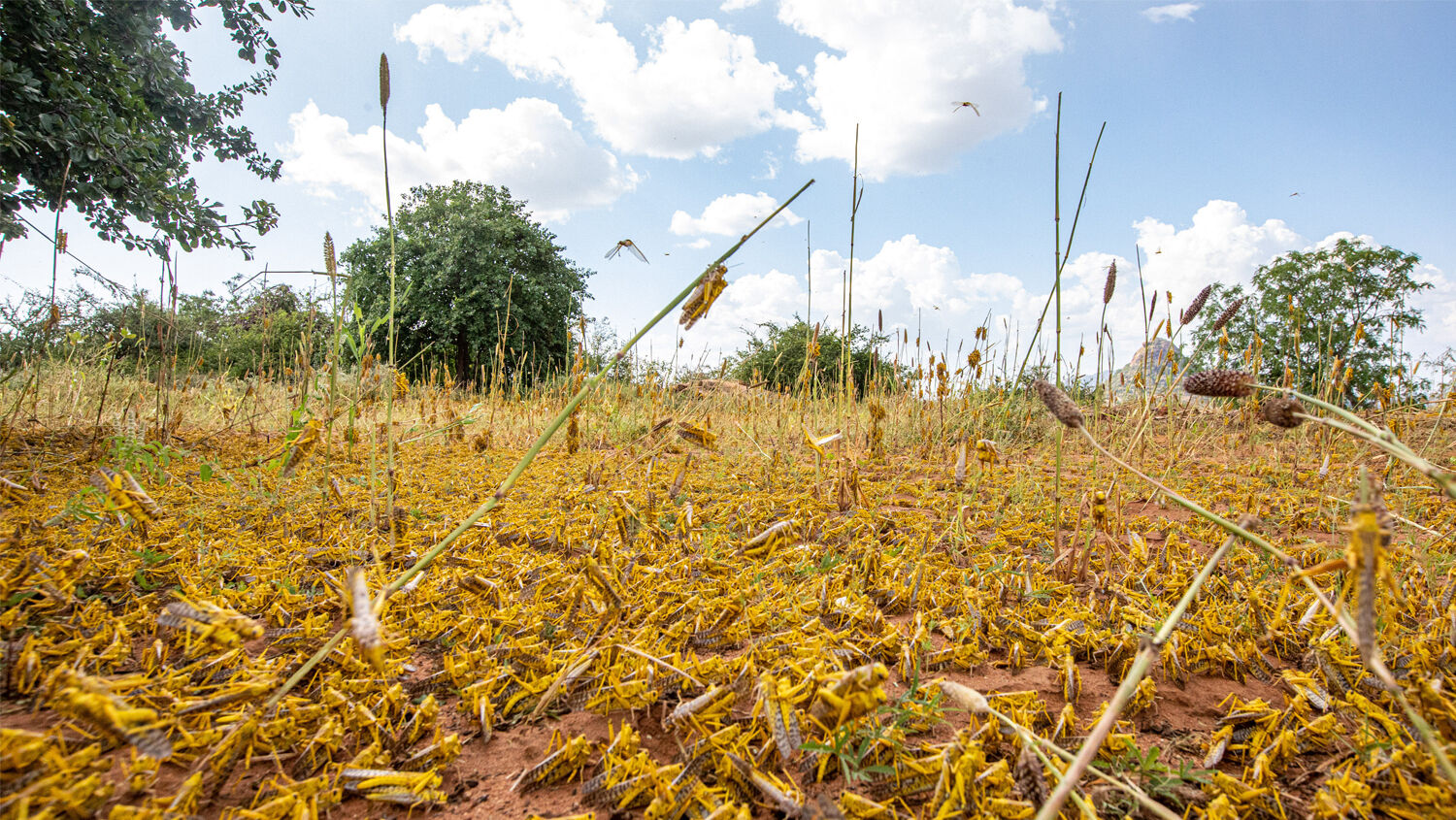 These insects not only harm farmers, they also bring down politicians.

Compared to coronavirus and the oil crash, the recent surge in locust swarms has received little attention. But it could easily prove transformative for Africa and, eventually, the world.

Kenya is experiencing its worst wave of locusts in 70 years, reported the United Nations Food and Agriculture Association (fao) on January 20. Ethiopia and Somalia are also severely affected. The continent is experiencing what the fao calls an “upsurge.” This denotes a crisis one level below what the UN would officially label as a plague.

The UN classifies the locust situation in Somalia, Ethiopia and Kenya as “dangerous,” its highest threat level. The outbreak will also be dangerous in a geopolitical sense. If the crisis continues, it could add to the troubles already plaguing Africa, and terrorist groups could exploit people’s anger and frustration to grow their influence.

The outbreak is now spreading across East Africa and threatens to move west and overwhelm the Sahel. Eventually, North Africa could be infested. What began last year as a relatively controlled outbreak is rapidly becoming a threat to Africa’s political stability.

How harmful can locusts be? One adult can eat the equivalent of its own body weight in vegetation each day. Swarms can grow to the size of New York City, and some are now as big as London. They can ruin 300 million pounds of crops in a single day. The fao estimates that a “modest” gathering amounts to roughly 40 million locusts, but they have been known to travel in swarms of 70 million. In one day, a swarm can eat the same volume of vegetables as 35,000 average humans.

Initially, farmers had hoped that the outbreak would decrease in the summer when drier weather arrived. So far, that hasn’t happened. “Recently, conditions for procreation and migration have been not just favorable—but ideal,” wrote National Geographic. Desert locusts are able to multiply by a factor of 20 every three months.

The timing of this infestation is also noteworthy. Whereas last year’s outbreak came after most crops were harvested, this year’s has come at the worst possible time—the primary growing season starts in mid-March. “When [locusts] feed on the germinating leaves, the crop cannot grow,” Anastasia Mbatia, the technical manager at an African agricultural charity, told National Geographic. “Farmers would need to sow seeds again.” For many, it may already be too late.

The fao estimates that as many as 25 million East Africans will suffer from food shortages later this year. Roughly 13 million people in Ethiopia, Kenya, Somalia, Djibouti and Eritrea already suffer from severe food insecurity, and in some places, food may already have run out.

Almost 70 percent of East Africans work in agriculture, and 48 percent of all Africans rely on it to earn a living, according to the United Nations. Half of all those entering the African workforce turn to agriculture. This is unusual in a world where most countries are shifting toward urban life.

Many are now seeing their livelihoods eaten before their eyes. This will bring social and political instability to many African nations.

Kelvin Dalrymple, vice president of Moody’s Corp., told cnbc, “Rising food prices from a prolonged shortage of key crops fuels the potential for social unrest across East Africa, a region where we already assess political risks as elevated and the ingredients for potential social unrest prevalent.”

Somalia has battled Islamic extremism for decades. More recently, the main threat has been al-Shabaab. In 2017, this group was responsible for killing 500 people in one bombing in central Mogadishu. The country has suffered civil war between rival Islamic groups since 1991. From then until 2010, Somalia saw 14 different administrations, with continual fighting between rival armed factions. Though some stability has been restored by outside military help, al-Shabaab still controls large areas of the country.

Ethiopia shares a thousand-mile-long border with Somalia and is also heavily affected by locusts. Currently, around half the country is a breeding ground for the insects. Swarms have been reported throughout the east and south, and some are migrating north.

Breeding is forecast to continue beyond mid-June and spread beyond the country. The UN warns that by early-to-mid-June large parts of the Sahel could be infested. These countries are already destabilized by rising terrorism.

The last thing Ethiopia needs is more instability. Terrorists from Somalia often cross the border to carry out attacks. The country is divided by 80 separate and sometimes hostile ethnic groups in nine different regions. These regions are partly independent and often clash with the government over political issues. A food shortage and loss of profit on crops could give radical Islamic groups an opening to gain followers and topple the moderate government.

So far, 2020 has been a year of instability in Africa. Not yet halfway through the year, the continent has suffered from increasing terrorism in the Sahel, the spread of coronavirus, a sharp decline in oil revenues, and now destruction of sorely needed crops.

All of this hastens the fulfillment of a forecast the Trumpet has been making for years.

In the April 2011 Trumpet, editor in chief Gerald Flurry wrote about the Bible’s forecast that the predominantly Christian country of Ethiopia would one day experience a dramatic shift and align with radical Islam. That seemed impossible at the time; some readers from that country expressed doubt that such a transformation could ever occur.

However, events have since proved this forecast correct. “Ethiopia does have the advantage of an effective and tough security apparatus that can probably counter any challenge posed by a Muslim splinter group,” wrote author and Horn of Africa expert David Shinn in 2014. “Broad disaffection in Ethiopia’s large Muslim community is, however, another matter.”

Ethiopia has seen increasing tensions between its Christian and Muslim populations. Churches and mosques have both been attacked with increasing frequency, and with deaths on both sides. If discontent among the Muslim minority is harnessed, it could transform the country.

How was Mr. Flurry able to make such direct and prescient statements before these trends were apparent?

The Bible prophesies food shortages and famines in the time leading up to Jesus Christ’s return. It also has a lot to say about large swathes of Africa falling to forces of radical Islam.

Mr. Flurry explains in his free booklet The King of the South that this power is radical Islam led by Iran. Why the clash? Because the forces of terrorism “push” against another power, “the king of the north,” which our booklet proves to be a German-led Europe. This provokes a whirlwind response.

This prophecy says that “the Libyans and the Ethiopians shall be at his steps,” or conquered by the king of the north (verse 43).

The countries Europe is prophesied to target in its whirlwind response must first fall into the hands of radical Islam. Neighboring countries such as Somalia, which already have problems with terrorism, may also be included.

Locust plagues may seem like a problem far removed from the average North American or European, but these crop-ravaging insects point to a Bible prophecy that is nearing fulfillment.

When this clash happens, it will plunge the world into war. But this clash will be followed by Christ’s return, when war and starvation will be replaced by peace and plenty—for Ethiopia, Africa and the entire Earth.

For more on the future of Ethiopia and how events in Africa will directly impact you, read our free booklet Libya and Ethiopia in Prophecy.