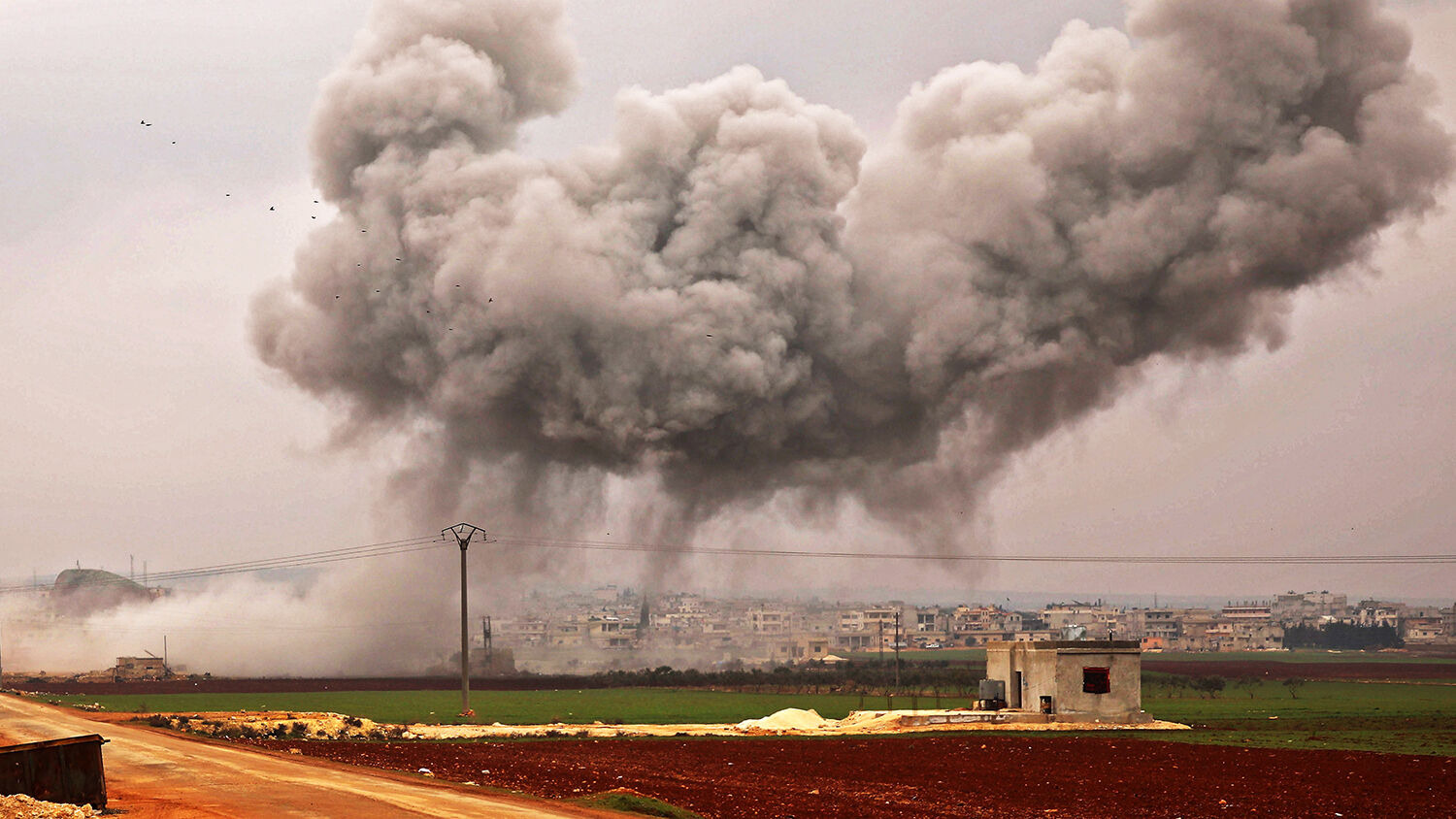 Smoke billows following a reported Syrian government air strike on the town of Atareb in the rebel-held western countryside of Syria’s Aleppo province on February 13, 2020 as regime forces push on with their offensive in the country’s northwest.
AAREF WATAD/AFP via Getty Images

On May 4, the Israeli Air Force struck multiple Iranian targets in Syria near Aleppo and the al-Bukamal border crossing with Iraq, where Iran has a military base, killing a number of Iranians. These air strikes followed five other attacks in the last two weeks and several hundred strikes in the past few years.

Israel’s persistence has finally begun to pay off. For the first time since Iran set foot in Syria, it has begun withdrawing its troops.

A specifically notable attack occurred on March 11 when Israeli air strikes “ripped apart Iran’s Imam Ali base” near the al-Bukamal border crossing, according to the Jerusalem Post. Last week’s attack was not far from this base. As a result of the continual barrage of Israeli air strikes, “the Islamic Republic is reducing its forces and clearing out from bases in the war-torn country [of Syria].”

Iran built this extensive military base in September and October of last year. Israeli-based satellite imagery analysis firm ImageSat reported that the al-Bukamal base has seen “intense construction.” This Iranian-controlled base was built with fortifications, access roads, and several warehouses to store precision-guided missiles. Seth Frantzman called the base and border crossing a kind of “highway of pro-Iranian power.”

Why would Iran want to leave this military base it built not even a year ago? Because Israel has been actively working to uproot Iranian entrenchment in Syria.

The day before the May 4 air strike, Israeli Defense Minister Naftali Bennett said, “We will not give up nor allow the establishment of a forward Iranian base in Syria,” adding he had established “a goal that within 12 months Iran will leave Syria.”

To Israel, Iranian entrenchment in Syria is a matter of life and death. Allowing Iran to increase, or to maintain, its power in Syria puts many Israeli citizens, especially those living in the northern Golan Heights, at risk of losing their lives to Iranian attacks.

Since then, Israel has conducted several hundred strikes against Iranian targets in Syria, and even in Iraq. These attacks intensified when Bennett became Israel’s defense minister on Nov. 8, 2019. In February, Bennett said, “We are in a process of switching to hurting the head of the octopus—Iran’s power” and vowed to “continue to increase the strikes” against Iran “until we reach the ultimate goal: driving Iran out of Syria.”

Six months later, Israel is seeing the fruits of its labor. Iran is on the way out of Syria, something the Trumpet has forecast for 17 years.

In the June 2003 Trumpet, editor in chief Gerald Flurry wrote about “A Mysterious Alliance” that would escape Iran’s grasp and align with Germany. At the time, there was little evidence Germany would become a major power, and Iran’s Islamic Revolutionary Guard Corps was heavily involved in Syria, even helping the Syrian regime to begin building a nuclear reactor in 2004.

In his booklet The King of the South, Mr. Flurry writes about Iran’s strategy to gain control of the Middle East and its oil trade. This would lead Iran to rise in power and push at Europe through terrorism, nuclear development and control of the Red Sea (request your free copy). However, he explains that Iran will lose power in Syria.

Though Iran has historically been a close ally of Syria, Mr. Flurry forecasts that “Syria would quickly cave in if Iran were beaten or forced to stop supporting terrorism.” This is exactly what is happening in Syria today.

“Though it was once seen as an asset which was key to keeping the regime in power, according to a senior defense source, Iran has become a burden for the regime of Syrian President Bashar Assad, which is paying increasingly heavy prices due to its presence on its territory” (Jerusalem Post, May 5; emphasis added).

Israel’s preemptive war against Iran in Syria has caused both the Russian and Syrian regimes to become frustrated with Iran. Iran is beginning to consider whether it should remain in Syria. But Israel will not force Iran out alone.

In the September 2012 Trumpet, Mr. Flurry wrote a landmark article: “How the Syrian Crisis Will End.” He wrote:

Did you know that the book of Psalms prophesies the future of Syria? This nation is an important part of the balance of power in the Middle East, and Psalm 83 prophesies that there is about to be a dramatic, violent shift in Syria’s alliances. …

Right now, it has been primarily Israel’s effort causing Iran to begin to withdraw its troops. But the Bible says we should expect Germany to become involved soon.

Psalm 83 lists several moderate Arab nations that will ally with Germany. Verses 5-8 read: “For they have consulted together with one consent: they are confederate against thee: The tabernacles of Edom, and the Ishmaelites; of Moab, and the Hagarenes; Gebal, and Ammon, and Amalek; the Philistines with the inhabitants of Tyre; Assur also is joined with them: they have holpen the children of Lot. Selah.”

In “Who Are the Hagarenes?” in the November-December 2018 Trumpet, we wrote:

Bible commentaries and ancient history show that the Hagarenes were a semi-nomadic people who lived in the desert region northeast of Ammon and Moab, modern-day Jordan. They are distinct from the Arabs of Saudi Arabia, who are listed in this same verse by the term “Ishmaelites.”

Forester’s Geography of Arabia says that the Hagarenes settled between the lands of Gilead, Bashan and the Euphrates. Today, this region is Syria.

The Assyrian king Tiglath Pileser iii mentions them as living in the same region in the 700s b.c. When the Psalm 83 prophecy says the Hagarenes will be part of the Arab alliance, it is actually referring to the modern-day nation of Syria.

Psalm 83 says that Syria will ally with Assur, another biblical name for Assyria. The cruel, warlike Assyrians are recorded in the Bible living in Mesopotamia beginning in the 16th century b.c. In the sixth century b.c., they migrated to the southern shores of the Black Sea, then up into Scythia, then across into Central and Western Europe by about the third century b.c. When the Romans encountered them around this time, they referred to them as Germani, meaning “war men.” Thus, the ancient, warlike Assyrians became the people of the modern-day nation of Germany.

Watch for Germany to become more involved in the region and for Syria to ally itself with Germany. For more information, please read “How the Syrian Crisis Will End,” by Mr. Flurry.