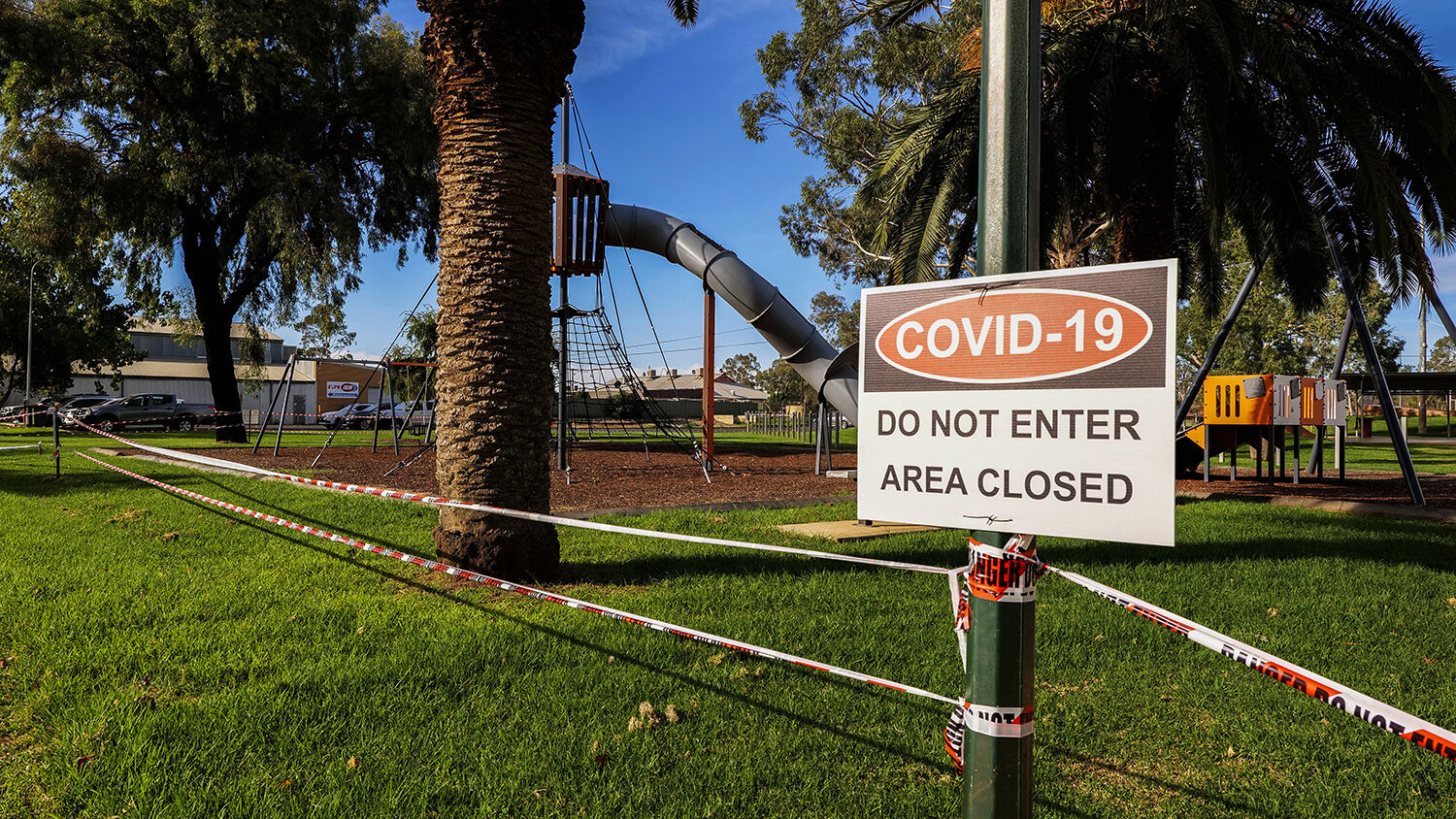 A covid-19 sign and tape cordoning off a playground is seen on April 17 in Cobar, Australia.
Jenny Evans/Getty Images

In the covid-world, we are told to obey the ‘experts.’ Should we?

Wherever you are, you are likely facing some form of coronavirus restriction. Local governments are more involved in your life than ever before. The list of dos and don’ts is almost comical.

You can go outside, just be sure to observe the six-foot social distancing rule. Don’t go anywhere with more than one person, outside of your family. Go enjoy your local park with your kids, but under no circumstances should you let your kids get on the playground. You can go shopping for nonessentials, just remember that you can’t have more than one person per 12 square feet in the store. And be sure to enjoy the beach, but don’t go unless it is to exercise. And don’t go at all if it is crowded. A nice alternative option would be to go for a drive. Don’t stop at a café though; dining-in is forbidden. And be sure not to drive more than 30 miles from your home. And don’t even think about leaving the state. These are just a few government restrictions the Australian state of Queensland has experienced in recent weeks. And these are tame compared to other states and countries.

And if you forget the rules, that’s OK. The on-the-spot $1,334 fine for “covid-19 related infringements” will help jog your memory. But don’t worry. If we just obey the “experts,” then we can get back to normal.

‘Let Us Handle This’

The coronavirus crisis is giving power to a classic elitist idea: They can run your life for you better than you can. The plethora of rules that bombard you as you step outside are proof of that idea. Bureaucrats are dictating where you can go, what you can buy, and who you can see.

This action leads quickly down a dark path—ultimately to totalitarianism. Look at one example in the United States. Louisville Mayor Greg Fischer tried to criminalize drive-in church services. It was blocked by a district judge who wrote, “That sentence is one that this court never expected to see outside the pages of a dystopian novel. … The mayor’s decision is stunning. And it is, ‘beyond all reason,’ unconstitutional.”

The recent crisis has exposed many leaders’ desire for control. Just take the rollback of restrictions in Australia. Queensland Chief Health Officer Dr. Jeannette Young stated that future restriction-lifting was contingent not on science and covid-19 infection rates, but on the actions of the public. “If we see large gatherings in places, that will concern us greatly and we’ll have to rethink,” Young stated.

In other words, if the public doesn’t act the way we want—even within the current mandates—restrictions will remain or be reimposed. As George Orwell wrote in 1984, “We know that no one ever seizes power with the intention of relinquishing it.”

The Australian government’s health website lists three things that need to happen before restrictions are lifted; First is community testing; second, more rapid response teams; third, using the covidSafe app. Notice that none of these relate to actual coronavirus numbers, of which there have been 97 deaths and fewer than 7,000 confirmed cases. Those numbers peaked on March 28, more than a month ago.

The covidSafe app is a great example of a government strong-arming the public. The app is used to alert someone if he or she comes in contact with anyone who has covid-19. The government is stressing that the app is voluntary, but most Australians don’t want it. Something about a government-interconnecting app just doesn’t agree with people.

Despite deep unpopularity, it remains a precondition. Life cannot go on until at least 40 percent of Australians download the app.

Listen to Fear, Not Facts

Fear is another tool used to control the public—fear of a second wave. The rationale is that it’s better to be safe than sorry. So the economy will continue to tank as we fear the possibility of another spike in virus cases.

Then there is the fear of repercussions. We have all seen the teams of officers arresting sunbathers. Then there’s the recent actions of a Dallas, Texas, judge who attempted to jail the owner of a hair salon.

And there is fear generated by outdated data. In mid-March, the Australian government was still predicting a worst-case scenario of 15 million cases and 150,000 deaths. This is a worldwide phenomenon. Governments continue to rely on the debunked and disgraced “experts,” led by the United Kingdom’s Neil Ferguson. Had these experts been correct, we would have seen millions of deaths by now.

As a result, citizens—young and old—are stripped of their livelihoods and freedoms. It doesn’t matter that the virus almost exclusively targets the elderly or those with preexisting conditions. Daily Wire host Andrew Klavan described it tongue-in-cheek, “The virus is very dangerous if you are a person over 65, or who will one day be over 65, or who once saw someone who was 65.” It doesn’t matter who you are, you are supposed to be afraid.

“The costs of this approach are mounting,” Kasuhik Basu wrote in an article for Project Syndicate. “In emerging economies in Africa and South Asia, prolonged lockdowns represent a tradeoff not between saving lives and saving stock prices, but between saving some lives from covid-19 and condemning far more people to destitution, hunger and death by other means.”

“But,” the skeptic may say, “don’t these experts have years of experience? Isn’t the government more informed than the average citizen? Shouldn’t we give the experts benefit of the doubt?” In a way, yes. There is an expert—just one—that we ought to be listening to.

In the July 1998 Trumpet magazine, editor in chief Gerald Flurry wrote, “As we put more and more trust in man, we push our responsibility to God aside. This is a fatal flaw in our thinking which destroys nations!” By trusting in any man—even our own selves—to solve our problems, we risk what we are hoping to save!

Look at your own nation right now. Chances are, it is taking an economic beating. Can’t attend church services? Can’t see Grandad and Grandma? Stuck at home? Lost your job? See the strife, the fear, the anxiety? These things are curses on our society! And the solutions won’t come from men. Anciently, the Prophet Jeremiah knew this: “Thus saith the Lord; Cursed be the man that trusteth in man, and maketh flesh his arm, and whose heart departeth from the Lord” (Jeremiah 17:5).

Jeremiah lived at a time when his fellow Jews were doing all they could to protect themselves from a Babylonian invasion—all except trust in the God who had delivered them countless times before. Jeremiah said this attitude would only bring curses. And so it did. We would be wise to learn this lesson.

The Prophet Isaiah foretold that in the end time our leaders would lead us to ruin: “O my people, they which lead thee cause thee to err, and destroy the way of thy paths” (Isaiah 3:12).

But even in declaring this destruction, both Jeremiah and Isaiah had messages of hope. “Blessed is the man that trusteth in the Lord, and whose hope the Lord is” (Jeremiah 17:7). Jeremiah called God “the hope of Israel” and “the fountain of living waters” (verses 11, 13). Couldn’t our nations do with some of that same hope today?

It begins with getting to know God, “the hope of Israel.” Request our free book How to Pray to begin getting to know God. Establish that connection with the one Being who has the solution to every problem we will ever face! To learn about God’s solutions and take time to get to know the most misunderstood book in the world, the Holy Bible, request Mystery of the Ages, by Herbert W. Armstrong. “Mystery of the Ages,“ Mr. Flurry wrote, “is a synopsis of the entire Bible. Its author, Herbert W. Armstrong, said it was the most important book he wrote. He actually made the bold claim that, because it makes the meaning of the Bible plain, it was the second-most important book after the Bible!”

It may come as a surprise, but God has laws of quarantine. He has laws of health and of financial prosperity. He has laws that bring peace, abundance, joy, strong marriages, happy families. He has laws that promise real freedom! God is the expert on how to live! And He records the how right in His Bible. Even in the midst of this time of chaos, those promises are there for you and me to claim. If we would only listen to the expert.