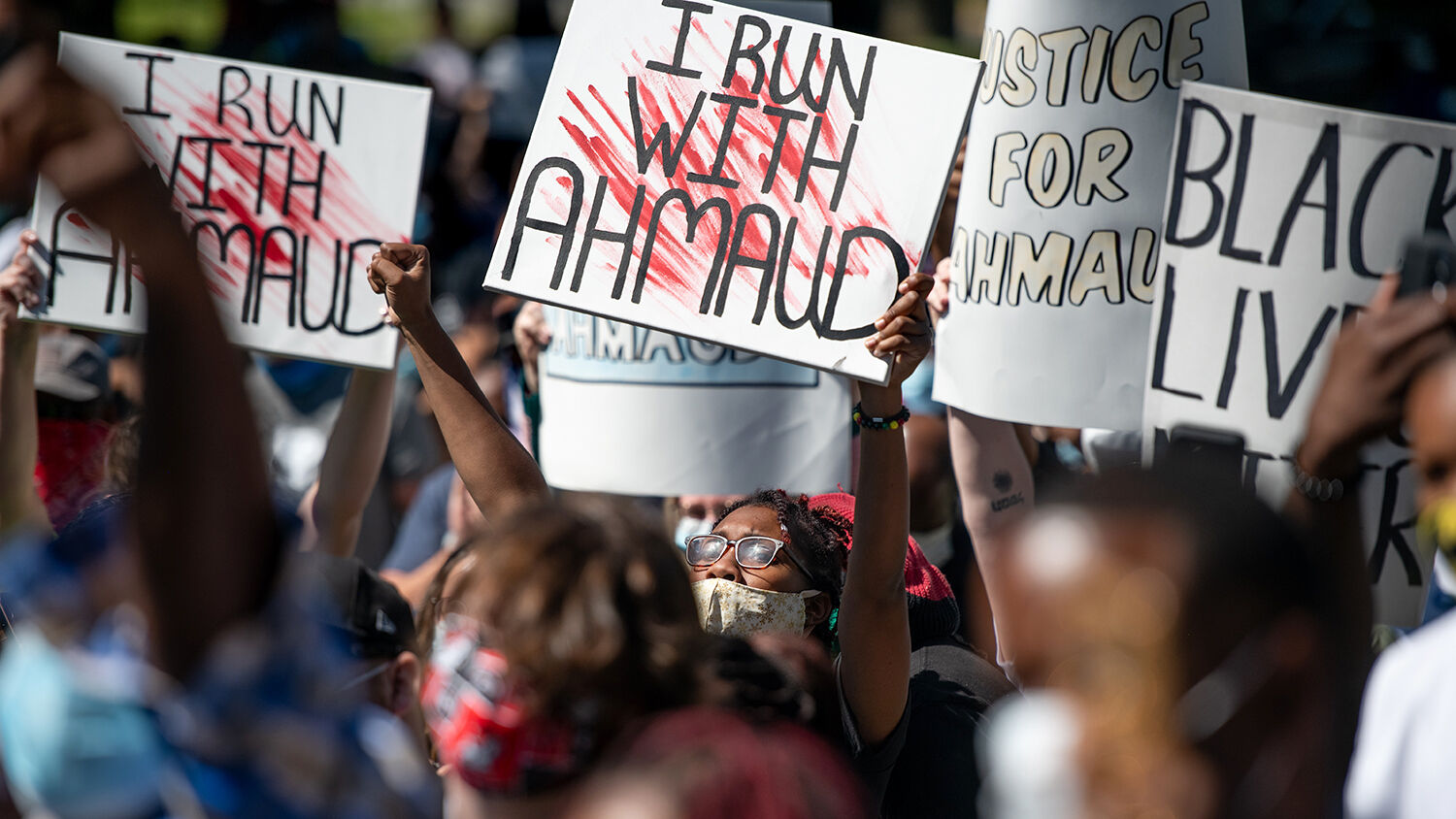 Demonstrators protest the shooting death of Ahmaud Arbery at the Glynn County Courthouse on May 8 in Brunswick, Georgia.
Sean Rayford/Getty Images

A tragedy has the potential to exacerbate America’s racial divide.

Two white men were arrested and charged with murder after a leaked 36-second video sparked a national outcry. The video showed Gregory McMichael, 64, and his son, Travis McMichael, 34, as they confronted and killed Ahmaud Arbery, 25, a black man. Arbery was jogging through Brunswick, Georgia, on February 23, when the two men confronted him. After a scuffle between Travis and Arbery (it’s unclear who initiated contact), Travis shot Arbery with a shotgun.

The Georgia Bureau of Investigation arrested Gregory and Travis McMichael on May 7, some 12 weeks after the shooting. The reason it took so long to arrest these men was that the police report of the incident indicated that Ahmaud was a suspected burglar who violently attacked Travis when he was approached and that Travis shot him in self-defense. But on May 5, a video of the incident, filmed by onlooker William Byran, was publicly released. This video shows that Gregory and Travis McMichael blocked the road with their truck; Arbery changed directions to avoid them; Travis McMichael moved to intercept Arbery while holding his shotgun, and then shot him during the ensuing fight.

The video soon went viral and prompted a national outcry. Georgia’s district attorney recommended the case go to a grand jury. Since courts in Georgia are closed due to the coronavirus pandemic, it is unlikely that a grand jury would convene until at least mid-June. The Georgia Bureau of Investigation has opened its own probe.

United States President Donald Trump has watched the video. “I saw the tape, and it’s very, very disturbing,” he told Fox News on May 8. He then added that he is leaving the matter to the state of Georgia, noting that there could be more to the incident than was shown in the video. “You know, it could be something that we didn’t see on tape,” he said.

Since Gregory McMichael is a former police detective and investigator for the Brunswick district attorney’s office, this murder case has raised some potentially disturbing questions about policing in Brunswick, Georgia. It is important to get to the bottom of what happened in Brunswick and see justice done in this tragedy. Unfortunately, there will undoubtedly be some powerful people who seek to exploit it for selfish purposes.

American basketball star LeBron James has already pointed to Arbery’s killing as evidence that black men like himself cannot even go jogging in America. “We’re literally hunted EVERYDAY/EVERYTIME we step foot outside the comfort of our homes!” he posted on Instagram. In the past, exaggerated statements such as this from celebrities and politicians have helped inspire riots that resulted in millions of dollars in property damage.

“Race is a highly charged subject in the United States today; past wrongs and present inequalities create fertile ground for hurt, frustration and anger,” writes Trumpet editor in chief Gerald Flurry in his booklet Great Again. “It would be overstating it to say there is no racism among America’s law enforcement officers. But there are some who are scrutinizing and magnifying this issue for evil purposes. They are using it dishonestly to justify or excuse some terrifyingly dangerous behavior. They are stirring up emotion and anger—but none of it is truly intended to solve the problem.”

A sobering prophecy in Isaiah 1:7 shows that end-time Israel (the United States and Britain primarily) will be cursed with race problems as a result of its rebellion against God’s law: “Your country is desolate, your cities are burned with fire: your land, strangers devour it in your presence, and it is desolate, as overthrown by strangers.” This is a terrifying passage about strangers (non-Israelites living in the nations of Israel) rioting in the nation’s cities.

The sins of the American people will ignite further race problems until cities burn with fire. This is not a easy message to hear, but it comes from the Bible. “God is trying to help us see that something is frightfully wrong!” Mr. Flurry explains in Great Again. “He says, Don’t point fingers at the leaders, because you’re all to blame!” Please request a free copy of this booklet to learn more about where America’s race riots are leading and how God will restore America to greatness after its people finally turn to Him and repent.