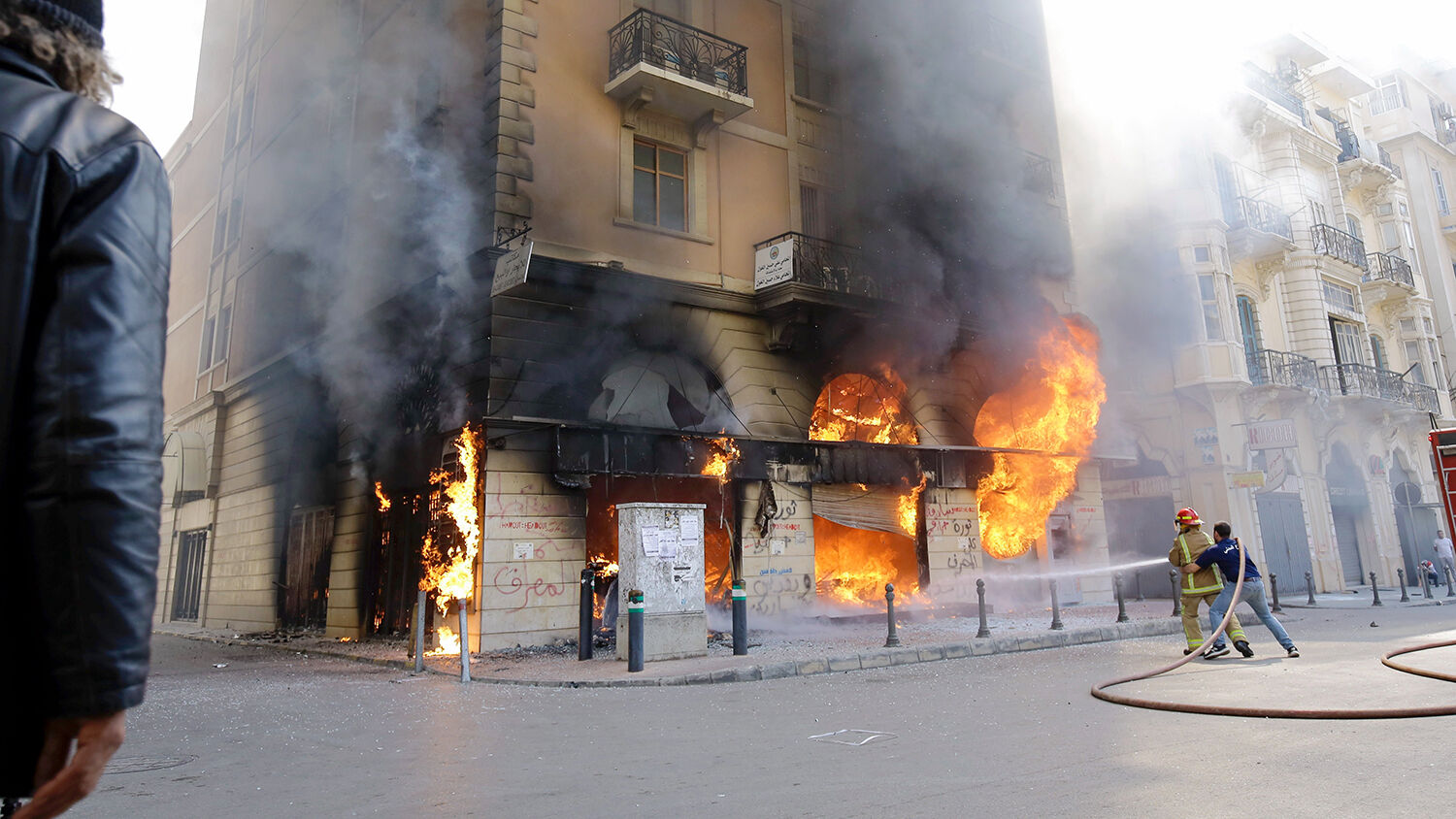 Lebanese firefighters work to extinguish the fire at a bank branch set ablaze by demonstrators following the funeral of protester Fawaz al-Samman, in the northern port city of Tripoli on April 28.
IBRAHIM CHALHOUB/AFP via Getty Images

Is Iran’s power slipping in Lebanon?

After the Lebanese government declared a state of emergency over coronavirus on March 15, the country experienced a brief moment of relative calm. Under the surface, however, economic hardships worsened, corruption increased, and frustrations intensified. Renewed protests once again threaten to topple the Iran-backed Hezbollah government.

Protests reignited on April 27 as hundreds of demonstrators gathered throughout Lebanon’s cities from Tripoli in the north to the country’s capital of Beirut to Sidon and Nabatieh in the Hezbollah-controlled south.

Civilians have become infuriated over the country’s economic crisis as the Lebanese pound has plummeted in value by more than 50 percent since October. Shops are closed. Food and raw material imports have been slashed. More than half the nation lives in poverty. Lebanon is teetering on the edge of financial disaster, and the people want change.

Protests fueled by worsening economic conditions in Lebanon broke for the third night in the latest wave of unrest https://t.co/MoGhfSDZDq pic.twitter.com/UNgcPRPSkK

One individual died on April 28 of wounds sustained while protesting the night before. After his sister claimed he was shot by the Lebanese Army, the protests intensified. At least a dozen Lebanese banks were vandalized and set ablaze as they were besieged by Molotov cocktails.

The Lebanese Armed Forces have been one of the few respected institutions in the nation by the protesters; however, attitudes are shifting. Lebanese soldiers were pelted by rocks and other projectiles as they chased down protesters. A military vehicle was set on fire in Tripoli on Monday night. Early Tuesday, protesters smashed the windshield of another military vehicle carrying soldiers.

The Lebanese military estimates that 81 security personnel were injured in clashes with civilians; the number of civilians injured remains unclear.

According to Al Jazeera, the protesters’ issue is not with the Lebanese Army itself, but the government it is protecting.

When protests began last October, protesters demanded a new government to replace what they called the “old elite.” In the last elections, Hezbollah won a small majority in the parliament and now controls the government’s Health Ministry and other smaller government offices, which it has used to siphon off government funds to pay for its militiamen and military equipment, to the detriment of the nation’s economy. The country’s civilians recognize that Hezbollah is to blame for their economic poverty, so they came out in protest against the government.

The October protests led to the resignation of then Prime Minister Saad Hariri. On December 19, Lebanese President Michael Aoun, who is believed to be in Hezbollah’s back pocket, selected Hassan Diab to be the next prime minister. Diab and his cabinet were nominated by parliament, receiving backing from Hezbollah’s March 8 Alliance coalition, but not his own Sunni parties.

Instead of weakening Hezbollah’s control, the protests removed perhaps its only friend in the government. Now, Lebanon’s new government is dominated by the Shia Islamist Hezbollah political wing, with no representation from the pro-Western opposition. In a government designed to separate power between a Sunni prime minister, a Shia speaker of parliament, and a Christian president, all three offices have now been hijacked by the Iran-backed Hezbollah coalition.

On April 15, Hanin Ghaddar told Middle East Forum Radio that this new government’s appointment would lead to a “bigger, more vicious [and] angrier” second wave of protests by “hungry people in the streets who have nothing left to lose.”

Will the second round of protests accomplish what the first round failed to do?

The imposition of United States sanctions on Hezbollah in the last two years has hurt Hezbollah’s income. Unable to determine whether a company is supporting Hezbollah, many private companies are steering clear of investing in Lebanon for fear of suffering secondary sanctions from the U.S.

Hezbollah is losing its funding. The pro-Iranian party received a large portion of its income by siphoning funds from the government. However, with the economic crisis, there is less money to go around.

To make matters even worse, according to Dr. Matthew Levitt, Iran may “very suddenly cut back its financing for Hezbollah” by 40 percent, noting Iran has already done so on three previous occasions. U.S. sanctions on Iran’s banking, oil and shipping sectors are taking their toll on the Islamic Republic’s economy, forcing it to cut back funding.

Ghaddar said, as a result of the financial disaster, Hezbollah is “incapable of providing its own [Shia] constituency with jobs and basic needs.” Hezbollah is struggling to pay its workers and militiamen.

The only thing keeping Hezbollah afloat financially is its ability to raise money overseas. Dr. Levitt told the Royal United Services Institute that Hezbollah had managed to “find a gap in the seams of European law enforcement,” especially in Germany, from which it could raise funds. The European Union recognizes Hezbollah’s militia as a terrorist organization, but not its political wing. This oversight has allowed Hezbollah freedom to conduct business, to collect zakat, and many other means of raising funds.

However, this is about to change.

On April 30, Germany designated all of Hezbollah, including its political wing, as a terrorist organization. If the rest of Europe follows Germany, Hezbollah could soon find itself in an even worse financial crisis.

The combination of widespread protest and a European ban could potentially cause Hezbollah’s collapse. As a result, Lebanon would be freed from the grips of Iran.

While Lebanon is practically controlled by Iran via its proxy, Hezbollah, we at the Trumpet are watching for Iran to lose its sway over the Lebanese government. In order for this shift in power to occur, Lebanon will need foreign support.

On January 8, the U.S. called on nato, which is primarily made up of EU countries, including Germany, to take over the Middle East. Since then, we have seen a sharp rise in German activity in the Middle East, from supporting an anti-Iran naval mission to training Saudi military forces to hosting a diplomatic conference to resolve the Libyan civil war. Most recently, Germany announced it would send 300 soldiers into Libya to support the internationally recognized government. America is on the way out of the Middle East, and a new German superpower is emerging to take its place.

A prophecy in Psalm 83 indicates that Iran will lose its sway in Lebanon. The prophecy lists several Arab nations that are allied in a sort of anti-Iran coalition. The Anchor Bible states, “History transmits no record” of these events in Psalm 83. That means this psalm must be prophecy for the future.

This passage in Psalm 83 seems to acknowledge the separation of Hezbollah from the rest of Lebanon. Among the nations listed in verses 6-8 are Gebal, which refers to the modern nation of Lebanon, and the inhabitants of Tyre, referring to southern Lebanon, home of the Hezbollah militia. According to Psalm 83, both parts of Lebanon are included in this prophetic alliance.

While the Bible does not say exactly how this alliance will be formed, it does tell us where Lebanon will find its foreign support. Verse 8 says, “Assur also is joined with them.” Assur is another biblical name for Assyria.

The cruel, warlike Assyrians are recorded in the Bible living in Mesopotamia beginning in the 16th century b.c. Their migrations can be traced through the southern shores of the Black Sea, Scythia, and into Central and Western Europe. When the Romans encountered them around the third century b.c., they referred to them as Germani, meaning “war men.” Thus, the ancient, warlike Assyrians spoken of in the Bible became the people of the modern-day nation of Germany.

“Continue to watch as Lebanon descends into another civil war,” Trumpet editor in chief Gerald Flurry wrote in “Why You Need to Watch Lebanon.” “[W]atch to see whether [Germany] decides to send its soldiers into Lebanon.”

With economic collapse staring Hezbollah in the face and increasingly violent protests leading to civil war, Lebanon will soon experience a dramatic shift in governance.