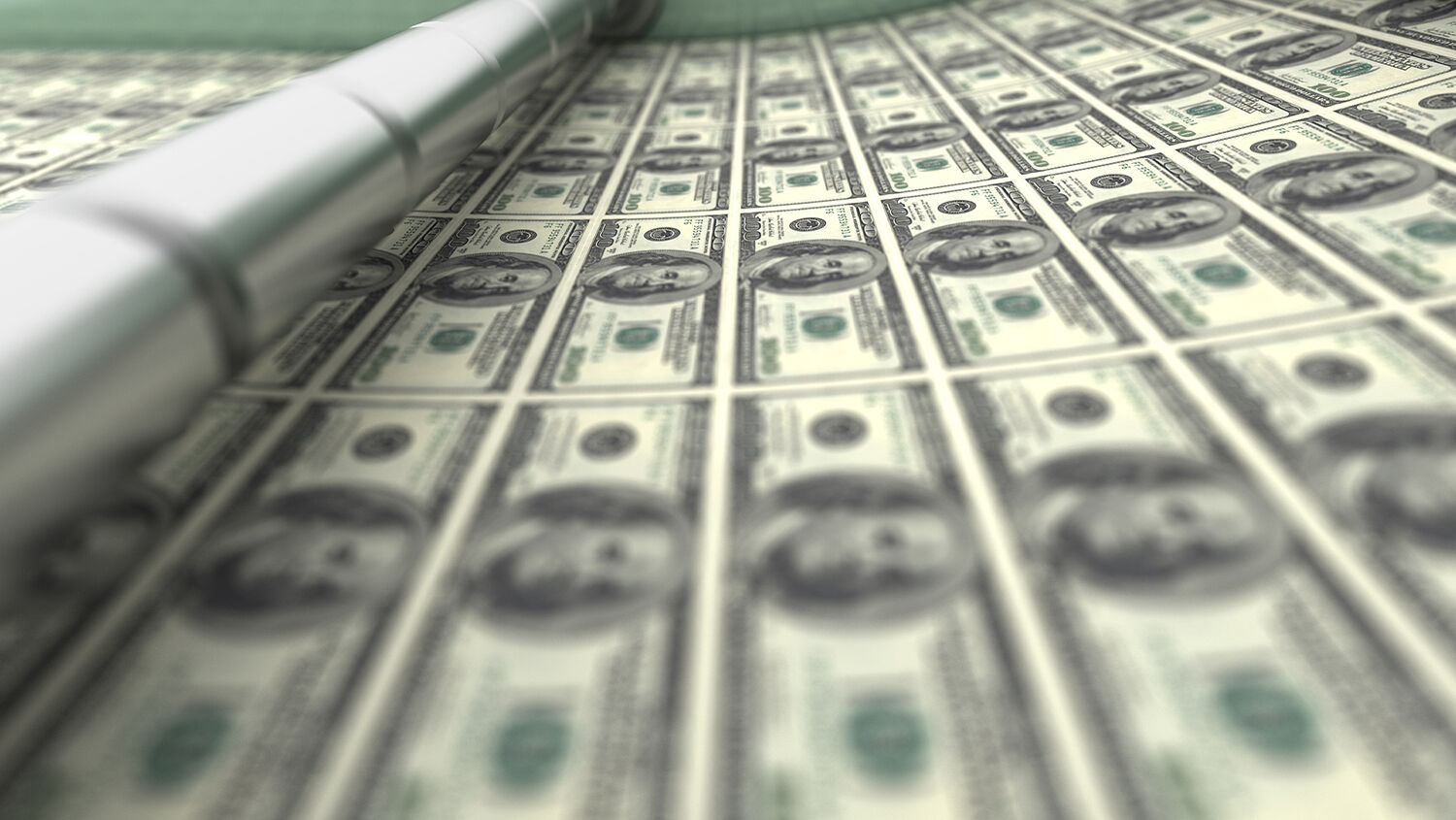 The language is technical. It appears in only the economic pages of the newspaper. But the results will be real, and the amount of money involved is staggering.

Fitch Ratings estimates that the world’s central banks will create a total of $6 trillion this year.

Of course, they won’t literally be printing it. It would be physically very difficult to print that much. You’d have to stack $100 bills 630 miles high before you had $1 trillion. At that height, you’d have to worry about satellites knocking your money pile over. By comparison, $1 billion would be roughly the height of the world’s tallest building, and $1 million only the height of a chair.

We’re in uncharted territory. Banks have never created money this quickly before. From 2009, and the aftermath of the global financial crisis, until the end of 2018, central banks created about $12 trillion. Now they’re creating half of that total—in a single year.

What is going on? It’s worth taking a few minutes to understand how money is made. After all, it very directly affects your wallet.

In our modern financial system, money is created from nothing all the time. You even play a role in this process. Anytime anyone takes out a loan, a bank creates money. If you borrow $100, the bank isn’t taking that $100 out of someone’s bank account and lending it to you. It comes from nowhere.

There used to be limits on how much money banks could create. Until recently, in the United States a large bank could loan out $1,000 for every $100 it had in assets. But in mid-March, that rule was quietly abolished. There are still lots of complicated rules that place some limit on how much money banks can create. But there are fewer restrictions than ever on the ability for ordinary U.S. banks to create money and loan it out.

This ability to create money out of nothing is the reason the amount of money in circulation is constantly fluctuating. In good times, lots of people are borrowing, and the money supply increases. But when times are bad, banks are unwilling to make loans and they call in their debts. In this case, they’re destroying money. Pay back a $100 loan and that money disappears. Our financial system is not set up to cope well with that, and the widespread destruction of money quickly causes major problems.

This is why the Federal Reserve and other central banks stepped in with what was then a radical new experiment after the 2008 financial crisis. If banks were causing problems for the economy by destroying money, then maybe the Fed could fix those problems by creating money.

Central banks creating money has long been a taboo. It’s too similar to governments simply printing money and spending it—policy that has led to total economic collapse time and again.

But the experts argued that since ordinary banks had stopped creating money, central banks needed to step in and do it, temporarily. It wasn’t too dangerous, they argued. Done carefully, they’d be replacing the ordinary money creation that goes on all the time.

So the world embarked cautiously on this new money printing—called “quantitative easing” (QE).

Central banks didn’t hand the newly created money directly to the government; instead, they bought government debt and other assets from banks. And they pledged to “wind down” this printing in the future: to sell the government bonds they had bought and then destroy the money they had created.

Twelve years later, our currency is not worthless. Most of the newly created money has not been destroyed—but other than that, things have gone well.

So central banks are now much more comfortable printing money. They’re printing it faster than ever. And many of the restrictions put in place in 2008 are being removed.

Both the Fed and the Bank of Japan have announced unlimited quantitative easing—with no cap. The Fed is also experimenting with new ways of printing money and injecting it into the economy. It announced in March that it would inject $1.5 trillion into the repo market—basically where banks go to borrow money. On April 9, the Bank of England announced it would print money and loan it directly to the government—breaking the last taboo on money printing, although the bank will keep the amount of money it creates this way relatively small.

“That this is even being considered, and under a conservative government, is a measure of how extreme the situation is,” wrote Foreign Policy. “It is also symptomatic that, rather than howls of outrage and immediate panic selling, the Bank of England’s decision has so far produced little more than a shrug from financial markets. They are under few illusions about the acrobatics that all the central banks are performing.”

When Fitch Ratings estimated that central banks would print $6 trillion, it was looking only at quantitative easing. It wasn’t counting the more unusual methods of money creation, like the Fed’s massive intervention in the repo market. So the actual total could be much higher. All around the world, central banks are now creating more money in more different ways and with fewer restrictions than ever before.

This has kept interests rates low, enabling our governments to borrow sums unprecedented in peacetime, while avoiding crippling interest payments.

The problem is, we’re playing with fire.

Money printing has proved incredibly destructive in the past. It doesn’t actually increase the amount of resources in an economy. If you have lots of money going around, but no extra goods, sellers raise prices.

In the past, money printing has led to hyperinflation. In 1920s Germany, the government printed money to pay its debts. The result was that it took a wheelbarrow full of cash to buy a loaf of bread. Zimbabwe tried it and the result was $100 trillion bank notes. Even more recently, Venezuela saw inflation of over 1 million percent. In such a case, your money loses value even as you walk to the store—because the government is printing more money as you walk.

Is this where America is heading? Experts aren’t worried about inflation right now. Oil is so cheap that refineries literally can’t give it away. The economy is shut down—so you don’t have too much money chasing too few goods. There’s not much money moving at all.

But what happens in the long run? When people go back to work? When economies wake up?

The economists don’t know. We’ve never done anything like this before. We’ve never printed this kind of money successfully and gotten away with it. And the restrictions put in place that have allowed us to “get away with it” thus far are being removed. Even if we have contained the danger thus far, in the next economic crisis they’ll be even fewer restrictions. Central banks will almost certainly be printing money and giving it directly to the government.

The foundations of our economy are much more fragile than most people understand. Your bank account is a flimsy thing to trust in. You could spend years saving up $10,000. The Fed was creating $75 billion a day last month. Even your local bank branch can now create vast sums from nothing. Are they someday going to wipe out your savings?

At this point, some may suggest buying gold. And there’s some wisdom to that. But even gold won’t save you from a total economic collapse. As we wrote in 2012:

Hyperinflation and a collapse of the dollar would create a crisis so big that even a gold reserve wouldn’t keep you safe.

The Bible forecasts an economic collapse so bad that even gold won’t be worth anything. Ezekiel 7:19 says people will throw it in the streets; the economic crisis will be so bad that people will only value things they can eat or use.

There is only one sure investment, completely beyond the reach or any central bank or government. Jesus Christ exhorts His followers: “Lay not up for yourselves treasures upon earth, where moth and rust doth corrupt, and where thieves break through and steal: But lay up for yourselves treasures in heaven, where neither moth nor rust doth corrupt, and where thieves do not break through nor steal: For where your treasure is, there will your heart be also” (Matthew 6:19-21). Invest in God and He promises to take care of us more surely than any gold can (verses 31-33).

How can you do that? Our free book Mystery of the Ages is a great place to start. It outlines God’s plan for this world and how you can be a part of that plan—and invest your time and money in it. And if you want to know more about godly money management in an uncertain time, our free booklet Solve Your Money Troubles! has both the practical advice and spiritual guidance you need.