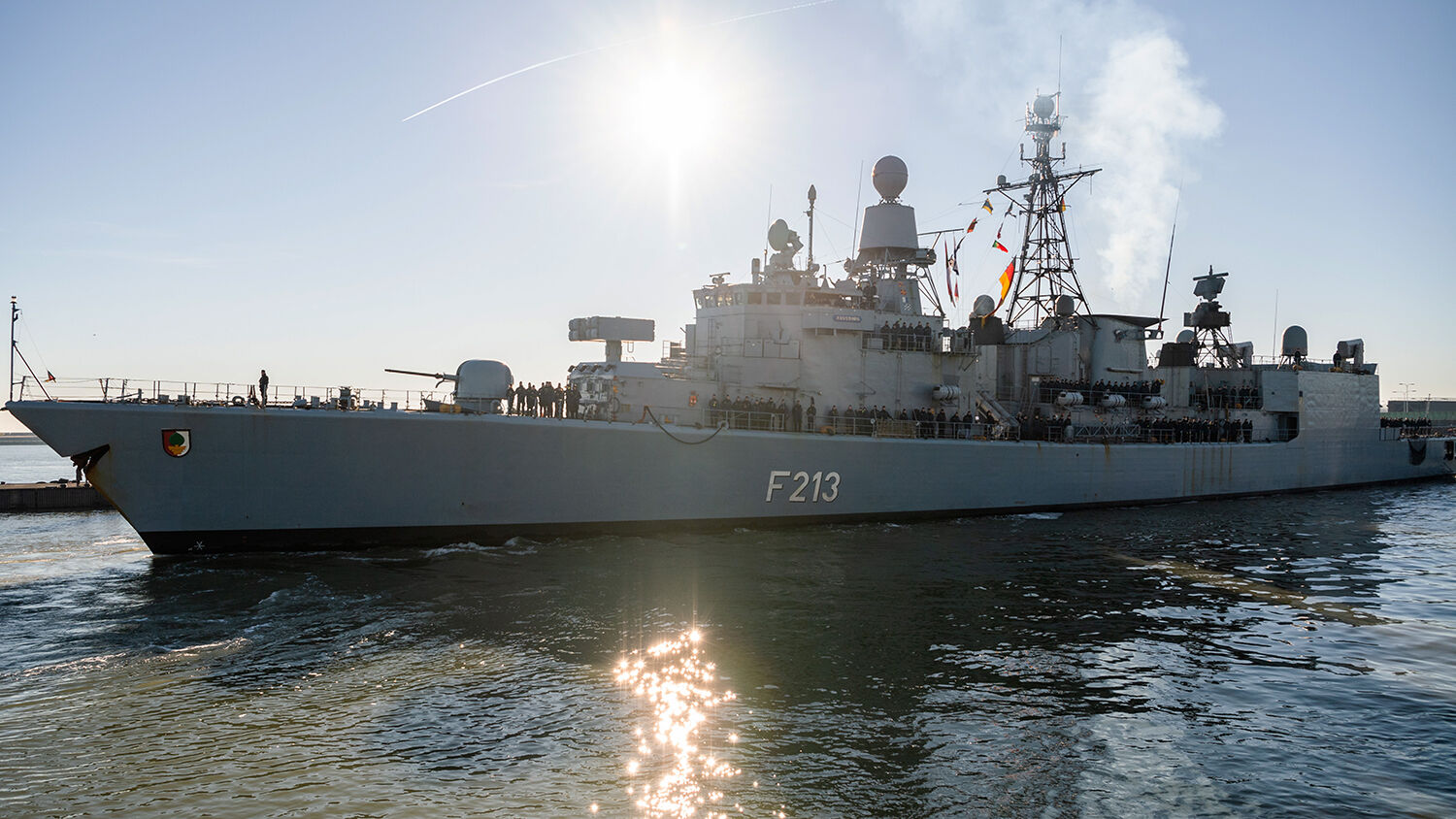 The frigate Augsburg returns from its mission as part of Operation Sophia on Feb. 15, 2019.
Mohssen Assanimoghaddam/Picture Alliance via Getty Images)

Germany committed 300 soldiers to Operation Irini in Libya on April 22. They will enforce an arms trafficking embargo on the war-torn country. At the same time, the European Union agreed to increase funding to the Libyan Coast Guard as part of Operation Irini.

Operation Irini is a continuation of Operation Sophia. Its stated goal is to enforce the UN arms embargo on Libya, and it currently employs surveillance aircraft and spy satellites. Naval ships will soon be involved too.

EU funding for Libya will increase by $108.5 million, reported the EU Observer on April 24. Part of the money will go to the Coast Guard, with the rest used to fight coronavirus. Officials have not yet decided on the exact breakdown, but it is questionable how much of that money will go to medical aid: As of April 27, Libya had recorded only two deaths from coronavirus.

This funding is in addition to a previous grant to Libya of $97.7 million, of which roughly half went to the Coast Guard.

“Libya’s ‘unity government’ in Tripoli is already calling for EU operations to be expanded,” wrote German-Foreign-Policy.com on April 24. This invitation is what the EU has been waiting for. One senior EU official told Vice News in February 2016 that Operation Sophia was “ready to move into Libyan territorial waters to stop people smugglers there, but it will not do so until it is invited by Libyan authorities.”

This invitation has finally come.

European nations have a poor record when it comes to saving migrants in the Mediterranean. They rely on the Libyan Coast Guard for most rescues, avoiding the necessity of bringing migrants to Europe. But Operation Irini, funding the Libyan Coast Guard, and deploying German troops to Libya are about more than migrants. These are all significant steps toward controlling North Africa.

Stability in North Africa has been in Europe’s interest since ancient times. In the eighth century, the Islamic Umayyad Caliphate controlled the northern parts of present-day Egypt, Libya, Tunisia, Algeria and Morocco. It then spread throughout Spain and entered France. If not for Charles Martel’s decisive victory at Tours in 732, France would also have been overrun. During the 19th century, Europe colonized much of Africa, with France only giving up Algeria in 1962. During World War ii, Adolf Hitler tasked Erwin Rommel with securing Egypt and other North African countries.

“Now, 70 years later, times are different,” wrote Trumpet editor in chief Gerald Flurry in his July 2016 article “Mediterranean Battle Escalating Into World War III!” “Instead of the World War ii Allied powers being in control, North Africa and the land around the Red Sea are governed by unstable dictatorships and radical Islamic terrorist groups that seek to bring the fight to Europe!”

Terrorist violence in North Africa and Europe has increased. Frequent and deadly attacks plague the Sahel region, despite European efforts to train local troops. Libya has descended into a proxy war. Somalia and other nations in the Horn of Africa are unstable.

How are Europe—and Germany—dealing with the problem? One of the reasons Germany lost World War ii was Rommel’s failure to secure North Africa. Mr. Flurry wrote that “this time around, Germany has learned its lesson. It will not allow Europe’s soft underbelly to be controlled by its enemy. For this reason, Germany is moving once again to conquer the Mediterranean.”

Mr. Flurry warned that a peace-keeping mission by Europe in and around Libya would serve as a cover for these ambitions. “Already, Germany has positioned itself to take over the region far more effectively than it did in World War ii,” he continued. “And this time, it won’t be seen as the aggressor.” Why? “Providing the perfect cover for German ambition, the European peacekeeping force will help Germany move closer to realizing Rommel’s goal of complete dominance of the Mediterranean!”

The motivation for Germany’s inroads into Libya comes from a desire to suppress radical Islam. Operation Irini is a peacekeeping mission (“Irini” means peace in Greek)—but that will not be its final outcome.

“Astute observers in Europe, especially Germany, see what is happening in North Africa. This is motivating European leaders to accelerate their own strategy to counter the Islamist tide,” wrote Mr. Flurry. The main source of this “Islamist tide” is Iran, the world’s number one state sponsor of terrorism. How could he know Germany, and not America, would be the one to ultimately destroy radical Islam?

Because of a prophecy in the book of Daniel: “And at the time of the end shall the king of the south push at him: and the king of the north shall come against him like a whirlwind, with chariots, and with horsemen, and with many ships; and he shall enter into the countries, and shall overflow and pass over” (Daniel 11:40). Mr. Flurry explains that this prophecy “shows a pushy foreign policy from the south being countered and destroyed by a far superior power from the north.” Radical Islam, led by Iran, is this king of the south that will push at a German-led Europe.

Can peacekeeping missions serve as a cover for empire-building? Watch Germany’s growing involvement in the Mediterranean. It is leading to a clash between these two major powers.

But this is not only a regional conflict. The violent clash between Europe and Iran is leading to a third world war.

Europe’s peacekeeping mission in the Mediterranean will lead to the fulfillment of Bible prophecies. In the short term, these prophecies forebode incredible destruction and suffering. But these same prophecies also contain a glorious element of hope for a better world to come. Order our free booklet The King of the South to read about this in detail.