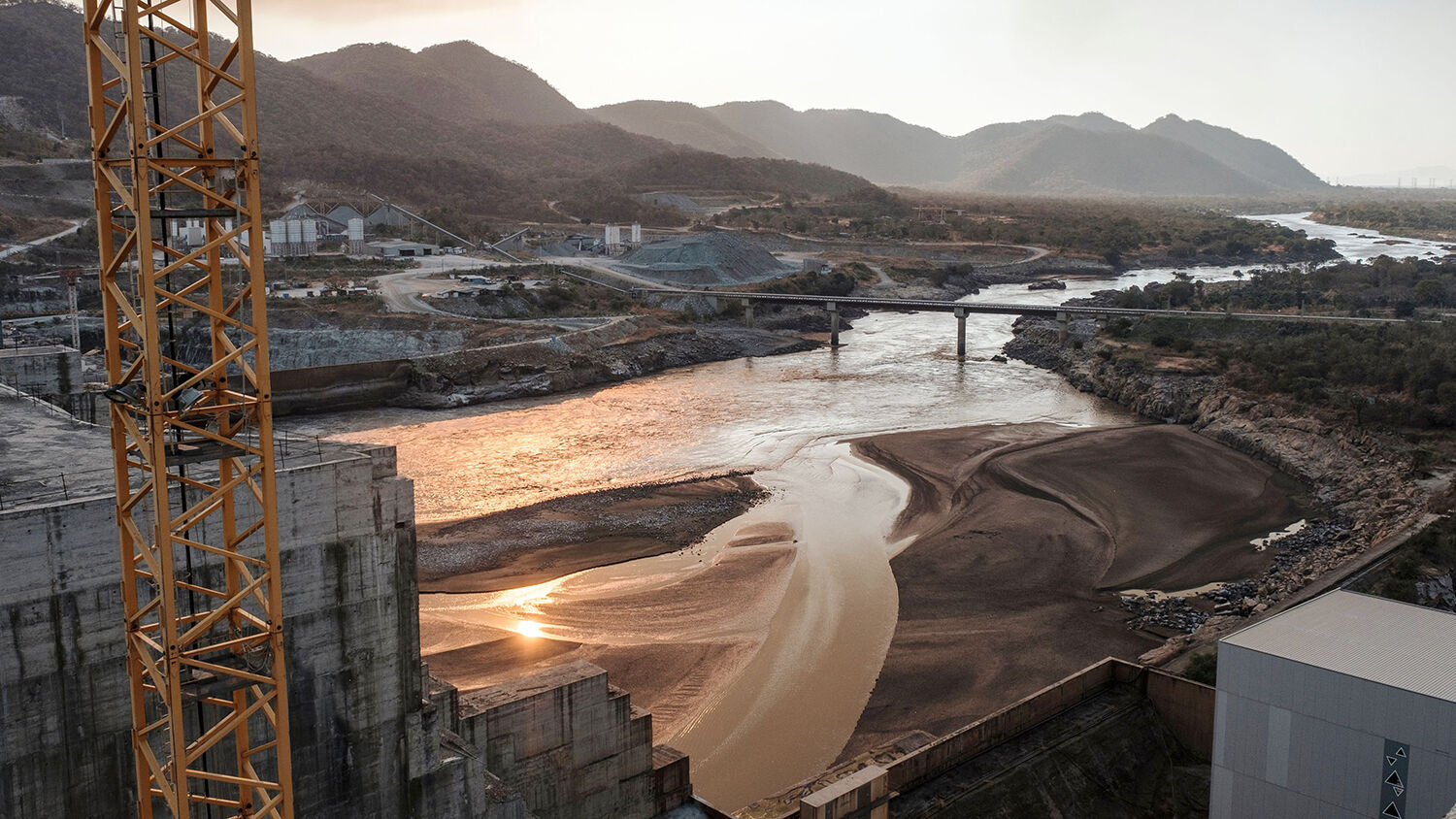 Is North Africa about to face a water war?

The Nile River is Egypt. Few nations in the world are so dependent upon a singular water source as Egypt is to the Nile. The river has been worshiped as the heart of Egyptian civilization for centuries. This river could once again shape world events.

Egypt’s annual flood cycle came to an end in 1970 with the completion of the Aswan High Dam. Even so, the river waters remain critical to the nation’s survival. Upset the Nile; upset Egypt. Alter the Nile; alter Egypt.

Hundreds of miles away, 635,000 cubic meters of concrete is currently altering the Nile. The Grand Ethiopian Renaissance Dam (gerd) is about to be filled.

The dam is located upstream in Ethiopia on the Blue Nile. Its construction is causing major friction between Ethiopia and Egypt. The dam was initially intended to hold 14 billion cubic meters of water. But in 2011—amid the Arab Spring upheaval—Ethiopia revised the plans. Upon completion, the dam will hold a gigantic 74 billion cubic meters of water.

In the ensuing years, Egypt has worked to come to an agreement on the construction and operation of the dam. But as the dam’s walls have risen, so has the pile of failed deals. Negotiations have stalled, with neither side willing to back down on key issues.

The main problems boil down to filling the dam and the yearly release of water. Egypt doesn’t want anything less than 40 billion cubic meters of water per year to share with Sudan. Ethiopia also wants to tie the release to the rainfall—meaning it could decide to release less water in a dry year.

For Ethiopia, the dam is a testimony to the industrial capabilities of the nation. It will also provide critical electricity and new farmlands for thousands of locals. The $4.8 billion project will turn Ethiopia into Africa’s largest exporter of electricity. The scope and potential of the dam has made it a national icon. Ethiopian Prime Minister Abiy Ahmed stated, “The reason why we put huge emphasis on this dam is because it is a symbol of our sovereignty and unity.”

Come June, this symbol will face its greatest challenge to date as Ethiopia begins to fill the dam. This may not seem like earth-shattering news, but consider the ramifications for those downstream.

Every drop of water stored in the dam is a drop that Sudan and Egypt do not receive. And filling the dam is no small accomplishment. The first stage will take two years, and it won’t be full even then. Egypt worries that during this time the nation’s water levels will plummet; there goes Egypt’s only supply of fresh water.

The fear is not unfounded. Ethiopia built the Gibe iii dam on the Omo River. As the tallest dam in Africa, the Gibe captured vast amounts of sediment and reduced the flow of the Omo. Instead of relying on regular floods, people downstream became dependent on irregular rainfall. The dam also impacted the flow of water into Kenya’s Lake Turkana, which gains 90 percent of its water from the Omo. The result? Mass population displacement, over-fishing, salinization and fighting for resources. Thousands in the region have died from malnutrition and tribal violence.

To Egypt, the gerd threatens the same, but on a national scale.

The tribes along the bank of Lake Turkana are one thing. The entire nation of Egypt is another. Gibe iii threatened the livelihood of thousands. gerd could threaten millions. It doesn’t matter that Ethiopia believes the dam’s impact will be minimal. Egypt—which Global Firepower ranked as the ninth-most powerful military in the world—does not take the threat lightly.

Egypt has reiterated that it won’t let Ethiopia fill the dam without signing an agreement. Whether that determination is expressed politically or militarily remains to be seen. What we do know is that upheaval is coming to the Egypt-Ethiopia relationship.

But where does this relationship fall into Bible prophecy?

Relations may be teetering now, with more upheaval on the way, but regardless of the ramifications of the gerd, God exposes the end result. The Bible forecasts of an alliance between these two nations in the near future. This is why seismic shifts in their relationship should catch our eye. The Bible indicates that both nations will soon join an alliance known as “the king of the south.”

“And at the time of the end shall the king of the south push at him: and the king of the north shall come against him like a whirlwind, with chariots, and with horsemen, and with many ships; and he shall enter into the countries, and shall overflow and pass over. … But he shall have power over the treasures of gold and of silver, and over all the precious things of Egypt: and the Libyans and the Ethiopians shall be at his steps” (Daniel 11:40, 43)

The Trumpet has long identified Iran as the head of the king of the south. Request our free booklet The King of the South for a detailed description. Iran loves to exploit a crisis; look how it hijacked the Arab Spring, spreading its influence across the Middle East and Africa. Notice what Trumpet editor in chief Gerald Flurry wrote in the October 2012 issue:

The emphasis here in verses 42 and 43 is on Egypt—then we have Libya and Ethiopia. This shows that Egypt is the big conquest! It is the real power behind Libya and Ethiopia, which suggests that it is going to have a heavy hand in swinging those two nations into the Iranian camp. …

Put simply, this means that we can expect Egypt—with Iran’s help—to lead Libya and Ethiopia into the Iranian camp!

Could deteriorating relations and conflict over the gerd play a role in that effort? Iran is no doubt fully aware of the tension building in Egypt. It exploited similar tensions in 2011. Do you think it won’t do so again? Iran wants Egypt in the fold!

Here’s what Barnes’ Notes says about this passage: “A conquest of Egypt was almost, in itself, a conquest of Libya and the Ethiopians.” That’s exactly right! The real powerhouse here is Egypt. Iran and Egypt are going to work together to swing Ethiopia and Libya into that Iranian-led “king of the south” camp—and they’re going to do it with a lot of violence! They’re very good at creating violence.

Storm clouds are brewing in North Africa, both figuratively and literally. If Ethiopia fills the dam without an agreement, expect relations to undergo drastic change.

God promises that conflict is coming to this world on a scale never before seen. Watch for these critical biblically prophesied events. Major upheaval is coming to the world, but don’t forget where it is leading. The Second Coming of Jesus Christ is at the door. Yes, dark times will come first, but they will be fleeting. Permanent peace is on the way. All nations will soon live in harmony. God will soon bless Egypt, Ethiopia and all the world with rivers of living water.