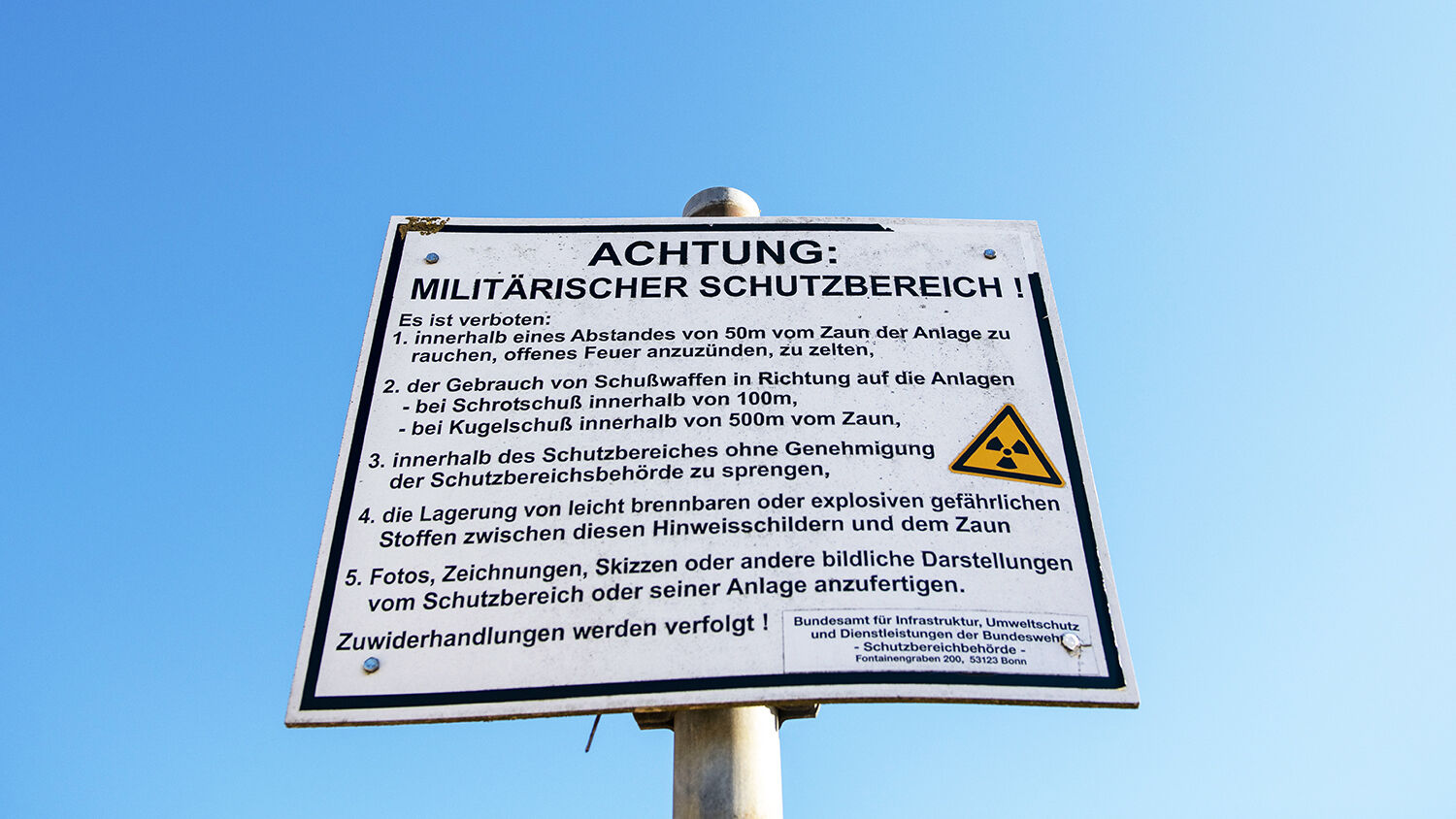 A sign reads: “Military Facility, Access Prohibited” outside the perimeter to the Büchel air base on February 27, 2019 near Cochem, Germany. The Büchel air base, officially a base of the German air force, the Luftwaffe, houses B61 nuclear bombs of the U.S. military.
Thomas Lohnes/Getty Images

America is trusting Germany with sensitive technology—and setting the stage for the ultimate double cross.

In the coming weeks, Germany will be receiving upgraded B-61 nuclear bombs from the United States. The modernization project, which began nearly a decade ago, will see Germany hold the world’s most advanced nuclear gravity bombs, potentially the world’s deadliest nuclear weapon.

When most think about nuclear weapons, they think of an intercontinental ballistic missile streaking through the stratosphere and plunging toward its target. Gravity bombs are different. They are meant to be dropped from an airplane. Their use is mainly for smaller, precision strikes, such as destroying military bases and hardened underground bunkers. The U.S. began production on B-61s during the Cold War, and they are currently stored in vaults at bases in Belgium, Italy, Germany, the Netherlands and Turkey. The B-61-12 is the newest variant. Like the others, it is designed to be delivered by European fighter jets in the event of war with Russia.

Upgrades will be costly: These bombs would be cheaper if they were solid gold. Nevertheless, there is a good reason so much money is being poured into them.

The upgraded bombs will have a new tail fin and navigational system, enabling self-guidance to their targets. They will be accurate to within 30 meters.

Accuracy is important for smaller, tactical weapons such as the B-61-12. Author Robert C. Aldridge writes, “Making a weapon twice as accurate has the same effect on lethality as making the warhead eight times as powerful. Phrased another way, making the missile twice as precise would only require one-eighth the explosive power to maintain the same lethality.”

Gravity bombs seem primitive compared to missiles. But there is a good reason the U.S. continues investing heavily in them: They are designed for striking heavily fortified underground targets.

The United States stores over 400 of these bombs in Europe. It is believed that none of these weapons are usable unless the U.S. gives the host nation the correct security code. Before the bomb can be armed, the code would have to be entered in its Permissive Action Link (pal) system.

Is the system foolproof? There are numerous safeguards on any nuclear weapon. However, no system is perfect.

Precisely how the pal works is a closely guarded secret. It likely involves cryptography, the science of making codes. In testimony before the House of Representatives, Adm. Gerald E. Miller warned in 1976, “It is possible, however, that these mechanisms can be defeated by a sophisticated enemy over a period of time.” Though pal and code-breaking technology have improved, so have espionage tactics.

There is also a risk that the uranium in the warhead could be removed and transferred to another weapon. Since Germany makes nuclear missiles for France, it could produce or stockpile some for itself should the military deem it necessary.

While much of this would be difficult and seems unlikely, one source warns that Europe, particularly Germany, will indeed use nuclear weapons in the near future.

Ancient Assyria corresponds to the German people today. As Herbert W. Armstrong proved in The United States and Britain in Prophecy, the U.S. and Britain are descended from ancient Israel. When the Bible discusses the Assyrians attacking Israel, it is speaking of Germany attacking the modern nations of America and Britain. This appears in multiple prophecies. One of these foretells America’s naive and blind trust in Germany today.

“And Aholah played the harlot when she was mine; and she doted on her lovers, on the Assyrians her neighbours …. Wherefore I have delivered her into the hand of her lovers, into the hand of the Assyrians, upon whom she doted” (Ezekiel 23:5, 9). God shows that Israel (here typified by Aholah, the harlot) is doting on, trusting the Germans, calling them an important ally. There are few nations today to which America entrusts its nukes. Germany, its enemy in two world wars, is the main one.

Why will God deliver them “into the hand” of Germany and a united European superpower? Because the U.S. has rebelled against God and His law. It has chosen to place its trust in a nation that was its bitter enemy less than 80 years ago.

Mr. Armstrong, founder of the Plain Truth magazine, warned for decades that a renewed military power would rise in the form of a united Europe. He warned that Germany, responsible for so much suffering in two world wars, would rise one final time under a strong leader to attack the United States and Britain.

The Bible warns that this will be the start of the Great Tribulation, the worst time of suffering mankind will ever experience. It will be so bad that if Jesus Christ did not return, mankind would exterminate itself (Matthew 24:21-22).

This war will be nuclear. In the April 1980 Plain Truth, Mr. Armstrong wrote, “[Germany] will first attack Britain for standing firm with the United States, and then they will return a lot of hydrogen bombs the U.S. has stored now in Europe!” The nuclear bombs America stores in Germany will be returned, in tragic irony, upon American cities and military installations.

The good news is that this Great Tribulation will not last long. The Bible shows that Jesus Christ will return to stop the suffering before mankind’s self-inflicted extermination. When that happens, nuclear war will become history.

For more on this topic, read “Europe’s Nuclear Secret,” by Trumpet editor in chief Gerald Flurry.