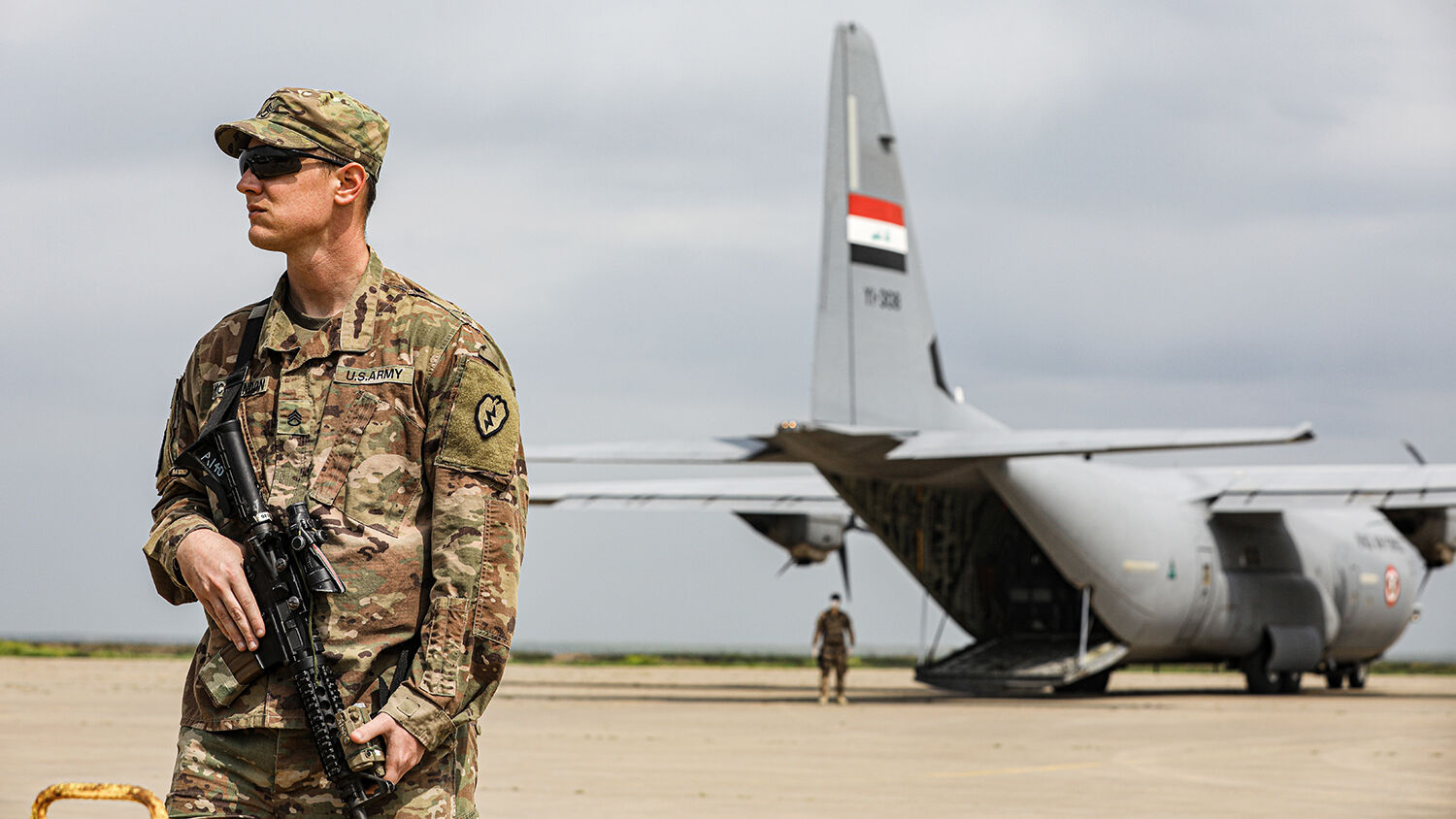 A U.S. soldier stands guard during the pull-out ceremony from the Qayyarah Air Base on March 26.
Ameer Al Mohammedaw/picture alliance via Getty Images

American forces transferred control of two bases to Iraqi officials over the past month as part of their planned withdrawal from the Middle East. While many welcome the opportunity to bring American troops home, few are paying attention to the cost of these handovers—in dollars and in prestige.

On March 17, United States forces left al-Qaim, a base in Iraq’s Anbar province. Then on March 26, they turned over Qayyarah Airfield, which guards the city of Mosul. A base guarding the oil-rich city of Kirkuk is next. The drawdown comes in the wake of Iranian missile strikes on American bases in Iraq.

The closure of al-Qaim is a “historic” handover, one coalition official told the Telegraph. Home to around 300 coalition troops under American leadership, its closure may prove to be “historic” in an ominous sense for the entire region.

According to the Military Times, the base is located at “a key border crossing area,” which could fall to Iran-backed Kataib Hezbollah militia at any time. This would create, according to Military Times, “what national security experts have warned is Tehran’s goal of a land route to the Mediterranean Sea for the movement of arms, proxies and illicit goods.” Should this occur, it’s doubtful that Iraqi security forces would be able to hold out for long—or if they’d even try.

While this is a major closure—and could further destabilize the region—its real significance is in the broader trend. Each base handed over or abandoned may seem insignificant and distant; after all, most people could not find al-Qaim on a map. But it points to America’s ongoing withdrawal from the Middle East, a process that is leaving a trail of wasted U.S. dollars and damaged American prestige across the Middle East.

The most prominent example came in late 2019. On October 6, President Trump ordered the withdrawal of 1,000 troops from Syria. This was timed to remove American forces from what looked like an imminent confrontation between Turkey and Russia. They left in a hasty, poorly planned manner, abandoning a key base at Manbij.

Twenty-four hours later, the base at Manbij became a symbol of shame for America before the eyes of the world.

Russian mercenaries and journalists entered the base the day after the Americans departed—and found it in perfect condition. According to one Russian journalist, everything except for weapons, ammunition and armored vehicles remained. Videos of journalists giving tours and mercenaries rummaging through soldiers’ abandoned belongings went viral. The videos showed everything from footballs and fridges full of Coca-Cola to military equipment and intact barracks with the air conditioning left on. The base itself was worth millions of dollars.

Militarily, the Russians gained a ready-made base for free, with its associated territorial control. They also gained a less tangible but equally important victory: one of morale.

Another official said, “This footage will play on endless repeat, not just around Russian state media. The notion that ‘Americans fled Syria, leaving behind perfect military bases for the Russians’ will also receive massive play around the Middle East as [Russian President Vladimir] Putin makes the case that he’s now the real superpower in the region.”

These bases are a financial gift to Russia. Building one is costly; Rand Corp. found that annual recurring fixed costs for a base range from an estimated $50 million to $200 million per year, depending on the region and operating requirements. That doesn’t include the cost of construction.

Not all bases in Syria were built from scratch; however, they all received significant U.S. investment to become capable of supporting operations.

The Kobani Landing Zone, a major logistics hub, has also come under Russian control. Other bases are controlled by the weak regime of Bashar Assad, effectively handing them over to Russia as well. These include combat outposts in Manbij, Ain Issa logistics base, Tel Salman fire base and Birsan logistics base.

During the hasty evacuation from Manbij, advancing Russian and Turkish units cut off a group of 50 to 100 American soldiers from the rest of their forces. The U.S. simply left them to “figure out” how to get around the blockage. A Syrian Army official later claimed that the Russians had to “escort” American forces out of the area. Whether this claim is true or not, it is another blow to American prestige.

More funding is not the answer. The real problem is invisible. It is one of willpower.

Prestige is all about the perception of power. When it is eroded by lack of action, other nations become more willing to throw their weight around and pressure for more withdrawals. This is why the once-proud American forces have become the laughing stock of Russians who are gleefully taking over. It’s not that the U.S. doesn’t have enough military might to intimidate Russia; the problem is that the U.S. refuses to use its power.

To understand how to fix this problem, we must understand the real source of America’s vast wealth, military power and dominance on the global stage. The answer is found in a key passage in the Bible.

The patriarch Abraham obeyed God’s law, and God promised his descendants abundant national blessings, such as wealth and military power. These blessings were given to America, exactly as prophesied in the Bible (request your free copy of The United States and Britain in Prophecy, by Herbert W. Armstrong, for a complete explanation). But America has failed to obey God’s law, and that is why it is gradually losing its superpower status.

“No longer is God obligated by His promise to continue our undeserving peoples in world prestige, wealth and greatness. Once we had been given such unrivaled position, it was up to us whether we should keep it,” wrote Mr. Armstrong in The United States and Britain in Prophecy.

Consider the Bible’s warnings in the context of America’s Syria debacle: “I will break the pride of your power” (Leviticus 26:19); “[Y]our strength shall be spent in vain” (verse 20); “[T]hey that hate you shall reign over you; and ye shall flee when none pursueth you” (verse 17). Why does America suffer from a weak will? Leviticus 26 and Deuteronomy 28 show that the cause is rebellion against God’s law.

This perfectly describes U.S. soldiers being ordered to flee from the front lines, relying on the mercy of their rivals. The world’s superpower is letting its enemies get control of strategic territory while it retreats and hides.

God warns that another curse for disobedience is that America will build in vain: “[T]hou shalt build an house, and thou shalt not dwell therein: thou shalt plant a vineyard, and shalt not gather the grapes thereof” (Deuteronomy 28:30). A lot has been built, at great expense. Who has truly benefited from that labor? Primarily America’s enemies. Very little has been reaped in terms of lasting victories.

The sacrifice made by U.S. armed forces is not a trivial matter. Every American should be concerned when money and manpower are spent in vain. Read our free book The United States and Britain in Prophecy to understand how God plans to restore the United States to greatness permanently.