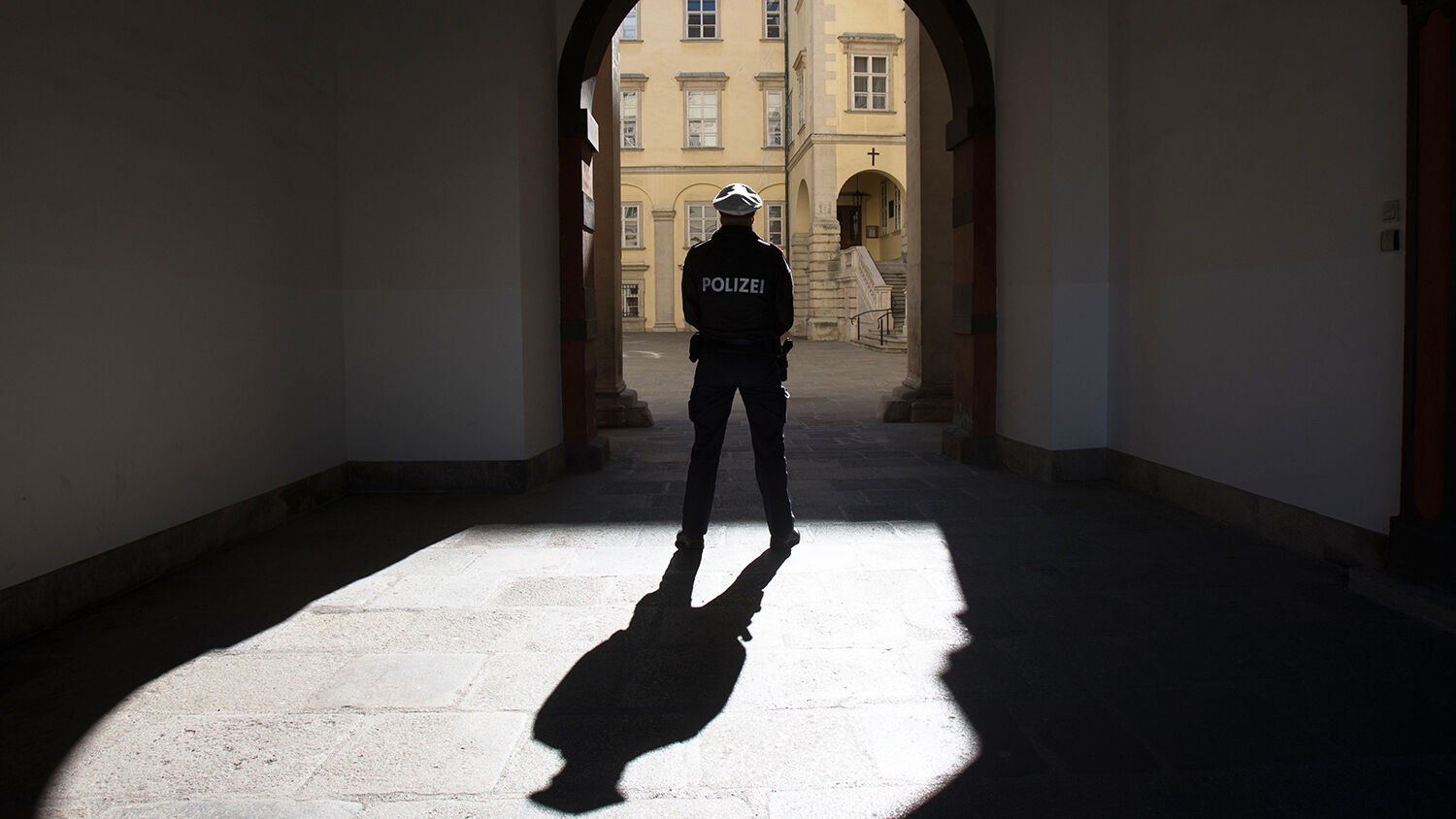 A policeman guards a passage of the Vienna Hofburg in Vienna, Austria, on March 15.
ALEX HALADA/AFP via Getty Images

In the fight against the ‘invisible enemy,’ the unprecedented is tolerated.

As coronavirus intensifies, European nations are shutting down. On March 16, Austrian Chancellor Sebastian Kurz drastically increased measures to reduce social contact to a bare minimum, in the form of the “Corona Act.”

These unprecedented measures give a glimpse into how Europe will respond to future crises.

With the Corona Act, Kurz has regulated that all businesses that are not absolutely necessary are to be closed. Family celebrations, Sunday church services, weddings, baptisms and other religious celebrations are prohibited. If an individual needs to leave the house, he must explain to police, who are patrolling the streets, why he must leave.

“No bustle in the streets, no crowds of tourists, no crowds in public transport—the curfews of the federal government are now being taken seriously in Vienna,” krone.at noted. “The police are already carrying out controls. ‘Everyone adheres to it,’ said police spokesman Patrick Maierhofer.”

Kurz has hailed his nation as “a pioneer in containing the coronavirus.” According to Die Welt, he said, “Many other European countries are now following us. The Germans are still debating.” Germany has reacted slower to the outbreak. But German Chancellor Angela Merkel has said that such measures as prohibiting public gatherings “have never existed in our country. This is something that is unique, and that we have never had to do in 70 years in the Federal Republic—but have to do now” (Trumpet translation throughout).

While Germany is moving slower, other nations have taken wartime measures.

Prisoner in One’s Own Country

“Starting today, very strict laws apply in Austria,” an Austrian citizen wrote the Trumpet on March 16. “There is an absolute ban on assemblies and only people who actually live together can be together. You can’t even visit parents or friends if you don’t live in the same house with them. We are currently prisoners in our own country. These quarantine laws are closely monitored by the police.”

Citizens in Austria were prisoners in their own country when ruled by a German dictatorship. An older gentleman told Krone that he is used to these coronavirus measures because of the war. But such measures are unheard of in peacetime. Perhaps, as French President Emmanuel Macron suggested, we are currently in wartime. In an address to French citizens, Macron declared war on the “invisible enemy.” He has even drafted the Army to aid in moving sick individuals.

French President Emmanuel Macron is calling in the army to help move sick people to hospitals and has imposed a lockdown to fight #coronavirus pic.twitter.com/TnzgUylSz6

“What the French president announced, after the sounds of [the French national anthem], in his television address, sounded like a general mobilization,” faz.net noted. “France is at war against an ‘invisible enemy,’ he told his compatriots. Just so no one would miss the message, he repeated the word war six times. … After Macron’s war speech, there was primarily applause. Even the left-wing populist Jean-Luc Mélenchon, who would like to overthrow Macron, spoke of ‘national unity’ and called for solidarity.”

But there is a danger in what is happening in Europe.

When the Unprecedented Becomes Normal

Zeit Online noted on March 16 in “That’s What Autocrats Dream Of”:

Austria has massively restricted the civil liberties due to the coronavirus. This is understandable in this situation, but it is also dangerous. …

Suddenly, measures that autocrats and dictators can only dream of are socially acceptable: curfews, abolition of freedom of assembly—the greatest possible control of public life. These days it is becoming clear that even in very democratic countries like Austria, special situations may require special measures. Decided democratically and communicated well, there may also be restrictions on the rights of freedom that previously seemed unthinkable.

But there is a danger in getting used to the unprecedented. This may cause people to “accept restrictions on liberties sooner than before,” Zeit Online wrote. “That the longing for the proverbial strongman, who will finally take action, will grow stronger. And that the critical view of government action is lost.”

Kurz has not given a date for when the measures in Austria will end. “They are valid for an indefinite period of time, and in a crisis like this—one we have never seen before—that is quite reasonable,” Zeit Online noted. But this “restriction of freedom must not become a normal political instrument—no matter what.”

Zeit Online makes a very good observation. The people of Europe are getting used to strong government action. They comply to dictatorial orders. They trust that their government can save them. It’s not a time for democratic decisions; it’s time for a strongman to act.

Jesus Christ warns that what we are experiencing today is only the “beginning of sorrows” (Matthew 24:8). Far worse crises will plague this world. The Bible also reveals that these crises will lead to 10 kings, or strongmen, rising in Europe.

Revelation 17 prophesies of these 10 kings who will be of one mind and gain power at approximately the same time: “And the ten horns which thou sawest are ten kings, which have received no kingdom as yet; but receive power as kings one hour with the beast. These have one mind, and shall give their power and strength unto the beast” (verses 12-13).

The panic over coronavirus could hasten the rise of these kings and solidify their reign.

The Bible calls these leaders “kings,” not because of royal lineage necessarily, but because they act like kings and are admired for it. The late Herbert W. Armstrong taught that these “kings” will rule as dictators.

Europe flourishes on crises. In the economic crisis, the refugee crisis, and now in this coronavirus crisis, unpopular decisions have had to be made that likely would not have been approved by the majority of the people. But when charismatic leaders step forward and introduce unprecedented measures with reasonable explanations, people are willing to comply.

But as Zeit Online warned, there is a danger in how the Austrian government is handling this crisis. We are witnessing the rise of autocrats in Europe—and a population that is increasingly willing to follow their lead.

Europe hasn’t experienced its last crisis—even once the coronavirus is contained. As we watch Europe in the next few weeks and months, we need to do so in the light of Bible prophecy. In times of great uncertainty, only the Bible’s forecasts can help us see clearly where world events are heading. To learn specifically what is prophesied to happen in Europe, request your free copy of Daniel Unlocks Revelation, by Trumpet editor in chief Gerald Flurry.