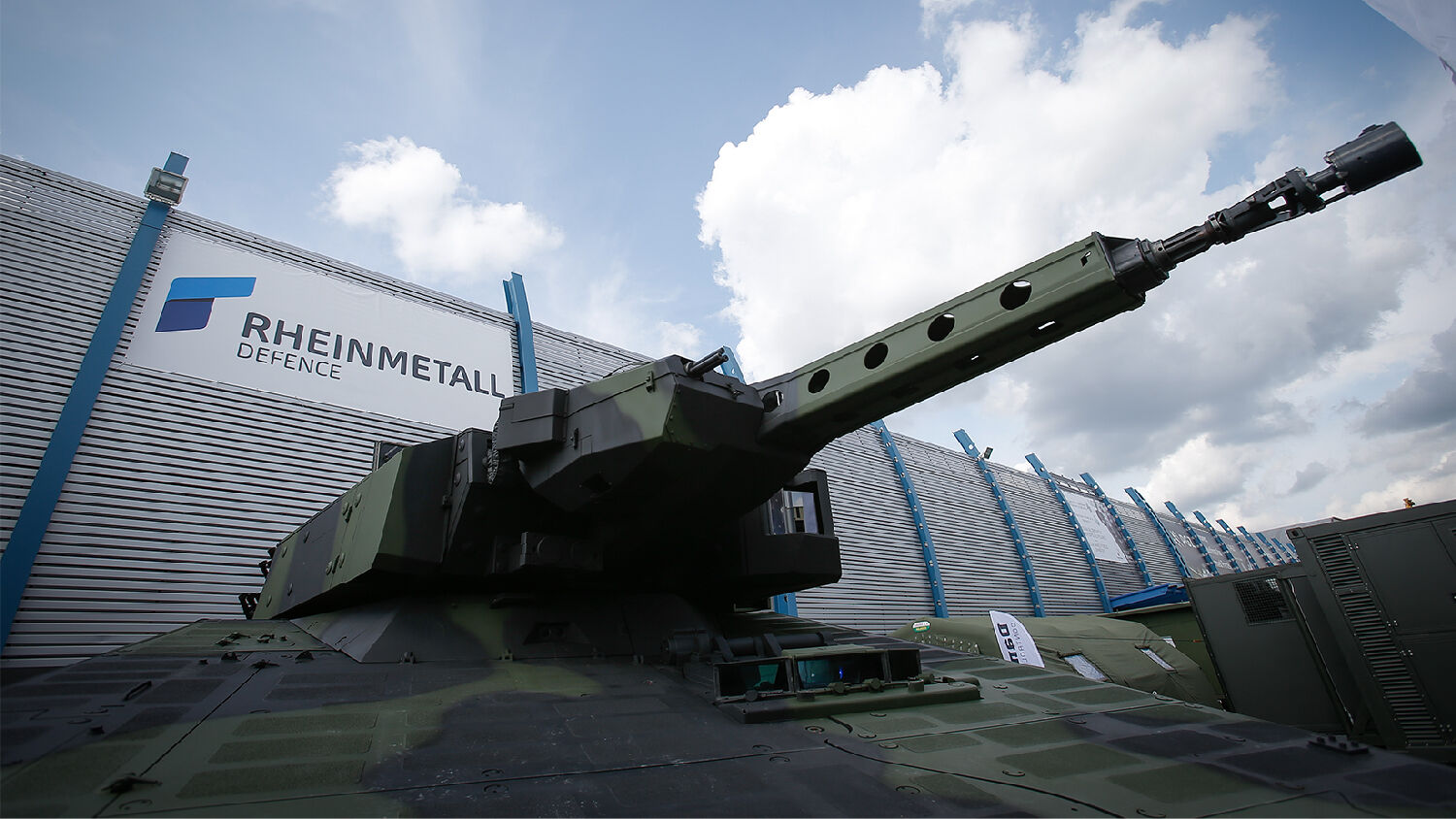 The Rheinmetall logo is seen above the turret of a Boxer vehicle.
Getty Images

Compensating for slumps in the automotive markets, defense earnings are soaring.

Rheinmetall, based in Düsseldorf, Germany, witnessed a stark rise in demands in its armaments division but a decrease in its automotive division in 2019. However, the group’s defense sector compensated for far more than the loss in its automotive sector. Rheinmetall’s significantly higher profitability of armaments gives us an ominous prelude of where our world is heading.

“Rheinmetall has had another record year,” Rheinmetall AG’s chief executive officer, Armin Papperger, noted. In fiscal 2019, sales reached a new high and generated an operating result of over €500 million (us$561 million). The group’s operating free cash flow also increased to over €300 million ($336 million), and its order backlog grew for the first time to nearly €11 billion ($12.3 billion).

“We are also well positioned for the future in key markets,” Papperger continued. “In our role as an international system provider for armed forces, we are benefiting from the supercycle in the defense technology business gifted to us by the pressing backlog in military procurement.”

The supercycle that is causing Rheinmetall to rejoice is causing others great concern. The world is rapidly arming again.

Rheinmetall is benefiting from the massive military upgrades in Germany and other Western nations.

The budget for Germany’s Bundeswehr is rising to $50.6 billion this year—almost 40 percent more than in 2014. In 2020, the combined military budgets of the European states is expected to exceed $300 billion. “Among other things, Rheinmetall benefits from the arming of Arab states against Iran,” German-Foreign-Policy.com noted, “but above all from the arming of the Western world against Russia and China.”

Germany’s economy just barely avoided a recession last year. The uncertainty over Brexit, the trade war between the United States and China, as well as U.S. tariffs and sanctions against Russia and Iran have left Germany’s economy on unstable footing.

Its economy flourished for decades while the world experienced relative peace. But with rising uncertainties around the globe, we can expect Germany’s industrial might to refocus on Europe’s military buildup.

We are now seeing a similar trend.

Today, Germany’s industry is not only in position to fuel the nation’s own military ambitions but also those of all of Europe.

If you combine the strength of its arms industry with its civil industry, “Germany could soon be mass-producing tanks and other military vehicles instead of cars,” we explained in “Forging a Superpower,” from the April 2019 Trumpet issue.

How is it that this same manufacturer is arming Germany again today?

Allied forces met in 1945 in Potsdam, Germany, and resolved that Germany should undergo a “complete disarmament and demilitarization … and the elimination or control of all German industry that could be used for military production.”

British Prime Minister Winston Churchill and U.S. President Franklin Roosevelt said at the time: “It is our inflexible purpose to destroy German militarism and Nazism ….”

There is a reason why these leaders were concerned that Germany would start yet another war.

“In 1996, a shocking World War ii intelligence document was made public,” Trumpet editor in chief Gerald Flurry writes in Germany’s Conquest of the Balkans. “The document, detailing an August 1944 meeting between top German industrialists, reveals a secret postwar plan to restore the Nazis to power.” Rheinmetall was at that meeting. The participating companies at the time pledged to “prepare themselves to finance the Nazi Party, which would be forced to go underground.”

Many of these companies entered the civil industry after World War ii and later reentered the arms industry. “When the U.S. declassified this document,” Mr. Flurry writes, “it received only sparse news coverage. Yet even more disturbing than the deep stupor of the press is the fact that the U.S. government did not make it public until 1996—over 50 years later!”

Today, Rheinmetall is rejoicing that its sales in its defense subsidiary are compensating its losses in the automotive sector. Few realize that the only purpose for its automotive sector was to enable the company to endure times of peace. In a public address given May 9, 1945, during the inaugural session of the United Nations, the late Herbert W. Armstrong warned:

Mr. Armstrong’s forecast was informed by the prophecy in Revelation 17:8: “The beast that thou sawest was, and is not; and shall ascend out of the bottomless pit, and go into perdition: and they that dwell on the earth shall wonder, whose names were not written in the book of life from the foundation of the world, when they behold the beast that was, and is not, and yet is.” Based on this and other Bible prophecies, Mr. Armstrong understood that Germany would eventually dominate Europe and start another world war. While everyone prophesied Germany’s doom in 1945, Mr. Armstrong prophesied about its unparalleled revival.

Now 75 years later, we are witnessing how absolutely accurate his warning was. God revealed these prophecies to Mr. Armstrong decades before their fulfillment for a reason. God, in His mercy, is giving nations and individuals a chance to heed the warning and be spared from the suffering. Sadly, few people today are paying attention to God’s message.

In Who or What Is the Prophetic Beast? Mr. Armstrong gave the explicit details of these prophecies we are seeing come to pass. Mr. Armstrong explained that these prophecies lead to Jesus Christ’s return and the end of all suffering. But before then, mankind has to learn that his ways lead to destruction (Proverbs 14:12). Request a free copy of Who or What Is the Prophetic Beast? and learn this lesson today.