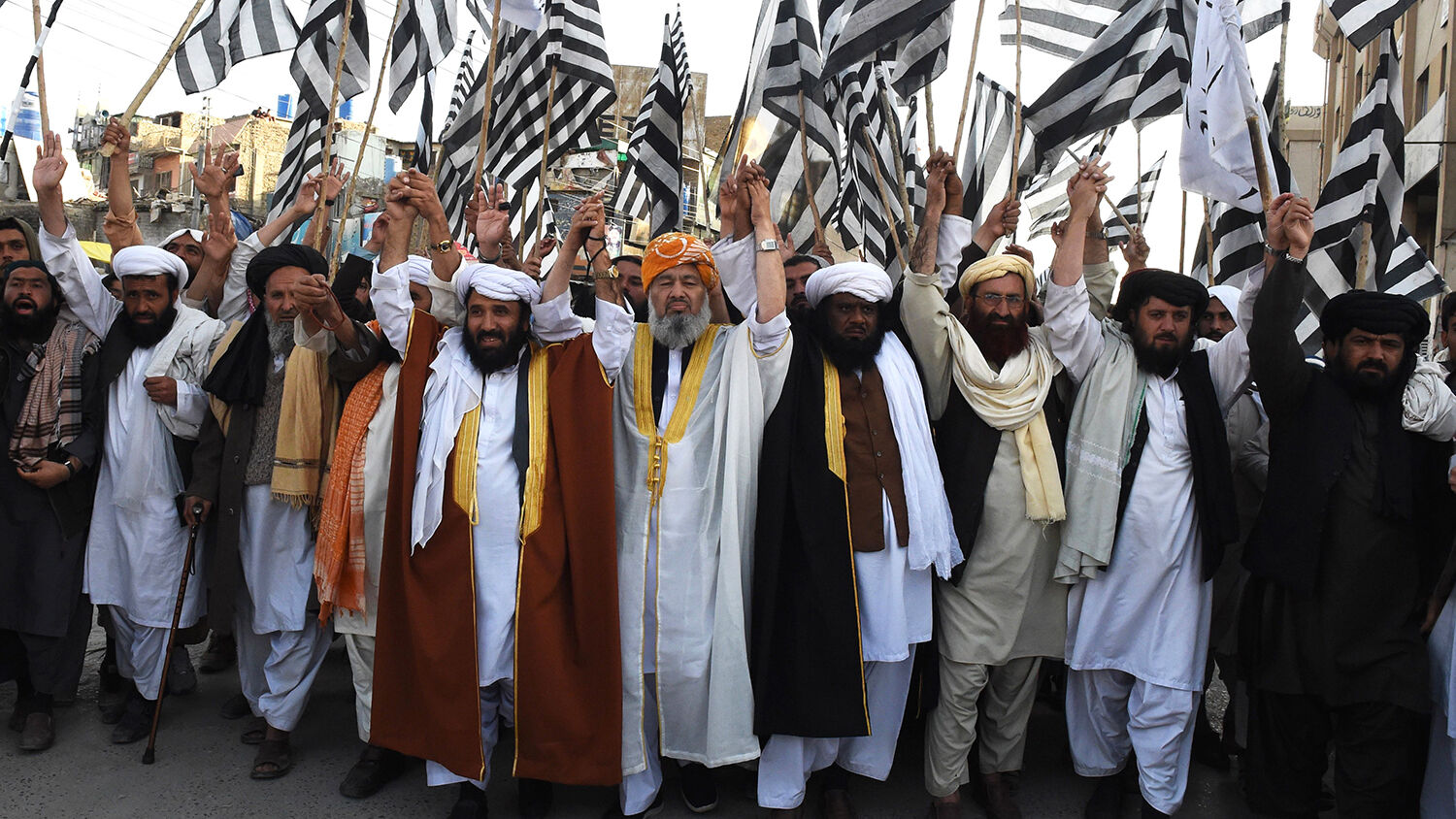 Jamiat Ulema-e Islam Nazryate activists in Quetta celebrate the signing of the agreement between the U.S. and the Taliban on March 1.
BANARAS KHAN/AFP via Getty Images

Half measures, fake peace and a giant in retreat

United States President Donald Trump signed an agreement with the Taliban on Saturday affirming a temporary truce and a full-scale American withdrawal from Afghanistan. After 18 years of war, spending $1 trillion supporting the war effort, and the death of 2,300 American soldiers and more than 150,000 Afghans, America has conceded defeat.

America’s retreat from Afghanistan has been a long-standing Trumpet prediction. In November 2001, when the U.S. first started its war in Afghanistan after the September 11 attacks, we predicted: “The U.S. won’t be the victors in this war. … As we now examine the facts emerging from this war, we can see unequivocally that the terrorist snake will survive America’s aggression—head intact and stronger than ever.”

Now, after America’s negotiated defeat in Afghanistan, this prediction rings louder than ever.

According to the New York Times, the peace deal signed with the Taliban—one of America’s main enemies throughout the 18-year war—affirms that the U.S. will withdraw all of its 12,000 soldiers from Afghanistan within the next 14 months. According to the Associated Press, immediately after the signing, America will reduce its troops to approximately 8,600 over a period of weeks. However, the U.S. will keep warplanes in the country in case the Taliban renews its offensive on the Afghan government, along with a small force to protect its embassy.

What did America receive in this deal? A promise of peace.

The peace deal calls for negotiations between the Taliban and the Afghan government to start next month, which should eventually lead to a nationwide ceasefire—though many experts question whether the two parties would ever agree to share power. The Taliban—guilty of suicide bombings and rocket attacks against Afghan and American troops—also agreed to not harbor terrorist groups, like al Qaeda, within Afghanistan’s borders.

The U.S. negotiated with terrorists and made a deal with the enemy.

The War in Afghanistan quickly became a quagmire for the U.S. As expenses and death rates increased, America increasingly wanted out of the miry mess. Nevertheless, no president was willing to completely withdraw from Afghanistan because each feared underestimating the threat and risking another terrorist attack on American soil. The motivations to stay were largely political. Because of these factors, American presidents have wavered: To stay, or not to stay—that was the question.

As a result, the War in Afghanistan became one defined by half measures.

On Sept. 20, 2001, then U.S. President George W. Bush said that the “leadership of al Qaeda has great influence in Afghanistan and supports the Taliban regime in controlling most of that country.” If not for al Qaeda’s support, the Taliban could not have controlled the government from 1996 to 2001. When American troops quickly ousted it from power and forced it into hiding, the Taliban leadership fled to the Pakistani city of Quetta to regroup. While there, it received financial and military support from the Pakistani government and al Qaeda.

With international help and a quick victory, the U.S. installed a new government in Afghanistan. But in 2006, the Taliban returned from Pakistan in a ferocious comeback. Within a couple of years, Afghanistan was again in turmoil.

Afghanistan’s economy was in shambles. Its insufficient infrastructure, nonexistent industry and poverty-stricken agricultural community led many local Afghans to blame the newly established government. As a result, many joined the Taliban as jihadist insurgents.

America responded with a troop surge in 2009 that peaked in 2011 with just over 100,000 troops in Afghanistan at one time. That year, Osama bin Laden was killed in Operation Neptune Spear. A poll later that year found that the majority of Americans believed the U.S. had accomplished its purpose in Afghanistan. President Barack Obama declared victory and ordered a mass withdrawal of troops from Afghanistan. Troop numbers plummeted to about 8,400 in 2016.

“Power players all over the Middle East were watching carefully as America … showed a will to fight, and then quickly tired of the whole affair,” Vali Naser writes in The Dispensable Nation. “Our only goal seemed to be getting out, first of Afghanistan and then the whole region.”

The number one enemy in America’s eyes was gone, and ever since, the U.S. has been begging for peace. The American people have simply lost the will to continue; they want out of Afghanistan. However, terrorism still runs rampant in the desert nation and the real head of the snake remains “intact, and stronger than ever.”

Head of the Snake

In his November 2001 Trumpet article “The Head of the Snake,” Trumpet managing editor Joel Hilliker wrote:

While the U.S. wants to eliminate terrorism and is becoming much more aggressive in trying to do so, its efforts will fall short. …

[T]he Taliban is just one tendril of the monster. … The real head of the snake of terrorism is referred to in end-time prophecy as the “king of the south” … likely being a potent Middle Eastern country leading a coalition of nations united by radical Islam.

America claimed that al Qaeda was the power behind the Taliban and the 9/11 bombings; however, recent findings reveal Iran to be the true source of the terrorist power.

In November 2019, the U.S. State Department released a report that drew special attention to the al Qaeda-Iran relationship. It states: “Tehran continued to allow an [al Qaeda] facilitation network to operate in Iran, which sends fighters and money to conflict zones in Afghanistan and Syria, and it has extended sanctuary to [al Qaeda] members residing in the country.”

Later in November, the Central Intelligence Agency declassified a large trove of documents from the 2011 raid (during which bin Laden was killed) detailing how Hamza, bin Laden’s son, was sheltered in Iran. According to the Atlantic, one 19-page document showed how negotiations between al Qaeda and Iran’s Islamic Revolutionary Guard Corps in Tehran discussed the funding and arming of al Qaeda members to strike American targets. Several sources agree that evidence suggests this al Qaeda-Iran relationship even goes back two decades—before the September 11 attacks on the Pentagon and the World Trade Center, which Iran also played a role in planning.

While America was busy pursuing al Qaeda and the Taliban in Afghanistan, the real threat, Iran, was free to continue expanding its military and funding terrorism throughout the Middle East.

We have spent billions [now trillions] of dollars and our young men have given their lives in the Afghanistan war. But Iran is reaping the benefits.

This is what happens when you don’t destroy the “center of world terrorism”—the king of terror.

In 1994, then Secretary of State Warren Christopher called Iran “the world’s most significant state sponsor of terrorism.” Most sources claim that Iran spends $1 billion a year supporting terrorism; others say this number could be as high as $16 billion annually.

Notice Daniel 11:40: “And at the time of the end shall the king of the south push at him: and the king of the north shall come against him like a whirlwind, with chariots, and with horsemen, and with many ships; and he shall enter into the countries, and shall overflow and pass over.”

The Trumpet has identified this king of the north as a united, German-led European Union. Iran will push at this emerging European superpower, and in response, as it says in Daniel 11:40-41, Europe will “come against him like a whirlwind” in a storm of fury and will “overflow” and conquer many countries.

But notice, the United States is not mentioned in this prophecy! In 2001, we wrote that “there will soon come a point when the U.S. won’t even be a factor in this war.” There is a reason why.

On February 26, Al Jazeera wrote, “After Vietnam and Iraq, the U.S. seems to have lost its third major war and the longest of them all.”

Herbert W. Armstrong, founder of the Plain Truth, predecessor of the Trumpet, declared after World War ii that “the United States has won its last war!” The Trumpet has maintained that forecast.

Following in Mr. Armstrong’s footsteps, Mr. Flurry declared that America would not win its war on terrorism. In 2003, he wrote, “If the Iranian leadership were eliminated, the whole course of Mideast history would change radically for the better, because it is the king. Sadly, Bible prophecy reveals that will not happen.”

At the time of America’s invasion of Afghanistan, the U.S. State Department had listed five regimes that sponsor terrorism: Iran, Iraq, North Korea, Sudan and Cuba. Afghanistan was not on the list. America dealt with the effect and ignored the cause.

By fixating on individual terrorist entities, the U.S. has gone after the pawns instead of the king. As a result, America’s strength has been spent in vain. This catastrophic failure of American policy was prophesied with remarkable accuracy in your Bible.

Leviticus 26:19-20 say, “And I will break the pride of your power; and I will make your heaven as iron, and your earth as brass: And your strength shall be spent in vain.” Because of disobedience, God said He would curse the modern descendants of Israel, primarily Britain and the U.S. (For proof about the identity of these nations, request a free copy of The United States and Britain in Prophecy, by Herbert W. Armstrong.)

According to this prophecy, America would still have its mighty military, but it would lack the will to use it.

Mr. Flurry continued: “Little Israel has more military might than Iran but fears to use it. The same is the case with Britain. And certainly that is true of America. But our nations fear to use their power—because of our sins. The ‘pride of [our] power’ has been broken! We simply lack the will to sustain our war against terrorism” (op cit).

The Afghanistan Papers, a confidential trove of more than 2,000 pages of government documents, revealed on Dec. 9, 2019, show the extent of America’s divided approach and its failure to go after the real threat. The reports revealed U.S. Army generals saying, “We were devoid of a fundamental understanding of Afghanistan—we didn’t know what we were doing. We didn’t have the foggiest notion of what we were undertaking.”

One of the generals said that as a result of U.S. bureaucratic “dysfunction” in Afghanistan, thousands of Americans lost their lives “in vain.” Since 2001, more than 775,000 U.S. troops have been deployed to Afghanistan. According to U.S. Defense Department figures, 2,300 died and 20,589 were wounded in action. In the same period, the U.S. spent nearly $1 trillion, according to inflation-adjusted estimates.

All of the effort, money and manpower the U.S. has expended in its 18-year war in Afghanistan has been “in vain” and has only led to America negotiating its own defeat. The pride of our power has been broken.

Our ultimate success will be determined by our relationship with God. If God is for us, we can’t lose. But if God is against us, we can’t win. And Bible prophecy relates that God is against us and is cursing us. We should repent and become a true superpower! … But even if we don’t change our evil ways, this is all leading directly to the return of Jesus Christ. That is the best possible news this world could ever hear! This evil world of terrorism and war is about to end forever. It will soon be replaced by a world full of prosperity and peace.

For more information about this prophecy, request a free copy of The United States and Britain in Prophecy.