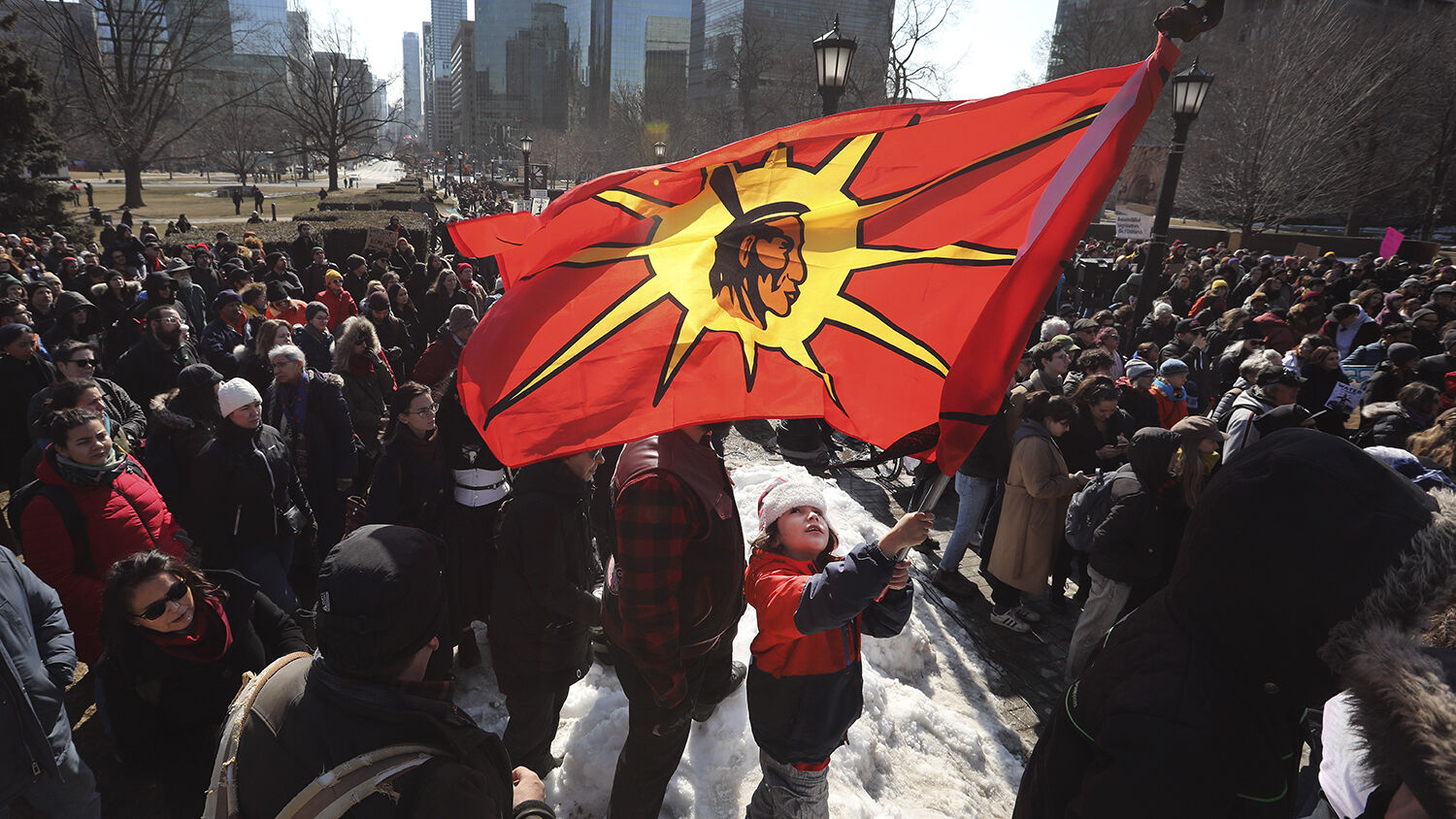 Thousands take to the streets in Toronto, Ontario, on February 22 in support of the pipeline protesters in British Columbia.
Richard Lautens/Toronto Star via Getty Images

The anarchy that recently swept through Canada is going to get worse.

Two weeks of protests and illegal blockades to roads and rail lines began on February 6, disrupting transport across Canada and causing heavy losses for industries and farmers. By the time it was over, a relatively small group of people had paralyzed key transport links and brought major sectors of the Canadian economy to near-crisis levels of supply shortages.

It began when a small aboriginal tribe in British Columbia opposed construction of a liquid natural gas pipeline that would cut across their land, claiming they had never ceded the territory to the government.

As talks with the tribe collapsed and the story spread, so did a wave of protests. Most were radical climate activists who took advantage of the situation to voice anti-capitalist views or to hit back at the government for perceived injustices.

Protesters set up encampments, blocking roads and rail lines throughout the country. Anarchists illegally placed debris and started fires on the tracks, putting trains at risk of derailing. Many of these trains carry crude oil, and ironically, a derailment would have caused an environmental disaster.

Protesters succeeded in blocking rail traffic around the capital, Ottawa, as well as a major rail corridor between Toronto and Montreal. They marched through the streets of major cities, blocking intersections.

In the west, British Columbia and Manitoba experienced severe disruptions to rail transport. A freight line serving the Port of Prince Rupert was forced to cancel hundreds of trains, effectively shutting down the entire port. This delayed the shipment of lumber, coal, aluminum, wheat and other vital products.

Canadian National railways said in a press release that “factories and mines will be soon faced with very difficult decisions” due to the supply chain falling apart. They noted that the ports of Montreal and Halifax, both essential to the nation’s supply chain in the east, were “feeling the impact” of blockades as well. Consumers, they warned, would soon be affected too.

One week into the protests, the nation’s main rail freight carrier announced suspension of all services in eastern Canada. Various rail companies handed temporary layoffs to over 1,000 employees. More than 400 trains were canceled.

By the time police had cleared most disruptions, lasting damage had already been done. “A return to full operating capacity will take longer than most people realize—months probably rather than weeks,” wrote the Financial Post. During the protests, around $425 million in manufactured goods were sitting idle in trains, estimated the ceo of business advisory company Canadian Manufacturers and Exporters. Economists estimate that economic growth will be reduced by at least 0.3 percent in the first quarter of 2020—a notable dip, which will certainly be felt in Canadian industries.

Another hit to the economy came on February 23, when a major oil company canceled a project that could have created thousands of jobs and generated $52 billion in revenue for the government. Its leaders blamed many factors, but most see their decision as a result of the blockades. This tells the world that Canada is not a stable place to do business.

Not only has the economy suffered, but so has trust in the nation’s leadership.

In the eyes of many, Canadian Prime Minister Justin Trudeau failed to enforce the law when it meant confronting the climate activists. Throughout the situation, a majority felt he provided little leadership at all.

A poll by National Post showed that 64 percent of Canadians do not support their prime minister, 63 percent believe he handled the crisis incorrectly, and 59 percent believe the country is generally headed in the “wrong direction.” Forty-nine percent want a federal election immediately.

When asked if they agreed with the statement, “Right now, Canada is broken,” 69 percent said yes. But for those in Alberta, a province reliant on oil production and a favorite target for environmental protesters, 83 percent said yes.

It did not help that Trudeau was out of the country when the unrest began, adding to the perception that he was never in control of the situation to begin with.

Canada’s government is becoming more and more unpopular. Canadians admit that it is broken.

The Bible gives an apt description of Canada’s current situation. “Why should ye be stricken any more? ye will revolt more and more: the whole head is sick, and the whole heart faint. From the sole of the foot even unto the head there is no soundness in it; but wounds, and bruises, and putrifying sores: they have not been closed, neither bound up, neither mollified with ointment” (Isaiah 1:5-6).

This is a picture of rioting and violence coming to the cities of Canada, Britain and the United States.

This describes a society where the leaders are too weak to deal with their long-standing problems. They fail to stand up for the law, allowing lawless behavior to go unpunished. As a result, it only gets worse. They have no solutions to the problems besetting their country. Today, Canada finds itself in exactly this situation.

Ultimately, violence is prophesied to increase. “Your country is desolate, your cities are burned with fire: your land, strangers devour it in your presence, and it is desolate, as overthrown by strangers” (verse 7).

What is the solution?

The United States and Britain in Prophecy, by Herbert W. Armstrong, explains that these prophecies are aimed at the modern descendants of Israel. Today, that is referring to Britain, including the Commonwealth nations, and the United States.

When followed, God’s law brings peace. “To Adam God revealed the way of life that would result in everything man desires: peace, enjoyable life, happiness, abundant well-being,” wrote Mr. Armstrong. “To produce these blessings—to be the cause of such desired effect—God had set in motion His inexorable spiritual law.” However, Adam rejected that law, and the entire world has followed after that pattern.

Canada, like the U.S. and Britain, is abandoning God’s law. This will lead to greater violence in the future. What the country has recently experienced is only a small foretaste of the violent anarchy and economic collapse the Bible warns about. The only way to escape is to turn to God’s law and come under His government.

To begin studying this life-saving truth today, order your free copy of The United States and Britain in Prophecy.