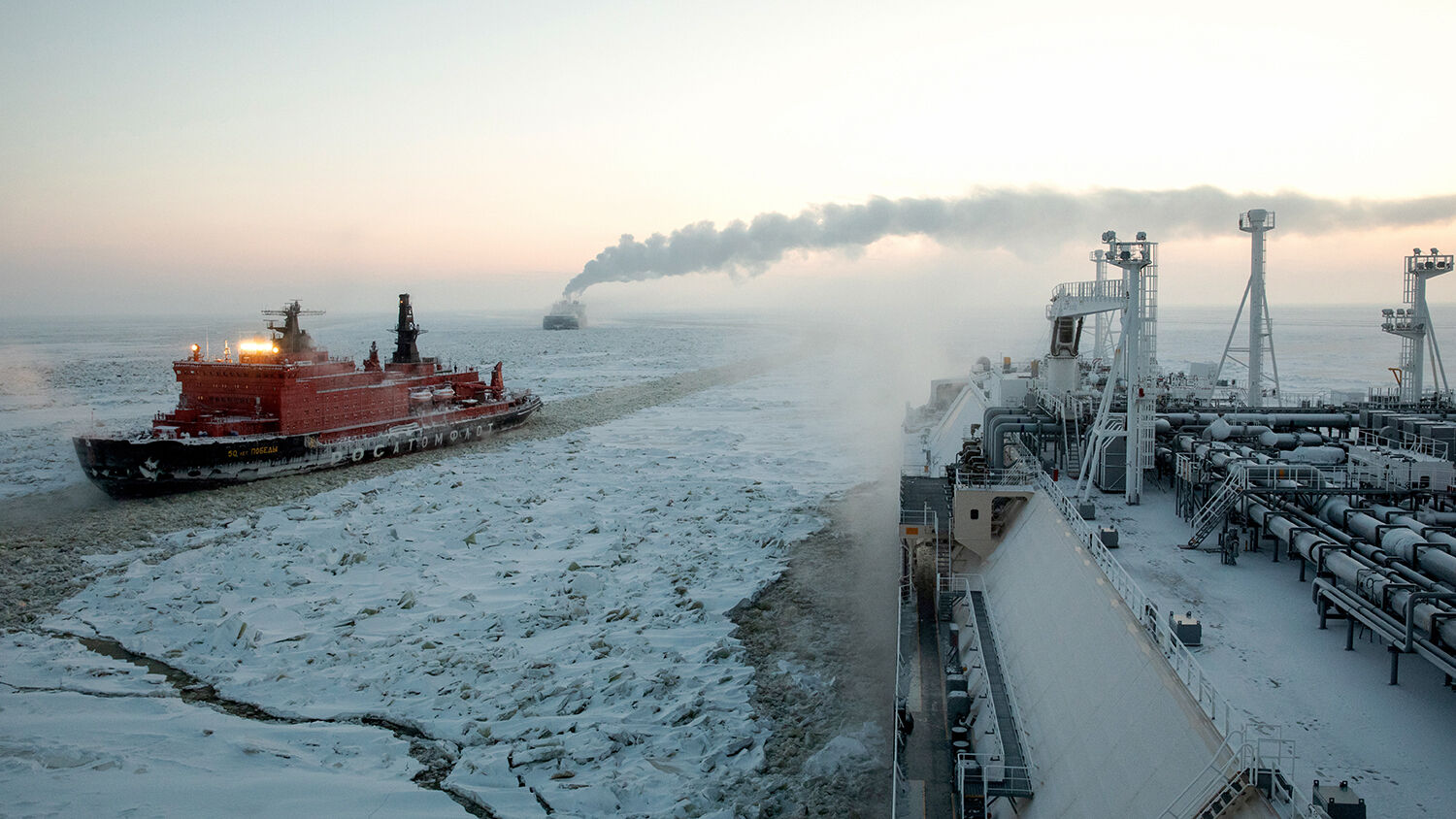 The 50 Let Pobedy nuclear-powered icebreaker makes its way through the frozen waters of the Gulf of Ob, the Kara Sea.
Alexander Ryumin\TASS via Getty Images

A new set of policies will make Russia more mobile, capable and powerful in the increasingly important region.

As global attention is captivated by the outbreak and spread of the Wuhan coronavirus, the Russian government has quietly put plans in place for the Arctic that will dramatically boost its dominance over the increasingly important region.

Throughout most of modern history, the Arctic has experienced comparatively little of the geopolitical wrangling between nations that has defined more accessible global regions. But in recent decades, technological advancement and thawing ice have brought the region more openly into play for the countries with territory there: Canada, Denmark (Greenland), Finland, Iceland, Norway, Russia, Sweden and the United States.

Even before the new plans, Russia had emerged as the clear leader of the Arctic pack. In recent years, it used its unrivaled fleet of icebreaker ships to revamp Soviet-era airstrips, radar facilities and other military installations at various Arctic locations. The Russians also constructed new air bases, deployed anti-ship and ground-to-air missile systems, established four new Arctic brigade command units, and opened 16 ports. In 2017, Mikhail Barabanov, editor in chief of Moscow Defense Brief, told Reuters that the construction and modernization efforts were taking place at an “unprecedented pace not seen even in Soviet times.”

But those years of “unprecedented” development were still not enough. Now government officials have ratified new policy decrees that break open a path for Russia to construct still more infrastructure, launch a constellation of new satellites to help Russia survey and control the region, and build still more Arctic vessels, including heavily armed “military icebreakers.”

The new 84-point plan calls for these and a wide range of related activities. It is all designed to enable Russia to tap more deeply and broadly into the Arctic’s vast caches of natural resources, improve transportation through the Northern Sea Route, and build a military presence capable of blocking out other powers.

Black Gold in the Ice

During a recent visit to the Arctic, Russian President Vladimir Putin said, “Natural resources, which are of paramount importance for the Russian economy, are concentrated in this region.”

The U.S. Geological Survey agrees with his assessment, estimating that the Arctic holds 30 percent of the world’s undiscovered natural gas and 13 percent of oil. It is also known to contain copious quantities of gold, platinum and zinc. Putin said current estimates put the total value of the Arctic’s untapped resources at $30 trillion.

That’s 20 times larger than the current gross domestic product for all of Russia. So it isn’t difficult to see why Putin is increasingly determined to overcome any ice, cold, distance and geopolitical competition standing between Russia and these resources.

In addition to exploiting the Arctic’s resources, Russia is also resolute about improving its options for shipping them out of the region to buyers around the world.

The Northern Sea Route, running along Russia’s Arctic coast from the Kara Sea to the Bering Sea and then down into the Pacific Ocean, is the main focus of these efforts. Through this route, Russia can ship Arctic gas and oil to energy-thirsty Eastern countries weeks faster than the time needed to ship it westward around Europe and through the Suez Canal. In the case of China, the thirstiest country of all, the Northern Sea Route slashes shipment durations by some 15 days.

Russia has already been focused on making major improvements to the route: In 2013, just 3.9 million tons of cargo passed through it. By last year, the combination of thawing ice and Russia’s increasing development of the route had boosted that volume to 26 million tons.

If Russia’s operation of the Northern Sea Route were done in accordance with international law, it would be a boon to the global economy. But in March 2019, Russia announced a set of disquieting requirements for any foreign vessels transiting the route: They must request passage from Moscow 45 days in advance, bring a Russian maritime pilot aboard for the crossing, and pay exorbitant transit fees. Any ship that fails to obey can be apprehended and even “destroyed,” the Russian government said. And even if a foreign ship follows all the requirements, Russian officials say they can reject any transit request without explanation.

The troubling—and unlawful—aspect of these rules concerns the Bering Strait, which lies between Russia and the United States. The United Nations Convention on the Law of the Sea (unclos) stipulates that waters within 200 nautical miles from a given country’s coast constitute that nation’s exclusive economic zone (eez), and that the nation has control over them. But international straits such as the Bering are expressly excepted from eez practices. The unclos guarantees freedom of navigation for all.

But Russia asserts that all of the Northern Sea Route, including the Bering Strait, is subject to its regulations. Due to this unlawful policy, U.S. Coast Guard Cmdr. Sean Fahey recently warned that “the rights and freedoms all states enjoy to operate ships and aircraft in the maritime domain” might soon become “the most important strategic issue” in the Arctic.

And because of Russia’s ever increasing number of icebreaker vessels, military bases and other installations, it may soon be able to enforce its regulations for the entire Northern Sea Route even if other Arctic countries dispute their lawfulness. We should expect Russia’s control over the Northern Sea Route and the entire region to only get tighter.

After the collapse of the Soviet Union in 1991, Russia floundered through the next decade humiliated and with its sails in tatters. It washed out of the mainstream of international affairs, and many in the West ignored it. Then in 2000, Putin came to power and started righting the ship and altering its course.

In August 2008, he stunned the world by invading the former Soviet nation of Georgia and bringing much of its recognized territory under de facto Russian control.

That October, Trumpet editor in chief Gerald Flurry wrote about what the move indicated for the future: “Russia’s attack on Georgia in August marks the beginning of a dangerous new era in history. This was the first military strike of a rising Asian superpower—and there will be more! … We have witnessed the beginning of a new era!”

Mr. Flurry then named which other former Soviet nation Russia might attack next: “Will a crisis occur over Ukraine? That area is the breadbasket of Russia, and surely it is willing to wage war over that as well.” Time proved that forecast accurate, with Russia’s 2014 invasion and annexation of Ukraine’s Crimean Peninsula and destabilization of Ukraine’s eastern regions.

Since then, Putin has continued wielding his might to prevent Georgia, Ukraine and other former Soviet countries from developing closer relations with Europe. He made Russia a major power in the Middle East, where it has undermined U.S. influence, helped the Syrian dictatorial regime stay afloat, and enabled Iran to keep pursuing nuclear arms. Putin has also transformed Russia’s military into a dramatically more modern and deadly force, including his militarization and control over the Arctic.

Putin is clearly reviving Russia’s power and lifting its international relevance back toward Soviet levels. And as Mr. Flurry wrote, mankind is now in a “dangerous new era.”

Bible prophecy states that in the near future, Putin will steer Russia into a still more belligerent direction. In his booklet The Prophesied ‘Prince of Russia,’ Mr. Flurry explains that Putin is personally mentioned in Bible prophecies in Ezekiel 38 and 39. “We need to watch Vladimir Putin closely,” he writes. “I believe he is almost certain to be the ‘prince of Rosh’ whom God inspired Ezekiel to write about 2,500 years ago!”

Putin’s rule shows that “[w]e are entering into the worst crisis ever in man’s history,” he writes, but adds that trends now underway in Russia are “super-inspiring at the same time.”

The rise of Putin’s Russia, including its tightening grip over the Arctic, shows that World War iii is close. That is a reality that should sober each one of us. But today’s developments are also closely tied to the most joyous news imaginable: Jesus Christ will soon return and usher in an epoch of unprecedented peace, harmony and abundance for the whole world. To understand more about this beautiful future and why it is vital to watch Putin in the lead up to it, order your free copy of The Prophesied ‘Prince of Russia.’