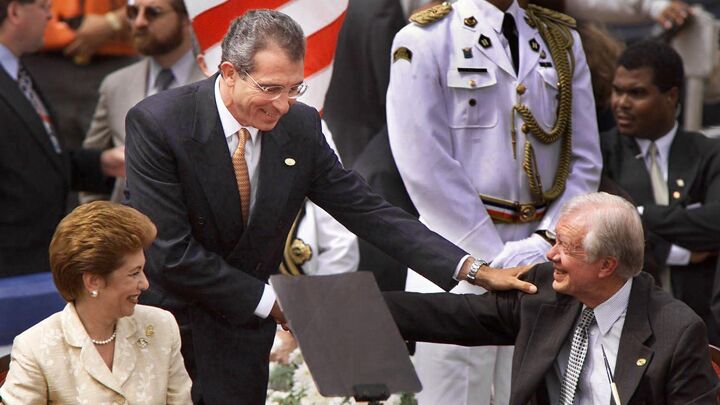 Here is an amazing quote from Time magazine, December 27, 1999, by Charles Krauthammer: “Last week’s handover of the Panama Canal neatly brackets the American Century. It begins with Theodore Roosevelt conceiving the canal and, with it, America ascending to the rank of Great Power. It ends with America so great a power, so serenely dominant in the world, that it can give away T.R.’s strategic jewel with hardly a notice.”

He went on to say that “America bestrides the world like a colossus.” But he is only looking at the surface. This has been the great curse of history.

Theodore Roosevelt was the first U.S. president to see that America should be a world power. His thinking had a great deal to do with achieving that goal. He was no longer content for America to be a colony of Europe.

However, Mr. Roosevelt knew there was more to being a superpower than just having power.”Diplomacy is utterly useless when there is no force behind it,” he said. “The diplomat is the servant, not the master, of the soldier. There are higher things in this life than the soft and easy enjoyment of material comfort. It is through strife, or the readiness for strife, that a nation must win greatness” (emphasis mine).

I believe no American president could have led us to be a world power as Teddy Roosevelt did. He had the will to be great. He also convinced the American people that they should have the will to follow. For a nation to be great, it must have a great leader. Everything revolves around a strong leader who will lead the people to face the necessary sacrifices and hard truths.

Today our people want to hear “smooth things” and “deceits.” It’s the only way a leader can get elected.

Lesser presidents than Theodore Roosevelt can sustain a great nation. But you still must have a leader with the will to remain great.

Where do you find a great leader like Theodore Roosevelt today? If you study his political philosophy, it would be obvious he could not even be elected today. Edmund Morris wrote The Rise of Theodore Roosevelt. It’s a very stirring biography if you want to comprehend Roosevelt’s political views.

Mr. Roosevelt’s fruits were great. “By their fruits you shall know them” (Matt. 7:20). He, more than any other man, led America to greatness.

Weak leadership today has led America to have great power, but we lack the will to really use it.

Mr. Roosevelt realized that there must be a strong will behind that power. It must come primarily from a strong-willed leader. Because of our weak will today, we have again become like a colony of Europe.

Consider this. On the surface we looked like a superpower in our recent battle against Yugoslavia—a strong ally of ours in World War II. But in reality we acted like a colony of Europe—specifically Germany.

Germany started the civil war in Yugoslavia by recognizing the independence of Croatia and Slovenia. That view was quickly followed up by the Vatican. America and virtually the whole world was against their doing so. But they all caved in to Germany’s will.

Then it got a lot worse. Germany took the lead in nato’s war against the Serbs, their traditional enemies. We have proven this in several articles. Germany provided most of the willpower in nato’s attack. America meekly followed along like a good colony. And Germany has reaped the fruits of this war—not the U.S. or Britain.

Germany is content to let us act like the superpower—for the time being. They are working hard to gain more power. Since Yugoslavia’s civil war, Europe has created their own 60,000-man army. It’s an ominous beginning.

That same lack of will plagued America in the Persian Gulf War. We like to act like we won that war, but Saddam Hussein was never defeated. That is why he continues to be a serious problem. We lacked the will to offend our Arab allies and finish the war. We also lacked the will to risk our own soldiers’ lives to preserve peace in the world.

America looks good on the surface. But we lead the world in divorce, crime and immorality. We are too engrossed in self to ever have the will to remain a superpower.

It won’t be long before we have to face reality. We are a phony superpower waiting for disaster, if we don’t awaken.

If you would like to know why this is happening, write for our free booklet on The United States and Britain in Prophecy.