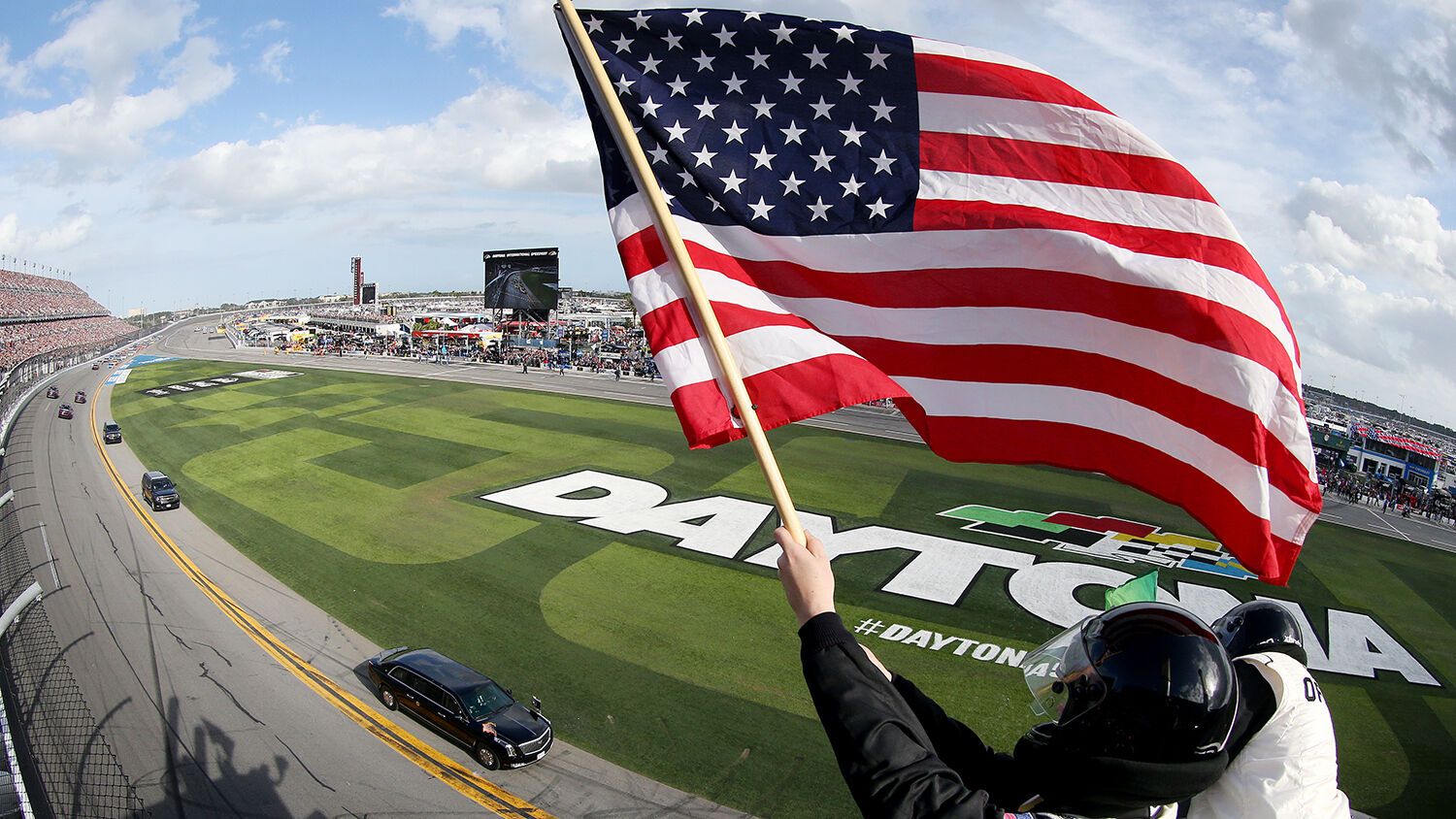 U.S. President Donald Trump and First Lady Melania Trump ride in the presidential limousine on the track prior to the start of the nascar Cup Series 62nd Annual Daytona 500 at Daytona International Speedway on February 16 in Daytona Beach, Florida.
Brian Lawdermilk/Getty Images

On February 16, nascar spectators at Florida’s famous Daytona International Speedway cheered as Air Force One thundered overhead. But the fly-by was just the start. Landing nearby, the president soon entered the stadium in “the beast”—his armored limousine.

Spectators packed the stadium for the Daytona 500—the first race of the season. Aside from the 101,500 spectators, millions more watched from home as the president led proceedings as Grand Marshal of the race.

Speaking to the audience, the president said, “Tens of thousands of patriots here today have come for the fast cars and the world-class motor sports. But nascar fans, never forget that no matter who wins the race, what matters most is God, family and country.”

With the crowd bellowing familiar chants of “U.S.A., U.S.A.” and “Four more years!” the president again took to the beast and led the pace lap. The president even picked up a radio and spoke directly to the drivers and pit crews.

There is no denying it—the event was American grandeur on display. Even for those who live abroad, these moments showcase resurgent America.

The president is basking in a supreme moment of success.

America at large is reaping the fruits of resurgence. As the Daytona 500 testified, there is indeed a surge of pride in America’s power.

This presidency and resurgence is no fluke. It is prophecy fulfilled. Most people give little attention to prophecy, but an entire one third of the Bible is prophecy. And most of that is for the end time. It stands to reason that the world superpower would play a role in those prophecies.

Trumpet editor in chief Gerald Flurry has written a booklet titled Great Again. This booklet proves, from the Bible, how America’s current rise was prophesied by God long ago. Chapter 1 describes a modern-day Jeroboam, an end-time fulfillment of King Jeroboam ii who led ancient Israel into a time of resurgent prosperity (2 Kings 14:26-27). This end-time Jeroboam is described in Amos 7. Donald Trump is is the fulfillment of that Jeroboam. The president is being used to temporarily strengthen America, to restore pride in its power one last time. God has repeatedly warned the descendants of Israel to turn back to Him in repentance. There has been warning after warning. But we have reached the end.

“And the Lord said unto me, Amos, what seest thou? And I said, A plumbline. Then said the Lord, Behold, I will set a plumbline in the midst of my people Israel: I will not again pass by them any more” (Amos 7:8). This is God talking! He is going to give one last warning.

Notice what Mr. Flurry wrote in his article “Who Is the Modern-Day Jeroboam?”:

We are entering the last time God passes by the people of Israel before they are destroyed! This is a time of extreme urgency!

And notice: This is the context of an end-time Jeroboam. Verse 9 continues: “And the high places of Isaac shall be desolate, and the sanctuaries of Israel shall be laid waste; and I will rise against the house of Jeroboam with the sword.”

When God says, “I will not again pass by them any more,” He is talking about not passing by them in the time of Jeroboam.

It is exciting to see the president flex his political muscle. But it shouldn’t distract from the crippling moral decay in America. Despite the current rise, God warns that there will be a reckoning for the sins of Israel.

Amos “warned the people that the supreme moment of their success was but the prelude to their doom” (Soncino commentary). … Conditions in America may improve for a short time. It may even help the work of God. But its ultimate end is destruction. Our people are going to face the wrath of God until they repent!

The star-spangled grandeur of the nascar event shows a nation in the supreme moment of success. Indeed, there may well be more of the same in the coming days. But as time goes on, we must not be lulled into a false sense of security. Individually and nationally, God is calling on us to turn back to Him in repentance.

The nations of Israel are in a state of extreme spiritual, political, social and moral decay. God wants to save you out of that, and out of the punishment that is soon coming.

If you haven’t already, be sure to request and read Mr. Flurry’s free booklet Great Again. There is an amazing future coming for America and the whole world. Under the rule of Jesus Christ, temporary resurgence and temporary punishment will be replaced. We will have permanent peace, joy and happiness. The world will be educated in God’s ways and will be blessed for its obedience.