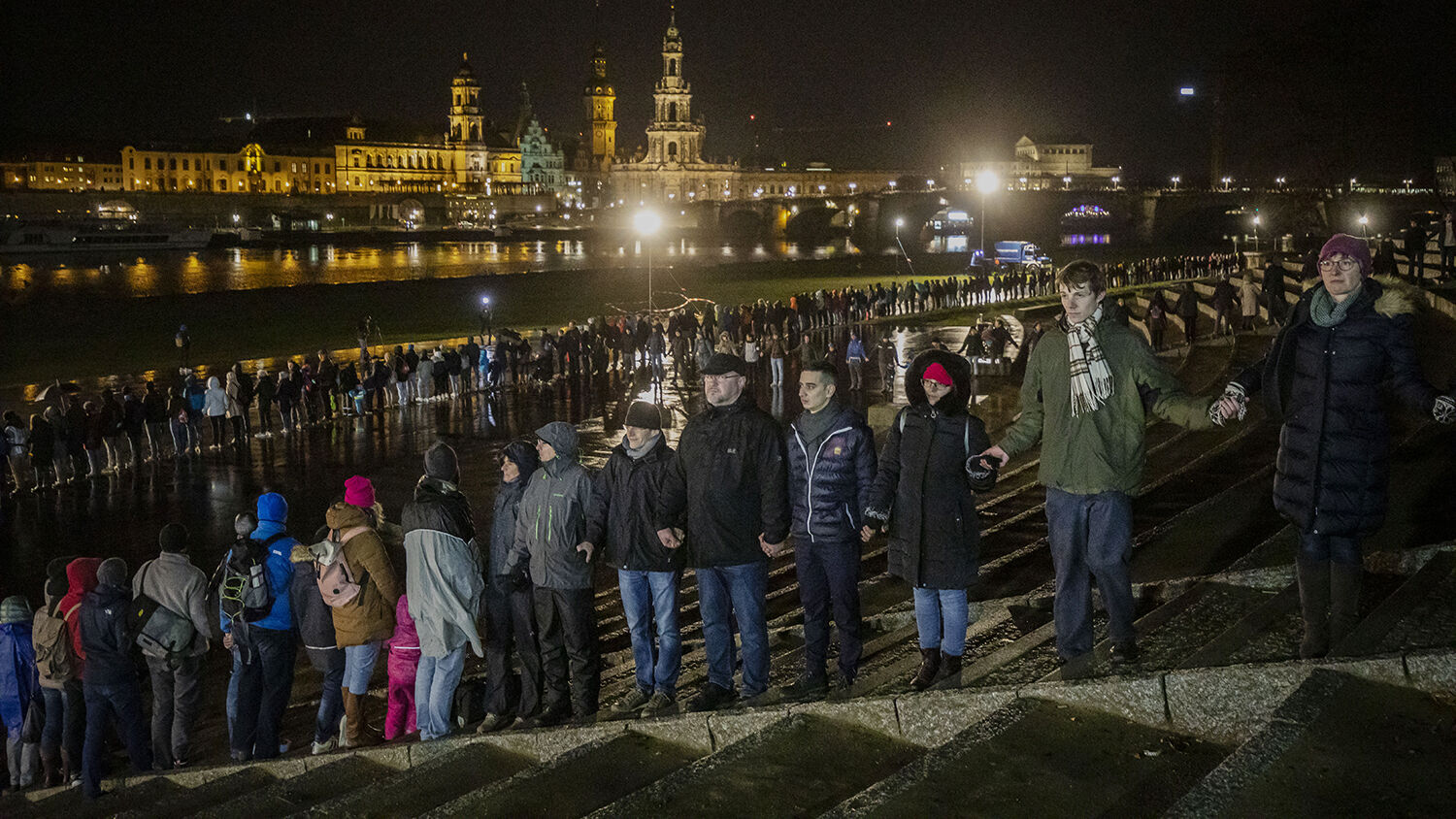 People standing along the Elbe River across from the historic Dresden city center on February 13 link hands to create a human chain in commemoration of the 75th anniversary of the Allied bombing of Dresden.
Gabriel Kuchta/Getty Images

Seventy-five years after the bombing of Dresden is not too late to learn from history.

Dresden has long been a magnet for neo-Nazis. The commemoration of the 75th anniversary of Dresden’s destruction was no exception. Between February 13 and 15, thousands gathered in the city to commemorate the victims and the consequences of World War ii.

British and American bombers killed around 25,000 people during the Dresden bombing in 1945. The raids left the historic city in rubble. Right-wing extremist groups today use the anniversary to mobilize marches “to turn guilt to innocence,” as the Local noted.

On the anniversary, German President Frank-Walter Steinmeier commemorated the victims of the bombing and “the suffering that Germans inflicted on others.”

“We, as democrats,” he said, “must stand up to those who offset the dead of Dresden with the dead of Auschwitz, who try to downplay German injustice, and who falsify historical facts against better judgement.”

For all of Germany, remembering the Dresden bombing is emotional. It can be easy for most to forget that many Germans also suffered during World War ii—however, Germans haven’t forgotten. Some use that suffering for their propaganda today.

In 1945, the Nazi regime tried to use the bombing to stir hatred against the Allied powers and motivate the German people to continue their fight. To do so, they tweaked the number of victims by nearly 175,000. “In March 1945, the Federal Foreign Office instructed German embassies in neutral countries to report casualties of up to 200,000,” the Commission’s report states. To this day, some Germans believe that number to be accurate.

Even if 200,000 died in the raids, how can that compare to the 6 million Jews Germany exterminated or the 60 million who died due to German aggression?

Some claim that Dresden was attacked in February 1945 to destroy Germany’s identity, due to the city’s importance. For right-wing extremists and even some ordinary citizens, the Dresden bombing was an unfair retaliation by the Allies. They bemoan the victims of the raids and the loss of the city’s history more than all the crimes that Germany committed in the war.

Party chief of the far-right Alternative für Deutschland (AfD) in Thuringia, Björn Höcke, is a chief proponent of this revisionist history. In 2017, Höcke said in a speech in Dresden:

The bombing of Dresden was a war crime. It is comparable to the atomic bombs dropped on Hiroshima and Nagasaki. With the bombing of Dresden and the other German cities, they wanted nothing more than to rob us of our collective identity. They wanted to destroy us with root and branch; they wanted to clear our roots. And this has almost been achieved together with the systematic reeducation that began after 1945. There were no longer any German victims, only German perpetrators. To date, we have been unable to mourn for our own victims.

Höcke described counter-demonstrators against pegida (Patriotic Europeans Against the Islamization of the West) and the AfD as “victims of the German educational catastrophe and the Saxon state government.”

For this and more reasons, President Steinmeier strongly warned against the resurgence of right-wing extremism, anti-Semitism and nationalism. “I fear that these dangers have not yet been averted,” he said. But can his warning put an end to this trend?

How is it that Jews don’t feel safe in Germany in 2020 and that hostilities toward Britain and America are growing again? Right- and left-wing extremist parties are again winning majorities throughout German state elections. The parallels to the 1930s are breathtaking. But how can you prevent them?

Germany has seen the horrors of war more than other countries. “We don’t forget,” Steinmeier emphasized. “It was Germans who started this gruesome war and there were millions of Germans who waged it—not all, but many out of conviction.”

Germans caused the darkest hour in human history. They saw firsthand what the human heart is capable of. The Bible warns: “The heart is deceitful above all things, and desperately wicked: who can know it?”(Jeremiah 17:9).

Despite great efforts by individuals, the world has absolutely failed to learn from history. Few people know that only true repentance prevents a person from repeating past mistakes and enables him to find peace. This applies to nations and individuals. Yet no one can come to such repentance without God’s guidance (Romans 2:4).

Germany has had, and still has, the opportunity to repent, as Trumpet editor in chief Gerald Flurry explains in Nahum: An End-Time Prophecy for Germany. True repentance means converting from one’s own ways and following God. Germany’s ancestors once did this for a short time (Jonah 3:5-10), as Mr. Flurry explains. That makes Germany unique.

Because mankind has failed to learn from history and failed to heed God’s warning, we are again heading toward a nuclear disaster. The Bible also reveals that unless Germany truly repents of its evil, it will start an even more catastrophic war—World War iii.

“Germany is going to trigger a nuclear war that would destroy all life from this planet if Christ did not intervene,” Mr. Flurry writes. “No scholarly denial will change that future! God’s true Church must deliver the warning of this coming holocaust. It is the only hope to bring some to repentance to escape this nuclear catastrophe.”

True repentance can change the fate of both nations and individuals. Our free booklet Repentance Toward God, by Gerald Flurry, will guide you through this study if you want to learn more about it. Without God, no country, no individual, can learn from the past and find true peace. But that is the future God wants for all of us.