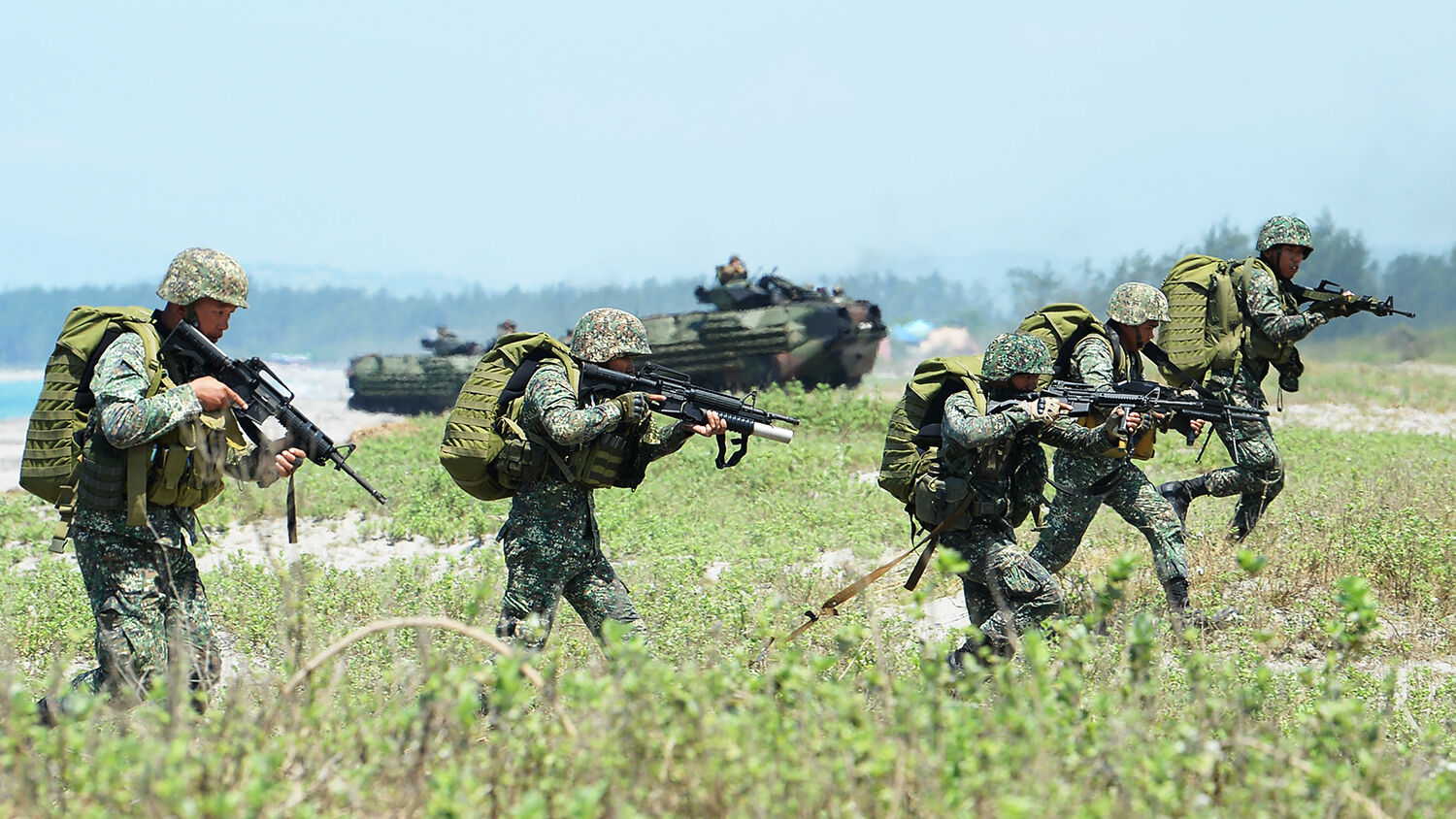 Philippine marines take position next to U.S. marines Amphibious Assault Vehicles during an amphibious landing exercise at the beach of the Philippine Navy training center on Oct. 6, 2018.
TED ALJIBE/AFP via Getty Images

Philippine President Rodrigo Duterte announced on February 11 that he will terminate the Visiting Forces Agreement (vfa) when it expires in six months. This will nullify the pact that allows the United States to conduct military drills and training with Philippine forces on Philippine soil.

Duterte’s foreign policy of spurning America will reshape the balance of power in the Pacific.

The American Embassy in Manila declared the decision “a serious step with significant implications for the U.S.-Philippines alliance.” The Philippines is turning away from America and emboldening China’s illegal claims to the South China Sea.

For decades, American forces have been stationed at five bases across the Philippines. One of the largest, Subic Bay naval base, closed in 1993. Air, naval and ground units have all been based in this uniquely pro-American country. They have trained Philippines armed forces and shared technology with them. Duterte is bringing this to an end. Another major military power will fill the resulting void in training and military expertise: China.

This is a major strategic loss for America. Through the Second World War, the Philippines was key to the war in the Pacific. When Japan drove out American forces in 1942, Gen. Douglas MacArthur vowed to return—and he did. Americans liberated the Philippines and, ever since, have been held in high regard by successive governments in Manila.

Duterte has taken a stark departure from this trend.

There is nothing new about his opposition to America’s military presence in the Philippines. In August 2019, he visited China and announced his “separation from the United States” in front of President Xi Jinping and a slew of other Chinese Communist Party leaders. In October 2016, he stated that he wanted U.S. troops to leave the country within two years. Although this has been delayed, Duterte has not given up on the goal.

Duterte’s decision to scrap the vfa is a political slap in the face for the United States. It shows that Duterte’s administration is drifting away from President Donald Trump’s. Though this course is unpopular with many Filipinos, it is likely to happen.

Losing American military support also bodes ill for domestic security. Radical Islamic jihadists on the island of Mindanao besieged the city of Marawi in 2017. The ensuing battle between the Maute jihadist group and government forces left 87 civilians and 1,146 soldiers and militants dead. The U.S. will not be present to guarantee any major uprising will be contained. Philippine armed forces will also be spread more thinly after America departs. This could embolden the terrorists.

Duterte views the U.S. as unreliable. He does not want to bet the safety of his nation on seemingly distant American help. What if America decides the risks are too high to get involved?

As anti-America policy takes root in Manila, watch for the Philippines to drift closer to China.

China is far from the ideal partner. It claims territory in the South China Sea in violation of international law. It harasses Philippine fishing boats, encroaches on Philippines-owned islands, and is building military infrastructure on all the islands it has taken.

America’s withdrawal and Duterte’s anti-America policy play into China’s hands. Where will it lead?

“Now that U.S. military presence in the area has been drastically reduced, China is claiming the entire South China Sea as its own!” Trumpet editor in chief Gerald Flurry wrote in his July 2016 article “China Is Steering the World Toward War.” He continued:

Each year, $5.3 trillion of trade passes through the South China Sea. That is roughly one third of the world’s maritime commerce! Since Japan’s defeat in World War ii, America has protected this vital trade route and brought peace to this part of the world. Now the American military is retreating, and other great powers are coming in to fill the vacuum. …

Duterte has handed China a victory. Bible prophecy shows that China’s empowerment will harm the U.S.

Ezekiel 4 describes an economic siege that will soon come on the U.S. Verse 3 reads,”[S]et thy face against it, and it shall be besieged, and thou shalt lay siege against it. This shall be a sign to the house of Israel.” Mr. Flurry explained that this passage does not refer to the Jews, “but to the modern descendants of Israel, specifically the United States and Britain.” He said that this passage “pictured a siege against the house of Israel.”

Who will instigate this siege? Mr. Flurry writes in his free book Ezekiel: The End-Time Prophet:

As the Philippines moves further from the U.S. and into the Chinese camp, America is losing yet another ally and an important military outpost. China will gain freer access to the South China Sea and greater economic opportunities thanks to Manila’s pro-China stance. This is leading to the fulfillment of a Bible prophecy that will have grave consequences for America.

To read more about how China’s rise is leading to war, read Mr. Flurry’s article “China Is Steering the World Toward War.”