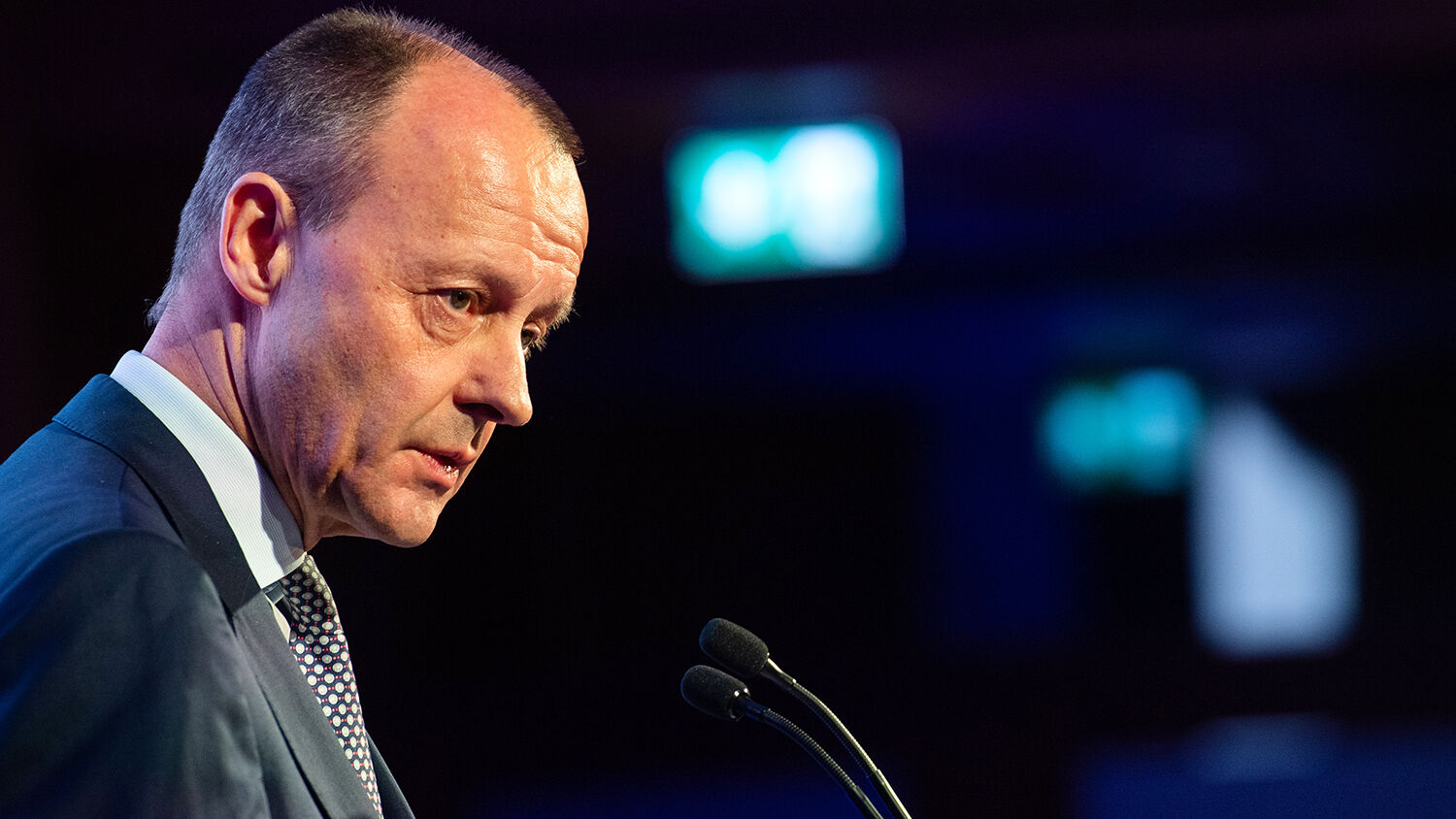 Friedrich Merz is one of the front-runners to become the next party leader of Germany’s Christian Democratic Union (cdu), economics minister or even chancellor. Few know who this man is, but judging by his popularity in Germany, he could soon drastically change the nation’s course.

Merz has the backing of former finance minister and president of the Bundestag, Wolfgang Schäuble, and many other conservative party members. Concerning Germany’s leadership, former Defense Minister Karl-Theodor zu Guttenberg told the German Press Agency on January 17: “For me, there is only one politician in the [Christian Democratic] Union left, who I consider perfectly suitable for this task and who I would vote for: Friedrich Merz.”

cdu party leader Annegret Kramp-Karrenbauer announced her resignation on February 10, giving urgency to the subject of German leadership. The new leader of the cdu will most likely be the party’s chancellor-candidate.

The head of Germany’s government is the most powerful leader in Europe and thus has a major impact on the world. Therefore, we need to ask: Who is Friedrich Merz? And where will he take Germany?

This is not the first time Merz has been considered a possible chancellor-candidate. From 2000 to 2005, he was considered a real contender for the chancellery. However, Angela Merkel won, and he drifted out of politics. Nevertheless, Merz continued to be one of Merkel’s strongest critics.

After leaving politics, Merz went into the business world, becoming a multi-millionaire as a corporate lawyer. Until recently, he worked for an American investment bank.

Ms. Merkel took the cdu to the left—but lost millions of votes to the far right in the process. The rise of the Alternative für Deutschland (AfD) happened under her watch. Its rise in popularity has been so dramatic that almost half of all German political experts expect the AfD to form part of the national government by 2030.

Although Merz hopes to end the AfD’s rise, he actually helped pave its way. In 2005, Deutsche Welle wrote:

Germany was successful in rebuilding its bombed and charred cities after World War ii, but it was less successful in healing the deep wounds German culture and the national psyche suffered after 12 years of Nazi rule.

For decades, the phrase “German pride” was considered an oxymoron, something that had been rubbed out of existence after Auschwitz. But that began to change after reunification, and in 2000, conservative politician Friedrich Merz asked the question publicly: Could Germans be proud of their achievements and should there be common cultural guidelines that people ought to live by? It evoked some angry responses.

Pride in Germany’s history and achievements is a major theme for the far right, but it was Merz who introduced the idea into Germany’s mainstream party.

Many Germans desire a leader who represents some of the same political views of the far right, without appearing like a Nazi. Merz does that in a fabulous way. Foreign Policy wrote last week:

Though Björn Höcke, the leader of the party’s far-right splinter group, is often presented as a charismatic strongman, he remains divisive even within the AfD and is almost entirely despised outside of it.

Instead, it is ostensibly centrist leaders like Merz who present the greatest threat. That Germans would consider voting for a far-right leader should hardly surprise close observers of the country’s politics—an undercurrent of right-wing radicalism has always infected German politics, including in the cdu. Indeed, there are many figures in the party who may be to the right of Merz: Interior Minister Horst Seehofer, for example, or Hans-Georg Maaßen, the former head of the Federal Office for the Protection of the Constitution, Germany’s internal security agency. Furthermore, a number of long-term sociological investigations have found widespread support for right-wing radicalism within the German populace. That a centrist party like the cdu might be led by a politician making nativist claims and praising his own business acumen can hardly be seen as unprecedented, either within Germany or in the midst of a global shift to the right.

If Merz wins the race to succeed Angela Merkel, we can expect a sudden change to the right and quick end to Merkel’s legacy.

One of Germany’s greatest fears is an economic recession. Last year, the nation saw the most financial uncertainty since the financial crisis of 2008. Recent trade disputes and the challenge to adapt to new technologies are burdening its economic output. Thus “Merkel’s Successor Must Confront Germany’s Decline,” as the Financial Times noted.

Here again, people are putting their hope in Friedrich Merz.

During his time as a politician, he became famous for his pro-business stance and his demand for tax reform. Today, he is a successful businessman and addresses Germany’s economic problems and solutions in clearly outlined speeches. For these reasons, many entrepreneurs favor Merz as the cdu’s next chancellor-candidate.

“This is Friedrich Merz’s hour. He can best fulfill the hopes from business—especially from family businesses,” Roland Mack, cofounder and managing partner of Europa-Park, told Die Welt.

A European Army and a Catholic Revival

Merz’s Roman Catholic faith guides his politics. Zeit Online noted that part of the reason Merz wouldn’t enter into cooperation with the far right is due to his religious beliefs. His faith is also reflected in his demand for a guiding culture that would orient itself with Christian values. He also supports fighting against the worldwide persecution of Christians.

In a contribution for Welt am Sonntag, he noted that there is a new “cultural struggle” for the future of the free liberal order. He also noted that the increased persecution of Christians around the world is “an attack on our freedom.”

Many religious leaders have previously drawn attention to these rising numbers of persecuted Christians. But it appears Merz would be willing to use military force to secure the lives of Christians in the Middle East and other places. Consider also that Merz is a strong proponent of a European army. On Oct. 25, 2018, he signed a letter alongside five other “leading German thinkers” that strongly endorsed a European Union army. Europe, he said, should “work toward the goal of a common European army”; Europeans “no longer need national armies.”

Discussion of a European army is yet another controversial topic that many politicians have avoided. Yet Merz is willing to discuss it. If he were to become chancellor, we could expect an emphasis on Germany’s Catholic roots and a push for a stronger European military.

When it comes to combating the Islamic State in the Middle East or building a European army, Merz thinks similarly to French President Emmanuel Macron. When it comes to a guiding culture and preventing the influx of refugees in Europe, he thinks similarly to Austrian Chancellor Sebastian Kurz. These three men also share the same Roman Catholic faith.

The history of the Holy Roman Empire shows that these factors have united Europe in the past. Motivated by the Catholic Church, European kings have united their armies to fight against Islamic invasions and other threats.

It is still very uncertain if Merz will replace Chancellor Merkel. But he’s certainly one we will be watching closely.

The Bible has a lot of critical prophecies about modern Germany. Merz could bring Germany closer to fulfilling these prophecies. As Trumpet editor in chief Gerald Flurry explains in The King of the South, Europe is prophesied to confront radical Islam.

Revelation 17 describes a beast—an empire in biblical symbolism—made up of 10 nations that share their power. This empire is led by a woman (verses 1-2), a church in Bible prophecy. This is why we forecast that the EU will become a 10-nation superpower, led by the Catholic Church.

Other scriptures describe a strongman, an overarching leader, who rules over the 10 kings. We believe that former German Defense Minister Karl-Theodor zu Guttenberg is a strong candidate to fulfill these prophecies.

In a Nov. 17, 2018, interview with the Austrian daily newspaper Kurier, Guttenberg said that he would like to see more European heads of government take a close look at, or follow the example of, Kurz. Concerning Macron, Guttenberg further said that Germany should finally respond to his visionary ideas for Europe.

Merz could help pave the way for the German strongman. He could even end up as one of the kings under this strongman. As Mr. Flurry noted in the Dec. 5, 2018, Key of David program, the overall leader could come to power as leader of Germany—ruling as one of the 10 kings. Or he could be an additional ruler, ruling over all 10 kings.

It remains to be seen how these prophecies will be fulfilled. But as we watch Germany’s leadership crisis, we ought to diligently study God’s Word. “Watch ye therefore, and pray always, that ye may be accounted worthy to escape all these things that shall come to pass, and to stand before the Son of man,” Jesus Christ admonished in Luke 21:36.

“Jesus Christ is about to reign forever, bringing peace and joy and happiness to all mankind!” Mr. Flurry said. “Watch vigilantly: The imminent arrival of this prophesied European strongman connects directly to this inspiring, fast-approaching reality!”

In whatever way this man comes to power, it is a sign that Jesus Christ is about to return to this Earth! These kings will cause great havoc on this Earth just prior to Christ’s intervention.

Realizing we are about to see the fulfillment of these prophecies ought to give us the urgency to turn to God and live our lives according to His laws. Order a free copy of Daniel Unlocks Revelation, by Gerald Flurry, to understand why God gives prophecies, how we can understand them, and where they are leading.