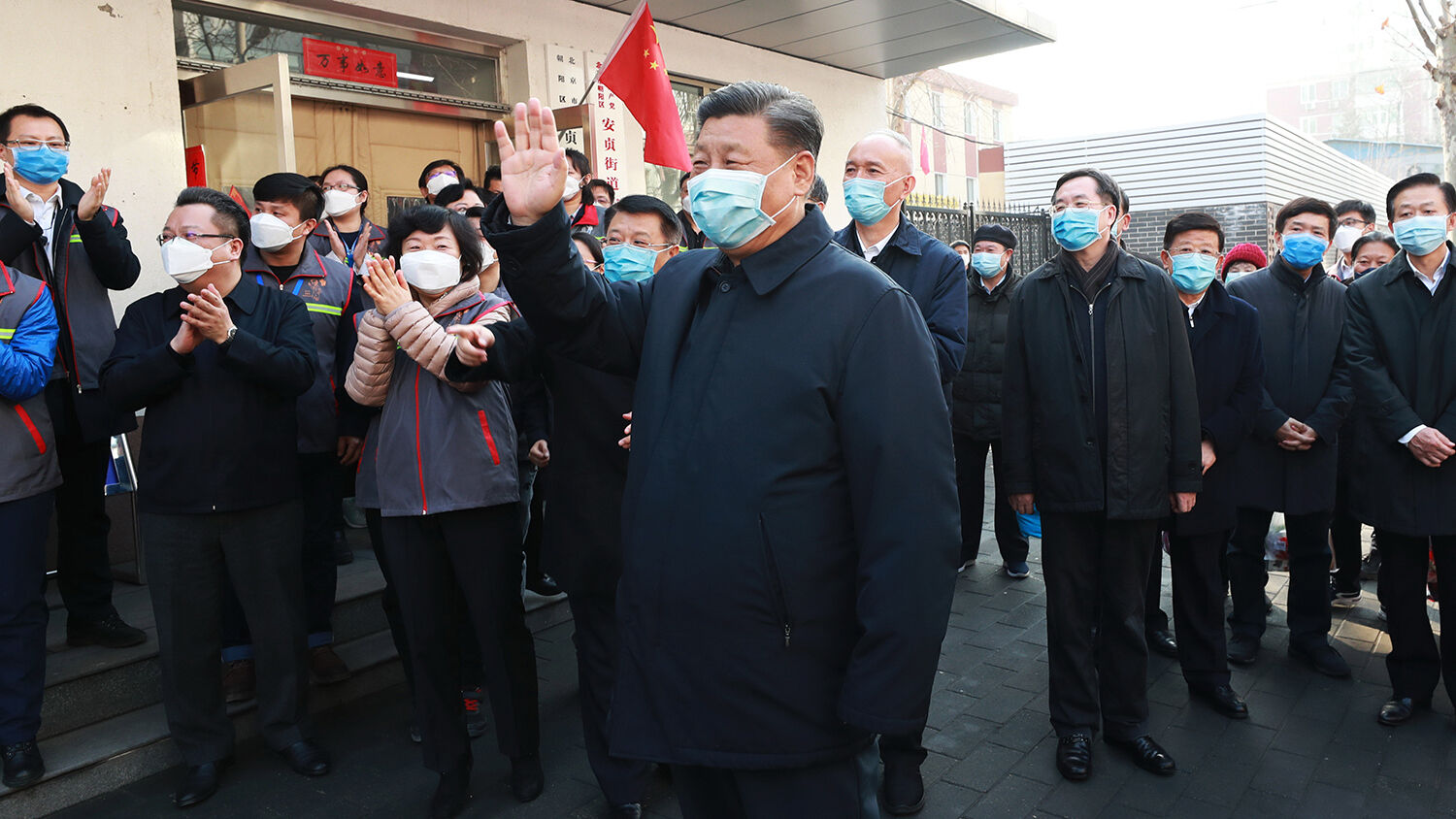 The expanding pandemic is the worst crisis the Chinese Communist Party has faced since 1989. It could work toward shifting the global power balance in a way that the Trumpet has been expecting.

The axis that Xi Jinping’s China has forged with Vladimir Putin’s Russia stands out as one of this century’s defining geopolitical developments. The two nations have grown as thick as thieves in their push against America’s global influence, with a level of cooperation that is now routinely called “revolutionary,” “game-changing” and “an alliance in all but name.” Due to China’s colossal economic, political and military power, analysts have generally seen China as the lead player in the dynamic, and Russia as the junior partner. But events now underway could weaken Xi and China, and lift Putin’s Russia to the helm of the partnership.

Even before the Wuhan coronavirus, Xi Jinping had been under acute pressure from several directions: His tightening grip on Hong Kong pushed the region to open rebellion that he can’t suppress; his human rights abuses of Chinese Muslims provoked the ire of Europeans and Americans; African swine fever killed two thirds of China’s most important meat and sent all the nation’s protein prices soaring; his efforts to squeeze Taiwan into submission propelled President Tsai Ing-wen to a landslide win on a platform that directly opposed Xi; and his defiance of international trade law and failure to manage United States President Donald Trump prompted China’s largest customer to wage a tariff fight that took a considerable bite out of the Chinese economy.

These all placed serious strain on Xi. Yet they pale in comparison to the new strain of coronavirus that broke out in central China late last year.

Official government data says that as of Tuesday morning, the covid-19 or Wuhan coronavirus has infected more than 70,500 people across the country and killed more than 1,800. And a mounting body of evidence shows that the Chinese Communist Party (ccp) is downplaying the true scope of the disease. For example, all seven of Wuhan’s crematoriums have been running in recent weeks at 24 hours per day, seven days per week—far longer than would be needed to accommodate the published body count. A study published in the well-regarded Lancet calculates that the ccp is downplaying the numbers by a factor of 10.

Whatever the true figures turn out to be, the economic impact has been profound: Chinese factories by the thousand have ground to a halt or have remained closed for longer than planned after the Chinese New Year. Port activity on China’s coast has shrunk by 20 percent since mid-January. And two thirds of the overall economy remains shutdown, including more than 80 percent of manufacturing.

The Economist Intelligence Unit has lowered its 2020 gross domestic product forecast for China by half a percent to 5.4 percent. That amount may not sound momentous, but last year alarms were sounded when China’s gdp growth slowed to 6 percent, the lowest in nearly 30 years. And the 5.4 figure is based on the assumption that the virus will be controlled by the end of March—a reasonably big “if.”

Xi Jinping’s unwritten contract with China’s 1.4 billion citizens says if they give him complete political control, he will make them wealthy and build China into a superpower. But now growth is slowing and increasing numbers are desperate, especially among the 50 million residents in the quarantined areas. Some in Hubei province, where most factories are closed, have risked their lives to paddle across the Hanjiang River that separates them from the non-quarantined city of Xiaogan, where they hope to earn a few yuan to feed their families.

There is real desperation and suffering. And many Chinese are coming to see that a portion of it is the result of Xi’s focus on self-preservation and “saving face” at all costs.

Xi’s ccp has detained journalists covering the story, arrested citizens who post about its true scope online, and it dispatched a senior medical expert from Beijing to Wuhan to publicly proclaim that the virus was “preventable.” The expert ended up contracting it and became an icon of the ccp’s ineptitude and dishonesty.

Most glaringly, in the early days of the virus, rather than giving medical experts in Wuhan, such as Dr. Li Wenliang, a platform from which to warn the country of the potential for an outbreak, the ccp silenced them. After Li posted a warning on the Twitter-like Weibo about an odd new pneumonia-like illness that didn’t respond to usual treatments, officials knocked on his door and strongarmed the 33-year-old father of two into signing a statement saying his warning was “false” and “seriously disturbing the social order.” At least seven other doctors who tried to sound the alarm were forced to sign similar confessions.

But it wasn’t false. And Dr. Li succumbed to the disease on February 7, sending shock waves through China and filling Weibo and other Chinese social media with outpourings of anger toward the government. “We want freedom of speech” became the hashtag of the hour, with numbers that overwhelmed China’s notorious armies of online censors.

In light of such events, more Chinese see that Xi and the ccp prioritize their own survival above that of the people. And public trust in the ccp has diminished.

The Financial Times recalled on February 10 that in earlier chapters of Chinese history, events like disease outbreaks, enemy invasions and internal rebellions against an emperor were seen as “ominous portents” that the leader was losing the “mandate of heaven”—and that the end of his dynasty was close. “[I]f the heavens were seen to be displeased,” it wrote, “the right of the populace to rebel was implicitly guaranteed.” And such rebellions led to numerous revolutions.

Perhaps more threatening to Xi than losing the confidence of the general populace is losing that of the cadre of leaders just below him. Writing for Geopolitical Futures on February 4, George Friedman said it is unlikely that these men see China’s multiplying problems without losing some faith in their president. “The Central Committee is packed with Xi supporters, of course,” he wrote, “but a situation like what has developed must cause concern and generate ambitions.” The notion that Xi’s ccp comrades remain “content” with his handling of the various crises is, Friedman wrote, “the least likely situation.”

Maybe the Wuhan coronavirus will soon be contained, and the Chinese economy will bounce back and Xi will be able to pin the dragon’s share of the blame on some of his underlings. But even in a best-case scenario, he would not emerge from this crisis entirely unscathed.

This is significant because the Trumpet has been expecting a decline in Xi’s power relative to that of his fellow strongman in Russia. Trumpet editor in chief Gerald Flurry has identified Vladimir Putin as the man who will lead an end-time Asian military force that Bible prophecy calls “the kings of the east” (Revelation 16:12) and says will have a force of 200 million soldiers (Revelation 9:16).

In his booklet The Prophesied ‘Prince of Russia,’ Mr. Flurry shows that Ezekiel 38:2 describes the leadership of this Asian bloc: It will be led by “the prince of Rosh, Meshech, and Tubal” (New King James Version). Meshech and Tubal, he explained, are early names corresponding to modern Russian cities, and Rosh is a variation of an ancient name for Russia.

The verse also mentions “the land of Magog,” which includes modern China, as being a part of the power bloc. But it makes clear that it will not be a Chinese leader but a Russian one who is the primary king, or prince, over this “kings of the east” conglomerate. “We need to watch Vladimir Putin closely,” Mr. Flurry writes. “I believe he is almost certain to be the ‘prince of Rosh’ whom God inspired Ezekiel to write about 2,500 years ago!”

The path the Wuhan coronavirus takes next could determine how soon and to what degree the power of Xi Jinping and China will be reduced. Meanwhile, Russia is virtually untouched by the disease and Putin has just set a plan in motion designed to let him rule Russia—with increasing influence over its neighboring nations—for as long as he lives. The power balance in the Russia-China axis is shifting.

To understand more about the kings of the east power bloc that is coming together mainly under Russian leadership, order your free copy of The Prophesied ‘Prince of Russia.’