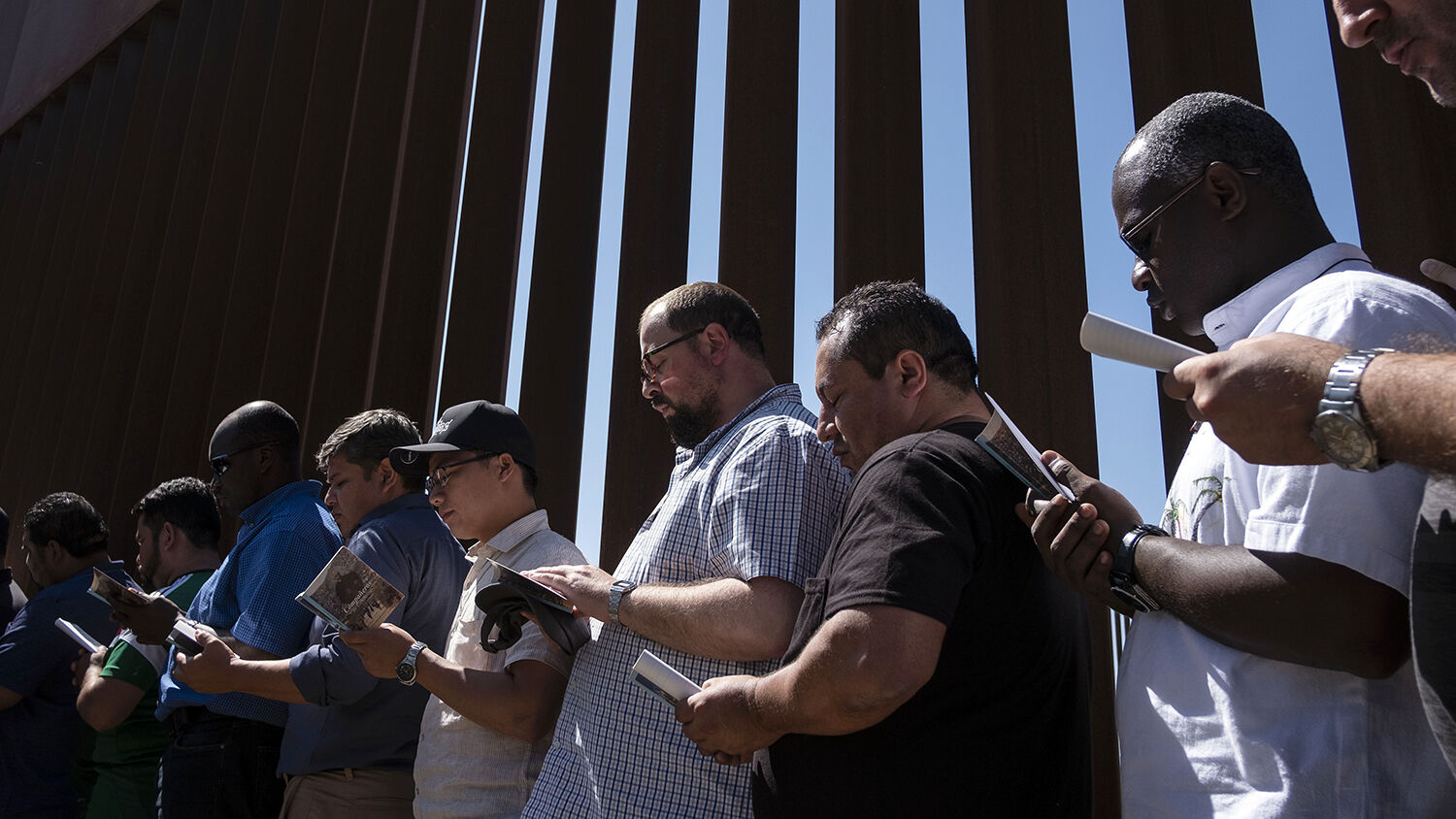 Catholic priests of Saint Charles Missions from Latin America, the U.S. and Canada gather to pray at the U.S.-Mexico border fence in solidarity to migrants and against hate and indifference on July 4, 2019.
GUILLERMO ARIAS/AFP via Getty Images

Why is Pope Francis promoting bishops who support illegal immigration?

Pope Francis is working to create a more Hispanic church in the United States. When Archbishop Charles Chaput retired on January 23, the pope appointed Nelson Perez to be the next archbishop of Philadelphia. While Chaput was regarded as a conservative leader among U.S. bishops, Perez is more progressive. The Cuban-born archbishop will also be the first Hispanic to lead the 1.3 million Catholics of the Archdiocese of Philadelphia.

Archbishop Perez will undoubtedly be a strong ally of Archbishop José Horacio Gómez of Los Angeles. Since November 12, Gómez has been the president of the U.S. Conference of Catholic Bishops. The Mexican-born prelate has long been a vocal critic of U.S. President Donald Trump. Two days after Mr. Trump was elected as America’s 45th president, Gómez delivered a homily saying, “We have children in our schools who are scared. They think the government is going to come and deport their parents any day now.”

In the months since this homily, Gómez has advocated for policy reforms that would create a path to citizenship for Hispanics living illegally in the United States. Yet his advocacy for illegal immigrants is not motivated purely by humanitarian reasons. In an Angelus article in 2011, Gómez laid out a plan to transform American culture by encouraging immigration.

After listing political and economic problems, Gómez wrote, “Immigration is a key to our American renewal.” A little later in his article, he explained his rational: “The American story that most of us know is set in New England. It’s the story of the pilgrims and the Mayflower, the first Thanksgiving, and John Winthrop’s sermon about a ‘city upon a hill.’ It’s the story of great men like Washington, Jefferson and Madison. It’s the story of great documents like the Declaration of Independence and the Bill of Rights. … But the story of the Founding Fathers and the truths they held to be self-evident is not the whole story about America. The rest of the story starts more than a century before the pilgrims. It starts in the 1520s in Florida and in the 1540s here in California. It is the story not of colonial settlement and political and economic opportunity. It’s the story of exploration and evangelization. This story is not Anglo-Protestant but Hispanic-Catholic. It is centered, not in New England but in Nueva España—New Spain—at opposite corners of the continent.”

Why does Gómez think that focusing on America’s Anglo-Saxon heritage is a problem?

“When we forget our country’s roots in the Hispanic-Catholic mission to the New World, we end up with distorted ideas about our national identity,” he wrote. “We end up with an idea that Americans are descended from only white Europeans and that our culture is based only on the individualism, work ethic and rule of law that we inherited from our Anglo-Protestant forebears. When that has happened in the past it has led to those episodes in our history that we are least proud of—the mistreatment of Native Americans; slavery; the recurring outbreaks of nativism and anti-Catholicism; the internment of Japanese Americans during World War ii; the misadventures of ‘manifest destiny.’”

Gómez is grossly misrepresenting history and ignoring the Holy Roman Empire’s role in the downfall of the Inca empire and the establishment of the trans-Atlantic slave trade. He is attributing the great “sins” of U.S. history to the nation’s “Anglo-Protestant” forebears and saying that the path to “American renewal” lies in “Hispanic-Catholic” culture. He is trying to resurrect a clash between the British Empire and the Holy Roman Empire.

When you understand the ultimate goal of the Vatican is to bring America under its political influence, attempts by Pope Francis and Archbishop Gómez to encourage Hispanic immigration into the U.S. take on a whole new meaning. About 40 percent of U.S. Catholics are Hispanic, and San Diego Bishop Robert McElroy has stated that mass deportations of illegal immigrants could remove 10 percent of Catholic parishioners from U.S. churches.

Without illegal immigration, the Roman Catholic Church would be a shrinking, aging organization with diminishing influence in the U.S. Immigrants moving into the country give Catholic leaders enormous influence they wouldn’t otherwise have.

According to a paper by the Vienna Institute of Demography, Catholicism will overtake Protestantism to become the largest religion in the U.S. by the middle of the century if immigration doubles. This at least partially explains why Pope Francis is elevating Hispanic bishops willing to take a stand against President Trump’s immigration policies.

The pope and the U.S. Conference of Catholic Bishops oppose any efforts to crack down on illegal immigration into America. They put forward humanitarian reasons for doing so, but there’s no denying that they benefit too. These migrants are overwhelmingly Catholic, and help make the U.S. a more Catholic nation.

Astonishingly, this strategy was foretold in the Bible.

Both Revelation 17 and Isaiah 47 refer to the combined religious and political power of a great false church. The church known as “Mystery, Babylon the Great” in Revelation is referred to as the “daughter of Babylon” and the “lady of kingdoms” in Isaiah. This church will rule over a union of 10 nations in Europe. And because God is angry with the modern descendants of ancient Israel for their sins, He turns them over to this religious power, which carries them away captive and shows them no mercy.

Herbert W. Armstrong explained in his landmark book The United States and Britain in Prophecy that the modern descendants of ancient Israel are primarily the U.S. and Britain. So the prophecies in Revelation 17 and Isaiah 47 are about a European superpower, dominated by religion, conquering the U.S. The Vatican is currently using the U.S. Conference of Catholic Bishops to oppose the Trump administration and help Hispanic Catholics from Latin America settle in the U.S.—legally or illegally. This is part of the Vatican’s strategy to blot out the name of Israel from under heaven (2 Kings 14:27).

God is not against Hispanics, and many Hispanic Americans have integrated into America’s Anglo-Saxon political culture. But unregulated Catholic immigration into the U.S. is not going to solve the problems of Anglo-America or Latin America. Instead, it is going to lead to clash of civilizations between the United States and a Vatican-dominated empire.

It is important to recognize that Pope Francis and the U.S. Conference of Catholic Bishops are actively working to establish a new system of world government. The Roman Catholic Church doesn’t believe the Kingdom of God is a literal kingdom to be established on Earth by Jesus Christ at His Second Coming. The Catholic Church’s position is that the Kingdom of God is a modern-day church, ruled by the vicar of Christ. The policies being espoused by the Trump administration—and deeply American principles much, much older—are completely at odds with the globalist vision of the Roman Catholic Church. The Catholic Church and the U.S. are fundamentally part of two different power blocs!

To learn more about what the Bible reveals about this Vatican-dominated empire and the role it will play during the years immediately preceding Jesus Christ’s return, request your free copy of Who or What Is the Prophetic Beast? by Herbert W. Armstrong.