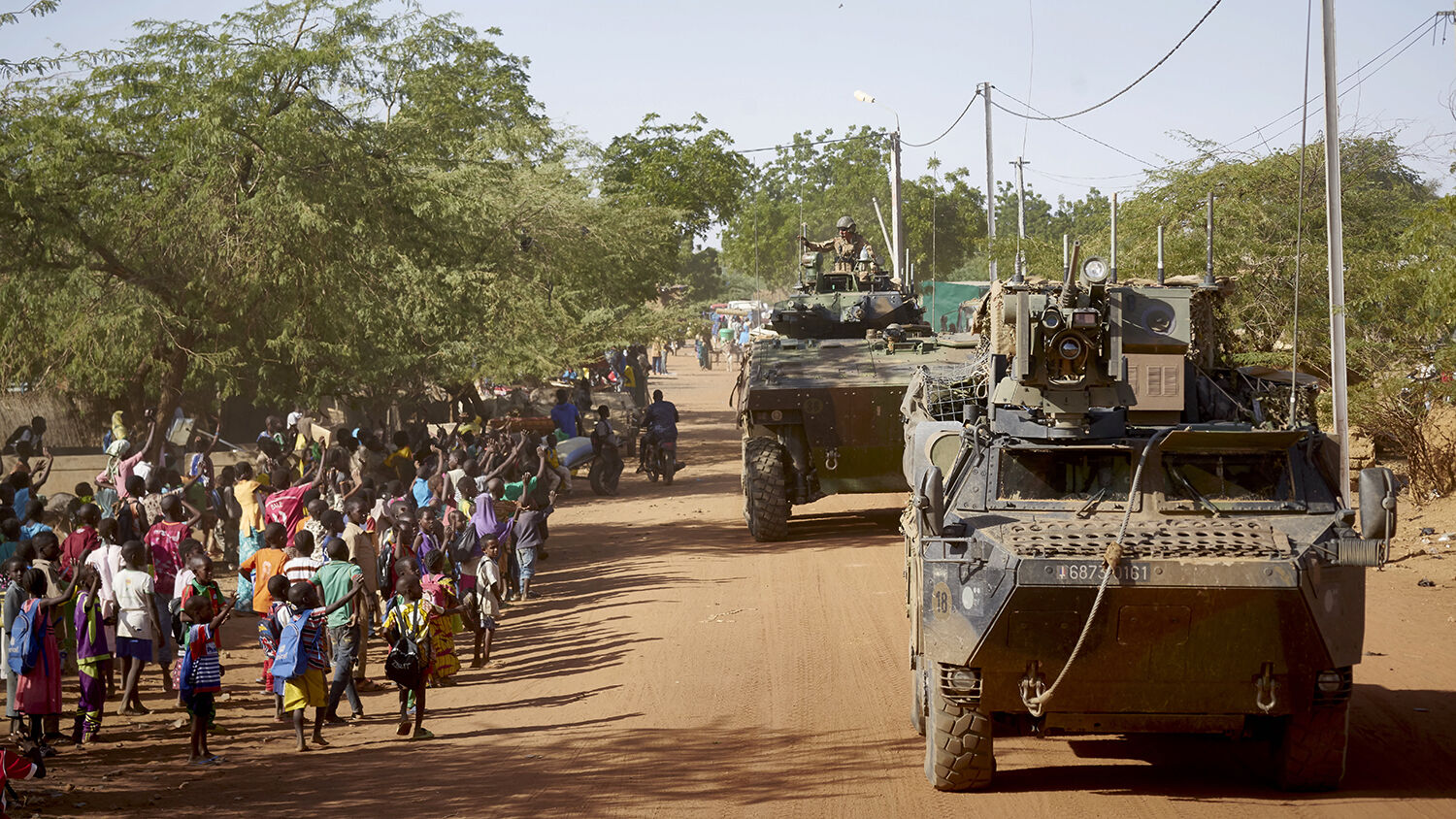 Soldiers of the French Army patrol the village Gorom Gorom in Armored Personnel Carriers during the Barkhane Operation in northern Burkina Faso on Nov. 14, 2019.
MICHELE CATTANI/AFP via Getty Images

The response to increasing radical Islamist attacks is only a foretaste of what comes next.

Africa’s most war-torn region is about to receive more European soldiers. French President Emmanuel Macron met with the leaders of Mauritania, Mali, Niger, Burkina Faso and Chad on February 3 in Pau, France, to discuss and implement a new legal framework for their mission in the troubled Sahel region.

The “Coalition for the Sahel” will bring 600 more French soldiers to the region. Originally, Macron planned to send only 220, but he revised the number a short time later. French General François Lecointre told Le Monde that this establishes “permanent action on the ground, 24 hours a day and seven days a week.”

This coalition exists for the same purpose but has expanded legal and military powers. It swallows up all previous and future missions under the name of the “Coalition for the Sahel.” The G5 Sahel force, France’s Operation Barkhane, and a special forces group planned for the future are all included under the umbrella of the new coalition.

Besides increased military presence, the new mandate expands the distance coalition forces will be allowed to travel inside the borders of neighboring countries. This has been increased from 50 kilometers (31 miles) to 100 kilometers (62 miles), giving greater scope to forces tasked with eliminating the terrorists.

The meeting between Macron and Sahel leaders came only one day after terrorists of the Group for the Support of Islam and Muslims, an al-Qaeda affiliate, killed at least 20 police officers in Mali. Increasing attacks in the Sahel region over 2019 have shown Macron that the Sahel needs to be dealt with more powerfully.

France will continue increasing its power throughout North Africa to counter Islamic extremism. Eventually, France will not be the only nation involved. More European nations, especially Germany, are going to get involved in directly confronting radical Islam. Much European power is already in the region.

“Northern Africa is turning into a battleground with enormously important prophetic implications,” wrote Trumpet editor in chief Gerald Flurry in the April 2013 Trumpet issue. “Germany has great power in Africa—even military power—that few people are paying attention to. Germany is not about to give that power up, certainly not without a fight.”

Since 2013, terrorism has grown exponentially in the Sahel. Europe’s involvement has also grown significantly.

Sahel nations are gateways to Libya and Algeria, where oil fields are vulnerable unless the volatile Sahel extremists are contained. Stopping the spread of terrorism here protects Europe’s energy interests and its domestic security.

Europe will not stop at confronting extremists in the Sahel. Bible prophecy shows that a much larger clash between Europe and radical Islam is coming. A clash that will take the battle to the head of the terrorist snake.

Watch the proliferation of radical Islam in the Sahel, and watch Europe get more involved. Mr. Flurry wrote:

The reason this is so significant is that these two powers are prophesied to clash in the end time. Daniel 11:40 speaks of a war between “the king of the south,” which we can prove to be Iran and radical Islam, and “the king of the north,” which we know to be Germany leading a group of nations.

Daniel 11:40 states, “And at the time of the end shall the king of the south push at him: and the king of the north shall come against him like a whirlwind, with chariots, and with horsemen, and with many ships; and he shall enter into the countries, and shall overflow and pass over.” The king of the north is a German-led European superpower. It will clash with Iran, the world’s largest state sponsor of Islamic terrorism. This verse describes a “whirlwind” attack on Iran and radical Islam. It will radically alter the balance of power in the Middle East, and eventually, the entire world.

Terrorism in the Sahel region is one way Iran pushes at Europe. Your Bible says that Europe will soon enter an all-out war against radical Islam led by Iran.

How will these events change your world, and what comes next for Europe’s war on terror? Read The King of the South, by Gerald Flurry, to learn more.